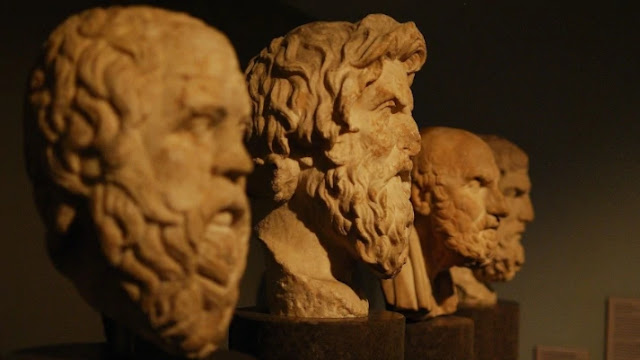 Aristotle was a Greek philosopher and polymath during the classical period in ancient Greece. Taught by Plato (one of the greatest philosophers of ancient Greece). He was the founder of the Peripatetic School of Philosophy, the Lyceum, and the Aristotelian tradition.

He was also the author of a scientific and philosophical system that became the framework and vehicle for both Christian scholars and medieval Islamic philosophy.

Many scientists still consider him one of the greatest thinkers in psychology, ethics, and politics. When Aristotle was at age 17, he enrolled in Plato’s Academy. In 338, he began teaching Alexander the Great.

In 335, He founded his own school, the Lyceum, in Athens, where he spent most of his life studying, teaching, and writing.

Why Aristotle famous for?

Aristotle was one of the greatest philosophers to ever live and the first real scientist in history. He made pioneering contributions to all areas of science and, philosophy. He invented the field of formal logic, and he identified various scientific disciplines and explored their relationships with each other.

He also made significant contributions to logic, criticism, biology, psychology, rhetoric, physics, mathematics, ethics, and politics. He was a student of Plato for twenty years but is famous for rejecting Plato’s theory of forms.

Some of his most notable works include Nicomachean Ethics, Poetics, Metaphysics, Politics, and Prior Analytics.

Aristotle was born around 384 BC in Stagira, a small town on the northern coast of Greece that was once a seaport. His father, Nicomachus, was the personal physician of Macedonian King Amintas III and the grandfather of Alexander the Great. Although Nicomachus died when He was just a young boy.

When He was young, he learned about medical information and biology, which was taught by his father.

Little is known about his mother, Phaestis; It is also believed that she died when He was young. After the death of his father in 367, Aristotle moved to Athens, where he joined Plato’s academy. He lived there for 20 years as a disciple of Plato.

Plato died in 347 BC. Aristotle disagreed with some of Plato’s philosophical texts, so He did not inherit the position of director of the Academy, as many had imagined.

Aristotle then accompanied Xenocrates to the court of his friend Hermias of Atarneus in Asia Minor. After Hermias death, He traveled with his disciple Theophrastus to the island of Lesbos, where together they researched the botany and zoology of the island and its sheltered lagoon.

Aristotle married Pythias, either Hermias’ adopted daughter or niece. She bore him a daughter, whom they also named Pythias. In 343 BC, He was invited by Philip II of Macedon to become his son Alexander’s teacher.

During his time at the Macedonian court, he taught lessons not only to Alexander but also to two other future kings: Cassander and Ptolemy.

By 335 BC, Aristotle had returned to Athens, establishing his own school there known as the Lyceum. He conducted courses at the school for the next twelve years.

While in Athens, his wife Pythias died and He became involved with Herpilis of Stagira, who bore them a son, whom he named after his father, Nicomachus. 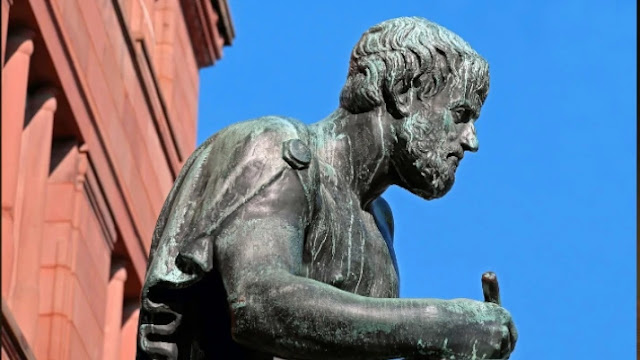 What discoveries did Aristotle make?

Aristotle made major significant and lasting contributions to almost every aspect of knowledge, from logic to biology to ethics and aesthetics. He wrote an estimated 200 works, most in the form of notes and manuscript drafts touching on logic, rhetoric, politics, ethics, science, and psychology. These include dialogues, records of systematic work, and scientific observations.

One of the many fields that Aristotle contributed to was what he called “natural philosophy”. He considered natural philosophy to be a theoretical science. He devoted most of his life to the natural sciences, contributing original research to physics, chemistry, astronomy, zoology, etc.

According to Aristotle, Science is possible only when there are things to be known. For example, there cannot be a Science of dragons, because dragons do not exist and therefore the science of dragons would lack knowable objects and thus would not be Science.

Aristotle composed on astronomy, including Earth science, and on the heavens, including meteorology. In meteorology, He identified the water cycle and discussed topics ranging from natural disasters to astrological events.

Aristotelian physics is the form of natural science described in the works of the Greek philosopher Aristotle. In his work Physics, He intended to establish general principles of change that govern all-natural bodies, both living and non-living, celestial and terrestrial – including all motion, quantitative change, qualitative change, and substantial change.

Aristotle explores human psychology in his book On the Soul. Many theories of modern psychology are based on his writings about how people see the world. His theory of the “Three Souls” would rule the field of psychology until the 19th century.

Aristotle‘s psychology included a study into the construction of the human mind, one of the first salvos in the debate between nature and nurture, which affects many academic disciplines, including psychology, sociology, politics, human geography, and education.

His theory of mental functions covers a range from nutritive and reproductive processes to abstract rationality. The different powers or abilities of the soul differ in different species. His theory of perception also emphasizes sensory integration, a process that is not itself sensory.

What is the most important book of Aristotle?

In his book Metaphysics, Aristotle clarified the distinction between matter and form. For him, the matter was the physical substance of things, while form was the unique nature of something that gave it its identity. In this book, He considers causality, form, matter, and even logic-based reasoning for the existence of God.

Aristotle‘s Nicomachean Ethics and Eudemian Ethics represent, in many ways, the Western classical springboard for the systematic study and implementation of ethics, the optimal behavior of the individual.

In Eudemian Ethics, He explores the factors that make life worth living. He considers the role of happiness, and what is involved in happiness, and he analyzes the various aspects that contribute to it: human agency, the relationship between action and virtue, and the concept of virtue itself.

In Nicomachean Ethics, happiness consists of having, over the course of a lifetime, all the goods—health, wealth, knowledge, friends, etc.

According to Aristotle, rhetoric is: “the ability to see, in each particular case, the available means of persuasion.” In this book, he describes three main forms of rhetoric: ethos, logos, and pathos. Rhetoric was developed by him during two periods while he was in Athens, the first when he was attending the Academy for Plato and the second when he was running his school, the Lyceum.

Aristotle proposed to study Poetics by analyzing the compositional parts and then drawing general conclusions. The remaining parts of poetry mainly deal with tragedy and epic poetry. He defines poetry as the use of imitation, or mimetic, language, rhythm, and harmony, either separately or in combination.

What are some famous quotes of Aristotle?

It is the mark of an educated mind to be able to entertain a thought without accepting it.

Happiness depends upon ourselves.

Patience is bitter, but its fruit is sweet.

Quality is not an act, it is a habit.

You will never do anything in this world without courage. It is the greatest quality of the mind next to honor.

The roots of education are bitter, but the fruit is sweet

Courage is the first of human qualities because it is the quality which guarantees the others.

The aim of art is to represent not the outward appearance of things, but their inward significance.

The aim of the wise is not to secure pleasure, but to avoid pain.

What are the facts about Aristotle?

1: He was the first real scientist in history. Every scientist is in his debt.

3: His works include the earliest known formal study of logic, which was incorporated into modern formal logic in the late 19th century.

4: After the death of Nicomachus, Proxenus – the husband of Aristotle‘s sister, Arimneste became the guardian of the young Aristotle.

5: He had some really great ideas. However, he also had some that have not aged properly.

6: He had a close relationship with Plato and was one of his favorite students.

8: In 338 BC, He returned to Macedonia. There he began teaching the son of King Philip II.

9: He is considered the founder of the Peripatetic school of thought as well as the Aristotelian approach to philosophy and science.

10: Aristotle‘s works were mere lecture notes, passed through the centuries. They weren’t even meant to be published.

11: It is believed that to honor his son, He named his most famous philosophical work the Nicomachus Ethics.

12: His works influenced many religious philosophies in Judaism, Christianity, and Islam.

13: On some occasions, Aristotle acted as a mediator to defuse tensions between Macedon and some Greek cities.

14: He was also an ardent believer in Eudaimonia. The word means happiness. And he considered it to be a good soul which can be attained by developing the mind and leading a moral life.

15: For centuries, he was commonly referred to as “the man who knew everything” or “the philosopher”.

Aristotle died in 322 BC (aged 61–62) of a digestive complaint in Euboea, the Macedonian Empire. He asked to be buried next to his wife, who had died a few years earlier.

Near the end of their lives, Alexander and Aristotle parted ways over Persia and Alexander’s relationship with the Persians. A widespread tradition in antiquity suspected Aristotle to have played a role in Alexander’s death, but the only evidence for this is an unlikely claim made about six years after his death.

So these are enough for today. Comment what is your opinion about Aristotle. Thanks for reading. 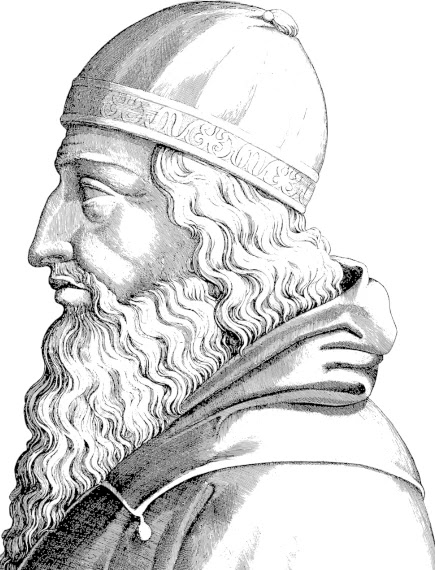