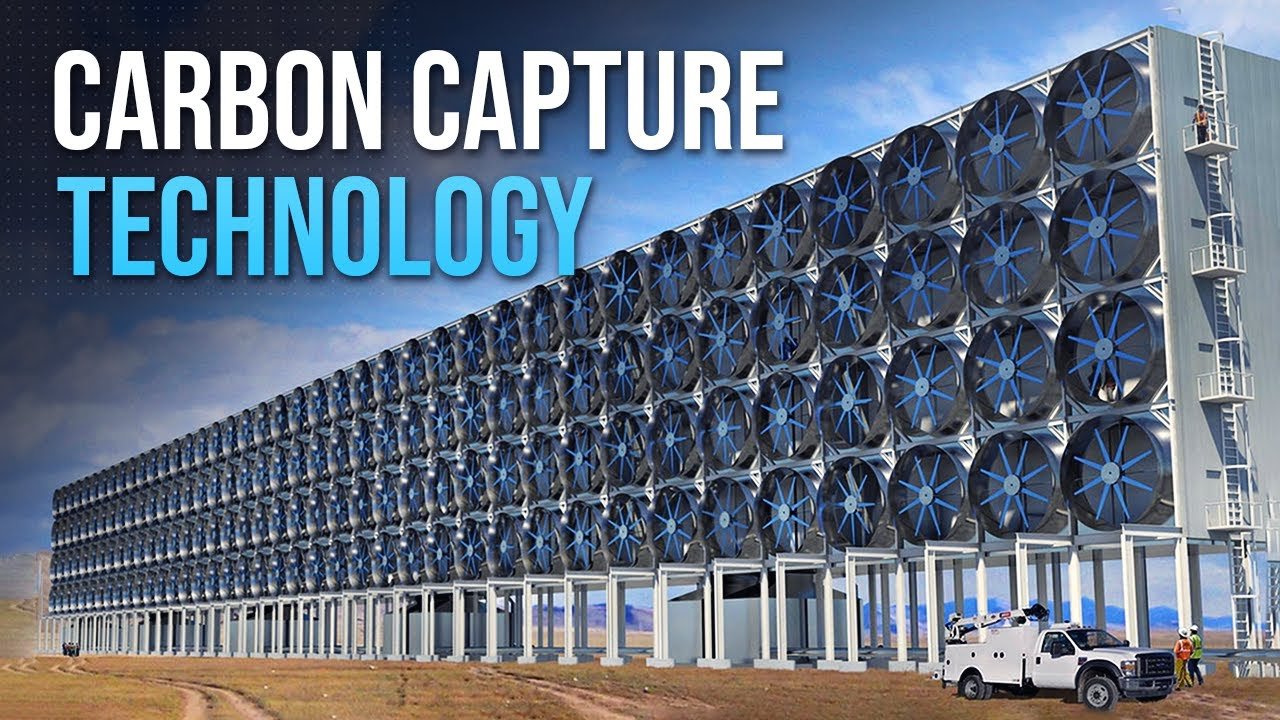 Can Carbon Capture Save Our Planet?: Either you believe that man-made climate change is a nightmare for civilization, or you lack basic critical thinking skills and you’re about to write something blurry in the comments.

Whatever the case, let’s at least agree that mankind is dumping a lot of carbon into the atmosphere. Not convinced? Here are some numbers. Before the Industrial Revolution, Earth’s atmospheric carbon dioxide concentration was around 280 parts per million.

If we want to keep our planet habitable, respected climatologists all agree, we need to keep that number below 350 parts per million, tops. Anyway, since you ask, this year we are going beyond 420. Good. Except, no.

Of course, we all know that lower carbon dioxide emissions would help avoid a catastrophic runaway greenhouse effect that would, in turn, destabilize ecosystems, disrupt food supplies and prompt a historic global refugee crisis. But what if there is a way to remove the carbon that is already there, which is setting the clock back?

Join us today as we eagerly look up to the skies and ask: Can carbon capture save the planet?

Carbon dioxide, CO2, can be removed from industrial emissions at the source—say, the belching chimney of a coal-fired power station—before releasing it into the atmosphere. This so-called ‘flue gas’ approach is already in use at select facilities, such as the Boundary Dam coal-fired plant near the city of Estevan in Saskatchewan, Canada.

This specific process, which employs refined ammonia-based chemistry, successfully captures approximately one million metric tons of C02 each year, or 90% of the Saskatchewan plant’s emissions. The downside is that the equipment to do so costs $1.3bn.

The other type of carbon capture is far more exciting and is named DAC, or Direct Air Capture. The DAC employs huge banks of fans, which largely suck up the carbon already emitted from the ambient atmosphere.

This technology is very promising but has not yet been implemented on any useful scale. More on those soon, after we touch on what exactly needs to be done with that carbon, either via flue gas extraction or stripped to thin air.

With CCU the carbon is actually recycled and put to good use, for example as a raw material or feedstock. This sounds great, but in itself raises a lot of questions.

Let’s look at some of the CCS – Carbon Capture and Storage – initiatives happening right now. Northern Lights is a highly ambitious project being carried out in collaboration between oil giants Shell, Total, Equinor, and the Norwegian government.

The idea is that emissions from industrial flue-gases would be removed from factories across Norway – eventually across Europe – and carried pipelines to a coastal terminal in Oygarden on the North Sea coast.

From there, specially designed ships will carry the toxic CO2 waste to the ocean, where it will be dumped into storage reservoirs 2,600 meters below sea level.

The first project of its kind to be tried on a large scale, Northern Lights has promised that it can initially store 1.5 million tonnes of C02 a year, which should be increased to five million tonnes per year as a model – CCS as a Service, in fact – proves its efficacy.

We’ll see, anyway, when it’s up and running in 2024. If you can’t wait that long, another very exciting carbon capture and storage scheme called Orca comes on stream in Iceland this September.

Envisioned by Swiss startup ClimeWorks, the Orca captures its carbon via futuristic direct air capture, essentially driving giant banks of fans that suck the C02 into clever filters, which are then secured under the rugged Icelandic landscape. It is heated to separate the contaminant before being pumped into basaltic rocks.

The question is, where do we remove the CO2 with certainty for the problem of carbon capture.

Basalt rocks are ideal, not only because they are so common, but because CO2 reacts with basalt’s naturally abundant magnesium and calcium, turning the unusable element into solid minerals such as dolomite, calcite, and magnesite. Is.

If the end result is rock solid, the theory goes, it’s also going to be stable, and won’t be disturbing the atmosphere and expanding society any time soon. Oil and gas reservoirs, the type the Northern Lights seek to use to hide CO2 beneath the North Sea, are similarly helpful.

They are obviously porous and can store a lot. We know this because this is where we have been burning oil and gas for more than a century. There is no dearth of underground space.

In fact, research shows that the United States alone has enough subsurface capacity to store about 10.8 trillion tons of stuff.

Concerns naturally arise around contamination of underground watercourses, but in most cases, deep brackish groundwater systems that are at risk are not part of the drinking water system anyway.

For a long time, by chance, scientists contemplated dumping C02 into the deep ocean. At sufficient depth, carbon dioxide is denser than water, so it must remain in its place indefinitely.

However, there’s no telling what it might do to delicate marine ecosystems, and the somewhat unpredictable nature of powerful ocean currents makes it a bit sketchy.

Far more exciting, there is the potential for the CCU – remember, that is carbon capture and utilization. A lot of clever people and startups are figuring out ways to use carbon, which is destined to float in the atmosphere as easy terrestrial products.

Grab the eye-catching H&M sunglasses crafted from CCU-based carbon-negative thermoplastics. Or Carpet Tiles by American firm Interface. ClimeWorks – them again – has figured out a way to reuse the captured atmospheric carbon as the gas that makes your drinks fizzy.

Australian company Mineral Carbonation International wants to use carbon in bricks, as part of the firm’s ambitious initiative to lock in one billion tonnes of C02 in its products by the year 2040, a safe source of carbon for at least a century. I Will store the whole bunch.

The biggest, saddest irony of Carbon Capture and Utilization is that, for now, its main commercial use is the big business of EOR or Enhanced Oil Recovery.

Under EOR, CO2 is pumped underground at drilling sites to help move precious crude oil reserves to the surface where they can be extracted more easily. If you’re feeling cranky about the sound of that, fair enough.

Somewhere around three-quarters of all underground carbon sequestration is under the name of EOR. That’s good, in that carbon that would otherwise wind up in the atmosphere is out of harm’s way, but obviously, it eventually leads to the burning of even more fossil fuels.

And we really need to move beyond that. Yet, perhaps encouragingly, the recent closure of a major EOR facility in Petra Nova, Texas, made EOR no longer financially viable after the oil price crash related to the pandemic.

In any case, it doesn’t really matter from an enhanced oil recovery standpoint whether the carbon used to pump the oil comes from recovered emissions or virgin mining carbon.

Which is certainly cheaper, and is secretly preferred by the oil giants. This leads us to the fundamental problem of increasing carbon capture schemes. For now, there is no major financial incentive for any bright young startup to develop and expand its technology.

Electric cars, and to a lesser extent solar panels, are a dazzling future technology that people are happy about. Elon Musk can become as rich as anyone who likes to sell fast cars.

But carbon capture is too monotonous, the benefits of which are only likely to be felt many years or even decades from now. It’s hard to get it off the market, and it’s hard to get excited about. It doesn’t have to be like this though. Carbon clearly has value. This is useful.

To meet the goal of the International Panel on Climate Change, removing 10 gigatonnes of C02 net from the atmosphere by the middle of this century, a huge industry needs to be built, and it needs to be built now.

The Northern Lights project off the coast of Norway is off to a promising start. ClimeWorks estimates that its roughly 80 million extraction units—which could be placed more or less anywhere on Earth, ideally near renewable sources of electricity—could make a significant dent in atmospheric carbon.

That sounds like a lot, but that’s roughly the number of cars already built each year. where there is a will there is a way.

In truth, carbon capture and utilization would only be a sideshow – most recycled carbon, for example, used in food or alternative fuels, would end up back in the atmosphere at some point anyway.

Current technologies on the drawing board, for example, apply molten electrolysis to alchemize recovered carbon into nanotubes that replace construction steel but are too speculative to rely on at this early stage.

So for now smart subterranean sequestration is the way forward. And with dizzying incentives on offer from any genius how to do so on a useful scale – not least our fellow Elon’s generous $100m Carbon-X prize fund – hopefully, the grubby profit motive will save our collective bacon.

Because as a civilization, we can’t really afford to remain an underground technology for carbon capture. what do you think Is there a better way to reduce atmospheric carbon and avert climate change? Tell us in the comments.

Thanks for reading till the end. Comment what’s your opinion about this information “Can Carbon Capture Save Our Planet?”.

2 thoughts on “Can Carbon Capture Save Our Planet?”