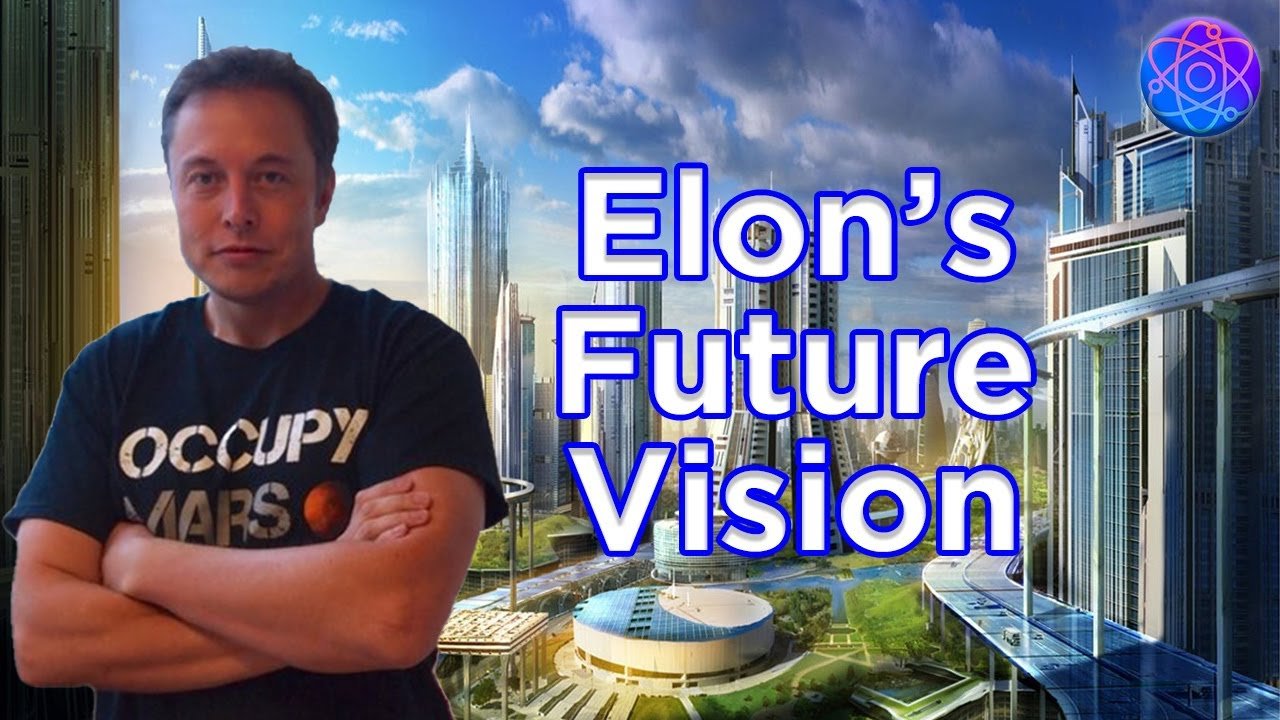 Elon Musk’s Crazy Visions of the Future: Elon Musk, a man of highly futuristic vision and of course, a meme lord. His long-term future plan is to make human civilization interplanetary. Elon’s other companies are also working on AI, super-fast travel on earth, and the unforgettable Tesla that aims to reach sustainability in the energy sector as quickly as possible.

Let’s discuss everything about “Elon Musk’s crazy vision of the future” in today’s article. Elon Reeve Musk is a business magnate, industrial designer, engineer, and philanthropist. He is the founder, CEO, and chief designer of SpaceX, CEO and product architect of Tesla, founder of The Boring Company, co-founder of Neuralink, and co-founder and early co-chairman of OpenAI.

Currently, his net worth is estimated to be around US$156 billion.

Let’s take a brief look at Musk’s business history. Elon co-founded Zip2, a web software company that was acquired by Compaq in 1999 for $307 million.

After this Elon Musk founded an online bank X.com. It merged with Confinity in 2000, which launched PayPal the previous year and was later bought by eBay for $1.5 billion in October 2002, and Elon made $180 million from the PayPal deal.

Now, let’s move on to Musk’s current companies and his outlook on them.

SpaceX was founded in 2002 by Elon Musk with the goal of reducing space transportation costs to enable the colonization of Mars.

SpaceX has many achievements and its technology is unprecedented in the rocket industry. The company is a leader in rocket booster landing and its reuse. The company’s near-future goal is to send humans to the Red Planet by 2024, but due to several pushbacks, it may be delayed by another 4 years.

And to accomplish this goal, they are making a rocket named “Starship”. According to the company, Starship is SpaceX’s fully reusable transportation system designed to carry both crew and cargo to Earth orbit, the Moon, Mars, and beyond.

Even NASA has selected SpaceX to develop a lunar optimized Starship to transport crew between lunar orbit and the surface of the Moon as part of NASA’s Artemis program.

Starship is said to be the world’s most powerful launch vehicle ever developed, with the capability to carry over 100 metric tons into Earth orbit. But the rocket has not yet launched any unmanned or crewed missions into space.

As of November 11, SpaceX has flown 20 cargo resupply missions to the International Space Station (ISS) as part of a partnership with NASA, mostly with the Falcon-9, as well as a crewed mission to the ISS with the rocket Falcon Heavy.

Another Crew Dragon mission to the ISS is scheduled for 14 November. A partnership with NASA could help SpaceX develop even better technology. SpaceX is not only about traveling in space and sending humans to Mars but also about giving everyone on Earth a better way to access the Internet.

The SpaceX Starlink satellite is a satellite Internet constellation providing Internet access that circles the Earth. In all, there are plans to deploy about 12,000 satellites, which can be scaled up to 42,000 later.

According to Forbes analysis, Starlink could be worth $30 billion by 2025.

Tesla Inc. is an American electric vehicle and clean energy company based in Palo Alto, California.

The company is accelerating the world’s transition to sustainable energy with electric cars, solar and integrated renewable energy solutions for homes and businesses. Tesla ranked as the world’s best-selling electric passenger car maker in 2019, with a market share of 17% in the plug-in segment and 23% in the battery-electric segment.

It is currently the most valuable car company in the world. Its total market cap is approximately $400 billion. Given the yield of gasoline-powered cars, Tesla cars are always the best for the environment.

The company is also giving us a new way to travel, which is Tesla Autopilot. It is already available in all Tesla cars but it is going to be more robust after the release of FSD or Full Self Driving in public. Not only this, Tesla cars have got a 5-star crash rating and are considered the safest. The company bought SolarCity in 2016.

Tesla’s vision with SolarCity is to build solar roofs that will generate sustainable energy from a roof that is more sustainable than a normal roof.

Neuralink Corporation is an American neuro-technology company founded by Elon Musk and others, which is developing implantable brain-machine interfaces (also known as BMI).

The headquarters of the company is located in San Francisco. It was launched in 2016 and was first publicly reported in March 2017. According to Bloomberg, since its founding, the company has hired several high-profile neuroscientists from various universities.

At the time, Neuralink announced that it was working on a “sewing machine-like” device capable of inserting very thin (4 to 6 micrometers in width) threads into the brain, and demonstrated a system that would The lab reads information from the pig through 1,500. electrode.

The company aims to implant wireless brain-computer interfaces in the most complex human organ to help heal neurological conditions such as Alzheimer’s, dementia, spinal cord injuries, and ultimately to connect the human race with artificial intelligence.

The Boring Company is an American infrastructure and tunnel construction services company founded by Elon Musk in December 2016. Musk cited Los Angeles traffic and limitations with the current two-dimensional transportation network as his initial inspiration for the project.

The Boring Company was initially formed as a subsidiary of SpaceX in December 2016 and then became a separate and completely independent company in 2018.

As of December 2018, 90% of the equity was owned by Elon Musk, with 6% held by SpaceX as a return for the use of SpaceX resources during the company’s initial startup. The company started out as a really fun project.

The company also sold the flamethrower under the name “Not a Flamethrower”. Of these, around 20,000 units were made and sold in just 5 days. The concept of the Hyperloop was also proposed by Elon Musk.

A hyperloop is a sealed tube or system of tubes with low air pressure through which a pod can travel free of air resistance or friction. Hyperloop can transport people at hypersonic speed while being very energy efficient.

This would significantly reduce travel times compared to trains and even aircraft over distances of less than 1,500 kilometers (930 mi). Their initial concept consisted of low-pressure tubes in which pressurized capsules ride on air bearings driven by linear induction motors and axial compressors.

At present, The Boring Company is digging tunnels to reduce the travel distance during traffic. The Preliminary Test Tunnel, located in Hawthorne, Calif., is being used for research and development of The Boring Company’s tunneling and public transportation systems.

In December 2015, Musk announced the creation of OpenAI, a non-profit artificial intelligence research company. OpenAI aims to develop artificial general intelligence in a way that is safe and beneficial to humanity.

By making AI available to everyone, OpenAI seeks to compete with large corporations that own dedicated super-intelligence systems for profit, as well as governments that use AI to gain power and even manage their own business. to torture civilians.

Musk once said that he wanted to counteract the concentration of power. In 2018, Elon Musk left the OpenAI board due to disagreements about the company’s development. So, we looked at all of Elon Musk’s companies and their future vision for them, apart from OpenAI, since leaving the company.

One thing is certain that if Elon continues to operate successfully, we are going to see much more development in the space industry as well as more developments in the way we interact with technology. If Neuralink is successful, we can expect an infinite flow of information directly between a world full of cyborgs and the human brain.

Starlink will change the way we connect to the Internet, such that you can go anywhere on Earth and get Internet coverage even in the middle of the ocean! SpaceX’s fast-paced innovation gives us confidence that we may very soon reach Mars and even travel between planets.

Tesla is trying to catch up on pollution as well as sustainability. In the end, it would be amazing if these things happen even by the end of our lifetime. Since Elon is doing so many things at once, these companies will make him even richer.

Thanks for reading till the end. Comment what’s your opinion about this information “Elon Musk’s Crazy Visions of the Future“.

3 thoughts on “Elon Musk’s Crazy Visions of the Future”