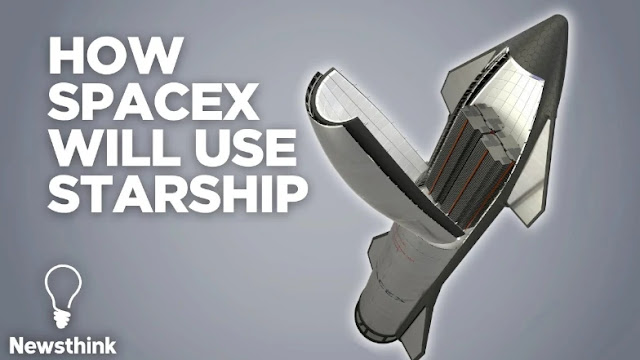 How SpaceX Gonna Use Starships

The Falcon 9 showed the world what SpaceX is capable of. This was the first time a private company had sent astronauts into orbit.

Since that mission in May, four more astronauts boarded for the first operational crewed flight, Crew-1. The Falcon 9 may have made headlines at SpaceX, but it’s just the beginning before the main show. Starship. SpaceX hopes to travel far beyond Earth on the world’s most powerful launch vehicle.

In December, a Starship prototype, serial number 8, took off from its launch pad in Boca Chica, Texas, flying higher than any of its predecessors — at an altitude of 12.5 kilometers, or 41,000 feet. So far, so good. But it was difficult to return.

Starship performed the belly flop maneuver. The unusual execution allows the Starship to better control the landing using its wings. It didn’t make much difference in this case as the vehicle had crashed. Musk gave the flight a one in three chance of success.

Despite the epic ending, it was still considered a success. Incredible work, team. Good work. Because Musk said that SpaceX has gathered all the data it needs. It is the farthest starship ever built.

The previous prototype only performed short hops of 150 meters. The only part that took off was the spacecraft, the second stage, which would eventually sit on top of the first stage to travel to space – a rocket known as the Super Heavy.

It is collectively called the Starship and is located at a distance of 120 meters or 394 feet. After the two stages separate, the Super Heavy descends vertically to Earth, while the Starship travels further to its destination, before arriving home.

What makes Starship special is that it is completely reusable. Falcon 9 on the other hand is only partially reusable. The booster returns. SpaceX envisions the Starship to be similar to an aircraft, with continuous flights and quick turnaround times.

It will have to fly hundreds of times without a crew, at least until takeoff and landing are complete. Then, it may be able to break out of the commercial airline industry by transporting passengers from one place on Earth to another.

The company envisions going from Sydney to Singapore in 31 minutes. From LA to Toronto in just 24. Boosters may not even be needed for shorter distances. The spacecraft could travel on its own, powered by 6 Raptor engines.

The prototypes that flew had three of those engines aboard. The Earth-to-Earth journey can be an easy milestone. But the real focus is far from that. No one has gone to the moon since 1972.

When NASA sends the next man and first woman back by 2024, it will have to decide which company will get them there. SpaceX has competition from both Blue Origin and Dianetics.

It wants to modify Starship for historic travel – it certainly doesn’t look like any sort of lunar lander we’ve seen before. Sending people to the moon is a big achievement in itself, but for SpaceX, it’s just a step, a chance to gain experience before achieving an even bigger dream.

It’s no secret that SpaceX is trying to get to Mars. “I am optimistic about the future on earth but it is important to have life insurance for life as a whole. Beyond the insurance policy, there is an even bigger reason”, which he talked about during a recent event in Berlin.

“We want a future that is inspiring and exciting. A future where we are a space-oriented civilization and among the stars. I think every kid gets excited about it. You also need to teach them is not needed”.

The dreams of humans inhabiting the Red Planet will depend on the rate of innovation of Starships. Musk hopes to have an unmanned mission to Mars by 2022. And he is highly confident that humans could get there in 2026 or possibly 2024.

100 passengers will prepare themselves for the six-month journey. As difficult as getting to Mars is, the real work begins when it arrives. Because a city needs to be built, especially if the vision is to have millions of people living there by 2050.

A fleet of one thousand starships will be charged for the challenging task. It would be an incredibly expensive undertaking, at least $100 billion but possibly trillions. SpaceX needs a boatload of cash. Or in this case, Shipload.

Its new satellite Internet service for Earth, called Starlink, is projected to bring in desperately needed funding of $30 billion a year. What a spectacular sight with the sunlight hitting those Starlink satellites.

The Falcon has been launching 9 satellites but it can only carry 60 Starlink satellites at a time. Since SpaceX wants to build a constellation of at least 12,000, that means about 200 flights.

And if the company wants to increase it to a full 42,000 in one day, 700 launches is no small feat. This is why SpaceX plans to use Starship to carry Starlink in the future. It can carry 400 instead of 60 satellites. Its payload capacity is 100 metric tons or about the weight of a blue whale.

Eventually, the satellites will also orbit Mars to provide internet to its new inhabitants. Musk hopes to be one of them.

Every step of his plan to live and be buried on Mars depends on the success of Starship. With rapid improvements, this beast of a vehicle will one day travel far beyond Earth. Or in the words of Musk: “Mars, here we come!!”

Elon Musk has a bachelor’s in physics and economics, but he actually learned about rocket science by reading books and talking to experts. He found a way that worked for him.

Thanks for reading till the end. Comment what’s your opinion about this information “How SpaceX Gonna Use Starships“.