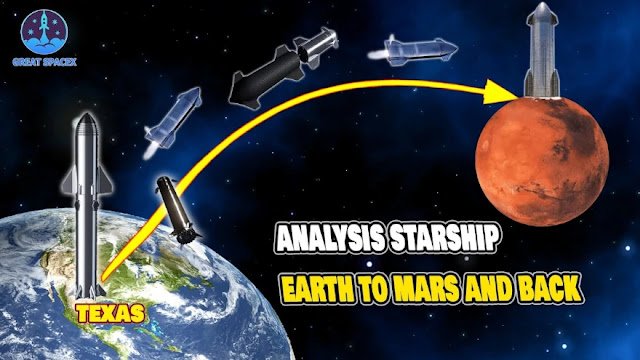 How will Starship complete its journey to Mars and back?: We’re no strangers to Elon Musk’s crazy idea of ​​going to Mars. Elon Musk said that he is confident that the first crewed flights to Mars will take place in 2026. A key element of the program is the SpaceX Starship plan to become a fully reusable super heavy-lift launch vehicle.

After six weeks of the assembly began, SpaceX gave a big surprise. SpaceX has completed the first true super-heavy booster prototype of the Starship and building-sized rocket on the launch pad last week.

SpaceX is gearing up for the most ambitious test flight ever of its Starship Mars rocket this year. We’re getting closer and closer to Mars but how will SpaceX’s Starship actually get to Mars and back.

The Starship spacecraft and super-heavy rocket will form a reusable transportation system capable of refueling on the surface of Mars in orbit and taking advantage of Mars’ natural resources.

Musk has claimed that he expects to be able to have the vehicle ready for another launch within just 24 hours. That’s the rocket equivalent of a pit stop of six seconds. They will be extremely busy cleaning, inspecting, and maintaining all rocket parts 24 hours a day before another launch the next day.

Starship and Super Heavy are going to use liquid methane and oxygen or methanolic as a fuel source for their giant Raptor engines. They chose this particular fuel for a number of reasons because of its minimal wear cost on the rocket’s tanks, but most importantly, for its ability to harness elements of the Martian atmosphere.

The Starship launches with the super-heavy booster, the booster then separates returning to Earth. It will be held by the launch tower arm, using the grid fin to take the load. SpaceX has now almost completed this massive tower and is ready for its mission.

The crewed ship would spend all of its fuel on its journey to Mars, mostly to leave the Earth’s gravity well in the initial escape. But also some minor trajectory adjustments along the way to fine-tune the encounter with the Red Planet.

The starship enters Earth orbit while a refilling tanker is launched to rendezvous with the starship in orbit. The tanker ship Starship Refueling docks with the Starship and returns to Earth.

The crew in orbit will now have a full tank of fuel enough to assist them in deep space. After the journey, it will begin its journey from Earth’s orbit around the Sun and onwards to Mars.

Starship will enter very fast, moving at a speed of seven and a half kilometers per second. Something like a heat shield for Mars would be different like the brake pads going away. It’s a multi-use heat shield, but unlike Earth operations coming in so hot that you’ll actually see the heat shield somewhere, the crew will eventually pinpoint their exact landing location and begin the final descent for most of the flight.

The starship would fall like a skydiver that uses its wings to maintain attitude and bleed at greater speed on the final descent. This process would use up almost all of the fuel on the ship. How can we get back to Earth from Mars?

You know it would be stupid to travel to Mars carrying fuel, which would require you to return five times the mass, weight, and risk. So when the first humans to colonize the Red Planet want to return, they will need Mars to fuel the journey back.

Mars has an ACO2 atmosphere and plenty of water ice which gives you CO2 and h20. Therefore, you can make ch4 and o2 using the Sabatier process. In the long run, this can be done on Earth as well. We can use solar energy to remove CO2 from the atmosphere, mix it with water, and produce fuel and oxygen for rockets.

And now what happens when we return to earth because mars have less gravity than the earth, you don’t need a booster you can go from mars surface to earth surface using the only ship. You need a maximum payload number of around 20 to 50 tons for the return trip to work, but it’s a single stage to get back to Earth.

On Earth, the constellation does something similar to what it did on Mars. Using the atmosphere to gradually slow the vehicle it is brought back into motion which will eventually allow it to descend.

All Starships now have six landing legs which are located on the inside of the skirt. They are turned 180 degrees inward for transport launch and flight. It is believed that the feet are designed to crumble to absorb the deceleration which means they are not reusable.

During landing, they are deployed using a simple gravity system, in other words, they are propelled down using their own weight and locked in place. The exact duration of each visit depends on when it is taken because both the orbits of Mars and Earth are not perfectly circular over time. It takes six to eight months to travel between them.

So these are enough for today. Comment what is your opinion about this information “How will Starship complete its journey to Mars and back?“. Thanks for reading.

2 thoughts on “How will Starship complete its journey to Mars and back?”