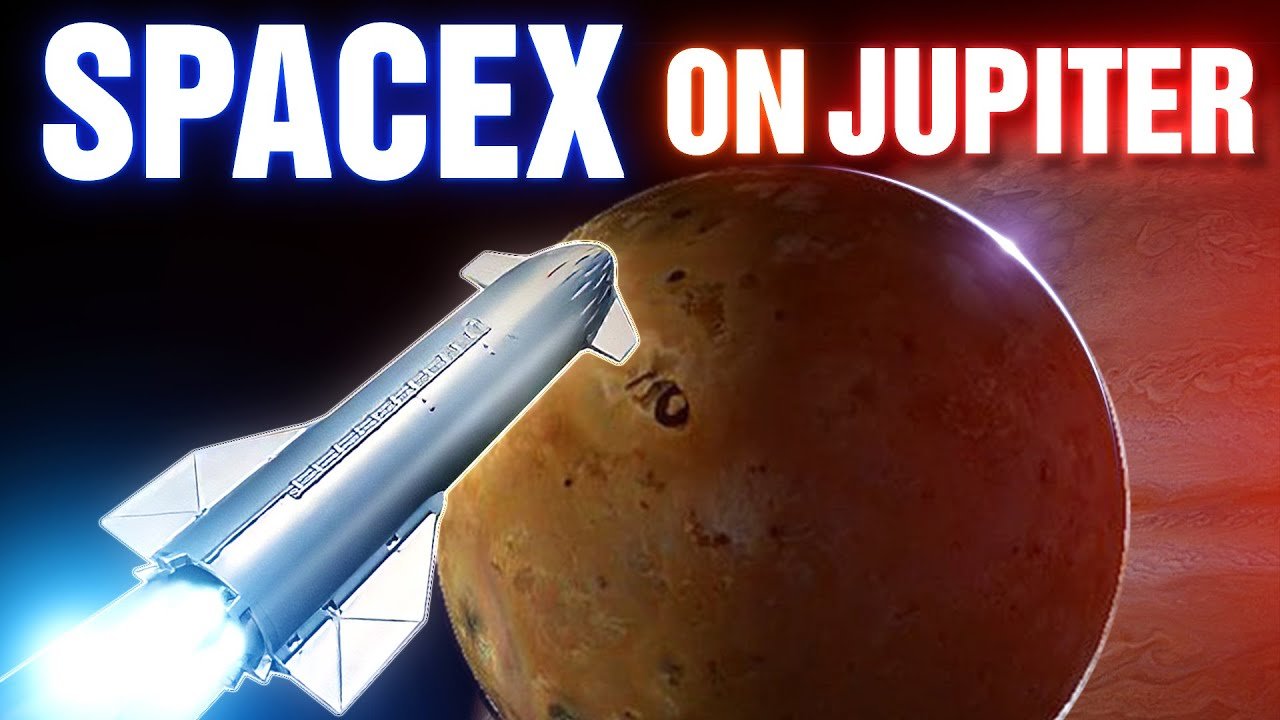 SpaceX’s New Plan to Launch Jupiter Moon Mission: It took so many years of toil, disappointment, and heartbreaks for Spacex to gain the backing of NASA. However, since September of 2018, they’ve been growing in leaps and bounds and NASA confidence has also grown exponentially. And now, they’ve been rewarded with another contract, to launch Jupiter Moon.

The private aerospace industry within the USA has been a potent force ever since Elon Musk founded SpaceX and proved that it could be a success.

Before SpaceX, we know that private companies were limited to developing supporting auxiliary technology and architecture for government contractors who usually happened to be the US and the Russian governments.

It was only after SpaceX managed to secure funding from NASA in 2005 for the Falcon rocket design that industry experts and analysts began to take private aerospace companies seriously.

Despite this, SpaceX had to work tirelessly through the global economic crisis of 2008 and well into the 2010s to complete a major reusability milestone.

The historic success of the Falcon 9 rocket’s landing back to Earth proved absolutely everyone wrong and cemented the currently accepted fact that private companies will be leading the next innovations in aerospace.

Following that, SpaceX quickly became the leading provider of commercial spacecraft launches. Contracts began to be struck with governments, space agencies, and corporations around the world launching numerous kinds of satellites into orbit.

You also know that SpaceX’s rocket designs are also being used for one of their own projects, the Starlink internet service composed of thousands of orbital satellites beaming super-fast internet straight into your home.

SpaceX has built up a reliable credit reputation as a manufacturer and provider of rocket launch options and as NASA was SpaceX’s earliest backer, it can be said without any doubt whatsoever that they are willing to work with them towards new ambitious projects.

A surprise announcement made a few days ago details such an ambitious project on which SpaceX and NASA will be working together through and through.

The announcement was made that SpaceX’s Falcon Heavy lift rocket will be used to transport NASA’s Europa Clipper spacecraft into Space and set it on its way to the largest moon of Jupiter; Europa.

According to official documents, Europa Clipper is set to launch from NASA’s Kennedy Space Center in Florida to eventually reach Jupiter in April of 2030, four years afterward.

Europa Clipper is a space probe, designed to take pictures and videos for NASA scientists to study from. It will do so by completing more than 40 fly-bys of Europa for another four years after reaching it.

From this expedition will arise the most detailed information and analysis of one of Jupiter’s moons yet and give us whole new insights into how Jupiter’s fundamentals function.

It will be part of efforts to attempt to understand whether the moon Europa has conditions suitable for life and determine its compositions by way of photo and video.

Signs of geological activity, the presence of subsurface oceans, and the depth of any such oceans will be determined by the expedition. The success of Europa Clipper will undoubtedly lead to even bolder expeditions to further-flung planets and Pluto.

It came as a surprise to many industry analysts and experts as SpaceX has been struggling somewhat to make their Starship prototypes verifiable successes.

Ardent followers and supporters of SpaceX and Elon Musk though, have not forgotten about the successful Falcon Heavy rocket which was designed to be partially reusable as a step from which they can work on the Starship.

Besides that, many people are familiar with the ways Elon Musk plans and works. SpaceX facilitated the space travel of several NASA scientists to the ISS (International Space Station) last year with its Crew Dragon spaceship, being the first time the US has launched its own astronauts into space since the last Space Shuttle was decommissioned in 2011.

Since then, SpaceX has been regularly transporting astronauts to and from the ISS. NASA also awarded SpaceX a contract to develop a lunar lander model of the Starship design, which the company wants to be completed within 2024 and begin landing astronauts on the moon for the first time since 1972.

Indeed, SpaceX had to face intense competition on this deal from competitors Blue Origin and Dynetics. SpaceX also had to face challenges getting the contract for the Europa Clipper as Congress really wanted NASA to make the launch using the SLS (Space Launch System) and it took a long time for them to budge.

Only undeniable hard facts regarding mounting costs and technical issues were able to get them to approve of NASA contracting SpaceX. Europa Clipper was originally intended to fly on NASA’s own Space Launch System rocket booster, designed with collaboration from famed aerospace giant Boeing who was involved in the design, developing, production, and testing in its entirety.

Yes, it is the same Boeing responsible for the design and production of well-known airplanes such as the 747, 777, 787. SpaceX has beaten Boeing to a contract to find out whether or not Europa can sustain any form of life.

The decision to switch over from the SLS to Falcon Heavy is due to perpetual delays and extra costs during the design and production processes.

It was because of this that NASA has been petitioning the US Congress to let Europa Clipper be carried by a commercial spacecraft, helping NASA save money. NASA was not even able to get the SLS off the ground according to plans in 2017, and that mission was pushed to November 2021 which made Congress seriously reconsider and land upon SpaceX.

Deciding on Falcon Heavy, a commercially made rocket presents many benefits but also challenges. The other commercial options on offer are not as powerful as the Falcon Heavy to be able to properly launch Clipper onto a path to Europa, requiring it to undertake a 5-and-a-half-year journey to Europa.

The probe would also have needed to conduct extra procedures for further propulsions. Confidence in SpaceX is high as Falcon Heavy received launch certifications from NASA’s Launch Services Program in 2018.

It will also launch the Psyche mission into orbit as planned in 2022 alongside Europa Clipper. The scheduling of the Psyche launch before Europa Clipper is important as it will be a true test due to the fact that Falcon Heavy will be launching a spacecraft in order to study the metallic core of an asteroid.

The deal with SpaceX has saved NASA about $500 million in operating and maintenance costs. Savings such as these will be instrumental to later getting the troubled SLS rocket off the ground and into operational use, alongside other space projects.

To put NASA’s cost savings into perspective, the Falcon Heavy costs significantly less compared to the rocket that launched the latest Mars rover. Among the disadvantages though, is the slower speed.

The SLS would have offered a much faster ride for the Europa Clipper, allowing it to fly directly to Jupiter and reach Europa less than three years after launch compared to four years with the Falcon Heavy.

Some industry experts and NASA officials have also raised the question of whether NASA will slowly grow to be more and more reliant on SpaceX’s designs. This is a valid concern as national space agencies ought to have a commanding influence over the course of the development of space technologies.

The space race is played at the national level even if the news media is flush with talk about the ‘private billionaire space race’ which only drives up competition for better technologies that can be utilized by national space agencies through profitable contracts.

If however, NASA loses this influence on space tech, the US government will lose out on talented employees and experts over to the private sector gradually. In the end, it results in higher average costs to be shouldered by NASA which is the exact opposite of what projects such as the Starship are supposed to accomplish.

Plans set in motion, for now, are going to result in net positive outcomes for the US space community at large and help towards the presentation of a united front against Chinese advances in space technology.

A space showdown with China is not something the United States’ aerospace industry players can expect to ignore or avoid. NASA making a concrete decision on this project was an event that came just in time as the Chinese CNSA is going to inaugurate their version of the ISS next year, the Tiangong.

This new space race will be fought with information, data, grand displays of prowess, and pure propaganda. Every little edge will come into play and every little edge over the other will matter.

NASA making significant revelations about Jupiter and its moons will be an event that will certainly be used to hearken back to the NASA of the 60s and 70s that managed to land humans on the surface of the moon.

If this and the SN20 test goes well, we can expect to see the Starship landing astronauts on the moon and return them to safety very soon.

Thanks for reading till the end. Comment what’s your opinion about this information “SpaceX’s New Plan to Launch Jupiter Moon Mission”.