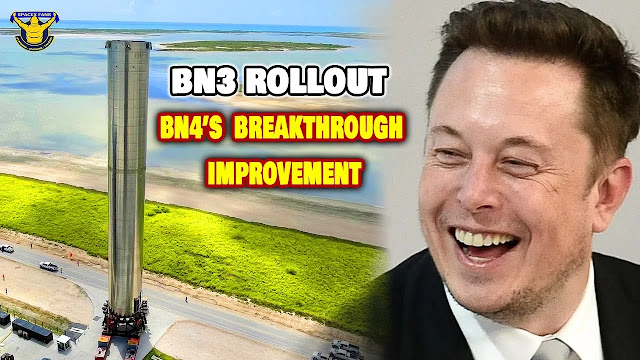 On the first day of July SpaceX delivered the first super-heavy booster bn3 prototype from Assembly High Bay to the launch pad less than five miles down the road. Musk shared this week that the first booster to fly will be Booster 4.

Booster 3 will be used for the ground test. We are changing most of the designs from 3 to 4. Booster 3 was very difficult to build, he shared via Twitter, especially except for the rapid development in the first 10 boosters and the first 30 ships, he said.

So what happened with Booster 3, SpaceX initially planned to use Starship SN20 and Super Heavy BN3 for its first orbital flight test. However, there is no real-life flight data for a full-scale super-heavy prototype. Jumping straight in for an orbital flight test is obviously going to be very risky.

We know that lift-off thrust for the super-heavy booster is going to be more than twice that of the Saturn 5, with 29 sea-level Raptor engines firing at the same time.

The structural and acoustic pressure that the booster would have to withstand could easily break the entire launch system during liftoff. And we’ve already seen a miniaturized version of this potential explosion with the starship sn4, but it’s important to understand that sn4 had far less fuel than a fully fueled orbital-class starship and super heavy.

If a failure occurs during liftoff the damage could be very bad, to say the least. So that clearly means that some sort of real-life testing is needed for a full-scale super-heavy prototype and that’s exactly what SpaceX plans to do with super heavy BM3s like the Pathfinder BN1.

SpaceX has moved the hydraulic ram previously used in the BN 2.1S test to Suborbital Launchpad A. That means SpaceX probably isn’t looking to hop tests with the super heavy BN3.

BN3 could undergo a cryogenic pressure test next week and a simulated stress test using hydraulic rams. Why do I say next week because today we received a public notice from Cameron County that there is a new order to temporarily close State Highway 4 and Boca Chica Beach on Tuesday, July 6th from 7 a.m. to 5 p.m.?

However, provided that bn3 has a thrust buck installed, it means that if necessary SpaceX can attempt the 150m or so hop test with bn3 that was originally planned for the super heavy bn2.

Why do you think SpaceX should attempt a hop test for the super heavy BN3? Let me know in the comments section.

The next prototype Super Heavy BN4 is now on its way with Starship SN20 for the first orbital flight test of Starship and Super Heavy. Do you wonder why SpaceX chose Booster 4 instead of Booster 3?

There have been many improvements in BN4, as Musk said about 80 percent liquid oxygen. In addition, it will also have to be confirmed that the entry in Starship Super Heavy will not burn. It will give more performance.

Instead of using fuel to do this, the atmosphere slows down the booster that would otherwise have been used on the climb. The super heavy stainless steel construction helps to allow it to re-enter the sand it can handle the heat.

Once all launch tower steel segments are added the tower will be 469 feet tall with 10 feet of the lightning rod. It will also feature the ability to hold the super-heavy booster by its grid fin upon return from space.

What exactly are the benefits of this massive tower holding the 230-foot-tall super-heavy booster as it descends from space, enabling rapid reusability. Engineers are working to build a rocket capable of being reused at least three times a day.

Starship Booster is the largest flying object ever to be captured from the sky by the launch tower. Elon Musk said earlier this year that a big step forward could be made in the form of flying again within an hour.

Using the launch tower to hold the rocket saves mass and the cost of the legs by enabling the booster to be moved immediately to the launch mount. SpaceX aims to conduct the first orbital Starship flight test this summer.

So what’s the plan for their flight, if the company receives the necessary regulatory approvals then the super heavy will take a starship from starbase into orbit and back on the ground. While the starship orbits Earth and lands and a soft ocean descends from the northwest coast of Kawaii and Hawaii.

The ambitious flight test will last about 90 minutes and will enable SpaceX engineers to learn how starship structural design hardware and software work to further develop the spacecraft that will one day enable humans to become a multi-planet species.

SpaceX told the Federal Communications Commission that it aims to collect as much data as possible during flight to measure entry dynamics and better understand what the vehicle experiences in flight arrangements that can accurately predict or It is extremely difficult to replicate computationally.

SpaceX said this data will anchor any changes to the vehicle’s design or config-up. Conceptualizing operations after the first flight and creating an improved model to use in our internal simulations.

Last News Today Richard Branson aims to beat Jeff Bezos in space for nine days. What about SpaceX in the race Space tourism firm Virgin Galactic confirmed Thursday that it will fly its founder Richard Branson on its next test flight, scheduled for July 11.

I’ve always been a dreamer, Branson tweeted after the announcement that my mom taught me to never give up and reach for the stars. It’s time to turn that dream into reality in the next virgin galactic space flight on July 11.

Branson’s new flight date will come before rival Jeff Bezos’ flight in his own space tourism rocket takes place on July 20, the stage for a largely symbolic demonstration between the two billionaires’ race to validate their space tourism rockets. Will prepare

After Blue Origin announced that plan last month, Branson congratulated Bezos in a Twitter post and teased his own flight, saying, “Many congratulations to Jeff Bezos and his brother Jeff for announcing the space flight plans. Started construction at Blue Origin in 2000, we started construction at Virgin Galactic in 2004 and now both are opening up access to space just how extraordinary”.

A seemingly destined coincidence, Virgin Galactic’s announcement comes on the same day that Blue Origin announced a fourth crew member for its first crude New Shepherd flight. Wally Funk is a great aviator who also has a ticket to Virgin’s VSS Unity.

The Federal Aviation Administration approved Virgin Galaxy to fly to space customers last week, as did a tweet for the company’s commercial space transportation operator license. For the first time, the FA licensed a spaceline to fly customers.

Blue Origin has yet to get similar approval to fly customers with Bezos ahead of its July 20 flight but is getting closer to achieving it. Branson’s space venture differs from Blue Origin and SpaceX in a few key ways.

Virgin Galactic focuses on suborbital tourism rather than launching people and payloads into space. It also has a fundamentally different way of sending spacecraft through Earth’s atmosphere.

However, Richard Branson is the first of the space firm’s founders to actually build it himself in space. This news is a unique turning point in the emerging new space race. Blue Origin Virgin Galactic and SpaceX have all worked to expand space flight to civilians.

That is, the flight is probably the next logical step for the founders. Elon Musk 2018 expressed interest in joining Japanese billionaire Yusaku Maizawa in his journey around the Moon in 2023.

He has also suggested that he would like to die on Mars, where he plans to build a city by 2050, and not the effect he said in December 2020. Look at Musk’s mission, that too fast but will go to and colonize other planets.

So these are enough for today. Comment what is your opinion about this information “SpaceX Starship Super Heavy BN3 Finally Rollout to LaunchPad“. Thanks for reading.