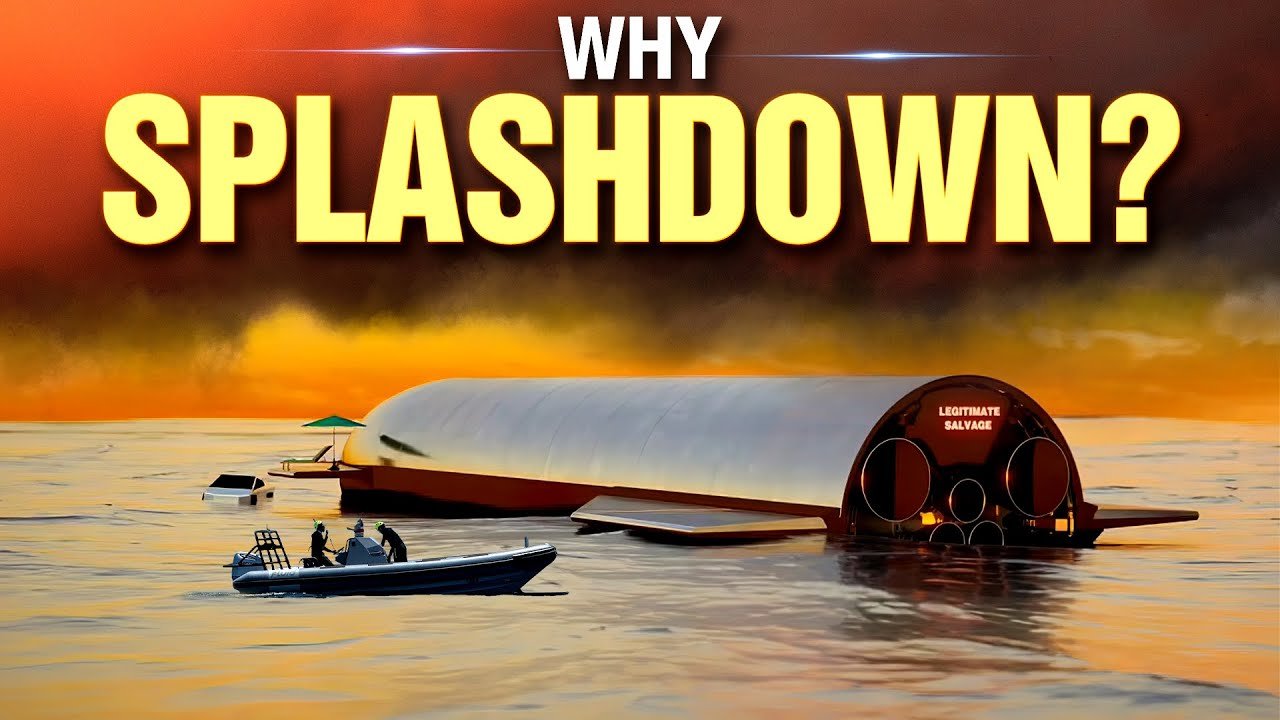 Starship SN20 Will Splash Into Water Instead Of Landing: We have experienced all the starship prototypes test flights up to the SN15. Up to this point, they’ve all attempted to land on the ground, which is expected. However, SpaceX is about to take a strange turn with the SN20. They’re going to splash it in the water.

Now the question that begs to be asked is: why? Why the absurd landing with the SN20? Will it be a safe method of landing if the starship is crewed? Well, we will find out in just a second.

The flight plan for the SN20 prototype has been revealed. According to its details, the Starship SN20 will fly for a total of 90 minutes and enter orbit and circumnavigate the Earth once before falling down into the Pacific Ocean near Hawaii in a controlled manner.

It is yet to be verified and approved by the US Federal Aviation Agency but that probably will not take long. Surely, the idea of a spacecraft landing in water instead of attempting to safely land as envisioned by SpaceX seems strange but there was much deliberation that went into making that decision.

You may remember the infamous test of the Starship SN8 prototype, which was the first prototype cleared to perform a high-altitude flight test. It ascended as planned and also descended similarly though the horizontal fall designed to break speed.

Right afterward though, the rocket failed to whip itself upright the way it was supposed to and inadequate deceleration caused by incorrect pressure values resulted in a crash. The crash caused a major explosion on the landing pad and the total destruction of the prototype.

Since the SN8, the SN9, SN10, and SN11 all exploded at various points of the flight plans for various reasons. The testing of the SN15 prototype was judged to be a resounding success but it still was not free of trouble, as a short fire broke out after landing successfully.

This was despite the prototype boasting significant improvements over its predecessors, including new avionics systems, a new plumbing system, and an improved design of the Raptor rocket engine. Clearly, SpaceX has been experiencing numerous road bumps on the way to building a spaceship fully capable of reaching orbit and then safely landing back down.

Even more important is the fact that similar problems keep appearing through subsequent prototypes. These problems cannot be ignored if the Starship is ever going to become a viable option for long-distance space travel.

Keep in mind that SpaceX is charting unknown territory in the aerospace industry with the Starship. No rocket design prior to this was ever designed to be able to be reused after a flight into space since it was deemed technologically impossible.

Having very little precedent to work upon, SpaceX’s engineers and scientists are quite literally making notes as they go and adjusting things to see what works in the development of this completely new technology.

Rocket science is no joke and is currently one of the most difficult disciplines of science to work with. Then again, constant prototype failures and mishaps are a part of SpaceX’s design and prototyping philosophy.

They follow the principle of ‘rapid prototyping, which leads them to attempt building affordable but mass-producible prototypes.

This way they do not lose out on crucial time planning and making corrections based on fast incoming test results from rapidly conducted and completed tests. This is why the FAA and FCC requirements and bureaucracy that SpaceX has to navigate are more stringent.

Constant prototyping with high chances of failures increases the risk of damage relevant to both agencies’ jurisdictions. This is also why the relatively exclusive and somewhat isolated Boca Chica location Elon Musk’s determination to operate this way means SpaceX will do anything they need in order to do so. As a private company, liability is of major concern.

If one of their rocket launches or debris from exploded rockets injures or even kills a private citizen then they are likely to face legal action to the point of oblivion.

Federal agencies and the US government may also be pressured to revoke their licenses or even forcibly disband the company. The technical side of the decision to drop the SN20 is rather simple though.

Further analysis of the flight plan filed to the FCC by SpaceX reveals that the Starship prototype will be re-entering the earth from orbit at an angle. Previous prototypes that flew high-altitude mission profiles began their landing attempts completely vertically.

It is the part where the rocket flips its orientation to drastically cut speed before flipping up vertically again where most problems were experienced.

With the SN20, this different approach of splashing into the water may be tried in order to determine if the root causes of previous events still show themselves.

This flight plan also poses a different challenge, however, as the rocket’s re-entry into the atmosphere at the very high orbital speed can risk the lives of people and property damage if attempted over land.

SpaceX still expects things to go wrong with the SN20 as it has newer technology and mechanisms compared to previous prototypes. The worst-case scenario in this would be a total disintegration of the Starship upon re-entry so all the debris would be falling safely into the ocean without causing harm to anyone or anything.

The cause of the disaster was found to be a faulty thermal protection system damaged upon take-off. It resulted in the total disintegration of the spacecraft and the deaths of all crew members on board.

A new thermal protection system is one of the things SpaceX has put on the SN20 so they are right to worry about potential disasters similar to it, especially since the prototype was built so quickly.

All the information can then be used to make the next prototype a resounding success in exactly the way they want; safely landing back onto the launch pad without any other issues or problems.

While it is not explicitly stated yet, it is very possible that the Super Heavy booster prototype that will take SN20 into space will also attempt to land safely on one of the seaborne landing pads.

A recovered intact booster will similarly be of immense help and advantage in helping SpaceX make fast progress in eventually completing the design of the Starship and take it beyond the prototype stage.

In summary, SpaceX has chosen to land the Starship into the water because their estimations have led them to keep in mind major problems with the landing phase and thus they want to reduce the potential of damage caused to others.

The landing process has not been fully fleshed out and nailed yet so a recovery procedure they know to mostly be safe is the best way to identify further problems without having to lose a spaceship to destruction and disintegration.

Since the viability of the Super Heavy booster being capable of satisfactorily descending for a safe landing has also increased greatly, SpaceX seems to want to aim for double success with the booster and the Starship for the next launch or two after this one.

If all goes well, SpaceX will complete their most important spacecraft flight tests ever and that too, in very quick succession between prototypes.

SpaceX’s efforts towards building a never-before-seen spaceship that will turn science fiction into science fact are undoubtedly fraught with many setbacks and issues. Their operating methods, however, have given them results in the past, and with Elon Musk’s energetic leadership in navigating through the entire process, can reliably produce further positive results in the future.

We can only wish SpaceX and Elon Musk good fortune as they navigate through an incredibly difficult and precision demanding endeavor to create history. Paving the way for regular human space travel is no small feat and as such, the toll and demands asked of them are nothing short of immense.

Thanks for reading till the end. Comment what’s your opinion about this information “Starship SN20 Will Splash Into Water Instead Of Landing”.