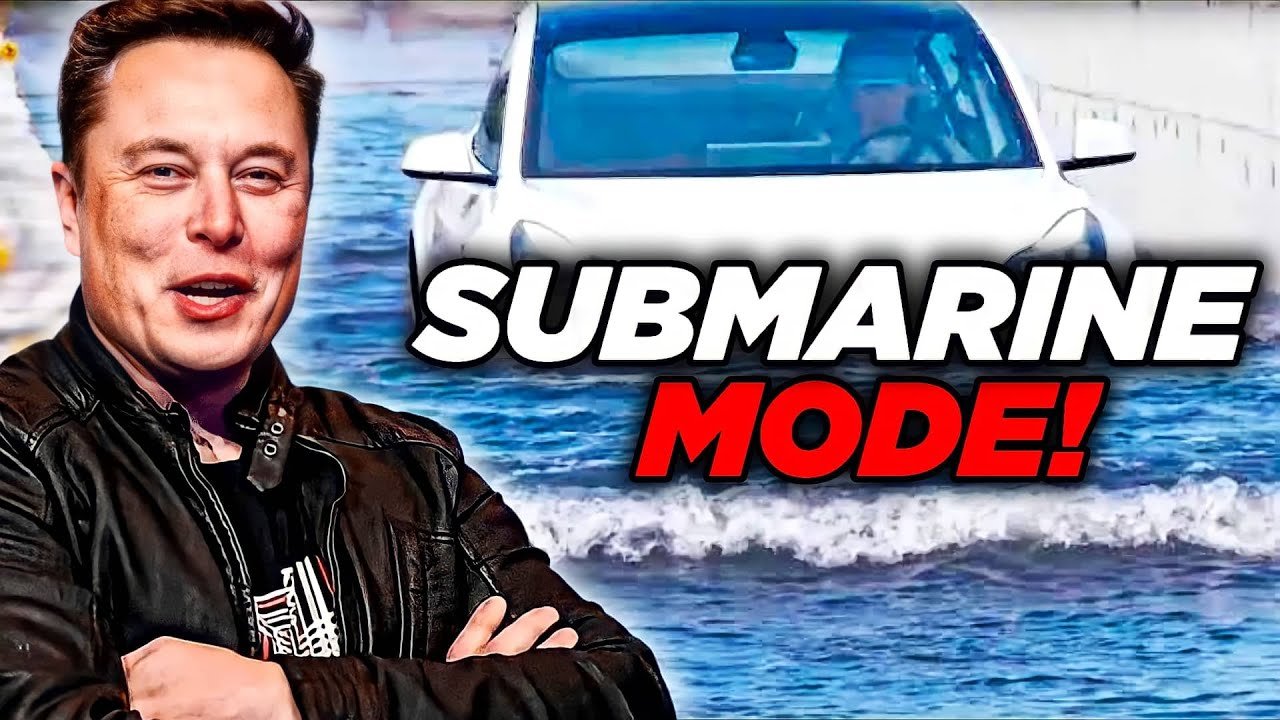 Tesla Model Y Just CONQUERED Deep Floodwaters!:- Have you ever heard of a vehicle walking on water? Here we have it. Stay tuned to discover how possible this is and how Tesla’s electric vehicle manages to pull this off.

We know Tesla’s electric vehicles can be mind-blowing from self-navigation on autopilot to unimaginable protection of vehicle occupants, among others. Now we hear that the ModelY can literally walk on water. Want to find out how? Over the course of a few years, Tesla has a reputation for manufacturing electric vehicles that surprisingly fare well during floods.

The Gigafactory in Shanghai, China, uses a flood simulator to assess its locally manufactured model Three and Model Y as the country, China is particularly notorious for its number of typhoons and significant rainfall yearly.

A video showing a Tesla Model Three streaming through deep flood waters in Henan province, China, surfaced some time last year. The video showed the vehicle spraying water high as it moved through the flood, a whole lot better than the stock, fuel-powered vehicles around it.

It was said to have moved through the waters like an overpowered paddleboat. Details from the incident revealed that the Tesla Model Three had been in a tunnel with the other vehicles when the floodwater came in.

The water was said to have risen quickly, leaving other cars stranded. At the same time, the Model Three driver immediately drove out of the area, resulting in the viral video. Elon Musk did say sometime in 2016 that Tesla’selectric vehicle can function in the form of about after a Tesla owner drove the Model As through a flooded tunnel in Kazakhstan.

It should be known that driving in flooded areas can cause severe damage to a vehicle’s engine, whether electric or fuel-powered, as the vehicle’s undercarriage is not designed to sustain extended periods submerged in water.

Although Tesla’s electric vehicles, batteries, and cars are sealed to be watertight, wading through extreme depth water, especially for prolonged periods, could compromise any vehicle seal, whether electric or not.

Elon Musk tweeted that the electric vehicles have sealed battery and drive units and do not require an oxygen supply, unlike most combustion engines, to keep the car moving. But it also advises that Tesla electric vehicle owners should be careful when driving through water.

The Model Y is Tesla’s fourth four-door, after the Model S big saloon, the Model big SUV, and the Model Three small saloon. The Model Y is a stylish and roomy electric SUV with the strong appeal of the two versions, we prefer the long-range.

It lacks the crazy acceleration of the performance but is still pleasingly quick. It’s also smoother riding and has a better value. The why clearly lags the rest of the industry, though in smartphone integration

Now another video has surfaced on Twitter showing how a tesla Model Y somewhere in China is quickly navigating its way in floodwaters that another blue sedan, which seemed to be an Ice car, was already stranded in the 27.2nd video showed a blue fuel-powered vehicle stuck in the water and a second later, a ModelY moving seamlessly through the deep water unbothered.

Tesla’s CEO Elon Musk expressed his approval by giving the video a thumbs up on Twitter. The lack of an engine and a tailpipe in an electric vehicle makes them more drivable in flooded areas and puts them at less risk of water flowing into the engine.

Elon Musk described this phenomenon in a tweet saying Tesla works as a boat for short periods of time, as an electric car has air intake or exhaust to block and battery motor electronics are water sealed submarines are just underwater EVs he might sound overconfident, but Tessa’s electric vehicle indeed has several impressive features.

Sometime in 2020, another vehicle surfaced on the Internet showing a Tesla Model Y compact electric SUV from Florida summoning his car from a parking lot filled with flooded water. The Model Y was said to have been an hourlong in the rain somewhere in Florida, and when it stopped raining, the parking lot was filled with floodwater.

So he opened his Tesla mobile app and called the car to himself. The car owner captioned his video on Instagram so it rained for like an hour, and when I finally was able to go to the car, I realized that it was in a flooded area.

I utilized the Smart Summon that sprang to mind. It did a really good job, better than expected. The Model Y performed admirably because the smart summoned self-driving features original objective is to summon your car to you within a parking lot or private property.

The car backed up gently and then turned right. As soon as it came face to face with the truck, it came to a halt and took the ideal position for moving forward. Although being able to drive a Tesla in water is an excellent thing that a Tesla might want to indulge in, tesla owners can have their car warranty voided if found indulging in such behavior.

Aside from this, different troubles you never know may arise from trying that as you never know the height of the water or if there is a hidden hole or ditch created in the flooded road. However, if the situation calls for it and you are stuck in a terrible situation and then you have no choice.

But please do not head out to test your Tesla’s Seaworthiness if it can be avoided. Aside from the current risk, there have been cases where the road is much deeper than it seems, and the driver is clueless, either due to unfamiliarity with the road or because the road has given way beneath the water.

Tesla’s CEO Elon Musk has been set to have a soft spot for vehicles that can double as a means of transportation through the water. In 2013, Elon Musk acquired a James Bond Lotus Esprit from the film The Spy Who Loved Me because it was famous for transforming into a submarine and was sold at an auction in London for almost a million dollars.

Elon later joked that he was disappointed in the purchase, as the Lotus did not actually work underwater as it did in the movie. He further joked that he would upgrade the vehicle with a Tesla powertrain to see if it could transform for real.

Earlier this year, Tommy L.Garage explored the Tesla Model Y performance in winter conditions by driving on snowy roads. The car performed well on roads fully covered by fresh snow, and due to the all-wheel drive, it does not get stuck even when going uphill from a complete stop with the all-season tires.

The Tesla Model Y is also well suited for basic winter driving, and the all-wheel-drive significantly helps. The smooth control of electric drive is a significant advantage of electric cars, not just Tesla.

Tesla’s performance range capabilities and price offerings are unmatched. Tesla’s electric vehicles are higher specs and are cheaper than mainstream legacy electric vehicles with inferior versions and even more expensive.

It is no surprise that Tesla is currently referred to as the most valuable car manufacturer in the world. Tesla is making modest upgrades to the Model Y for 2022. These include a new, lighter twelve-volt lithium-ion battery, which replaces the old lead-acid battery, and laminated rear windows to enhance noise insulation.

However, the Y is projected to experience even more significant changes. The Tesla Model Y has done more than its share of moving electric vehicles into the mainstream, from having a sporty driving-like feel to its impressive range to its affordable price to its ability to walk on water, among other features.

Thanks for reading till the end. Comment what’s your opinion about this information “Tesla Model Y Just CONQUERED Deep Floodwaters“