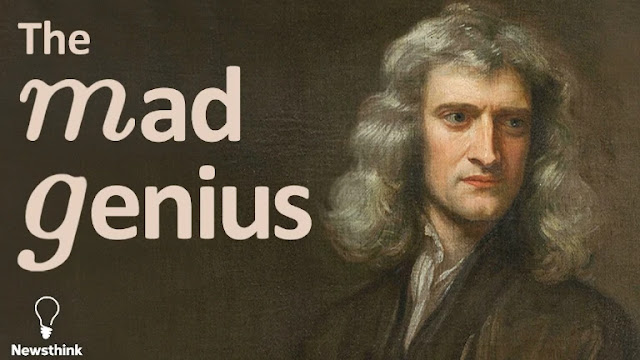 The list of the most influential people of all time would not be complete without Sir Isaac Newton. Newton’s laws are related to almost everything that we see in everyday life. They help us understand how cars work, how baseballs move, how anything moves.

Yet the 17th-century scientist had a hidden side that would become clear by the end of this story. By the mid-20s, Newton had already invented calculus. Not bad for an illiterate farmer’s son.

He would never meet his father, who died three months before his birth on Christmas Day 1642 in the small English village of Woolsthorpe Manor in the County of Lincolnshire. He was a premature baby and so small that he was later told he could fit inside a quart.

He barely survived. When Newton was three years old, his mother remarried and moved to a nearby village to live with a wealthy pastor. Newton was left behind in the care of his grandparents. That abandonment frightened him.

Years later, he wrote a list of his sins, recalling an outburst from childhood: “My father and mother threatened Smith to burn them down and the house above them.” He was a curious kid – more interested in mechanics than making friends.

He carved this sundial at the age of nine. He enrolled in a local grammar school when he was 12. His signature can still be seen from a window at King’s School today.

After the death of his stepfather, his mother tried to kick him out of school so that he could become a farmer – a prospect he feared. Fortunately, the schoolmaster persuaded his mother to send him back to the classroom, where he earned the necessary knowledge to enter the University of Cambridge in 1661, making his payment by working as a servant.

Although he studied the works of ancient Greek philosophers, he questioned their theories, writing in his notebooks in Latin, “Plato is my friend, Aristotle is my friend, but my best friend is truth.” He vowed to find the truth through rigorous scientific experimentation.

His time as an undergraduate was impeccable but the extraordinary circumstances that followed would set the stage for his greatest achievements.

Shortly after receiving his bachelor’s degree in 1665, the bubonic plague ravaged Europe and was estimated to be one in four people in London.

The pandemic forced Newton to work from his childhood home for the next two years and it would lead to his most amazing successes. He used a prism to discover that white light and sunlight are composed of the colors of the rainbow.

The widely held belief at the time was Aristotle’s theory that color was a mixture of black and white. To prove his theory, Newton built a reflecting telescope that used a mirror instead of a lens – thereby obtaining a more accurate image.

This is much safer than when he stuck a sewing needle into his eye socket to find that changing the shape of his eyes would change his perception of color. There was also an apple tree outside the family home. Famous apple tree.

Legend has it that Newton was sitting under a tree when an apple hit him on the head, leading him to think of gravity – the force that brings things down.

There’s no evidence that the fruit actually fell on his head, but he asked the question that helped unlock our understanding of the universe: Could the same force reach the Moon?

He argued that the same gravitational pull kept the Moon in orbit around Earth rather than deviating, and believed it could also explain the motion of our planets in the Solar System.

Mathematics at the time was not sophisticated enough to determine the motion of these objects, so Newton invented his own form of mathematics. There was controversy as to who actually invented the calculus.

When the German mathematician Gottfried Leibniz published his paper on calculus in 1684, Newton claimed that he had done the same thing 20 years earlier. The thing is, Newton was so secretive that he didn’t really make his efforts public because he couldn’t stand the scrutiny of his work.

When Leibniz appealed to the Royal Society in London, Newton used his influence as president of the Scientific Academy to bring it together with him. Most historians agree that the two discovered calculus independently.

In 1667, after the end of the plague, he returned to the university to continue his research as a fellow. He was a workaholic. Sometimes he forgot to eat. Just two years later, while still in his twenties, he attained one of the most prestigious academic positions in the world.

The Lucasian Professor of Mathematics was later placed by none other than Stephen Hawking. Yet he was indifferent to his students. At one point, when no one came for the class, he is said to have lectured in an empty room. His real passion was in research.

In 1687, he published his masterpiece: The Mathematical Principles of Natural Philosophy – often referred to as the Principia – one of the most important works ever written. This was his first edition copy.

It was here that he formulated his three laws of motion along with his law of universal gravitation. The first describes how an object acts when no force is acting on it. For example, a rocket remains stationary until a force is applied to it.

The second law tells us that the more mass an object has, the more force it will take to move it. Accelerating a larger rocket requires more fuel. The last law states that for every action there is a reaction. The engine produces hot exhaust gases that flow through the rear of the rocket.

In reaction, a coercive force is produced – pushing the rocket skyward. Newton may be considered one of the greatest scientists the world has ever known, yet he actually contributed more words to theology.

Newton believed that the Bible provided the code to the natural world and that by carefully studying the sacred texts, he could predict the future. He believed the apocalypse would happen in the year 2060 with the caveat: “It may end later but I see no reason for it to end sooner.”

He foresaw a period marked by the second coming of Christ after war and devastation and the beginning of a new, divine era. His religious side remained largely hidden from the public until 1936 when Sotheby’s auctioned off his religious manuscripts.

They ended up in the hands of a Jewish scholar before being given to the State of Israel. 7,500 pages in Newton’s own handwriting. He held unorthodox views of Christianity by rejecting belief in the Trinity – Father, Son, and Holy Spirit.

and also fought against attempts by King James II to Catholicize the universities that elected him as Member of Parliament, where he served two brief terms. Apparently, the only thing he said on record was a request to close a window.

Newton also had another unknown side. He spent 25 years secretly studying alchemy – discovering a method to convert common metals into gold. This is a manuscript where Newton wrote a recipe that was considered a step towards forging the legendary Philosopher’s Stone that is now popular in the Harry Potter series.

Alchemists believed that it could also help humans achieve immortality. Unfortunately, all the time Newton spent in the laboratory could result in mercury poisoning.

Examination of his hair after his death found high levels of the toxic compound, which scholars believe may explain his mental breakdown in 1693 when he lost grip on reality.

He wrote letters accusing some of his friends of conspiring against him. He suffered from insomnia and persecution. The personal crisis lasted a year and a half. Shortly after ending his 30-year career at Cambridge.

In 1696, he moved to London to help run the Royal Mint. Britain’s finances were ruined by the prevalent practice of cutting pieces of coins. Counterfeiting was also an issue. Newton used scientific precision as warden and then master of the mint to improve the accuracy of coinage.

He also took upon himself the responsibility of prosecuting the culprits, some of whom were hanged. His later years would be spent further cementing his reputation and sometimes this meant trying to erase his rivals from the history books.

Another ugly controversy involved a prolific scientist named Robert Hooke, who argued that he was the one who gave Newton the impression that led to his theory of gravity and wanted credit. In response, Newton is accused of using his powers as president of the Royal Society to get rid of the only known portrait of Hooke.

To date, none exists. Newton was successful in achieving his desired legacy. In 1705, Queen Anne of England knighted him during a royal visit to the University of Cambridge, making him Sir Isaac Newton. A complex man who was reclusive, yet he wanted to be remembered.

He threw himself into his work at the cost of all hobbies and never married. Who was a man of science and also a man of faith? On March 20, 1727, Newton died in his sleep and was buried in Westminster Abbey.

The Latin inscription on his grave reads: Here he is, the mortal of Isaac Newton. His immortal legacy is shaping our modern world.

The English poet Alexander Pope was so impressed by Newton’s achievements that he wrote the famous epitaph: Nature and the laws of nature were hidden in the night. God said “let’s be Newton” and all was light.

Thanks for reading till the end. Comment what’s your opinion about this information “The Secret History of Sir Isaac Newton“.