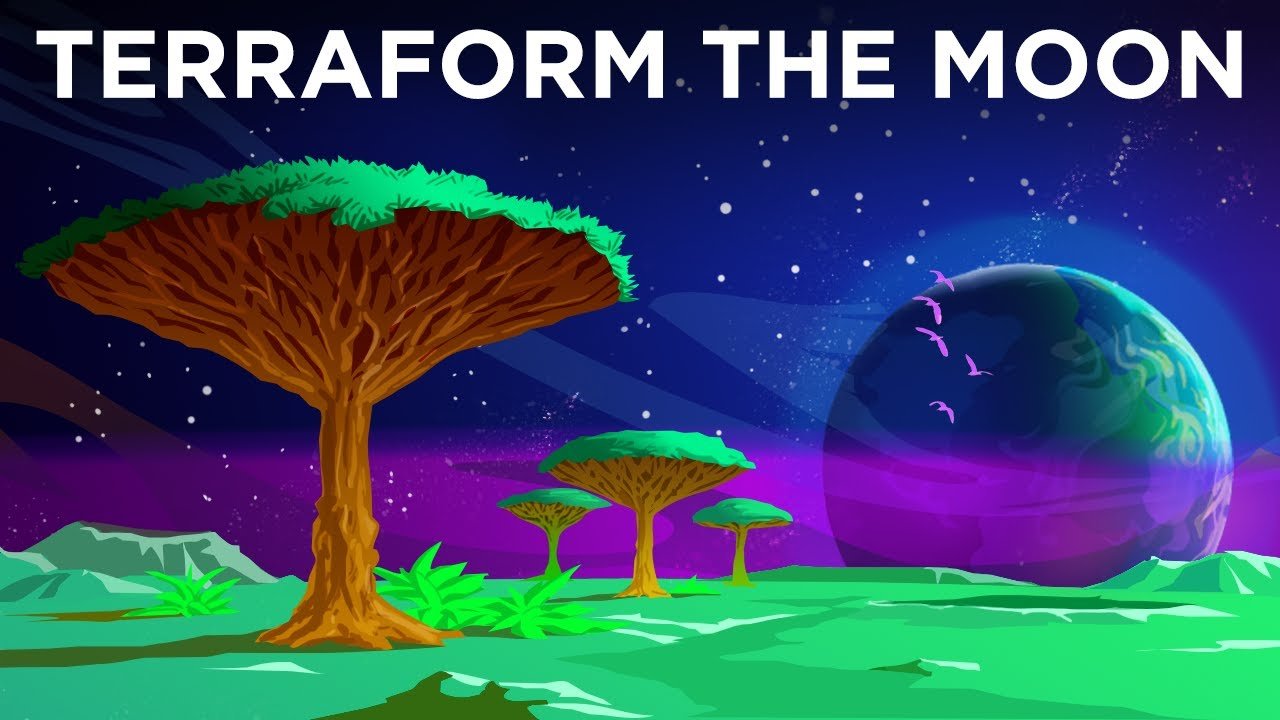 What If We Terraformed The Moon?: The Milky Way contains over 100 billion planets and moons, but only a handful can sustain biological life. But what if humans could modify the ecosystem of any cosmic body in our galaxy? What if we could change the temperature, thicken the atmosphere, and create another green planet?

In the 1940s, author Jack Williamson coined the term “terraforming”. Terraform has to create an ecosystem that supports living organisms—from large, complex vertebrates, to simple, unicellular bacteria. Unfortunately, no cosmic body has ever been terraformed.

It’s an incredible feat that we as a species are far from achieving. But let’s jump a few hundred years into the future. If we could terraform another planet, where would we start?

Our most promising candidate isn’t actually a planet; it’s a moon—the very same moon you see glowing in the night sky. What makes the Moon a perfect candidate for humanity’s first adventure at terraforming? The Moon has a huge advantage over every planet in our galaxy.

This is only a short space flight from Earth. Venus is the closest of the seven non-Earth planets in our solar system. The distance between Earth and Venus ranges from 162 million miles to 24 million miles, but the latter occurs only once every 584 days.

Traveling such great distances poses an incredible obstacle to our limited technology.

On average, the Moon is about 240,000 miles away—a fraction of the distance between Earth and Venus.

Although the distance between the Earth and the Moon is comparatively small, the Moon is far from perfect. Its dead and desolate ecosystem presents many environmental challenges. First and foremost, the Moon’s atmosphere is unbearably thin.

When these comets roar into the Moon’s exosphere, the impact would fill the exosphere with a surplus of water vapor. Water vapor contains oxygen and hydrogen, two essential for biological life. But we need at least one more element to make the air we breathe.

The last piece of the puzzle… is nitrogen. Aerospace engineer Dandridge M. Cole claimed that a gas called ammonia could fill the atmosphere with nitrogen. Cole formulated his proposal for the red planet Mars, but the same strategy could potentially thicken the Moon’s outer region.

Humans could have imported large amounts of ammonia, which would fill the Moon’s empty exosphere with nitrogen. Ammonia will also trigger the greenhouse effect, trapping and reflecting heat from the sun.

This brings us to another important path: the Moon’s wildly changing temperature. The moon boils during the day. At the lunar equator, temperatures soar to 250 degrees Fahrenheit. In the evening, they drop to the opposite extreme.

Snowy nights drop below -200 degrees Fahrenheit around the equator, while the deepest craters at its north pole can reach -410 degrees Fahrenheit. This is about 266 degrees cooler than the coldest temperature ever recorded on Earth.

Why does the Moon’s temperature fluctuate so dramatically? It does not have an atmosphere to protect and insulate the surface. If humans just tried to live on the Moon, this extreme temperature would make our lives a nightmare.

But a surplus of gases such as hydrogen, oxygen, and nitrogen would thicken the atmosphere, insulate the surface, and form a protective bubble from the Sun’s violent rays. Suppose we shoot a hundred icy comets on the surface of the Moon.

Let’s say we import a higher amount of ammonia into the atmosphere, and the Moon’s harsh ecosystem becomes more habitable. Soon, we will be building the first lunar settlement. What would life be like for the first group of settlers on the Moon?

Colonists may see surprising similarities to life on Earth. For starters, the Moon’s rotation can be approximated to match Earth’s 24-hour cycle. Currently, a lunar day is about 30 days on Earth.

The Moon is locked from Earth, so the Moon rotates incredibly slowly. By deliberately hitting a hundred comets on the Moon’s surface, we can accelerate the Moon’s rotation. The impact could free the Moon from Earth’s tides, thus altering its day and night cycle.

Renewable water means renewable energy, which can power equipment, grow food, and foster new life on the moon’s desolate surface. Of course, everything we’ve discussed so far is theoretical. Countless problems can arise at every level.

What if ammonia doesn’t trigger the greenhouse effect? What if the Moon couldn’t handle a hundred comets crashing to the surface? What if the Moon’s atmosphere changes in ways we’re not expecting? And how do we deal with such low levels of surface gravity?

This could mean devastation to our bodies. Terraforming is still a far-fetched concept for our species. A lot can go wrong because there is a lot we don’t know. Man has recently entered the space age; Yet here we are, contemplating interplanetary colonization.

Every day, our principles push us further, and our plans become more elaborate. But we have a long way to go before we can colonize another planet. If and when we terraform another cosmic body, we can start closer to home.

The Moon has its fair share of problems, but it is a strong candidate for our first interplanetary settlement. In the long run, the Moon may not be a lifelong habitat for our species. This could be an exercise to be undertaken before terraforming a larger, more sustainable ecosystem.

But its proximity and resources make the Moon a great place to start. If we can build a functioning lunar colony, who knows where we’ll go next in our solar system.

Thanks for reading till the end. Comment what’s your opinion about this information “What If We Terraformed The Moon?”.

1 thought on “What If We Terraformed The Moon?”