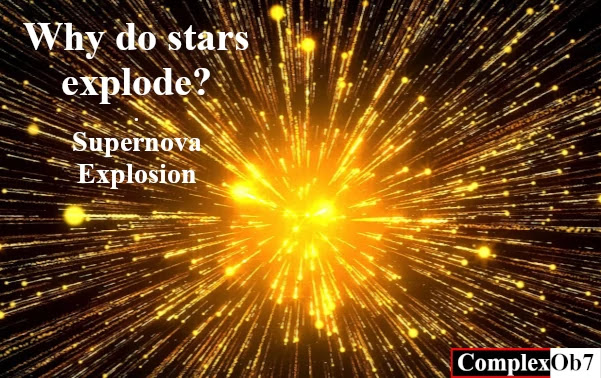 Hi Guys, How are you all? Today we are going to read about “Why do stars explode? – Supernova Explosion“. So be ready for this extremely informative journey. And one thing everyone should know “Reading Makes Man Perfect“. So Let’s Start.

Why do stars explode?

When some stars die they burst into a huge supernova. The sun is a type of incandescent plasma that has been burning for about 4.6 billion years. In the other 5 billion it would run out of hydrogen fuel and after undergoing some expansion and contraction would eventually lose its outer layer, leaving a slightly shining core called a White Dwarf.

As the star dies, it will become very quiet, but sometimes the stars come out of the way. They explode with a brighter brightness than entire galaxies and send waves in all directions. We call these explosions supernovas.

Something called the Chandrasekhar limit, named for the Indian physicist Subrahmanyan Chandrasekhar who figured out why some stars go boom, and he did it at the age of 19. Feeling old yet?

Chandrasekhar calculated that if the mass of a white dwarf is 1.4 times that of our Sun, it would not prevent the force of gravity. It will collapse, but as it collapsed it would ignite a runaway chain of fusion reactions and Bam! Supernova. So mass is the key to the galaxy’s greatest fireworks show.

What if Wormhole formed near the earth?

There are two ways to reach the limit of Chandrasekhar Limit. The first way is by leaching another star nearby. If a white dwarf is in a binary system it can pull matter from its partner until, like all unhealthy relationships, it ends with a fiery explosion. It is called TYPE I SUPERNOVA.

A TYPE II SUPERNOVA starts with a single star that was huge in the first place. A star needs to be at least 8 times more massive than our Sun so that one core is heavier to light that giant space candle.

Stars that massive doesn’t stop at fusing carbon and helium into oxygen as ours will. They burn neon, oxygen, and silicon to keep the fusion running. But once they create iron, they are ready for it because iron uses more energy for the fuse.

It is a balance of gravity that pushes the star and increases the heat and pressure from the star’s core outward.

When fusion cannot be maintained in a star, gravity wins, and the star contracts, converting protons and electrons together into neutrons, opening up a wave of neutrinos that will exert a large external pressure. This causes a pressure drop and collapses so quickly that will produce very large shocking waves that cause the outer part of the star to burst.

Shrinking the outer layers will also close the thick inner parts. When these layers become heavier in each other, heavier elements are formed and distributed in space. The explosion also releases elements such as carbon and oxygen that would otherwise be locked into the star’s core, so the death of a star gives us life.

Once the explosion merges into a nebula, it turns out to be a ball of densely packed neutrons called a neutron star that lies just a short distance away. If the star were indeed massive, the neutron would be crushed and become a black hole. And if the star was really huge, it would have to be so huge to explode, supernovas wouldn’t happen very often. In our galaxy, they only occur twice a century.

When will we see supernova with our own eyes?

A star on the supernova watch is Betelgeuse, burning from Orion’s shoulder. Betelgeuse is a red giant star at least 430 light-years away from us. When it explodes, it appears in broad daylight, but it likely won’t explode for another 100,000 years.

Betelgeuse is so far from the biggest star ever discovered. The snappily name R136a1 differs among the 265 solar masses. Such stars are pushing the upper limits of size, and their supernova will be mind-blowing.

The largest supernova ever seen was by an All-Sky Automated Survey for Supernovas or ASAS-SN. Named ASASSN-15lh, the explosion was 20 times brighter than all the stars combined in our galaxy. The explosion releases 10 times more energy than the Sun throughout its lifetime. Fortunately, it was 3.8 billion light-years away.

Why do stars explode? When a giant star runs out of fuel, it cools down. This causes the pressure to drop then the collapse occurs so quickly that it produces very large shocking waves that cause the outer part of the star to explode. And this is called Supernova Explosion.

These are enough for today. Comment what is your opinion about this post “Why do stars explode?”

Read More:- What does a theoretical physicist do?