On 24 May 2020, SpaceX launched a Falcon 9 rocket filled with 60 satellites into space. This marked the beginning of their new project called “Starlink“, which goal is to provide high-quality broadband Internet in the most isolated parts of the planet and also providing very low-latency connectivity to already well-connected countries or cities.

So Hi Guys, How are you all? Today we are going to read “Why SpaceX is Making Starlink?“. So be ready for this extremely informative journey. So let’s start. 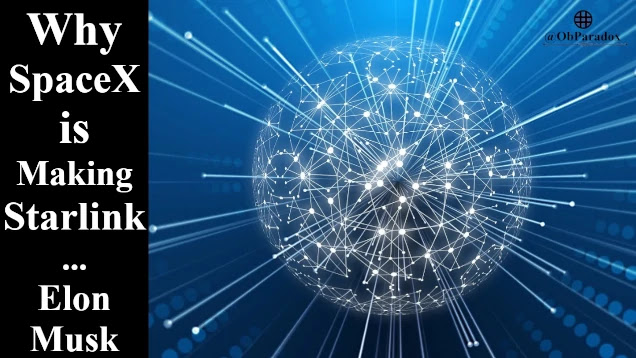 Why SpaceX is Making Starlink?

SpaceX goal is to make its broadband as accessible as possible, claiming that anyone on this planet will be able to connect to their network if they buy a pizza box-shaped antenna that they developing itself.

The launch of 60 satellites was the first of many launches. SpaceX has 12,000 satellites to launch over the next 10 years, dramatically increasing the number of satellites around Earth’s orbit. This will cost SpaceX billions of dollars, so they must have a good reason for doing it.

How this network “Starlink” work?

Let’s see how this network “Starlink “will work, and how it will compete with other existing Internet providers. Back in 2015, Elon Musk announced that SpaceX had started working on communications satellite networks. Also stating that there is a significant unmet demand for low-cost global broadband capabilities.

Around that time, SpaceX opened a new facility in Washington to develop these new communications Starlink satellites. The initial plan was to launch two prototype satellites into orbit by 2016 and to build an initial satellite planetarium by 2020.

But the company struggled to make a receiver that could be easily installed by the user for a very low cost. It delayed the program and the initial prototype satellites did not launch until 2018.

After the successful launch of two prototypes, Tintin-A and B, which allowed SpaceX to test and refine its satellite design. SpaceX kept very quiet about what lay ahead for the Starlink project until November 2018, When SpaceX received approval from the FCC. To deploy 7,500 satellites into orbit, on top of 4,400 that were already approved.

On May 24, the first batch of production satellites was launched into orbit and people around the world began to see a train of fast-moving satellites in the night sky.

This launch is a sign of things to come when this initial group of satellites is not fully functional. Then they will be used to other things like communications systems and Krypton thrusters to avoid debris and de-orbit autonomy.

Why SpaceX using Krypton for Satellites?

They use electric potential to fire ions from spacecraft to provide propulsion. Xenon is ideally used because it has a high atomic mass that allows it to provide more kicks per atom during inactivity and lends a higher storage density for long-term storage on a spacecraft.

However, SpaceX opted for krypton, but the rarity of xenon makes it more expensive. This ion thruster will initially be used to raise Starlink satellites up to 440 km from their release orbits to their final orbital height of 550 km.

They will also be used in conjunction with the ship control speed gyroscope located here and will allow the US Government’s Space Debris Collision Prediction System to adjust its orbits to collide satellites.

What about the Starlink Satellite Garbage?

When satellites have reached the end of their service life and stop functioning. Then they can use the same attitude control and thrusters in the satellite’s D-Orbit.

SpaceX has included all the necessary hardware on satellite to reduce the risk of space debris. In their FCC approval application, they claim that 95% of the components of the satellite will burn due to gravity during re-entry.

How fast will Starlink Internet be?

We know that the Starlink satellites will have 51.5 kg silicon carbide components. This will indicate that each satellite will have 5 different types of lasers.

These lasers, like our fiber optic cable on Earth, will use light pulses to transmit information between satellites.

Transmitting with light in space provides a great advantage of communicating with the light on Earth. However, the speed of light depends on the material, in fact, light travels 47% slower in glass as compared to vacuum. This gives Starlink a huge advantage which will likely be its primary money maker.

It provides the capability of low-delay information over long distances. In simple terms imagining it as a race between data packets. A user in London wants a newly adjusted price of a stock on the NASDAQ from the New York Stock Exchange.

If this information were to use a common route, say via AC-2 cable, which has a return journey of about 12,800 kilometers to make via our glass fiber optic cable.

This means that the packets of data will take approximately 0.063 seconds to make a complete round trip. And thus a latency of 62.7 milliseconds.

With additional stages that add to this latency, such as switching light signals to both ends of the optical cable, with traffic queues and transfer to our final computer terminal, this total time runs out at about 76 milliseconds.

Why SpaceX needs so many Satellites?

Latency is much more difficult to detect for Starlink. As we have no real-world measurements to go by, but we can make some educated guesses with the help of Mark Handley, a communications professor at London.

The first source of latency for Starlink will be during the up and downlink process. Where we need to transfer our information from Earth.

Each satellite of the Starlink project has a cone-beam with a view of 81 degrees. With an orbit of 550 kilometers, each satellite can cover a spherical region with a radius of 500 kilometers.

The scope of this coverage was 1060 kilometers in SpaceX’s originally planned orbit. By reducing the height of a satellite can decrease the area it can cover, but this can also reduce latency.

This is particularly noticeable for specific communications satellites operating in geostationary orbit at an altitude of about 36,000 km. The time it takes data to travel to the satellite at the speed of light is about 240 milli-seconds 369% slower than our subsea cable.

However, since Starlink intends to operate at very low altitudes, the up and downlink theoretical latencies may be less than 3.6 ms. That’s why SpaceX needs too many satellites in its constellation to provide worldwide internet.

Each individual Starlink satellite has four-phased antennas. The directional beam was an essential part of SpaceX’s FCC approval application, as thousands of satellites transmitting indirect radio waves would cause significant amounts of interference with other communications methods.

How will Starlink Satellites transmit Information?

Once that data is received by satellites, it can start transmitting that information between other satellites using lasers. Each time we expect satellites there will be a small delay as the laser light changes to an electric signal and back again. But it is too small to consider.

Things get tricky here with using lasers because we need to accurately hit receivers on neighboring satellites to transmit that data.

Let’s take a look at how SpaceX’s proposed constellation will work. The first phase of 1584 satellites of SpaceX will be occupied by 24 orbital planes, with each plane having 66 satellites tilted at 53 degrees.

Communication between neighboring satellites in the same orbital plane is relatively straightforward. As these satellites will be in a relatively stable position with respect to each other.

This requires precise tracking, as satellites traveling in neighboring orbital planes travel incredibly quickly and will move in and out of view. That means the Starlink satellite will need to be switched to a new satellite in this network.

This may take time, the best data I can find is about a minute for the data relay satellite system of the European Space Agency, a geospatial Internet planetarium currently operating that allows European imaging satellites and other time-critical applications. Is designed to serve.

Starlink can be fast, but will not be instantaneous, and thus has 5 optical communication systems, which maintain a stable connection to 4 satellites at all times.

Best Example, Why Starlink is best?

If we now use this system, we can reduce the latency to 43 milliseconds, with our transfer speed using the speed of light in a vacuum, with the shortest path possible, from New York to London and back.

Even if we do the shortest route possible with an optic fiber that is not present, it would be about 55 milliseconds, a 28% decrease in speed.

The actual current return travel time for your average Joe is about 76 milliseconds, as we saw earlier. 77% reduction in speed. This is a big deal for two financial markets operating out of these cities, in which millions of dollars are transferred in fractions of a second, having low latency would be of huge benefit in capitalizing on price swings.

In fact, this will not be the first time a communications company has invested extensively to specifically serve these groups.

The Hyborian Express Cable is a privately owned optic cable that currently has the lowest latency connection between the NY4 data center only in Securus, New Jersey, and the LD4 data center in Slough, England, at just 59.95 milliseconds, compared to our best time Is 39.4% slower.

The previous best time was held by AC-1 cable at 65 milliseconds. At a cost of $ 300 million, this 5-millisecond increase in speed was justified to connect the entire Atlantic.

Imagine how much these time-sensitive industries would be willing to pay to increase the speed of 17-milliseconds. It becomes more valuable when you realize that the difference at this time increases with increasing distance of transmission.

London is a relatively short distance from New York. The improvements for the London to Singapore transmission will be even more pronounced. For each additional kilometer, we rapidly increase the potential gain in speed.

SpaceX plans is to connect every human on this planet to the internet.

SpaceX does not plan to serve this super-fast Internet for just a few customers, they primarily advertise this system as a way to connect every human on the planet to the Internet, and these people must have a lot of bandwidth to serve.

The Internet has been one of the most fastest-growing technologies. 4 billion users will connect to this internet using the Starlink terminal, which will cost around $ 200, it will still be outside the purchasing power of many third world citizens, but this is a start and one of the currently available receivers like the Kymeta version It is cheaper than it is priced at $ 30,000.

Elon Musk says that these will be flat enough to fit on the roof of a car and other vehicles such as ships and airplanes. This will allow Starlink to compete with traditional Internet providers.

It is estimated that transferring 4G to 5G wireless connections to the US would cost about $ 150 billion in fiber optic cabling alone over the next 7 years. SpaceX plans to complete its entire StarLink project for less than $ 10 billion.

Each Starlink satellite costs around $ 300,000, which is already a huge cut in the cost of communications satellites. SpaceX is also saving on launch costs by use of their re-usable rocket Falcon 9.

If everything goes according to Elon Musk’s plan, Starlink estimates that behind the membership of the Premium Stock Exchange generates $ 30 billion to $ 50 billion in revenue each year, reducing their current annual income by about $ 3 billion.

And this is an important part of Elon Musk’s long-term goals. The money generated from Starlink can go on the research and development of new rockets and the development of the technology necessary to monetary the funds and martian colonies.

For now, the project is simply connecting the world even more and potentially opening the way, the widely available Internet will help solve this problem.

So these are enough for today. Comment what is your opinion about this post “Why SpaceX is Making Starlink?“. Thanks for reading.