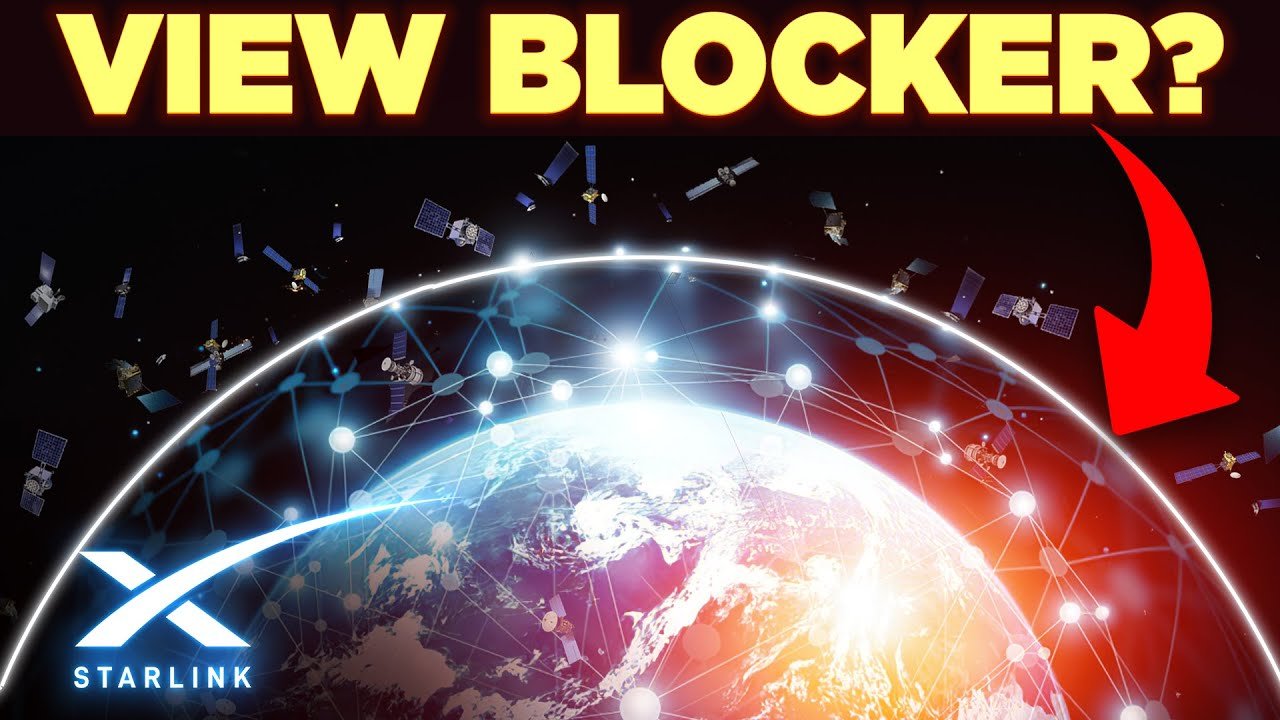 Will Starlink Satellites Limit Astronomical Observations?: With over 9,200 tonnes of space objects already floating around earth’s orbit, over 26000 satellites, and another 18 constellations in development by SpaceX, Amazon, and OneWeb collectively, the space community is not only concerned about possible collisions anymore, but they’re now also concerned about light pollution limiting astronomical observations.

Does the Starlink constellation pose a real threat to astronomy or is it just another unnecessary panic from the experts? Sixty Starlink satellites were launched into space in 2020 from SpaceX’s Cape Canaveral launch site this year on a Falcon 9 rocket.

This batch of sixty rockets joined an already present fleet of 120 other satellites which were launched in May and November of 2019. By the end of 2020, there were a total of 1,500 Starlink satellites in orbit.

The batch of sixty satellites was visible to the attendees and panel members of the American Astronomical Society in Honolulu, Hawaii to spot them. Despite the intensity of the Honolulu city lights, the satellites were clearly visible in the form of dozens of light beams speeding from west to east in a single line owing to their low orbit altitude.

This congregation of experts at the American Astronomical Society spotting SpaceX’s satellites would later that very morning strengthen the attendance numbers at a special session.

The association spent that session discussing the effects of the Starlink satellites and the mega-constellations of such satellites that SpaceX has proposed.

Ever since the first Starlink satellites went up in May of 2019, these professionals among others raised alarming concerns and complaints that they will soon find it difficult to conduct observations of space using their telescopes.

Indeed, such concerns are with merit. Satellites interfering with the astronomical observation process is not a new phenomenon at all as any object on Earth that reflects the sun’s rays will leave a trail in an astronomical image of the type produced by telescopes; according to experts such as Pat Seitzer who was a former professor of astronomy at the University of Michigan.

He further expressed frustration at the fact that hundreds of objects, as in satellites, will pass in view of an observatory. He says that as an astronomer he would really like for no more satellites to be sent up into orbit and the present number of satellites already hinders his work.

Starlink satellites are really sending astronomers to overdrive as they are quite apart from other ones. In terms of number and brightness both, they are quite different.

At an altitude of 300 kilometers, the satellites are bright enough to be seen by the naked eye even in a city with light pollution. They will still be visible to the naked eye at their operational orbit of 550 kilometers away from the cities.

While astronomers may have been aware that SpaceX was planning to launch Starlink satellites, they didn’t expect them to be that bright.

“What caught everyone, principally, by surprise was the sheer brightness of the ‘string of pearls’ going across the sky,” said Jeff Hall, director of the Lowell Observatory in Arizona and chair of an AAS committee that handles light pollution and space debris issues.

Even SpaceX was also surprised as they were testing out a novel spacecraft design in a new design architecture. Based on what information is available from SpaceX, the satellite’s reflectivity is most increased when it enters a ‘low drag’ position in orbit.

Reflectivity is also greatly facilitated by a unique design that was intended to properly beam the signals down to Earth for its characteristic fast internet speeds. SpaceX believes they understand what makes the Starlink satellites so bright so they are testing ways to make them less reflective.

A few satellites are being coated with a kind of dark ‘paint’ with proprietary technology named DarkSat. As of 2021, tests are still being carried out and adjustments are still being made to make it as effective as possible.

There will still be many unmodified satellites up in space so it accomplishes little in the way of soothing the concerns of astronomers worldwide.

Elon Musk has directed SpaceX to cooperate and discuss with the American Astronomical Society since May 2019 and the leader of the AAS has had plenty of good things to say about SpaceX’s conduct from in-person meetings and teleconferences.

Many others in the astronomy community have quite sharply criticized SpaceX but the AAS have been one of the few groups who have worked closely with them. According to them, SpaceX has been quoted: “Very very proactive.”

Tensions are still quite high though and Ethan Siegel, an astronomer has harshly criticized the AAS for making such statements while SpaceX was still launching unmodified satellites.

He even compared it to the appeasement of Nazi-led Germany by Great Britain before the start of World War II. He asked: “Are we Elon Musk’s Neville Chamberlain?”.

Clearly, there is much hostility directed against SpaceX for their ventures. To the AAS, SpaceX has reassured them by stating that they greatly value the science of astronomy and they won’t impede it in any way.

While SpaceX and the AAS said that they have worked well together to try and mitigate the brightness of the Starlink satellites, they haven’t made clear how much their brightness would have to decrease in order to be considered at least acceptable by astronomers.

AAS has also further said that they were working with SpaceX to try to identify the “targets they will need to hit” on reducing the brightness of the Starlink satellites but they did not specify those targets.

The initial goal could be to make the satellites dim enough to not be visible to the naked eye anymore. That would, at the very least, address some of the broader public concerns about the effect Starlink has on the night sky, which some astronomers raised during the AAS conference session.

“The night sky itself is a cultural artifact,” said Chris Impey, a professor of astronomy at the University of Arizona. “It seems terribly shortsighted and, essentially, technologically arrogant to assume that there’s no cultural impact.”

Ruskin Hartley, executive director of the International Dark-Sky Association (IDA), said at the AAS conference that protecting the night sky from the visual impact of satellites like Starlink has become a major priority for his organization.

According to him, the IDA represents those who see the merit in the status of the night sky as a cultural artifact. To be fair, one cannot help but think that they are indeed correct. Losing the night sky to satellites would be a real tragedy.

A survey of IDA members, he said, showed they were “deeply concerned” about what will happen to the appearance of the night sky should the full Starlink constellation, and others, be deployed.

He agreed that the satellites should be too dim to see with the naked eye and called on “shared stewardship” of the sky among all companies planning satellite constellations to limit their visual impact.

Even if Starlink satellites, and those from other constellations, are made dark enough not to be visible with the naked eye, they could still be bright enough to pose challenges for professional astronomers.

However, those limits vary from telescope to telescope, making it difficult to come up with a single limit. While Starlink has received most of the attention, astronomers are aware of potential issues with other constellations.

OneWeb has six satellites in orbit launched last year and Jeff Bezos’ Blue Origin also plans to rival Starlink quite closely with their own constellation of satellites that are likely to be just as bright as Starlink’s.

One thing is certain and that the world governments are likely to allow these aerospace companies to launch their own satellite internet services. This will fill the Earth’s orbit with countless satellites constantly reflecting light off the sun and making astronomy very difficult.

The question that remains then is whether technology for astronomy can come up with its own solution. Maybe a new kind of highly sophisticated telescope could assure astronomers that their expertise won’t be rendered nonexistent because of artificial satellites.

Astronomy cannot be allowed to become impracticable. It is still quite an important field in aerospace and space science and new discoveries can be made in the field.

Do you think SpaceX should stop? Or maybe the astronomers should focus on finding a solution themselves? Let us know what you think in the comments below.

Thanks for reading till the end. Comment what’s your opinion about this information “Will Starlink Satellites Limit Astronomical Observations?”.