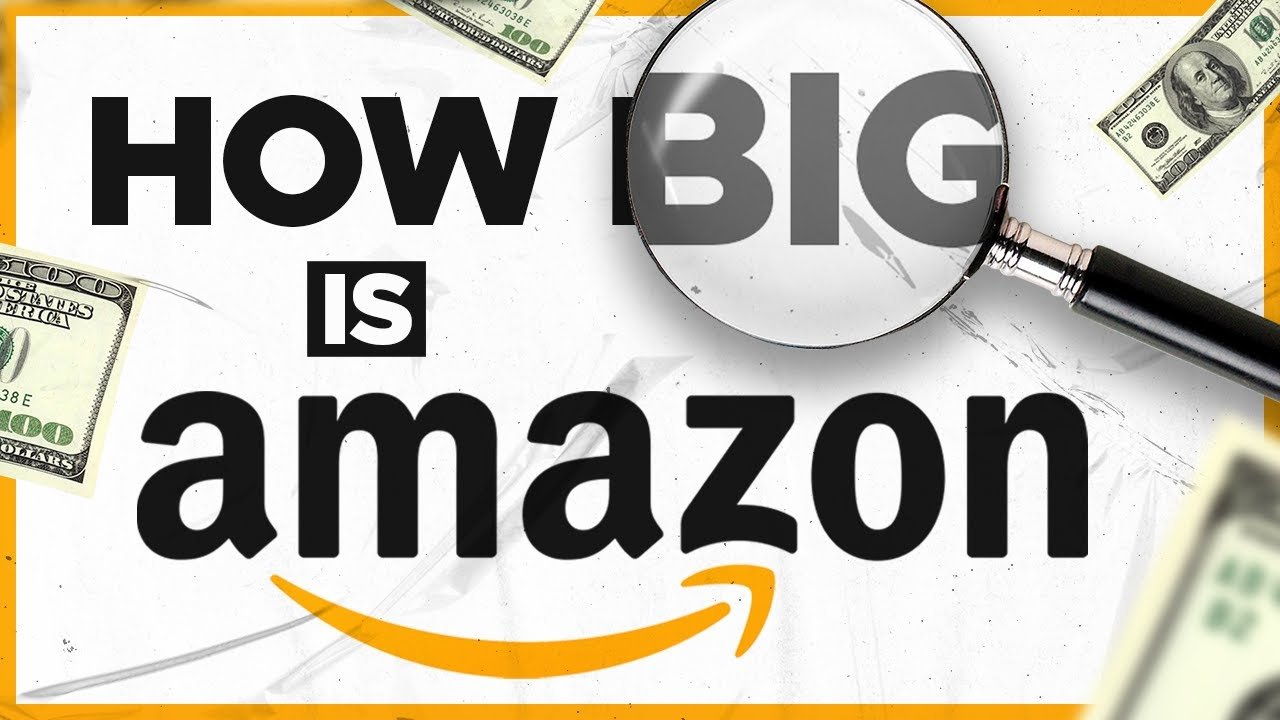 You Can’t Imagine “How Big Is Amazon?”: Jeff Bezos‘ e-commerce juggernaut is a ruthless monster, taking on traditional businesses and brick-and-mortar retailers by the dozen in his insatiable mouth.

But did you know that one of its subsidiaries essentially does internet work? Or that someone else wants to take over your healthcare? One bit of Amazon wants to deliver alcohol to your house party, while another is eager to fix your toilet.

Join us now as we bust out the facts and investigate how big is Amazon?

Amazon’s raw data is in itself a marvel. Last year, the company reported revenue of over $386 billion. Its total value is $1.4 trillion, which is larger than the next nine largest U.S. retailers combined.

About $11,000 worth of goods are traded on its platform every second, and last year the firm delivered 3.5 billion packages, one for every two humans on Earth.

It is the world’s second-largest private employer after only Walmart, but that certainly doesn’t count some 5 million sellers who sell goods through the platform, a quarter of a million of whom have $100,000 in sales during 2019. More than.

Faster Premium Delivery Club Amazon Prime now has nearly 150 million customers, with a large chunk of all US buyers. However, like an iceberg, much of the magnificence of the Amazon is invisible.

Amazon Web Services, or AWS, provides cheap, reliable server infrastructure on behalf of major organizations from Netflix to Disney, BMW to GE, Tinder to the CIA.

Being the IT geek of the world can seem like a pretty dull side-hustle for a fast-moving business like Amazon. But these days AWS is actually the most lucrative division of the business, accounting for 60% of all Amazon profits, or $50 billion a year.

As fascinating as AWS is, no discussion of Amazon’s might would be complete without a focus on its IRL footprint. At least AWS’s astonishing network of trans-oceanic cables under the Atlantic, Pacific, and Indian Oceans. and the Mediterranean Sea, the Red Sea, and the South China Sea.

On top of all that, Amazon also maintains 175 huge fulfillment centers around the world, with plans for many more. This help drive its core business – driving the drunk impulse to your home in a matter of days or, in some cities, hours. More on that in a moment.

Lesser known is the fact that Amazon is moving into an entirely bricks-and-mortar retail space, which has done more than anyone else to destroy.

Take Amazon Go, a network of about a dozen convenience stores located around Seattle, Chicago, San Francisco, New York, and London. There’s no cashier in the gimmick here—scan your phone along the way, as the cameras and weight-sensitive shelves detect what you buy, and invoice your Amazon account seamlessly.

A subtle variation on this is Amazon Fresh, the cashier-less grocery chain that is competing with smaller metro supermarkets, offering Amazon’s own ‘Solimo’ brand of food products for its own brand of coffee, and for pet food. Offers ‘Lifelong Complete’.

Three of these are already in London, and 10 are located in California and Illinois. It certainly has nothing to do with the upscale organic lifestyle brand, which boasts more than 500 outlets around the world, as with Amazon’s infamous buyout of Whole Foods.

Oh, and both Whole Foods and Amazon Fresh certainly deliver. Delivery has always been central to Amazon’s successful success. If anyone knows how to get stuff from A to B, it’s Amazon.

You must have seen their vans and trucks swinging around wherever you live. But did you know that its drivers typically use an app called Flex, which gives precious shifts to hungry gig economy workers, and the plugin supports a thriving secondary market in-app bots that allow drivers to constantly refresh landing pages? It helps in securing the best slot.

Small surprise, when the job pays anywhere between $18 and $25 an hour. When Amazon uses legacy state postal services — it often does — it’s in a mighty bargaining position.

So much so that the USPS broke with its old tradition and started delivering on Sundays to help meet Amazon demand. But that’s small fry.

Earlier this year Amazon struck a major deal on 11 Boeing 767s from struggling US carriers Delta and WestJet, bringing their air delivery fleet to 66 aircraft.

There are 86 planes planned by the end of next year, and they’ve made no secret of their plans to take on the big carriers like UPS and FedEx up to their game. Incredibly, Amazon Air is opening a dedicated airline hub in Kentucky later this year—essentially a private cargo airport.

In early 2016 the company was granted a license from the US Federal Maritime Commission to operate as a non-vessel operating common carrier for cargo shipments between China and the United States.

It’s part of Bezos’ dream of vertical integration across all aspects of sales and transportation, and it gives Amazon a profound advantage over rivals. Another acquired startup, Zoox, will also be carrying humans around via Amazon via a fleet of self-driving taxis soon.

So the Amazon is at sea level, crossing the ocean, flying through the sky, everywhere on land and potentially in space, if it finds the Kuiper satellite array, a rival to Elon Musk’s Starlink, from land. But Amazon isn’t in your house yet, surely?

Well, a bunch of stuff that you and basically everyone you know probably comes from Amazon. So of course, it is. There’s a good chance you’ve seen its streaming service, Prime Video, which not only carries an exciting array of legacy content but creates its very own cool content.

Sound of Metal just won two Oscars, they’re currently working on essentially terrifying television on Lord of the Rings, as well as cutting-edge comedies like Fleabag. Amazon’s music streaming service is considered by many audiophiles to be better than Spotify.

If you’re a gamer, you’ve probably used the streaming service Twitch, which Amazon bought in 2017 for 970 million. It generated $300 million dollars in advertising revenue in 2019 alone, and is supplemented by the Amazon Digital Games Store.

and Prime Gaming, which offers games for sale as well as free loot for popular titles like League of Legends and Grand Theft Auto. But Amazon’s presence in the home begins even before that, at your front door if the company finds its way.

Back in 2018, the company bought the Ring — which, as you can reasonably assume, isn’t smart wearable technology for your finger. Instead, it’s a smart doorbell that allows you to remotely check who’s calling, and even provides access to your smartphone.

The Amazon Ring isn’t just for forgetful housewives who’ve lost their keys. The firm is expanding its Amazon Home Services division, which deploys an army of mobile house-cleaners and recently began hiring technicians to help you with everything from assembling your new bed to installing catflaps. Will do everything until the stubborn toilet is unblocked.

And thanks to Amazon Ring, you don’t even have to be home when they’re at it. That’s not the only way to clean up Amazon. Alexa, the company’s omniscient AI assistant, is listening quietly and offering useful advice from more than 50 million Amazon Echo devices.

Inspired by the friendly, courteous, and helpful computers of Star Trek, it has already been woven into the fabric of daily life for millions of daily users.

Amazon’s lead scientist in charge of the Alexa project, Rohit Prasad, is working to make Alexa even smarter, not only being able to follow instructions through hundreds of thousands of apps — but also known as skills. — but actively anticipating what you need later, even before you do.

It can be just as rich as updating your Uber order to make up for a delayed flight. Or as nifty as remembering you need vanilla essence to make your gran’s birthday cake this weekend, and subtly taking you through your Echo earbuds right down the aisle at Whole Foods. Have to go

This is a great time to take a quick look at the huge range of hardware Amazon produces in-house. The company’s consumer electronics workshop in Sunnyvale California is called Lab 126, a clever nod to Amazon’s logo, where A is 1 and Z is 26.

The Kindle was the first hit product from the LAB126, which went out of labs in 2007. Later models – they update regularly – offer smart features like ‘color temperature analysis’, and the ability to sync across multiple devices on which page you are currently on.

There’s also the Kindle Fire, a cheaper rival to the iPad. Amazon Fire TV, or Fire TV Stick. The Amazon Echo — which, by the way, includes seven microphones for earwigs on your innermost needs and needs — has plenty of versions.

Dot, Buds, and Spot. The fancy bells-and-whistles Echo Studio Edition, or Echo Show that includes a screen, and the Echo Auto in your car.

Bet you’ve never heard of Echo Frames, Amazon’s effort where Google Glass left off, or the Echo Ring, which this time is actually a piece of smart wearable technology just for your finger. The less said about the LAB126’s failed Fire Phone, the better.

So far Amazon has bought processing chips from Intel, but the leadership of its AWS division will soon start using the Graviton chipset, which has been developed since its acquisition of Israeli firm Annapurna.

These Graviton chips, with a third currently in their second generation, use the power-efficient ARM architecture, just like the new generation of Apple computers. Think this is crazy?

Did you know that Amazon, the owner of the exclusive rights to several DC Comics graphic novels featuring Superman, Green Lantern, and Watchmen, is also in the superhero business? And it owns ComiXology, a cloud-based digital comics platform.

This can be seen flying in the face of another major recent effort from the company — in the notoriously difficult business of healthcare. By acquiring Pill Pack in 2018 for $753 million, Amazon obtained a license to operate pharmacies in most of the United States.

Using its vast distribution network and commercial strength, Amazon is now able to get medicines cheaper and faster than rivals to its customers. It even interfaces neatly with the US healthcare system, albeit with a slick app that only asks for a social security number from a user.

Amazon pharmacy vice president TJ Parker said it was hoping to transform an industry that “can be uncomfortable and confusing”.

The company’s emerging Amazon Care division strives to bring a lot of different services, from general practitioners to top specialists, under one umbrella, accessible through a friendly interface.

Of course, critics have suggested that handing over all your health information to a tech giant isn’t necessarily the smartest move. Oh, and by the way, Amazon is also very much in the business of being a critic, owning both IMDb and Goodreads.

We can go on – ever heard of Amazon Pay, which is PayPal’s rival? – But you get the idea. How big is Amazon? Amazon is, to use technical colloquial, a huge killer. what do you think Is it too big? Tell us in the comments.

Thanks for reading till the end. Comment what’s your opinion about this information “You Can’t Imagine “How Big Is Amazon?”.