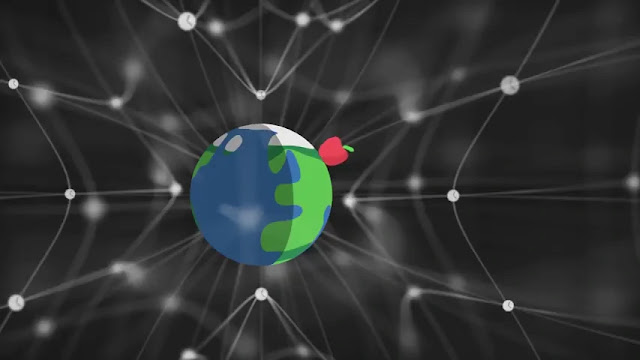 A New Way to Visualize the Theory of General Relativity

The goal of this article is to show different representations of the theory of general relativity and to present a completely new one that I have not encountered yet. However, it has many properties.

The idea behind this new representation is to make the best possible use of this article and especially its temporal dimension. To faithfully reproduce what mathematics tells us.

In middle school and then in high school we learned that free fall can be modeled by a force, that is the force of gravity. This force allows us to predict the motion of objects. Saying that they are attracted to each other and especially to massive objects like the earth.

However, this description is only an approximation and fails when the pull is very strong such as the path of mercury around the Sun. It was in 1915 that Albert Einstein proposed a new theory with a rigorous mathematical model that made it possible to describe freefall more precisely.

For Einstein there is no such thing as a force that acts at a distance, it is the fabric of the universe that deforms and makes things fall. To understand this very complex principle it is important to design visualizations that make it more intuitive.

The representation most commonly used is that of a large elastic sheet on which massive objects are placed. By deforming the fabric under its own weight, heavier objects pull everything in their direction like a stone in a bowl.

Firstly, this image has two advantages, it is very simple and intuitive and it helps us to understand that bodies attract each other indirectly through an implicit fabric space-time, in which the geometry can be changed.

However, although it is very broad, this way of presenting general relativity has a large number of problems that make it not very rigorous. In this article, we’ll try to improve this image by making four major changes.

1. Flatten the objects on the surface of Space-Time

To begin with, the image of the elastic sheet indicates that objects are laid out like marbles in space-time. Whereas in reality, space-time is the fabric of the universe in which they are contained. So one improvement we can introduce is to flatten the objects on the surface so that it is clear that they are not external but contained within space-time. 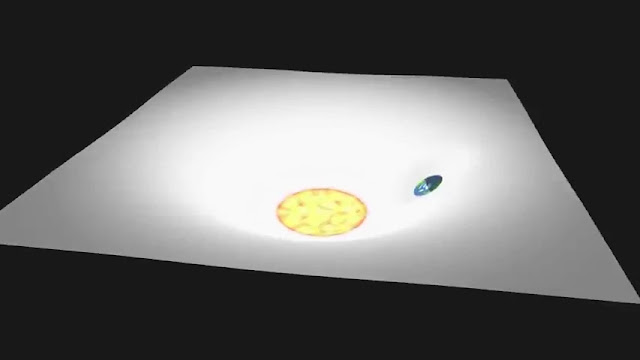 Next, one of the biggest problems with this representation is that it explains gravity by gravity. This scene seems to answer the question of why the apple falls to the earth, is it because the apple is pulled downwards causing it to fall like a marble in a bowl? 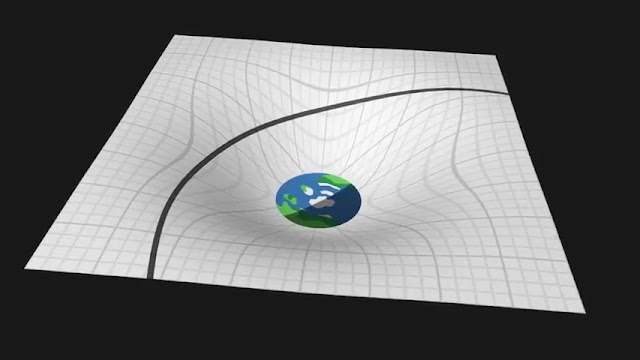 But it is not acceptable to explain gravity inside space-time using gravity outside space-time, so we have to find a better explanation. In particular, it is more rigorous to say that if objects follow a well created by the earth it is because they move in a straight line but within a curved geometry.

Objects move straight when they fall but the curvature of space-time gives us the impression that these trajectories are deflected. To understand this we can imagine the surface of a sphere on which two ants will move north.

In the beginning, the two paths are parallel and we can think that as they go straight ahead, the two paths will never cross. Although the two ants meet at the North Pole, it is possible thanks to the curved geometry of the sphere, on which the straight lines draw closer to each other inside space-time. 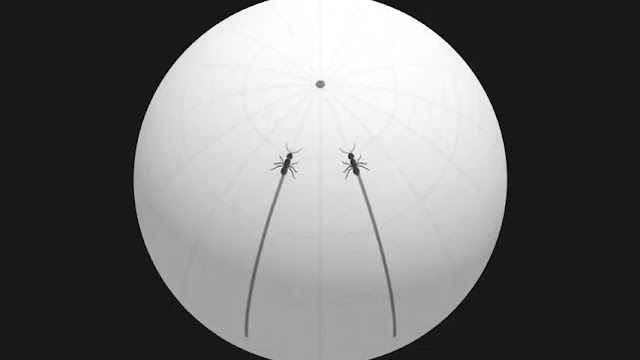 The phenomenon is the same and objects tend to attract each other when they are following a curved geometry in straight lines. However, this picture of the elastic sheet is actually still misleading. One might think that if space-time can bend it is because of the existence of a higher dimension.

Here for example a two-dimensional sheet appears to be bent in the third dimension. In fact, it is not and the mathematics of relativity does not require any higher dimensions to bend the universe. Therefore it is better to represent this sheet not from the side, but from above with a grid to show the curvature. While we are here it allows us to restore the three dimensions of the space we live in.

Finally, the most important issue with this representation is that our diagram completely ignores the time dimension. Space-time is a four-dimensional object that has three dimensions of space but also has a dimension of time that can bend and curve equally. 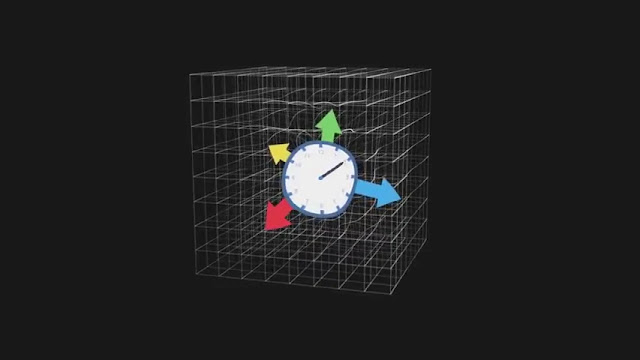 It is strictly impossible to faithfully represent four-dimensional geometry and, therefore, we have to find a trick. The first idea would be to add small clocks to our diagram at each point on the grid. In this way, the space grid becomes the space-time grid and we understand that time can flow differently depending on where we are. 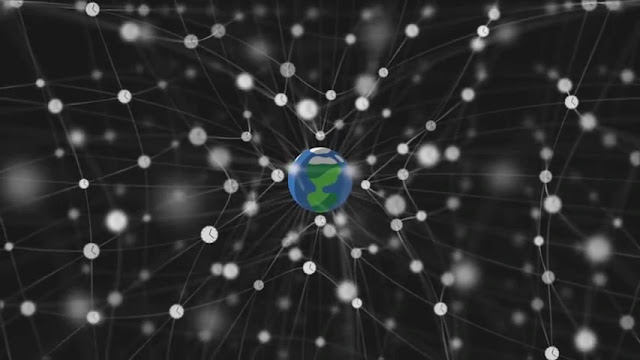 That being said, adding clocks to our diagram doesn’t give us much intuition and in particular, we still don’t really understand what objects fall into if we drop an apple, for example, Why does it start moving towards the earth?

To really make sense it is necessary to remove one dimension of space to represent the dimension of time. In fact, it is the time component of the curvature that explains gravity with such a diagram. 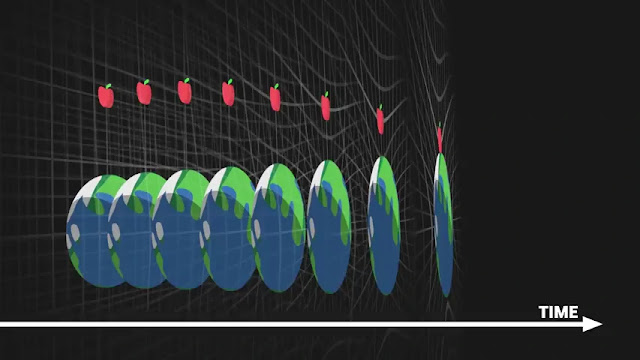 The apple moves in a straight line but the curvature of space-time rotates the orientation of this straight line between time and space. Therefore, we understand that if the apple falls towards the ground it is because it begins to accelerate with time.

The curvature of space-time produced by the Earth has converted this temporal motion into a mere spatial motion. Saying that as humans we do not experience the temporal motion of objects. When an apple is dropped it appears motionless to us, we do not understand the fact that it has sense over time.

From our point of view, we experience the world in the immediate aftermath, and on this diagram where objects form tubes over time, the world lines are not very intuitive.

4. Create an animation that includes time

So our final step will be to quickly cut this diagram to create an animation that includes time. The curvature of the universe that causes straight lines to dive into the Earth becomes the speed of contraction. 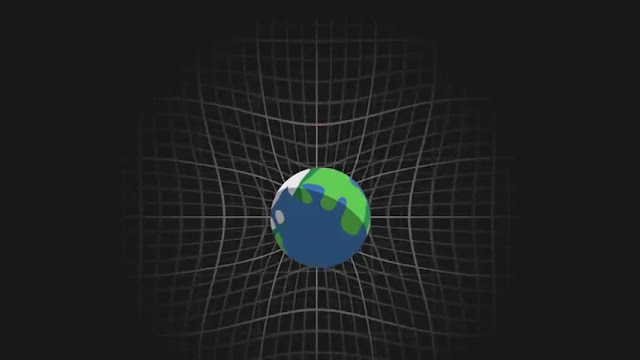 The rate of this contraction is constant and eternal because the curvature of space-time, which depends only on the mass of the Earth, is always the same. However, it is very important to understand that the geometry does not actually shrink. The fact that straight lines meet is what gives this impression of contraction.

The phenomenon is pretty much the same on the surface of a sphere, the curvature is constant on the sphere but the straight lines seem to converge continuously. It is this representation that I find most attractive for visualizing Earth’s general relativity because it is the very massively distorted space-time that gives it curvature.

To us, the curvature of space-time appears as an endless contraction of the grid. In technical terms, we say that the volume between geodesics decreases with time as the curvature causes this grid to shrink in what we call the inertial frame in freefall.

With respect to this grid, a body that is not subject to any force will maintain its momentum. Thus if we drop the apple without any initial velocity because no force acts on it then it will remain motionless relative to the grid but as the grid shrinks, the apple will fall.

With this image from relativity, it is also easy to see that the planet’s surface is constantly accelerating upward because it is always going against the natural motion of the grid.

Finally, if we throw an object aside with the initial velocity no force is applied to it and so it will continue in a straight line within the grid. But as the grid shrinks, the object is continually pulled back toward Earth, just as the Moon orbits the Earth and the Earth orbits the Sun.

So these are enough for today. Comment what is your opinion about this information “A New Way to Visualize the Theory of General Relativity“. Thanks for reading.