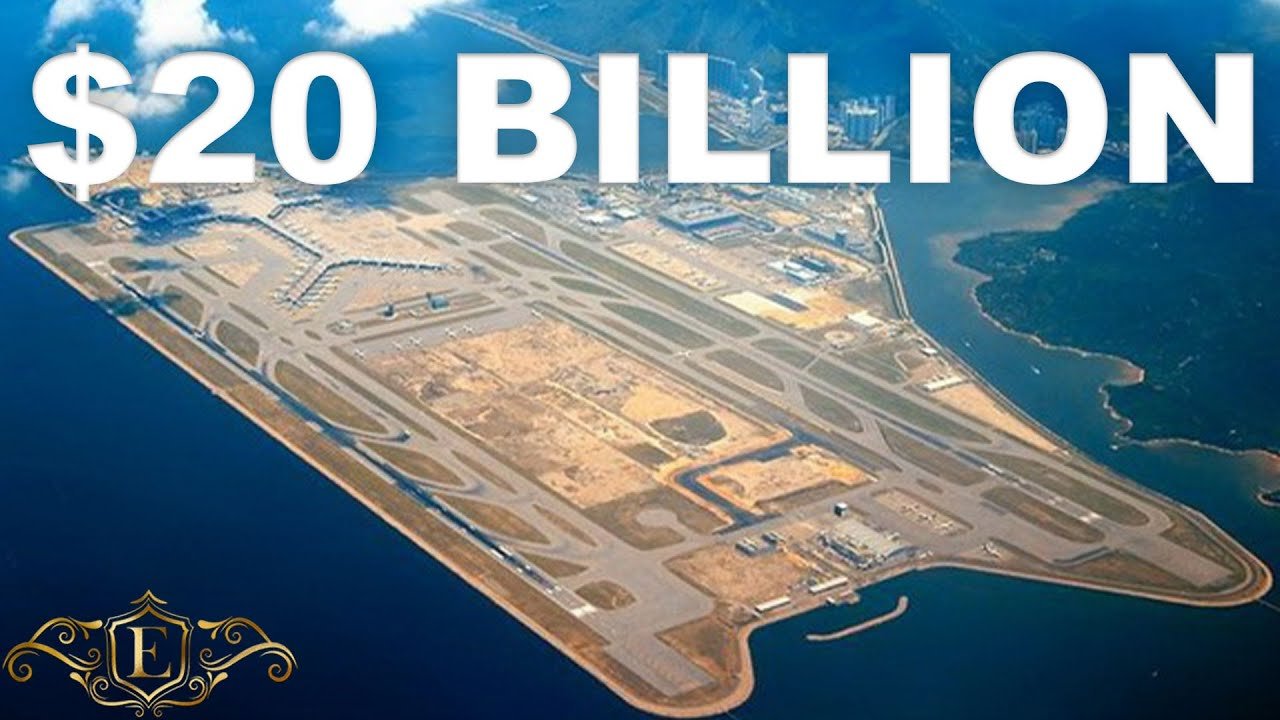 Take a Look at This Japan’s $20 Billion Airport Island: Three miles off the coast of Japan lies a monumental monument to human ingenuity and ambition. At the size of two and a half thousand football fields, it contains the tallest building in the world and took an estimated 10,000 workers ten million man-hours to build.

Kansai Airport typically processes 920 flights and over 30 million passengers annually. Not bad, when you consider that it is already sinking underwater in the early morning hours of the Gulf of Osaka.

How did the engineers only pull it off over the years? And how long can it withstand the threat of rising sea levels? Join us today to investigate how Japan built the world’s largest floating airport.

During the 1980s the city of Osaka and its surrounding region was going through a crisis. The rival city Tokyo was attracting tourism and was a big part of the national export business, thanks in no small part to its shiny new Narita International Airport.

In contrast, Osaka’s Itami Airport was aging badly and was surrounded by densely populated suburbs, making any expansion impossible.

In Japan, where 80 percent of all land is mountainous, flat spaces for building things like airports are at a premium and are almost always densely populated.

Even though the Japanese government was in a mood to snatch land from landowners for the greater good, the experience of building Narita Airport – the strong protests against the Tokyo project that led to thousands of arrests and seven deaths – make it a non-starter. Osaka had to start thinking outside the box to develop new air capacity for the city.

Japanese city planners have tinkered with artificial islands in the past to compensate for limited land availability during the economic boom years of the ’60s. But building an island on the scale needed for a large international airport would require a different magnitude of ambition and ingenuity.

In addition, the Gulf of Osaka is notorious as a center of deadly seismic activity. It is also prone to unpredictable and destructive typhoons, such as a famous 1934 hurricane that caused the water in the bay to rise completely 10 feet, killing 3,000 locals.

At least the project won’t have to grapple with local discontent – ​​in addition to disruption to fishing lanes, with binding payments for the local fishing community dealt with sensibly early.

A Crack team led by starchitect Renzo Piano – renowned for designing the Pompidou Center in Paris and The Shard in London – set to work straight away. The selected site, three miles from the sea, had a depth of about 60 feet, a layer of soft alluvial soil lurking

This material is familiar to marine engineers, but at this distance from the coast, a significant tangled base layer of dilute clay, about 1,000 feet thick, would need to be subdued to support the entire airport.

Using core sampling techniques and educated guesses, civil engineers estimated that the airport island could sink anywhere between 19 and 25 feet into this filthy mess before eventually settling. In the interest of cutting costs, project leaders kept their fingers crossed and expected to sink only 19 feet.

Then, curiously, they proceeded with the construction. To reinforce those softer clay layers, about a million pipes were drilled deep into the ocean floor.

These were then filled with sand, and the pipes were removed, leaving a million or so columns of sand to absorb moisture from the surrounding sponge-like soil. Then it is expected that it will settle and support the weight of the airport.

The soil was squeezed even further by a five-foot-deep layer of sand on top of the pillars. The next phase involved the construction of a sea wall, the first leg of which was seven miles long.

Huge cliffs were dropped from boats and maneuvered in place by daring divers – at least one of whom had a leg on one of those massive boulders after a turbulent tide. Eventually, the sea walls rose proudly to 75 feet above sea level.

The wall was coated on its south and west-facing sides with 48,000 concert four-pointed blocks, designed to dissipate and deflect the formidable force of the oncoming currents.

Two and a half years after the project began, it was time to fill the gap in the middle of the wall with enough soil until 1989. No easy task. It took three years for a fleet of 80 ships to transport the excavated material by various means.

Some of the soil was extracted from the bottom of the creek, while separate giant teams excavated soil from three local mountains on the ground. Project leaders also imported some valuables from China and Korea.

Three different sizes of rock and gravel were used in the final mix, a measure that experts believed should help the ground remain solid in the highly probable event of a future earthquake. Eventually, slowly but surely, the island that would have the first phase of the airport emerged from the sea.

Meanwhile, a unique record-breaking bridge connecting the airport to the mainland was slowly taking shape. Giant floating cranes arrived and began lowering the first of the 29 giant pilings into the ocean floor.

Two years later, the 4,000-ton, 500-foot bridge module was lifted into place. The bridge—with a highway on the top deck and a railway on the bottom—are two miles long, and costs over a billion dollars.

The bridge’s design incorporates clever flexible joints, a smart move by engineers concerned about the future impact storm winds may have over the structure’s lifetime. Meanwhile, on the island, the presence of nature was already making itself felt.

In the spring of 1990, it was reported that the island was sinking. Of course, this was already expected. But the rate and extent of drowning worried everyone involved.

By March of that year, the island should have sunk a mere 19 feet. But it was already down 27 feet and was descending at least two inches every month. Another 11 1/2 feet of soil was immediately dumped on top, costing US$150 million.

Attempts were made to compact the soil quickly, using the apparent cartoonish method of repeatedly dropping 20 tons of weight onto the runway from 100 feet in the air.

The biggest problem was not just the subsidence, but the uneven way it was happening. Different parts of the island were sinking at different rates, and the planned terminal building would inevitably split and crumble over months if it were left unchecked.

Part of the solution consisted of adapting Renzo Piano’s design to augment the foundation with an eight-foot layer of crushed iron ore, to help the light fall off the structure at least as evenly and at the same rate as the island Can you

Although the simplest solution involves the installation of some 900 jacks in the foundation. These jacks – on top of which the terminal superstructure rested, all 3 million tons of it – incorporate sensors to keep engineers in check which parts are sinking, and by how much.

The relevant jack can then be adjusted to hold those massive 30 steel trusses and 250 ribs that make this 1.7 km long Leviathan on a rough even keel.

The terminal building, rendered in the shape of a section from a giant toroid, is covered in about 5,000 panels of glass, each set within a rubber frame so as not to break in strong winds. The roof features 90,000 stainless steel tiles that have been painstakingly hand-applied and tested to withstand the stress and strain of a major earthquake or typhoon.

As you can imagine, the project also encountered some fairly strong sea winds during construction.

The spacious interior space is lavishly spread over four floors. It can be accessed from the mainline by car, train, or hydrofoil and has 41 gates, each of which travels no more than 90 seconds from the terminal concourse.

That 100-foot-high ceiling is designed with a curve in the top to mimic the pattern of air circulation and thus support the flow of fresh air. These colorful mobiles spin in invisible whirlpools and give you an idea of ​​how bright it is.

The jacks under the structure have certainly done their job. The columns are designed to move up to 15 inches at a time, they also accommodate iron plates that engineers periodically slide into the voids to keep the structure from collapsing.

It’s like tying a book under the wobbly leg of a table. Beneath the terminal, this elastic quality is still evident in the service stairs that have moved a step or two over time as the ground sank or these bizarre doors with unusually high frames.

Such interior remodeling was the least of engineer’s concerns when a deadly 7.2 magnitude earthquake struck the city of Kobe on January 17, 1995, killing 5,000 people, injuring 25,000, and leaving 300,000 Japanese homeless.

Yet despite being only 18 miles from the epicenter, Kansai Airport remained miraculously unheard of, thanks to the variable-sized rocks in the island’s foundation and the ingenious deployment of sliding and rotating joints throughout the structure.

In fact, not only was the airport spared, but it was able to immediately jump into action as a staging area for emergency crews and the distribution of food and supplies to the stricken area.

Even those luxurious glass tiles were retained. Engineers could pat themselves on the back for word of the day, and then three years later when a powerful typhoon saw 130mph winds whip up the Gulf of Osaka.

Nevertheless, the airport was able to open the same evening, despite minor damage to the roof. In 2007 the airport – facing a large increase in passenger numbers, and buckling under heavy construction debt meant that owners were forking out $500 million a year in interest payments alone on the airport’s total $20bn cost – opened its second runway.

It is aimed at the low-cost carrier market and is fairly inexpensive, with a simple one-story terminal building.

Hurricane JB of 2018 caused temporary flooding of the airport, and a rapid increase in passenger growth after its bridge collapsed and collided with a tanker vessel. This is until the Covid pandemic saw a brutal 76% year-on-year drop in passenger numbers from 2019 to 2020.

And despite regular upgrades to the sea wall, some academics – notably Gholamreza Mesri, a professor at the University of Illinois at Urbana-Champaign – predict that the islands could be at risk of another heavy typhoon as early as the year 2023.

According to a breathless press release, the facelift “…will offer visitors immersion in a welcoming and experiential space.” ‘Immersion’ probably isn’t the word we chose, but anyway.

Thanks for reading till the end. Comment what’s your opinion about this information “Take a Look at This Japan’s $20 Billion Airport Island“.