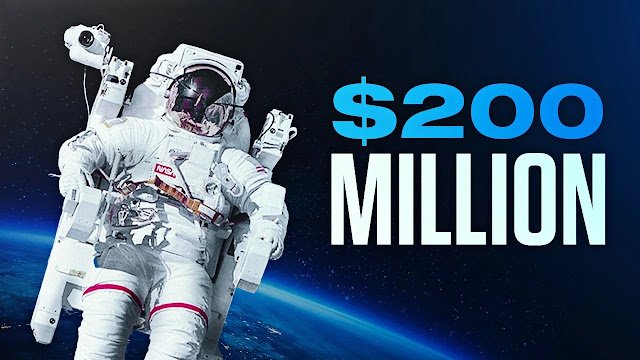 Like a threadbare pair of pants your partner has pleaded with you to just chuck out, NASA’s aging Shuttle-era spacesuits are long overdue date with the trash can.

One astronaut almost drowned wearing one, and high-profile spacewalks have been embarrassingly postponed lately due to their clunky unreliability. So what will NASA’s new suits actually look like? How come zippers are out, but diapers are still very much in? Join us today as we flex in front of a changing room mirror and ponder why NASA’s new spacesuit cost $200 million.

Every time NASA astronauts on the International Space Station go and stretch their legs on a spacewalk – this happens around eight times a year, give or take – they gingerly climb into a spacesuit designed in the 1970s and first deployed forty years ago in 1981.

Originally slated for a 15-year service life, but now well into their fifth decade, only four of NASA’S original 18 shuttle-era suits are presently on active duty. Seven are in assorted states of disrepair. Two were lost during the tragic 1986 Challenger explosion, another two perished in the 2003 Columbia disaster.

One unoccupied suit was blown up on SpaceX’s ill-fated CRS-7 cargo mission, another during early ground testing. Worryingly, this dwindling wardrobe of suits has started to show its age.

During one terrifying 2013 incident, Italian astronaut Luca Parmitano was forced to hastily abort an in-progress spacewalk because a blocked fan pump caused his helmet to fill up with water. In 2019, the historic first much-heralded all-female spacewalk was awkwardly postponed when it emerged there weren’t enough medium-sized suits in service that day.

If that wasn’t bad enough, NASA engineers have lately struggled to get hold of parts to maintain and repair this unique vintage hardware. Some components – for instance, the rather important-sounding ‘carbon dioxide sensors’ – are considered a heritage design.

One company that made these sensors for NASA doesn’t actually exist anymore. Worse, since NASA no longer has its own mode of transport to the ISS and has to bum lifts off the Russians and SpaceX, these suits can go nearly a decade without proper on-the-ground maintenance and repair.

So since 2009, NASA has invested an estimated $200 million on spacesuit development. And the crown jewel of this investment program is the new-look xEMU. Alright, the name might conjure images of some mutant flightless bird.

But there’s some nifty innovations on the xEMU – Exploration Extravehicular Mobility Unit – we’ll hopefully see bounding over craters on the moon when NASA’s Artemis mission climaxes in 2024. Let’s start with that new helmet.

Offering a wider field of vision than previous Astro headgear, the new helmet will incorporate high-definition shoulder cams so we sorry earthbound simps can enjoy a ringside seat at the final frontier. A smart HUD – heads up display – will give NASA’s heroic astronauts Iron-Man style access to mission-critical info at a glance.

A quick-swap protective visor will take the brunt of all those irksome dents and scratches from run-ins with fast-traveling extraterrestrial debris. That means shorter maintenance downtime between spacewalks.

A suite of embedded, voice-activated microphones in the helmet will replace the sweaty, slipshod ‘snoopy caps’ so loathed by today’s astronauts. The new gloves, which are tested to be so dextrous that astronauts can pick up a coin underwater, incorporate a clever system of heat radiators to protect astronaut’s hands from extreme temperature variation in space.

They’re tough enough to endure wear and tear from the horrific glass-sharp dust that covers the lunar surface, which previous missions found isn’t smoothed down by weather in the same way dust and rocks are here on earth. The new suit’s backpack is where the real magic happens.

Through a spectacular array of miniaturized tech, its life-support systems can keep the suit’s inhabitant alive and well for up to six days without any external input. Its brand-new carbon dioxide scrubbing system cleverly employs two separate cans of lithium hydroxide to capture exhaled CO2.

While one can is being filled up, the other is exposed to the vacuum of space and flushed out. The backpack’s onboard oxygen tanks operate at a higher pressure than previous systems, so they’re more compact, and the only real limit on survivability is battery life and food.

Several backpack systems – cooling, fans, water tanks – are buttressed with backup systems to smooth over any malfunctions. Also on the back of the suit, the Simplified Aid for Extravehicular Activity Rescue, or SAFER, incorporates sci-fi-style thruster jets to help wayward astronauts return to safety in the event they drift astray.

Some of the biggest innovations on the new xEMU suit can be found in the so-called pressure garment. Housing tubes that circulate water around the astronaut’s snug form to maintain a healthy body temperature, the garment also has to withstand bombardment from radiation, micrometeoroids and reduce atmospheric pressure, without sacrificing too much in the way of movement.

After all, there’s not much point in doing a spacewalk if you can’t move your arms and legs. In this spirit, astronauts on the Artemis program will likely be the most nimble ever, thanks to pressure-garment breakthroughs that help make graceful movement easier and less liable to cause exhaustion or injury.

The upper torso portion of the garment, for instance, houses a sophisticated array of bearings on the shoulder joints, offering astronauts greater flexibility to reach over their heads or across their bodies.

Similarly, the lower torso section has flexible bearings at the waist, hips, thighs, and ankles, which should mean next-gen moonwalkers can walk normally without bunny hopping around the moon in the cute but ungainly gait of their Apollo forebears.

Plus they’ll enjoy superior proprioception through their new-look snazzy hiking boots, which now have flexible soles. Ingeniously, designers have even crafted these suits so astronauts can control the level of internal pressure and move more freely.

So when they fancy kneeling to pick up an especially scintillating hunk of moon rock, they can reduce internal pressure via a handy front-facing control panel from 8.2 psi to a much less intense 4.3 psi. At which point the suit will bend more easily at the knee.

Top to bottom, this new suit is inspired and informed by lessons learned from previous suit designs. As NASA engineer Amy Ross put it at one xEMU press conference, “the two things I’ve learned is that zippers are bad, and cables are bad.” Zippers, it turns out, are especially vulnerable to being compromised by vicious flying shards of moon dust. Yikes.

Overall, the xEMU is all about tight seals and minimal seams, while still being easy to put on and take off, without compromising that all-important maneuverability. Each suite will be custom fitted to the height, size, and comfort of each individual astronaut.

There’s a clever all-new means of donning the suit through a quick rear-entry hatch system. Occupants can also climb in and out the more conventional way if they get stuck. Some problems never change, however.

Astronauts are still expected to wear a diaper, although these are only ever used in desperate circumstances. One important aspect of what makes these new suits so pricy is their inbuilt versatility.

Different components on the suit can be switched in or out in a modular fashion, depending on the nature of the mission. As you might expect, the precise configuration of kit required on a spacewalk is rather different to that needed for galumphing gaily across the moon.

And remember, one day this suit may even walk on mars. To be sure, NASA has been criticized for overspending on its spacesuit program. An excoriating 2017 Inspector General report blasted the space agency for blowing $200m without a single working spacesuit to show for it.

Still, all being well, xEMU will embark on a trial mission aboard the ISS in 2023, just one year before hopefully gracing the first woman ever to sashay across the lunar surface. Despite recent efforts to cut costs by involving private sector partners in the design and tender processes – through splashy competitions like the Astronaut Glove Challenge – the plain fact is new spacesuits are a cash-hungry undertaking.

As leading Smithsonian curator and spacesuit authority Dr. Cathleen Lewis puts it: “They’re complex, human-shaped spacecraft. We should think about them in terms of spacecraft, not as work clothes.” Or let’s borrow a term from the world of fashion, and call xEMU what it really is – an investment piece.

What do you think? Is $200m actually quite a reasonable price tag, considering it’s basically a miniature spaceship?