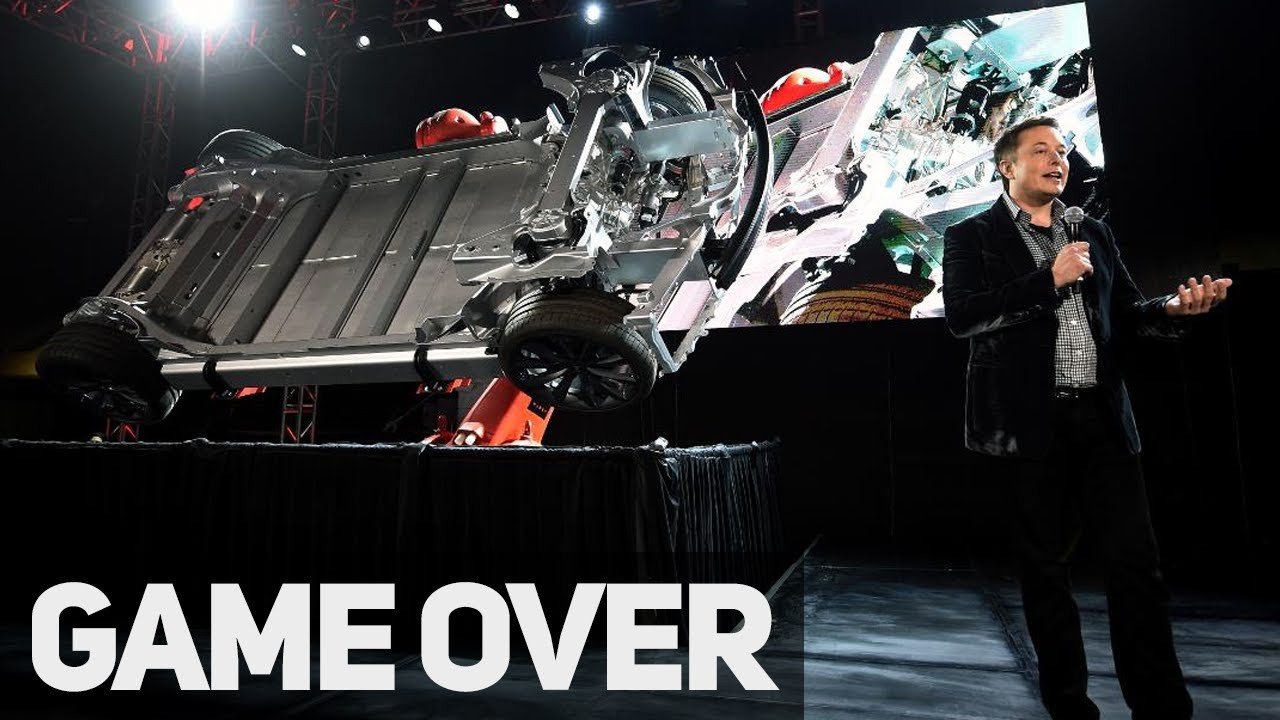 Elon Musk: The European Car Industry Is Shocked By This: Tesla sold nearly twice as many vehicles in 2021 as it did in 2020. That’s a significant improvement! Back in the 90s, there were very few automobile companies out there who were successful with their products. Today, it is hard to believe how much change we have witnessed in the automobile industry.

Car designs and concepts might be changing, but the process of making a car remains the same for manufacturers. There are still big brands who make cars using the old-school method, but for Elon Musk, that isn’t the case.

When people talk about the future of the automotive industry, this question almost always comes up. In all the interviews with industry experts, Tesla is referred to as the elephant in the room. The effect of the Tesla shock on the German industry and the changes that will take place in the coming years will be unprecedented.

The Mayor of Grünheide has mentioned that this is a lifetime opportunity to stimulate the local economy. Without a doubt, the presence of Tesla’s Gigafactory is expected to result in a boom for the local economy. Over the next three years, we might be looking at the creation of over 40,000 jobs.

An investor in Tesla and the CEO of Gerber Kawasaki, Ross Gerber, has said that he is not too concerned with the challenges that the electric car company is facing. I

n his words, it’s not a big concern in the sense that we know that the factory will open soon. He added that Tesla is extremely bullish on the European market, and the demand for Tesla’s cars is non-stop. Some people have raised concerns about the environmental impact of Tesla in the region.

They pointed out the water supply issue being a problem; Musk has dismissed the concerns saying that there are plenty of water supplies in the region. Tesla has stated in its annual impact report that the new factory in Germany and Texas will result in lower water consumption per vehicle.

Tesla also said in its report that climate changes affect water supply, and they are becoming increasingly scarce; that is why they are looking to reduce the amount of water they use throughout their entire production process.

An automotive analyst at Garner, Pedro Pacheco, believes that Tesla’s factory in Germany will gradually impact the European car market. The first difference is that customers in Europe wouldn’t have to wait for their cars to come from China.

The factory would help increase Tesla’s capacity from a manufacturing perspective. Pedro also mentioned that should Tesla decide to develop new models designed for the European market, the factory in Germany would be crucial to those efforts.

Germany is one of the world’s most critical automotive powers and the largest in Europe. So if Tesla wants to make its mark on the European car industry, it chose the right base of operations. There will be a lot of competition from car manufacturers like Volkswagen and Daimler, who are already pushing their electric lineups.

For most of last year, Tesla increased sales by 87 percent. This was when huge car manufacturers like Ford and General Motors shut down factories for months because of supply shortage issues. Tesla can conjure up critical components for its electric cars.

With this rate of growth, it will threaten the dominance of giants like General Motors and Volkswagen. A few years ago, analysts cited Elon Musk’s insistence on producing every component of its vehicles as the major reason why Tesla could match up to demand.

Larger car companies rely on outside suppliers for their software and computing expertise. The recent shortage of computer chips has affected manufacturers in this category, and Elon Musk’s decision has vindicated Tesla.

When the pandemic hit, and the car industry suffered a steep drop, people kept buying Teslas. When Tesla couldn’t get the chip it wanted, it took the ones it could get and rewrote the software that operated them to suit its needs.

According to Volkswagen Group CEO Herbert Dice, Tesla could spend just weeks rewriting their software before upgrading to a new chip. Tesla raised its prices during this period. Since the brand doesn’t rely on the antiquated dealership model, it can control its pricing.

Tesla is as much of a software company just as much as it is a car company. It continues to be innovative and doesn’t rely on traditional model years mid-cycle refreshes or complete redesigns. Instead, Tesla upgrades its vehicles using its free over the air (OTA) upgrade service.

Tesla’s focus on software and vertical integration is the key to its ability to adapt and overcome obstacles like the global chip shortage. Cars are increasingly becoming digital. Tesla was born in Silicon Valley; they wrote their code, and they never outsourced their software, so it gives them an advantage as the car industry moves with the tides of time.

Other car manufacturers are beginning to realize that cars are no longer defined by how they drive anymore. The software also plays a significant role. The realization has come too slow as Tesla is already far ahead.

Automotive makers like Daimler and Ford are trying to catch up by hiring engineers and programmers to help them design chips for their cars and write their software. Aside from its own stores and service centers, Tesla has its own network of public fast-charging systems.

Musk admitted that Tesla is building so much more of their cars than other manufacturers are doing. Other automakers primarily go to the traditional supply base and do what Elon Musk calls catalog engineering.

He says that kind of process is not very adventurous. According to some tumors and leaks, Tesla’s Gigafactory factory in Berlin is poised to begin the production of the Model Y this year. In recent photos that have been taken of the site, you can see 33 locally produced Model Y cars parked on the site.

Giga Berlin’s local observer Tobias Lindh has been keeping a close eye on Tesla’s Gigafactory in Germany. He said that he saw 12 Model Us whisked away some days ago and saw 33 more parked at the site as of January 5, 2022.

According to Lindh, three Model Ys were spotted being painted in Giga Berlin’s three colors: Mercury Silver Metallic, Deep Crimson Multi-coat, and Abyss Blue Multi-coat. Aside from the Model Ys, several other black and white cars were parked at the Giga Berlin site, but these colors have been leaked since October 2021 by Tesla’s mobile app.

Tesla has not yet received full approval from Brandenburg’s state office of the environment to produce or deliver vehicles, so the Model Ys parked at the Giga Berlin are likely to test units made elsewhere. We don’t know when Tesla’s Gigafactory in Berlin will receive full approval to start producing vehicles officially.

The state office of the environment has not provided any timeline when full approval will be granted to Tesla, but for Tesla, it seems the approval process is going smoothly. Throughout Tesla’s history, Giga Shanghai has been the best factory.

In 2021, this plant increased the annual production of cars it could manufacture. It even exceeded the initial capacity that was identified for the plant. The production rate is around 650,000 vehicles per year. That’s more cars than Ferrari has built since its existence. That number of cars means that cars are produced every 44 seconds at the factory.

Tesla hopes to replicate these massive production figures from Giga Shanghai in Giga Berlin. In the coming weeks, Tesla will begin operations in the Giga Berlin, producing a car every 45 seconds. That’s less time than most spend eating breakfast.

From the leaked images, the Model Y from Tesla’s Gigafactory in Berlin will be produced primarily for the European market. This means that more than 600,000 of the Model Ys will be delivered annually to every corner of Europe.

With the launch of the Giga Berlin, Tesla can ramp up production substantially and deliver more vehicles to customers in 2022, even if it does not reach full capacity by the end of the year. Looking at the number of vehicles delivered globally, Tesla vaulted past Volvo and Subaru in 2021.

Some analysts have predicted that when Tesla factories in Berlin, Austin, and Texas become fully operational and the Shanghai factory ramps up production, Tesla could sell more than two million units in 2022. This will put Tesla in the same league as BMW and Mercedes-Benz.

A feat that many in the industry have always thought impossible. This was an improvement from Tesla’s poor performance in 2018 when its production problems made it a laughingstock in the automotive industry.

Looking at Tesla, many other car companies have realized they need to copy Tesla and take control of most of their manufacturing processes. Tesla is no stranger to progressing at an alarming rate. Do you think they pose a threat to other manufacturers?

Thanks for reading till the end. Comment what’s your opinion about this information “Elon Musk: The European Car Industry Is Shocked By This“.

2 thoughts on “Elon Musk: The European Car Industry Is Shocked By This”