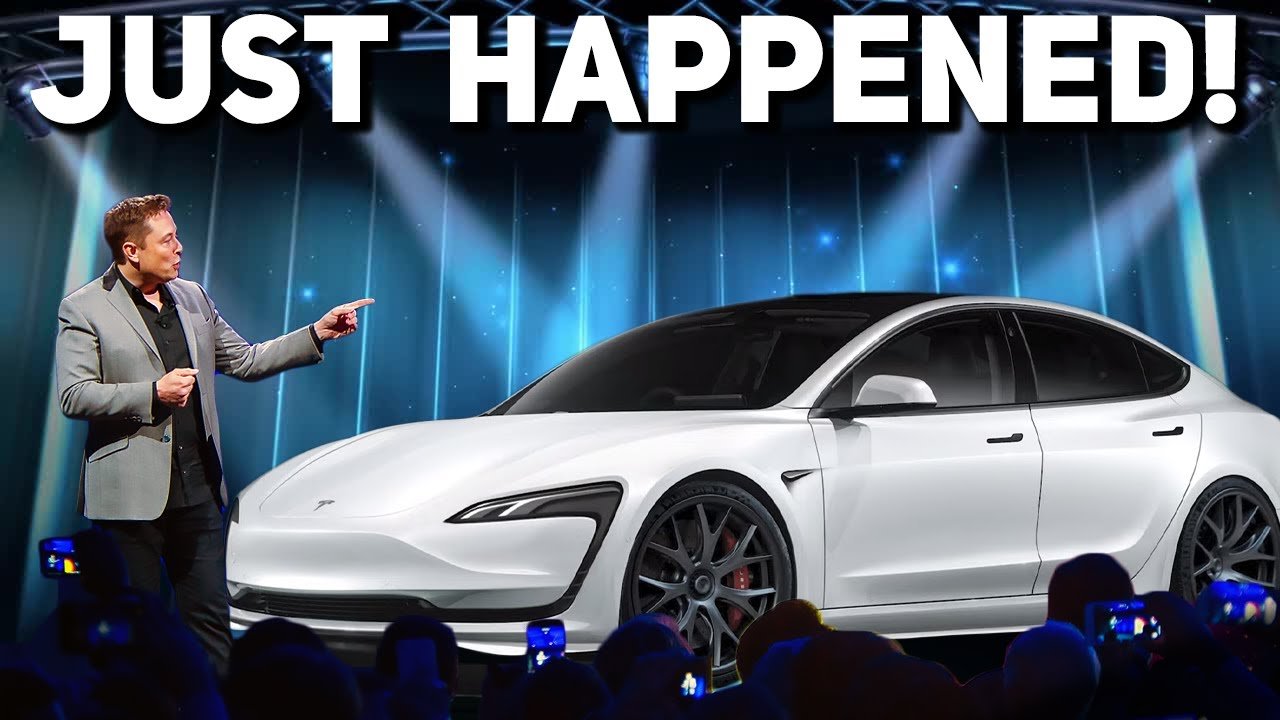 Elon Musk: Tesla Model 3 And Model Y Update Leaked:- Elon Musk has once stated that updating your car should be as simple as updating your phone or computer. Indeed, that has been the reality for all Tesla cars since the Model S. Over-the-air updates have brought forth many attractive improvements and features to Tesla cars over the years.

Because of that, we have to talk about the recent planned updates to the Model 3 and Model Y; they may surprise you, so make sure you stay to the very end of this article!

How Do Updates Work?

Tesla car owners may benefit from a variety of features, including software upgrades. A Tesla is already a fantastic car when it leaves the factory, but it just gets better with each new over-the-air upgrade. In reality, when it comes to improvements, the company continues to move at a breakneck speed, providing minor updates on a regular basis.

Tesla’s automobiles are distinguished by a few distinct concepts that set it apart from typical automobile manufacturers. Purchase began with internet ordering, rather than the dealership system employed by others, in addition to being electric automobiles in a world full of fossil fuel transportation.

The vast quantity of data produced by the global fleet of smart vehicles on the road, as well as continual software changes customized to those figures, maybe the edge that makes it more difficult for the older generation of automakers to keep up with Tesla’s quick innovation.

The vehicles receive large over-the-air upgrades once a month on average, with minor updates occurring more often. When alerted of an update through the mobile app or the car’s touchscreen, the owner can hit the yellow download symbol on the touchscreen to schedule or initiate the upgrade right away.

When you schedule anything, the symbol turns white, and you may reschedule it by tapping it again. Go to Controls and then Software as an alternative. If the message Update available is shown, tapping it allows you to schedule or install the update right away.

When a download starts, the download icon becomes green and stays that way until it’s finished. Once an update has begun, it cannot be stopped, and the car cannot be driven or charged while it is being updated. Because the software is so important to a Tesla vehicle, this is a precaution.

The scheduling tool helps the user to prevent driving or charging conflicts. The Tesla ‘T’ at the top of the car’s display may be tapped to see what improvements and functionality come with an over-the-air upgrade.

A new window will appear, and pressing ‘Release Notes’ at the bottom will provide any information about the newest version that is available. Tesla’s over-the-air upgrades enable its vehicles to improve over time, but competitor vehicles do not.

According to Gene Munster, managing partner of Loup Ventures, a venture capitalist, this is the case. If manufacturers can get the software right as the industry transitions from gas to electric power — and from human input to autonomous driving — he believes they will be able to “realize tech-like profits.”

According to Munster, Tesla is years ahead of its competition in this area, and his company predicts that the EV maker will earn billions in delayed software income by 2022. He noted Tesla has “built electrification, connectivity, and autonomy capability into its vehicles from the start.

In 2012, the manufacturer introduced over-the-air (OTA) software updates, which allowed it to send out system improvements on a regular basis. Other companies, he believes, are simply catching up. Tesla’s updates can improve range, power, braking, safety, and driver-assistance features, according to Munster.

According to the research, most legacy vehicle manufacturers are 3-5 years away from providing “significant OTA updates,” in part because the upgrades would require automakers to make more of their cars’ operations software-controlled.

According to Munster, the current beta version of Tesla’s “complete self-driving” functionality — and the fact that the company was able to distribute it via an OTA update in October — further underscores the company’s technological superiority.

When it comes to advanced driver-assistance systems, he believes Tesla is three years ahead of the competition. The cost of the “full self-driving” add-on, which is already $10,000, has risen steadily and will continue to rise as the technology improves.

Elon Musk has stated that the feature’s final worth might be “in excess of $100,000,” and that it may be moved to a subscription model, which would spread the money out over time rather than requiring an upfront purchase.

Even if they lack the experience, automakers that have been caught off guard are not fully out of the woods. Tesla isn’t the only firm in the world that makes AI processors for use in cars, particularly for self-driving capabilities.

Manufacturers must assess their alternatives carefully and recognize that they cannot do this alone and that they must collaborate closely with someone who has the skills and know-how to manufacture and iterate these products fast. And, because none of these automakers are likely to duplicate Tesla’s success, they should consider partnering with a business that has done it before, such as NVIDIA.

Because of the greater voltage of the new battery, some electronic components, such as the windshield washer fluid pump, must be replaced. The sluggish Intel Atom CPU in the Tesla Model 3 and Model Y will be replaced by a much faster AMD Ryzen SoC, which has already been spotted in Chinese units of the electric SUV and should significantly improve the responsiveness of the integrated infotainment system, which will be welcomed by tech enthusiasts.

The Model 3 Performance will be powered by a superior drive unit and the LG 5L battery, which has higher power restrictions than the predecessor and should make this model a little quicker.

According to Electrek, these adjustments will be applied to the corresponding EVs built in China and Germany, with Tesla’s US-based production facilities typically implementing such updates later.

In 2021, Tesla allowed users to use the external speaker to broadcast pre-recorded noises or music outside the car as a pedestrian alert sound. This function appears to be on the way to this “Superhorn,” which combines the horn, alarm, and external speaker.

Some people, on the other hand, would be disappointed since the range was not increased. According to Electrek, a Model Y Long Range owner loaded the software upgrade in his vehicle, increasing the EV’s range to 320-325 miles in 2020.

Previously, the EPA estimated range for the identical model was 316 miles, according to Tesla’s website. After upgrading, Model Y owners may observe a range boost of four to nine miles. The “improved efficiency” pertains to the operation of both the engine and the temperature control systems, according to a Tesla note accompanying the then-latest update.

Tesla went on to clarify that these savings had nothing to do with greater acceleration or temperature control system performance. However, there is another issue to be concerned about.

When temperatures dip below freezing in Alaska and western Canada, Tesla owners are compelled to drive their vehicles without heat in the cabin. The problem, which has been plaguing Model 3 and Model Y vehicles since last winter, began when the vehicles received a new heat pump system and were exacerbated by a software update.

Tesla owners have gone to Twitter to express their dissatisfaction, with one customer claiming that his family might have been murdered since Elon Musk is the only person on the company’s customer support staff.

Hour away from any service,’ reads the tweet. Musk, on the other hand, recognized the problem on Twitter, noting that resolving it was a “top priority” for Tesla. He revealed that the carmaker is releasing a software update to address the issue: ‘Firmware fix to recalibrate heat pump expansion valve is rolling out now,’ He posted.

Some Tesla owners, however, have uploaded photos of their vehicle’s heat pump, which looks to be broken or not operating. This indicated that a simple over-the-air update might not be sufficient to resolve the issue. Wick H, a Twitter user, weighed in on the conversation with an explanation for why cabins aren’t being heated.

‘Heat pumps are not designed for areas that get under 20F… the colder it gets there, the longer/more difficult it gets to draw heat. Add in wind and ice, and things really just don’t work,’ he tweeted. Wick H went on to say that at such low temperatures, refrigerant is impossible to transmit heat.

Several customers who were affected by the problem chose to get their vehicle serviced rather than wait. Tesla probably needs to recalibrate their approach.

Thanks for reading till the end. Comment what’s your opinion about this information “Elon Musk: Tesla Model 3 And Model Y Update Leaked“.