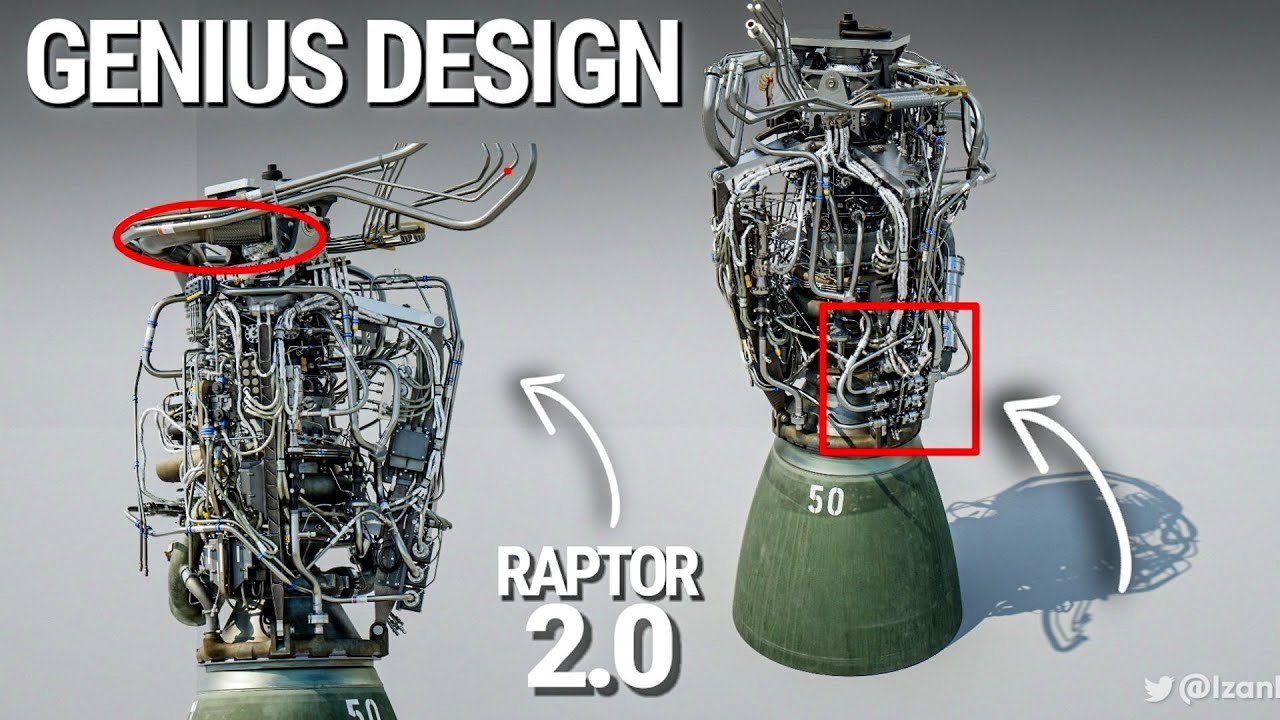 SpaceX Starship NEW UPGRADE Raptor Engine 2.0 Are Truly Engineering Genius: As is routine, SpaceX CEO Elon Musk has taken to Twitter to offer a few details about the status of Starship, its Raptor engines, and a few upgrades planned for both.

These latest details are focused on an upgraded version of the Raptor engine and on additional changes to Starship’s structural design and assembly process. According to Musk, as SpaceX continues to ramp up ground testing of the upgraded engine variant, “Raptor 2 now operates routinely at 300 bar main chamber pressure.”

For context, on February 10th, 2019, just days after SpaceX began testing the first full-scale Raptor prototype ever completed, the engine briefly reached a main combustion chamber pressure just shy of 269 bar (3900 psi). That narrowly beat records set by Russia’s RD-270 and RD-180 engines, the latter of which is used on ULA’s Atlas V.

It took 18 months before Musk revealed clear proof that at least one Raptor prototype sustained such high chamber pressures over a minute or more of steady-state operations.

Another ~18 months after that milestone, Raptor isn’t quite operational in the sense of supporting orbital-class launches but the engine isn’t far from its first and has since supported dozens of Starship static fires and seven flight tests – five of which occurred in a period of just six months.

Already, despite the fact that Raptor 1 or 1.5 engines have yet to even attempt an orbital-class launch, SpaceX has almost entirely moved on to a new and improved variant known as Raptor 2.

According to Musk, all Raptor ground testing at the company’s McGregor, Texas development campus is now focused on the new hardware, which reportedly features much cleaner plumbing and wiring.

The biggest change to Raptor 2, though, is an almost 25% increase in maximum nominal thrust over Raptor 1/1.5 – from around 185 to 230 tons (408,000-507,000 lbf). That’s partially enabled by widening the ‘throat’ of Raptor’s nozzle, which sacrifices a small amount of efficiency for more power density.

However, Raptor 2 also contains design improvements throughout to enable sustained, reliable operation at chamber pressures up to 300 bar – 10% higher than Raptor 1.5. SpaceX is well into the process of qualifying Raptor for Starship’s first orbital launch attempts.

According to that timeline, ten seconds shy of three minutes after liftoff, Starship’s Super Heavy booster will shut down and separate from the spacecraft. Starship will then ignite either three or six Raptor engines for a bit less than six minutes to boost itself within the vicinity of orbital velocity.

Curiously, the same timeline makes no mention of a deorbit burn, without which the first “orbital” test flight will technically be suborbital even if Starship is traveling very close to orbital velocity.

Regardless, the document confirms that Starship’s orbital insertion burns will be approximately 5.5-6.5 minutes long – the maximum stamina required from its Raptor engines, in other words. Rephrased, in its current design, Starship will never be able to reach orbit without Raptor engines capable of continuously operating for around six minutes.

Up until high-altitude Starship test flights began in December 2020, the extent of Raptor’s long-duration capabilities and thus the state of SpaceX testing was effectively a mystery.

Ultimately, as Musk notes, if SpaceX manages to boost “Raptor 2” to 230 tons of thrust, a Super Heavy booster with 33 mostly identical engines would have a peak liftoff thrust around 7600 tons (~16.8 million lbf), translating to a thrust to weight ratio of more than 1.5.

For a large rocket with liquid propulsion only, a thrust-to-weight ratio is very respectable and improves acceleration off the launch pad, reduces gravity losses in the first few minutes of ascent, and thus boosts overall efficiency.

Already, Musk’s implication that 33 engines could ultimately be installed on Super Heavy is a departure from comments the CEO made barely a month ago when he revealed a base increase from 28 to 29 engines with the possibility of expanding to 32 down the road.

Musk says that SpaceX has yet to decide if Raptor Vacuum will be commonized with Raptor 2, boosting its thrust, or if greater efficiency will be pursued instead.

Regardless, even with six 200-ton-thrust RVacs and three Raptor 2s, Starship would produce upwards of 2000 tons of thrust in vacuum, creating an upper stage with almost as much thrust as Falcon Heavy and a fully-fueled thrust to weight ratio of ~1.7 – even better than Super Heavy.

SpaceX’s engine testing facility on 4,300 acres of land in McGregor, Texas, just south of the city of Waco, is undergoing new development and testing related to the Raptor engine for Starship and Super Heavy.

With five test bays, the facility will soon become a hub for Raptor 2 engine assembly, with a new factory now under construction. On October 24th, Musk subtly live-tweeted one of the first Raptor 2 static fires, revealing that the engine reached a chamber pressure of 321 bar (~4650 psi) and briefly produced around 245 tons (~540,000 lbf) of thrust before destroying itself.

Now, a little over two months later, Musk says that Raptor 2 prototypes are routinely operating at 300 bar without major issues, meaning that they can ignite and safely shut down after burning for several minutes at those pressures.

In theory, given that 300 bar is Raptor 2’s targeted chamber pressure at max thrust, that means that the engine is now “routinely” operating at the level SpaceX wants and needs to take Starship to the next level.

It’s likely that one or several months of work remain before SpaceX can begin qualifying the first Raptor 2 engines (or, more importantly, hypothetical Raptor 2 Vacuum or Boost variants) for the first Starship or Super Heavy prototypes designed for the new engine.

Nonetheless, the rapid progress SpaceX has made in the first few months of Raptor 2 testing is extremely encouraging. Since September 2016, the Raptor engine to be used on the Starship spacecraft and Super Heavy booster has undergone test firings at McGregor.

The engines, which have been upgraded over time, are currently built at SpaceX’s main factory in Hawthorne, California, then transported to McGregor for testing. Flight units meant for the Starship program are currently tested at McGregor before being driven to the Starbase launch facility in Boca Chica near Brownsville, Texas.

The Raptor 2 is a future version of the engine soon to enter testing, and the factory will be capable of making 2 to 4 of these engines per day. This production rate is higher than a typical rocket factory, but low compared to an automobile factory.

As Elon stated in a tweet: “It [the factory] will be the highest output & most advanced rocket engine factory in the world.” He believes it will be needed to support high-cadence Super Heavy operations, including many flights to Mars related to the build-out of the planned Martian city.

Thanks for reading till the end. Comment what’s your opinion about this information “SpaceX Starship NEW UPGRADE Raptor Engine 2.0 Are Truly Engineering Genius“.