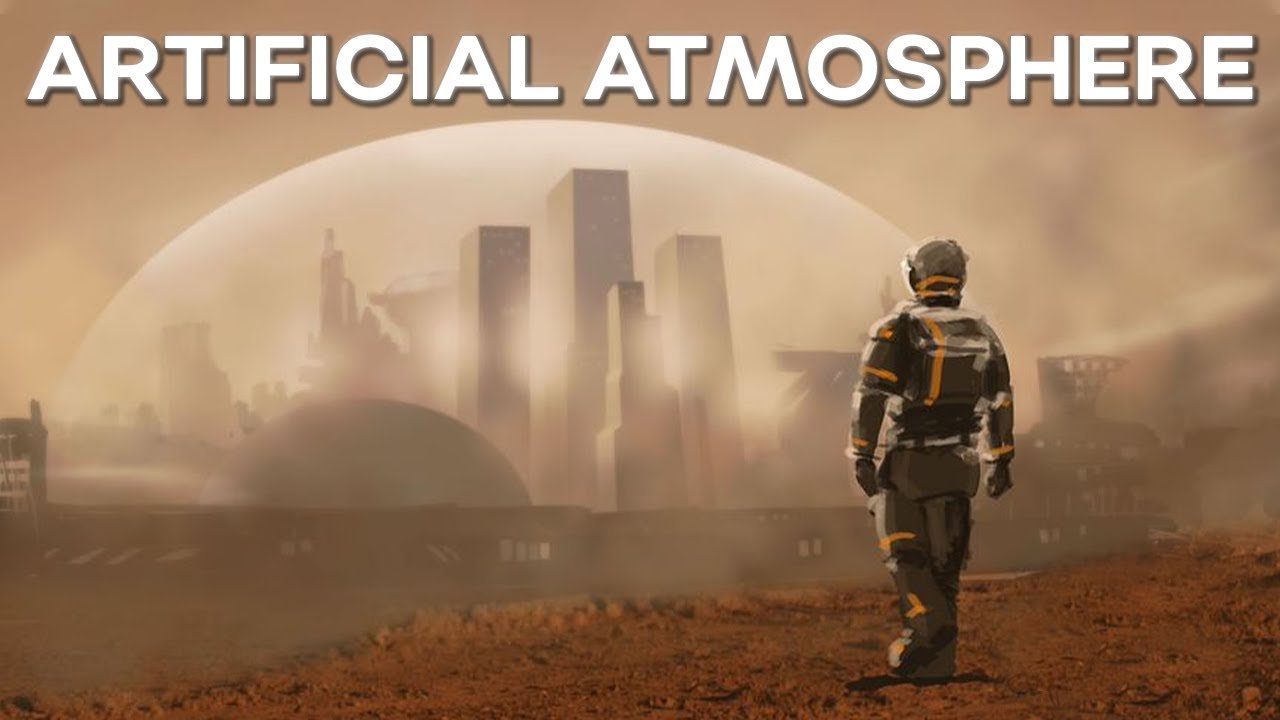 The Reality of Terraforming Mars: Mars has been a spot of attraction for everyone on Earth recently. You might have heard of organizations planning to go on mars. But for just a normal person, what will that really look like? Let’s talk about all of that in layman terms in this article.

A lot of organizations have sent their probes on Mars and many more are planning. It has also been a favorite theme in movies, with Martians coming to our planet. But the reality is a bit different. Humans are the ones going to mars and even capture it. The main question today is, How? And once we get there, how are we going to survive Long-term?

The red planet’s atmosphere is mostly carbon dioxide. The surface is very cold and the gravity is only about 38% that of earth. All conditions are not favorable for human life. But they can be changed. NASA has already announced its plan to send humans to Mars by 2030, and SpaceX plans to do so by 2024 only.

But once we get there we can use modern-day state-of-the-art technologies and models to terraform mars. In this article, we will discuss how we will live and flourish on mars. In the first section, we will talk about what happened to the red planet in the first place and then how we will build habitation, grow food and other necessities and survive on Mars.

Scientists believe Mars was very different from the way it is now. It had much more sustainable conditions for life before, with water flowing on the surface. Some even believe life might have existed on mars before.

The molten iron convecting in the planet’s core generated a powerful dynamo that sent waves of magnetism emanating out from the planet; this magnetosphere protected the planet from solar radiation. It was a time when fresh volcanic activities started building up an atmosphere comparable to that of Earth.

The heat trapped allowed the moisture to cycle around the planet as part of the hydrosphere supplying water for rivers to flow, with a potential of biology. However, over a period of time, this magnetic generation stopped because of the cooling of the planet’s core, and the panel was left vulnerable to the never-ending barrage from the sun.

Eventually, the air was stripped away and the surface was exposed. The water retreated beneath the ground as ice and mars became barren as we see it today. But scientists have a model to bring back the lost magnetism of the planet.

It’s one of the hardest methods but if scientists can figure out a way to execute it 50% of all the other problems could be solved. We can supplement the magnetic field by placing a magnetic device at the Lagrange’s position of the planet.

The competing gravity of the sun and planet counterbalance one another locking objects into a stable position between the two bodies. If enough magnetism can be generated at this point a trail can be cleared behind for mars to take shelter in if we humans are in fact capable of working together to finance design engineer construct and implement such a device.

With its magnetism recovering the atmosphere will begin to build up and trap more air and heat. Pretty soon dense clouds would rise over the martian skies providing the seeds of weather. Ice would dominate the contents of the clouds at first coming to the surface as snow or frost but with a building atmosphere eventually, water would converge in the air and fall to the surface as rain.

This will mark the foundation of a water cycle. Eventually, we would see a flow of rivers and pools over the martian surface. There is also another way suggested by scientists for tapping into resources of water.

A solar-powered device that will use a special metal-organic framework (MOF) to pull water out of the air in conditions as low as 20 percent humidity. This device can harbor about 3.2 quarts of water from the air in 11 hours using two pounds of MOF.

Such a device can be really helpful for making water readily available on the planet. The first step on terraforming Mars would be obviously reaching it first. In the past years, we have witnessed the change in the technology of landing used by NASA.

Now, many organizations are planning to land their landers and rovers on the red planet. Soon they will land humans too. But after reaching the planet scientists will study the planet for solutions of residing on the planet long-term. But what are the current models that have been proposed?

Well, NASA is already on this problem and there have been different prototypes for a sustainable habitat on Mars. The common idea among these prototypes is- they will be self-sustaining, sealed against thin atmospheres, and capable of supporting life for a long time. Just like the ISS, which has taught humans a lot to survive in unfamiliar environments, Mars space stations will be a challenge worth taking.

We’ll need things like environmental control and life support systems (ECLSS), power systems, docking ports, and airlocks so that crew can perform spacewalks to repair things that break or to add new capabilities.

Also, the trip to Mars will be a long journey. It will have psychological effects on astronauts. Even though they are trained for this. To cope with this, these prototypes are supposed to have larger space for each astronaut.

The scientists on the ISS who were in space simply needed more space! NASA also has a plan of keeping the base like an igloo. Also known as the Mars Ice Home, it is an inflatable inner tube-like structure that would incorporate materials extracted from the planet and encased by a shell of ice.

The idea behind using ice is that water is a very good shielding material against radiation. Radiation will be one of the most important challenges to solve on Mars. Though suits will be made more advanced but also the bases.

Prolonged exposure to radiation can cause cancer or even acute radiation sickness. We can also build underground bases beneath the surface, but the ice base is a better option. The daylight will be able to pass through without making it like a cave.

Mars is farther away from the sun than Earth and hence is cold. As mentioned above, without a thick atmosphere, unlike earth it is exposed to radiation and cold. Living on Mars will require special habitats that can provide warm temperatures (and breathable air).

Another challenge would be Growing food on Mars. Keeping the food and medicine supplies stocked on Mars is the best way to make a habitat self-sustaining, but with a thin atmosphere and reduced sunlight, it can be difficult to get anything to grow.

But there are some ways that scientists plan to grow food on Mars. Research suggests that martian soil does contain some of the nutrients needed for growing plants. But because of the extremely cold conditions, they need to be grown inside a controlled environment. Just like earth nutrients may vary on the martian surface from place to place.

Inhabitants would need fertilizers to make the solid rich in nutrients. Fertilizers help farmers to double or triple their crop yields and contain 5% or more of primary plant nutrients. These fertilizers also supply nutrients to the crops that some soils do not have. Experts suggest using organic waste or manure to do so.

Mars’s atmosphere is mostly carbon dioxide, and plants need this gas just as much as we need oxygen to breathe. Also, studies suggest that watering plants on Mars could require less water than on Earth. That is because water would flow differently through the Martian soil, thanks to the Red Planet’s gravity, which is approximately 38% that of Earth’s. This will allow the surface of the planet to hold more water and nutrients than the soil on earth.

Researchers are also developing sophisticated self-sustaining grow facilities to supply future astronauts with fresh fruits and vegetables. One such effort is being made by NASA in collaboration with the University of Arizona. It’s also called the Bioregenerative Life Support System or the BLSS.

It is a hydroponic growth chamber that doesn’t need soil to produce food. Bioregenerative life support systems are artificial ecosystems consisting of many complex symbiotic relationships among higher plants, animals, and microorganisms.

It starts with water enriched with nutrients. This nutrient-enriched water supports the root system of the plants. The system is mutually beneficial to people and plants, as the former expel carbon dioxide, which is absorbed by the vegetation.

The plants, in turn, produce oxygen as part of the photosynthetic process. When we think of mars we sometimes think of its future as greenhouses with plants and human civilizations colonizing with modern technologies. But those days are far away.

It will still take a lot of time to terraform mars. In the initial trips made by the scientists and astronauts, they will try to learn as much as possible about the planet. Since it differs greatly from Earth, survival is an important skill for astronauts to master.

The initial base will probably include habitat and a science lab. These modules will be much like the space station, but there will be differences. Microbial life is another threat to astronauts in space.

Without more research scientists cannot be sure that there isn’t any dangerous microbial life that could threaten human life. Things will get more interesting once the base is established and Astronauts learn the survival skills needed. Then slowly we can focus on making the planet self-dependent on resources and necessities.

Slowly the farming and water harvesting will start. Using the above methods mentioned scientists will try to Terraform mars and make it sustainable for living.

Today many enthusiasts like Elon Musk are already working on making mars a permanent human colony and they have a goal to send about 2,50,000 people to mars and set up a martian colony. In the coming years, we will see the first person on Mars and soon a colony.

The technologies will be more advanced and even change. But one thing is guaranteed: a bright future for space exploration. So what do you think about these goals of humans for a new venture to a new planet? What effects and implications does it have for humanity? When will we be able to fully terraform it? Also, we have to remember that mars will never fully be like the earth. Our Earth is special in so many ways, so let’s be conscious about that too!

Thanks for reading till the end. Comment what’s your opinion about this information “The Reality of Terraforming Mars”.

4 thoughts on “The Reality of Terraforming Mars”