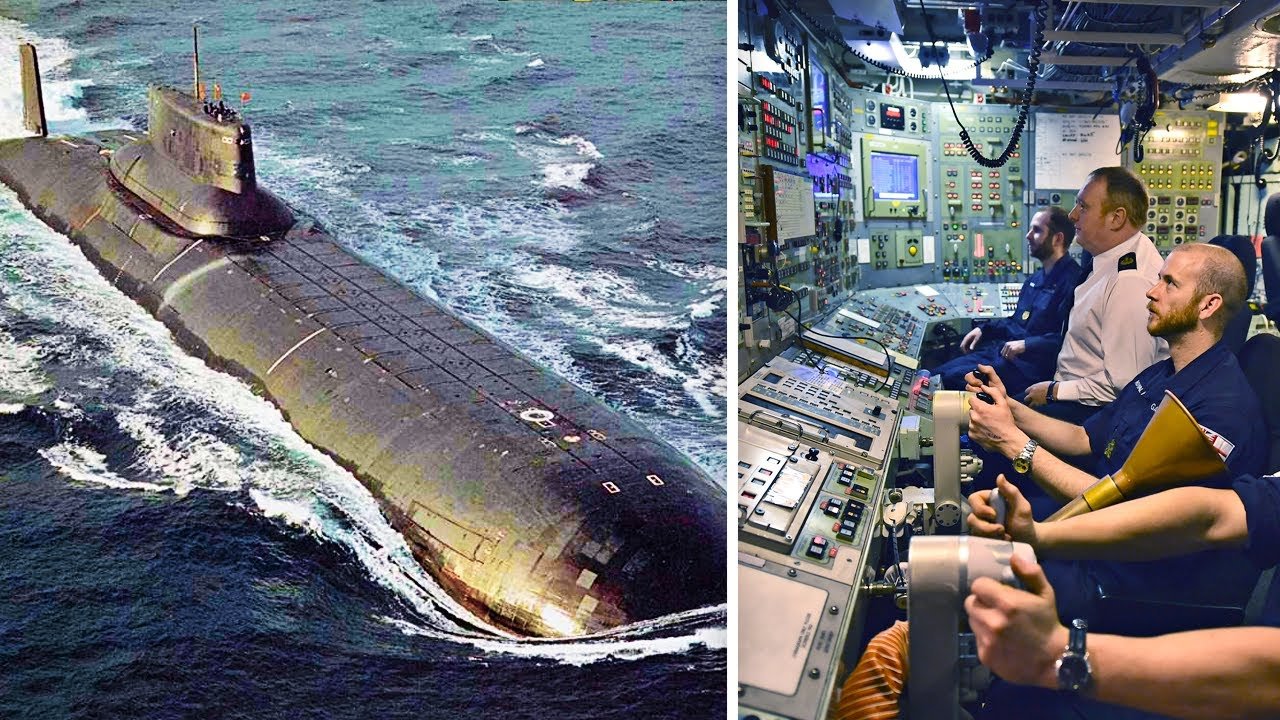 Take A Look Inside This World Largest Submarine: At over 175 meters long, the world’s largest submarine is almost twice the length of a standard rugby union pitch, but what’s it like to live inside, and how does it work?

This submarine can displace 48,000 tons of water – which is more than 19 Olympic-sized swimming pools filled. While it can carry a crew of 160 men at a maximum speed of 27 knots when submerged or 22 knots on the surface.

It is not built to cross the world’s oceans. Instead, it’s made to sit in a hostile environment for months – think the Arctic Circle and you’re on the right track.

Power comes from a pair of OK-650 reactors, which, unlike your car that almost certainly uses an engine or motor, relies on splitting atoms’ nuclei. Fuel comes from 21-45% enriched uranium-235, and each reactor produces 190 megawatts of thermal power.

With a solar panel producing around 200 watts, that’s about 1.9 million solar panels’ worth of power, assuming it’s a sunny day. For car fans, that’s around 50,000 horsepower or more than 300 modestly powered family hatchbacks.

It was first commissioned in 1980 and is the only remaining submarine of its type in service, although two still sit on the side as reserves. Another three have been retired, while the seventh of its type never made it to production.

This single submarine is the oldest of the bunch, with the others being built over the next decade. Its purpose was to defeat enemies during the Cold War; an answer to America’s Ohio-class submarine, known locally as the Akula, which means shark.

The average depth of the ocean is over 3,600 m, and the deepest section in the Mariana Trench is over 11,000 m deep. You may be surprised that this submarine is only tested up to 900 meters, but this is with good reason. Light struggles to reach these depths, making it nearly invisible, but the pressure exceeds nine megapascals or about 90 times that of the surface.

In 1990 Russia resumed work on this massive piece of engineering in a process that lasted more than a decade. It was not until 2002 that it was relaunched, almost completely rebuilt, brought to modern standards, and fitted with the latest hardware.

It is capable of launching ballistic missiles anywhere in the world, although it is only used for exercise purposes. There are no less than 20 launchers onboard for the RSM-56 Bulava ballistic missile, which may sound like jargon, but let me break it down for you.

Each missile measures around 12 meters in length and two meters in diameter, weighing over 36 tonnes. It’s good for targets over 8,000 kilometers away. In other words, it can almost scale the North Pacific Ocean, reaching the coastline of Japan from the Western sands of California.

Other armament includes four 21-inch torpedo tubes and two 26-inch torpedo tubes. To keep everything moving, the crews have completed many tests since its relaunch. 27 September 2005 saw the first Bulava missile test from the surface of the White Sea off the North coast of Russia near Finland.

Its first underwater firing followed on 21 December 2005, on the Kera Test Range on the far side of Russia. A further, and this time failed, test in 2009 resulted in a spiraling blue light which was spotted from Norway and Sweden. Captured in photographs, the people lucky enough to have seen this said it looked like a blue light emanating from behind the mountains, stopping mid-air before spiraling outwards.

Lasting around 10 minutes, and covering a large area of northern Norway, one of the country’s famous astronomers had initially believed it to have been a never before seen variant of the Northern Lights.

2010 saw, once again, successful attempts at shooting targets back at the Kera Test Range. While crews are trained to deal with immensely powerful weapons, they’re also expected to live inside the submarine for long spells of time.

After all, it’s capable of staying submerged for 120 days if not more – that’s around four months. You might not expect such a utilitarian vessel to be so lavishly equipped, but it’s no hostile environment.

Nicknamed the floating Hilton, because accommodation is so good, crews can expect similar styles of luxury to ships that occupy the water’s surface. Wooden panels line many of the walls, and plush padded chairs take the place of hard-wearing plastic alternatives.

The doorways are even full-sized, which is a real luxury in the military world. It doesn’t stop there, though. On rest days, or even on workdays, the crew can get a full workout in, using the onboard gym, before taking a dip in the submarine’s indoor swimming pool – yes, an underwater swimming pool!

It might only be around 2 feet deep, but the pool is designed to help relax the workers, and to provide them with a sense of familiarity. This is all before heading off to the sauna. But this is soon to become history, as the typhoon class submarine makes way for the newer, and smaller, Borei class.

What this means is that Russia’s typhoon will likely hold the title for the world’s largest submarine for many years yet, even beyond its retirement which is set to be sometime during or after 2026.

Looking toward the future, plans have been submitted for another Russian-built submarine that would absolutely dwarf the typhoon class submarine by comparison. Twice the length, the suggested vessel is not intended to be a military vehicle, but rather a transportation device for liquid natural gas under the Arctic ice.

There’s no word on the possibility, or feasibility, of this yet, but one thing’s for sure. It would be almost immune to piracy, making it one of the safest ways to carry expensive resources around the world.

If you had the chance, would you venture into the deep seas in a submarine-like Typhoon class Dmitriy Donskoy, or do you prefer to keep your feet safely grounded on terra firma?

Regardless, with or without its history as a military vessel that has the capability of inflicting huge amounts of damage, the world’s largest submarine is a sight to behold, and an extraordinary feat of engineering.

Thanks for reading till the end. Comment what’s your opinion about this information “Take A Look Inside This World Largest Submarine”.

2 thoughts on “Take A Look Inside This World Largest Submarine: Typhoon Submarine”