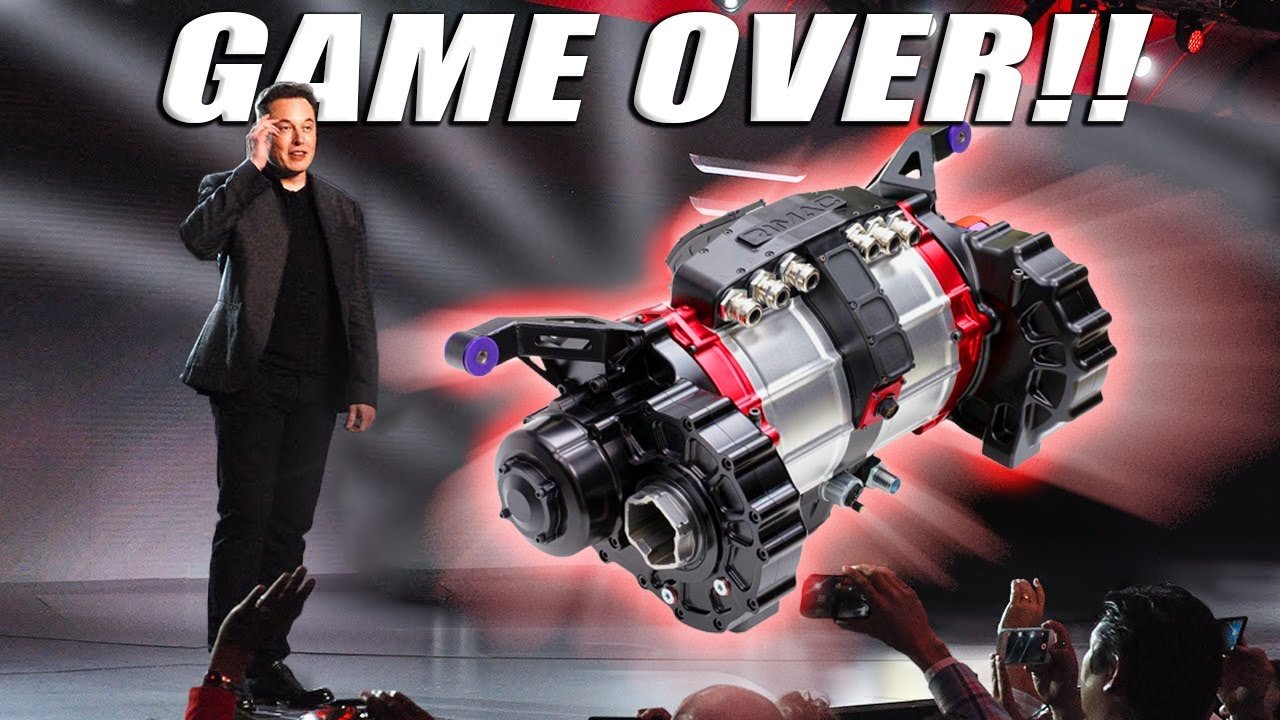 What is it about Tesla’s cars that makes them so successful? The design or the technology? If you’ve answered the latter then you’re correct. And as Elon Musk just revealed Tesla’s insane new engine, we will take a dive into why Tesla’s EV’s are dominating the industry with it.

History of Electric Propulsion Electric vehicles (EVs) originally appeared in the mid-19th century, when electricity was one of the favored means for motor vehicle propulsion, giving a degree of comfort and simplicity of operation that gasoline automobiles could not match.

In 1827, Hungarian priest Anyos Jedlik created the first rudimentary but functional electric motor, complete with stator, rotor, and commutator; the next year, he used it to propel a small automobile.

Professor Sibrandus Stratingh of the University of Groningen in the Netherlands built the small-scale electric car in 1835, and Robert Anderson of Scotland invented the first crude electric carriage around the same time, powered by non-rechargeable primary cells, between 1832 and 1839 with the exact year being uncertain.

In 1835, Thomas Davenport, an American blacksmith, and inventor created a miniature electric train driven by a rudimentary electric motor. Robert Davidson, a Scotsman, created a four-mile-per-hour (6-kilometer-per-hour) electric locomotive in 1838.

In the early 1900s, the first mass-produced electric automobiles arrived in the United States. The Studebaker Automobile Company started out in the automobile business with electric cars in 1902, but by 1904, it had expanded into the gasoline vehicle market as well.

However, after Ford Motor Company introduced low-cost assembly line automobiles, the popularity of electric cars has dropped substantially. Electric automobiles did not achieve much popularity at the time due to the limits of storage batteries; nevertheless, electric trains gained enormous appeal due to their economies and possible speeds.

For most of the twentieth century, the UK was the world’s greatest user of electric road vehicles. The popularity of electric automobiles has dwindled as a result of a number of factors. Improved road infrastructure necessitated a longer range than electric cars could provide, and the discovery of large petroleum reserves in Texas, Oklahoma, and California resulted in widespread availability of low-cost gasoline/petrol, making internal combustion engines more cost-effective to operate over long distances.

Internal combustion engines became easier to operate thanks to Charles Kettering’s invention of the electric starter in 1912, which eliminated the need for a hand crank to start a gasoline engine, and the noise emitted by ICE cars became more tolerable thanks to the use of the muffler, which Hiram Percy Maxim invented in 1897.

As highways outside of cities improved, the electric car range could no longer compete with the ICE. Finally, Henry Ford’s introduction of mass manufacturing of gasoline-powered vehicles in 1913 cut the cost of gasoline automobiles dramatically when compared to electric cars.

How An EV Drivetrain Works When was the last time you thought about how electric automobiles functioned? It has to do with magnetism and how electric and magnetic fields interact naturally.

When an electrical circuit is closed, enabling electrons to travel down a wire, the electrons create an electromagnetic field with a north and south pole. When this happens in the presence of another magnetic field, the opposing poles attract each other, whereas the like poles repel.

Electric motors function by attaching one pair of magnets or electromagnets to a shaft and another set to the housing that surrounds it. The motor uses these attracting and repelling forces to rotate the shaft, converting electricity into torque and eventually rotating the wheels, by regularly switching the polarity of one pair of electromagnets.

These magnetic/electromagnetic forces may also convert motion back into electricity, as in regenerative braking. The energy delivered to your home is alternating current (AC), which is named for the fact that the polarity of the power changes (alters) 60 times every second. That is, 110-volt AC is used in the United States and other nations; countries with a 220-volt standard often use 50-Hz AC.

Direct current (DC) is what flows into and out of each battery’s + and – poles. Motors, as previously stated, require alternating current to rotate. The electromagnetic force would simply lock their north and south poles together if it didn’t exist.

A motor is kept spinning by the cycle of constantly switching north and south. AC electricity is the most efficient technique to transport usable energy across long distances from a generating source (such as a dam or windmill).

This is because the AC signal’s alternating nature allows the voltage to be readily stepped up or down to different levels. This is why your home’s outlets are 120 volts AC (safe for human consumption), yet the voltage of a distribution transformer (those cylindrical grey boxes you see on power line poles) can be as high as 66 kVA (66,000 volts AC).

Because AC power allows us to build significantly more efficient generators, motors, and distribution systems from electricity than direct current, it is the most preferred energy current for powering vehicles. Electric automobiles are starting to catch up to, and perhaps beat, their gas counterparts as technology advances.

While there is still a long way to go for electric automobiles, the advances that businesses like Tesla and Toyota have achieved to this point have given optimism that transportation will no longer be dependent on fossil fuels in the future.

At this time, we’re all aware of Tesla’s accomplishments in the field, with the Tesla Model S Sedan capable of traveling up to 288 miles, hitting 155 mph, and producing 687 lb-ft torque. Tesla’s Uniqueness Tesla’s latest Model S Long Range Plus has a range of 402 miles according to the EPA. That’s an improvement of 87 miles since the vehicle’s 100.0-kWh version was released in 2016.

Tesla does this in part by manufacturing its own motor, inverter, battery pack, and other components rather than relying on a Tier 1 source. Tesla can constantly alter those parts to enhance their efficiency thanks to this do-it-yourself technique.

The battery is at the heart of the system. Unlike other automakers like Audi, Toyota, and Mercedes, Tesla allows drivers to use the whole battery pack capacity. In the case of the Model S, this implies that the entire 100.0 kWh is available to the owner, rather than keeping some capacity in reserve for battery life.

According to a Tesla engineer, the business has always included the whole battery in all of its vehicles. Batteries have a limited lifespan, and other automakers have agreed that if part of the cells fail, backups will be ready to replace them.

The Audi e-tron, for example, features a 95.3-kWh battery pack. However, that is a gross figure; the pack’s useful capacity is 86.5 kWh. According to Tesla, there are also minor differences in pack capacity. The capacity of a Model S battery, according to the firm, is between 100.0 and 105.0 kWh.

When you drive the Model S Long Range Plus, the car informs you if you use 96.2 kWh and was at zero usable miles, while the 102.5-kWh pack itself still had roughly 6.3 kWh of energy left. According to Tesla, the system is designed to function similarly to a petrol tank with a reserve.

The disadvantage of providing drivers with the complete package from the start is that battery deterioration is more noticeable. When cells quit operating, there is no buffer. Tesla provides an eight-year, 100,000-to-150,000-mile battery warranty, ensuring that the packs retain at least 70% of their capacity. Range is increased by reducing waste in the powertrain.

The more efficient a motor is, the longer an electric vehicle can stay on the road. Tesla informed Car & Driver that the Model S’s motor has improved from 80% to 90% efficiency, with a peak efficiency of 94 percent during EPA testing cycles.

According to Tesla, increasing motor efficiency by 8 to 10% will increase the range by 15 to 18 percent. Tesla also claims that their inverter is efficient to the tune of 96 to 97 percent. The inverter is about 99 percent efficient at its peak.

Of course, when using a Level 1 or 2 chargers, there’s still the issue of converting AC current to DC. Tesla didn’t go into detail about that efficiency, which is also depending on your local electrical infrastructure, but it’s significantly lower. The cars are connected to the network in both directions.

Tesla has been able to utilize anonymized data from vehicles to make software improvements. It can track the movement of a huge number of cars and utilize that data to make improvements to future software and hardware versions. Because of all of the tweaking and experimenting, attempting to squeeze every last ounce of energy out of components, many of the vehicle’s components must be developed in-house.

To put it another way, Tesla’s efficiency needs Tesla construction which includes keeping such vehicles on the road. Traditional automakers have been hesitant to enter the charging market for years. Tesla took the opposite approach, constructing its own Supercharging network.

The team that created the vehicle’s charger was also responsible for the creation of the first Supercharger station. While the initial Supercharger gave a Model S about 70 miles of range in 15 minutes, the current Model S gets 160 miles in the same time.

Tesla informed Car & Driver that the new Model S would offer even faster charging, which is unsurprising. The current Supercharger V3 offers a peak rate of 250 kW and is compatible with the Model S, Model X, and select Model 3 variations. So either a V4 Supercharger or a V3 upgrade will provide faster charging.

Expect a supported charge rate of more than 250 kW from the Model S and, ultimately, other Tesla vehicles. All of this points to a carmaker that appears to be lagging behind traditional automakers in the quest for greater range. However, the challenge of reducing costs remains.

Thanks for reading till the end. Comment what’s your opinion about this information “Elon Musk Revealed Tesla’s New Insane Engine“.