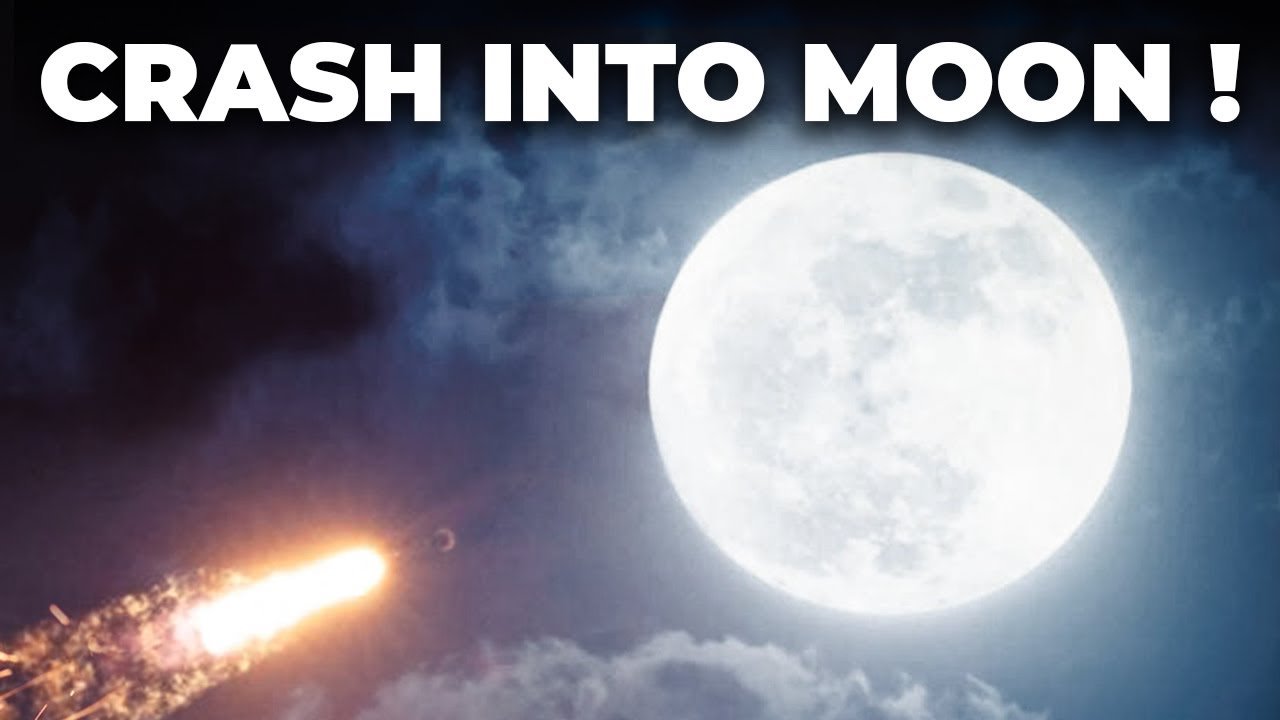 Elon Musk & SpaceX On Its Way To CRASH With The Moon: Space is full of debris floating around aimlessly. Broken pieces of rockets and satellites that are out of control. They sometimes hit other satellites or at the very least, narrowly miss hitting them.

And in the case of the SpaceX rocket; it is on course to hit the moon. Now, the question is, what happens when this debris ends up hitting a planet or the moon?

The Kessler Syndrome occurs when the amount of trash in orbit around Earth reaches a point where it just spawns more and more space debris, producing major challenges for satellites, astronauts, and mission planners.

The Kessler Syndrome is named after Donald Kessler, a former NASA scientist who first proposed the concept in a crucial 1978 study. Kessler and co-author Burton Cour-Palais noticed in their paper, “Collision Frequency of Artificial Satellites: The Creation of a Debris Belt,” that the chance of satellite collisions grows as more spacecraft are lofted into orbit. And each of these collisions would have a massive effect on the orbital environment.

“Satellite collisions would produce orbiting fragments, each of which would increase the probability of further collisions, leading to the growth of a belt of debris around the Earth,” the duo wrote.

“The debris flux in such an Earth-orbiting belt could exceed the natural meteoroid flux, affecting future spacecraft designs.” Unless humankind adjusted how it lofted payloads to orbit, the original research predicted that satellite collisions would become a source of space debris by the year 2000, if not sooner.

However, a timeline isn’t required for the core concept to work. “It was never intended to mean that the cascading would occur over a period of time as short as days or months. Nor was it a prediction that the current environment was above some critical threshold,” Kessler wrote in a 2009 paper that clarified the definition of the Kessler Syndrome and discussed its implications.

According to the European Space Agency (ESA), humanity has launched approximately 12,170 satellites since the commencement of the space age in 1957, with 7,630 remaining in orbit today — but only roughly 4,700 of them are still operational. That implies approximately 3,000 defunct spacecraft, as well as other large, deadly bits of debris like upper-stage rocket bodies, are speeding about Earth at incredible speeds.

For example, the orbital velocity of the ISS at 250 miles (400 kilometers) altitude is around 17,100 mph (27,500 kph). Even a small sliver of debris can cause catastrophic damage to a spacecraft at such speeds, and there are a lot of these fragmented bullets racing around our planet.

These items are more than simply a speculative danger. According to NASA officials, the ISS performed 29 debris-avoiding movements from 1999 through May 2021, including three in 2020 alone. And the number continues to rise; the station, for example, made another such shift in November 2021.

Many of the smaller pieces of space junk were created by the explosion of spent rocket bodies in orbit, but others were placed more intentionally. For example, in January 2007, China deliberately destroyed one of its defunct weather satellites in a widely panned anti-satellite test that resulted in more than 3,000 monitored debris items and maybe 32,000 others too small to be identified.

According to scientists, the vast majority of the debris is still in orbit today. On the other hand, spacecraft have collided in orbit. In February 2009, Russia’s defunct Kosmos 2251 satellite collided with the operating communications ship Iridium 33, resulting in approximately 2,000 pieces of debris the size of a softball.

The issue isn’t limited to the dangers that space travel poses. A portion of the space trash in low Earth orbit will gradually lose height and burn up in Earth’s atmosphere; nevertheless, heavier debris may occasionally collide with Earth, causing environmental damage.

The Altai region in eastern Siberia, for example, is littered with debris from Russian Proton rockets launched from Kazakhstan’s Baikonur cosmodrome. This includes trash from ancient fuel tanks that contain highly dangerous fuel waste, such as unsymmetrical dimethylhydrazine (UDMH), a carcinogen that is toxic to both plants and animals.

While efforts are made to keep the fallout from launches contained inside a defined area, total containment is extremely difficult to achieve. Anatoly Kuzin, deputy director of the Khrunichev State Research and Production Space Centre, which produces Proton rockets, claims that rigorous research has revealed no link between reported diseases in impacted areas and rocket launches.

Locals’ testimonies, on the other hand, indicate a high number of cancer cases in the area, which many believe is linked to the UDMH in the fuel tank debris; in 2007, 27 persons were hospitalized in the Ust-Kansky District of Altai with cancer-related issues, with many blaming the rocket fuel.

The problem was first addressed in the 1990s by NASA’s orbital debris mitigation program and guidelines. The 2006 and 2010 US National Space Policies also emphasize the importance of implementing the US Government Orbital Debris Mitigation Standard Practices, which prioritize debris-release control, the selection of a safe flight profile and operational configuration, and the secure disposal of space apparatus after a mission.

The Inter-Agency Space Debris Coordination Committee established the first internationally recognized standard consensus on orbital debris reduction principles in 2002. However, according to Holger Krag, the chief of the ESA’s space debris division in Germany, just half of all space emissions follow these standards.

Of course, any Earth-based reduction policy isn’t going to cover the moon and that’s where SpaceX junk is going. SpaceX Junk Hitting The Moon Experts claim a SpaceX rocket is on a collision path with the moon after whizzing through space for nearly seven years.

The booster was launched from Florida in February 2015 as part of an interplanetary mission to send a million-mile journey for a space weather satellite. The rocket’s second stage, however, became derelict after completing a long burn of its engines and sending the NOAA’s Deep Space Climate Observatory on its path to the Lagrange point — a gravity-neutral position four times farther than the moon and in direct line with the sun.

At this stage it was high enough that it did not have enough fuel to return to Earth’s atmosphere but also “lacked the energy to escape the gravity of the Earth-Moon system”, meteorologist Eric Berger explained in a recent post on Ars Technica.

“It’s almost like a billiard ball bouncing off of other billiard balls,” Bill Gray, an independent astronomer who first discovered that the Falcon 9 piece would hit the moon, told NPR.

In other words, this piece of space trash may have gone in a variety of directions, similar to the various scenarios where balls might roll when a pool player breaks. It may have gone into an orbit that would have collided with the Earth, or it could have been scooped up into an orbit around the sun, according to Gray.

Gray received additional data in mid-January that showed the rocket piece was going to crash into the moon, making it the first time humans have mistakenly smashed something into the lunar surface that we are aware of. The rocket component that will collide with the moon is not insignificant.

It measures around 12 meters in length, or about the same length as a school bus, and weighs four tons. It’s also flying through space at around 5,600 miles per hour, according to Jonathan McDowell of the Harvard and Smithsonian Center for Astrophysics.

The piece with the rocket is “It’s going to be completely obliterated. A massive plume of moon dust will rise where it collided, then settle across a large area of the moon “he stated The dust will settle in approximately a day, leaving a “sparkly fresh new lunar crater,” according to McDowell.

NASA has conducted missions to deliberately crash things into the moon in the past. They launched the LCROSS spacecraft in 2009 to see if water particles will be ejected during the impact. Although Billy Gray believes there will be no dramatic alteration to the moon as a result of the expected impact in March, he feels there will be something to learn from it.

“It could be a reasonably interesting scientific discovery that we’ll be able to learn a bit about the nature of lunar impacts, how large a crater you get for a given size object and a given speed. We may also learn a certain amount about the geology of this particular part of the moon,” Gray said.

The amount of old space trash in low-Earth orbit is especially alarming. According to John Crassidis, director of the University at Buffalo’s Center for Space Cyber Strategy and Cyber Security, it’s likely that within 50 years, there will be so much junk that we won’t be able to launch any more satellites. That has to be prevented.

Thanks for reading till the end. Comment what’s your opinion about this information “Elon Musk & SpaceX On Its Way To CRASH With The Moon“.