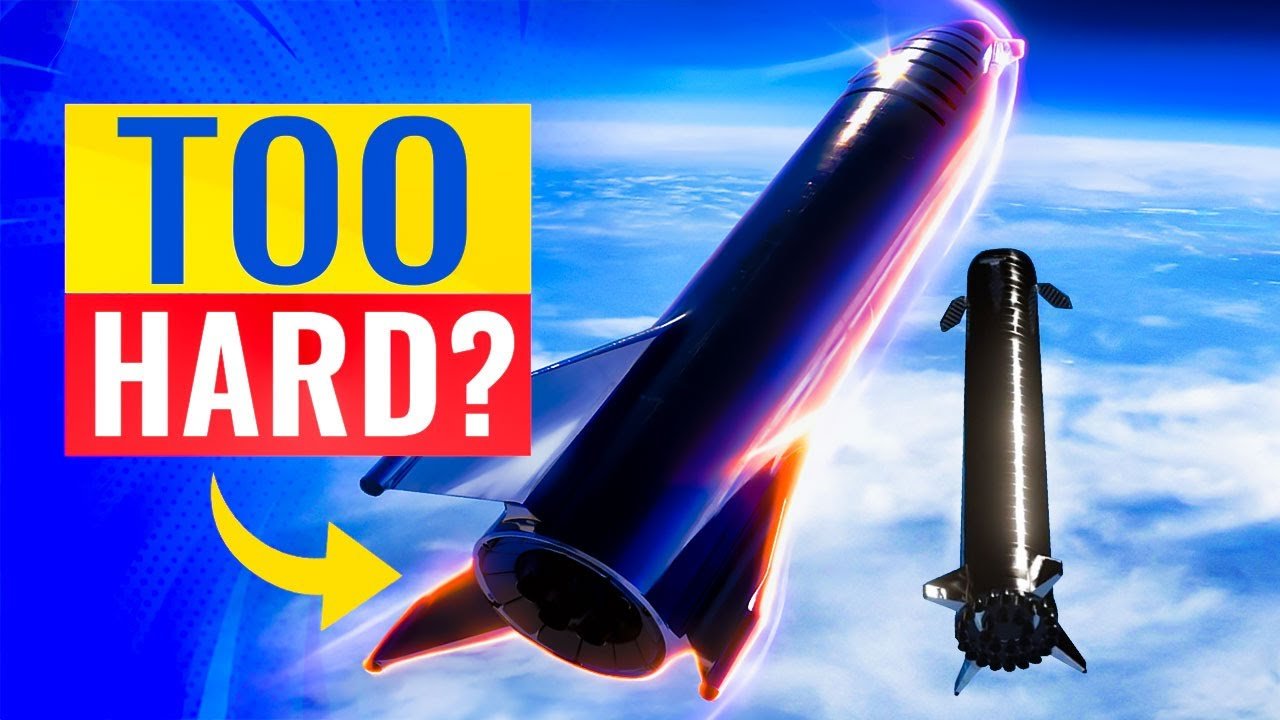 What challenges will SpaceX face with Orbital Flight Tests?: SpaceX plans to launch a prototype model of the Starship on its first orbital flight in the coming months, paving the way for spaceflights to the Moon, Mars, and beyond.

On May 13, following the successful landing of SN15, the company applied for a communications license with the Federal Communications Commission (FCC) to support an “experimental orbital demo” and “recovery test” of the Starship.

According to the document submitted to the FCC, a Starship craft fitted with a Super Heavy booster will lift from the company’s Boca Chica, Texas, launch facility. But why not just Starship, you may ask?

As per the plan, the booster stage will separate at around three minutes into the flight and splashdown in the Gulf of Mexico about 20 miles from shore. The Starship rocket will then pass over the Straits of Florida before entering orbit, returning to Earth, and attempting a soft ocean landing around 62 miles off the northwest coast of Kauai.

According to Musk, this location is a deliberate choice. Musk says, “We need to make sure ship won’t break up on reentry, hence deorbit over Pacific.” Indeed, this is the part of the test that will concern the company the most: ensuring that the massive upper stage does not disintegrate during atmospheric reentry.

If everything goes as planned, the full flight from start to end should take roughly 90 minutes. The goal of the flight is to “collect as much data as possible” and “better understand what the vehicle experiences in a flight regime that is extremely difficult to accurately predict or replicate computationally”.

The data obtained during the flight will assist SpaceX in making possible system refinements and enabling better models in the following simulations. But the question is, is it really that simple as it sounds? Obviously, no.

It is hard to launch rockets into orbit, but returning them to Earth is even more challenging. That’s because, during lift-off, the rocket is under acceleration, rising from the surface where the atmosphere is thick and is propelled by the combustion of fuel.

Now, ninety percent of the Earth’s atmosphere by mass is merely ten miles from the surface. So the rocket is well past that point by the time it reaches hypersonic velocities.

On the other hand, Descent is a different situation in which the atmosphere acts as a brake. The friction between air molecules in the atmosphere produces a tremendous amount of heat, which may reach temperatures of up to 4000 degrees Fahrenheit on exposed surfaces during re-entry.

This is why the exterior materials of spacecraft must be able to resist temperatures of thousands of degrees. So you see, for a safe landing, you must plan to enter the atmosphere at the exact angle and speed.

If the rocket hits too sharply or too rapidly, you risk generating a significant “splash”, which would entail a fiery end. And, if the impact is too shallow, you may skip right through the atmosphere and return into the cold of space.

This subtle dance between fire and ice is the science of atmospheric re-entry. However, in the case of Starship, SpaceX has clearly cracked the code. Starship’s exterior materials have outperformed other aerospace companies in terms of both performance as well as value.

Starship, unlike traditional rockets, is made of stainless steel. This is because the main idea behind Starship is to be an interplanetary vehicle, which means it will be exposed to both freezing and scorching temperatures as it ascends and descends into planetary atmospheres.

And it turns out stainless steel shines in this situation, as it has a high tolerance for temperature variations that many other materials simply can’t compete with.

When Starship will enter Mars’ incredibly thin atmosphere, it will do so in such a way that the amount of drag is increased, slowing the vehicle down as it falls. Drag generates heat, and in this case, more heat than even stainless steel can handle. So, what is SpaceX’s plan for such a scenario?

Well, SpaceX plans to use a liquid methane pump underneath the Starship’s surface to cool the ship’s descent, which will basically fight back against the heat in the same way that people sweat in hot weather.

As of now, some believe that SpaceX is planning an orbital test flight of the Super Heavy BN3 with the Starship SN20. As per Musk’s tweet in late March, “Next major technology [revision] is at SN20. Those ships will be orbit-capable with a heat shield & stage separation system. Ascent success probability is high.”

However, Musk noted in the same tweet that such a flight won’t be easy. Musk says, future Starship prototypes “will probably need many flight attempts to survive” reentry and “land intact”.

Many space enthusiasts also believe that SpaceX is most likely to fly its SN15 prototype for the second time or its next prototype in line, SN16, as a pathfinder. Apparently, they were correct! On May 28, Musk posted a picture of his latest Starship prototype, the SN16, which is being prepared for the project’s biggest test yet: the Mars-bound ship’s first orbital flight.

The 50-meter-long stainless-steel spaceship is shown in a hangar at Musk’s Starbase facility in Boca Chica, Texas, with its sci-fi nose cone and fins projected against the night sky. Alongside the SN16 was a booster, which will help propel the ship into space.

This two-stage rocket, when combined, will reach a height of 120 meters, making it the world’s most powerful launch vehicle ever developed. The Starship has six Raptor engines that are fed liquid methane and liquid oxygen via propellant tanks, producing methalox in a multi-stage combustion process, with the engine design minimizing waste.

Musk hopes that using methane as fuel will create a Sabatier reaction with subsurface water and atmospheric carbon dioxide if it ever reaches Mars. This will allow the Starship to power its journey back to Earth self-sufficiently.

As of May, eight prototype Starship vehicles, including Starhopper, have been launched from the company’s South Texas launch site at Boca Chica. However, no Super Heavy booster has ever been launched.

Super Heavy BN1 was piled to its maximum height earlier this year, but late design modifications rendered the prototype completely useless, turning it into more of a production pathfinder and source of practice than anything else.

As a result, BN1 was never taken out of the high bay where it was built, before being scrapped by SpaceX workers. According to Musk, “BN1 is a manufacturing pathfinder, so will be scrapped.

We learned a lot, but have already changed the design to BN2. The goal is to get BN2 with engines on the orbital pad before the end of April. It might even be orbit-capable if we are lucky.”

As seen in Musk’s pictures, the Super Heavy B2 is currently in production. And who knows, maybe we’ll get to see it fly sooner than we expected. Unlike Starship, Super Heavy will be loaded with 3,400 tonnes of cryogenic methalox and propelled by 28 Raptor engines, giving it a maximum force of 72 Meganewtons and making it more powerful than the massive Saturn V launcher used for the Apollo Moon landings in the 1960s and 1970s.

Normally, cold gas thrusters are used to control a rocket. They function similar to water bottle rockets, in which pressurized gas or water is ejected from the rocket. Hot gas thrusters, on the other hand, rely on the combustion of two propellants, which is more efficient.

Those engines transfer two distinct types of propellants into a chamber, ignite them, and have an opening where the exhaust of those two chemicals can exit. As per Tim Dodd aka Everyday Astronaut, “Hot gas, in this case, means the fuel and prop are stored in gaseous form. They’re stored at high pressures in COPV’s, either from engine tap-offs or heat exchangers. Then they reach the thruster chambers as a gas where they combust so they’re efficient.”

While the Super Heavy may still be subject to significant modifications in the coming weeks, the Federal Communications Commission (FCC) filing is proof that the test flight is well underway.

An orbital flight has been a big goal for Musk for years, but now it might actually be within his reach. SpaceX’s application to the Federal Communication Commission specifies a start date of June 20, 2021, and an expiration date of December 20, 2021.

That gives SpaceX a six-month window to make the flight happen. However, the window opens in about a month, meaning it could be mere weeks before SpaceX could hold the orbital flight.

What are your thoughts on the timeline? Do you think SpaceX will be able to launch the two-stage Starship into orbit successfully? And will the spacecraft survive reentry into Earth’s atmosphere? Comment.

Thanks for reading till the end. Comment what’s your opinion about this information “What challenges will SpaceX face with Orbital Flight Tests?”.

1 thought on “What challenges will SpaceX face with Orbital Flight Test?”