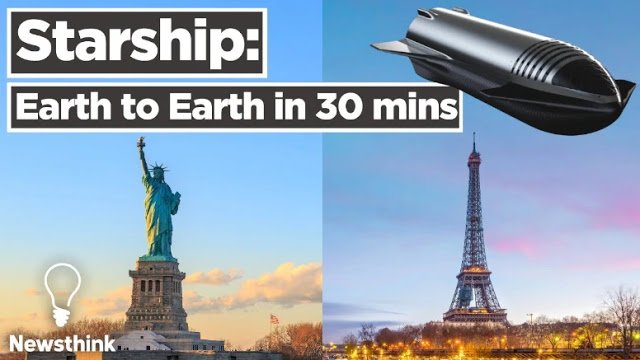 SpaceX’s Starship: From Earth to Earth in 30 Minutes: You wake up at 9 a.m. in New York and you find out there’s a major networking event in London in five hours. Imagine if you could get on a plane in the afternoon and make it on time.

It would be impossible with an airplane right now but not with a rocket. Elon Musk’s biggest ambition is to use starships to build a city on Mars. And while working on that plan, he thought of another use for the spacecraft.

Maybe there is a market for faster transportation of goods around the world. That was musk in 2016 and the market has now expanded to move not only cargo but also the crew. “If you build a ship that is capable of going to Mars, what if you take the same ship from place to place on Earth?” Elon Musk said.

SpaceX wants to take people from one place to another on the planet, making the longest distance trips in less than 30 minutes and anywhere around the world in less than an hour.

While passenger planes travel at a speed of 575 mph, Starship will top out at about 17,000 mph. And instead of flying above the clouds, it will fly above the earth. The great thing about going to space is that there’s no friction, so once you’re out of the atmosphere, it’ll be silky, no turbulence, nothing.

But that doesn’t mean your ride will be very comfortable. It’ll feel like Disney’s Space Mountain roller coaster which means you’ll need some sort of restraint mechanism.

And if you feel a little restless, there will be no toilets or other amenities like kitchen galleys for the Starship to carry that many people.

If it were traveling to Mars, there would have to be cabins and common areas as it would take months to get there and that would limit the number of passengers to 100, while the Earth-to-Earth journey allows Starship to hold 1000 passengers.

To board the spacecraft, you will need to take a boat to the site of the rocket launch which is on a floating platform called a spaceport. After crossing the Earth, it re-enters the atmosphere and reaches the floating spaceport in another city.

Since the Starship is fully reusable, the ticket price will drop significantly but that doesn’t mean it will be cheap. We don’t yet know how much a trip will cost, but a CNBC reporter quoted SpaceX president and COO Gwynne Shotwell as saying at an event in 2019 that it would be cheaper than a first-class ticket but a bit more economy. Will happen.

Shotwell has said before that it will be less than a business class fare. So it’s still unclear what the price will be, but here’s an example of round-trip plane tickets from London’s Heathrow Airport to New York’s JFK about a month from now.

An average economy ticket is about $400, for business class, it is $4,000 and for first-class is about $5,000. Besides price, there’s another big consideration that SpaceX will need to address.

Rockets are really noisy. The sound of a Raptor engine powering a starship is too noisy. Currently, 31 of these are employed for the Super Heavy Booster that carries the Starship into orbit while the other six are located on the Starship itself.

However, Musk has stated that the Starship could actually travel under 6,200 miles without the need for a booster and, instead, the spacecraft would fly with an additional two to four engines, but because it would still have an impact on the occupants, the spaceport. It will be located 20 miles offshore which means it may take longer than the actual flight to get there.

For comparison, the journey from New York’s Grand Central Terminal to JFK Airport is approximately 14 miles. Musk has suggested that a Hyperloop transit system could get people into space faster, traveling at hundreds of miles per hour.

And while SpaceX is working on all of its plans, the airline industry is also trying to cut travel times. Supersonic aircraft traveling faster than the speed of sound can return.

Concorde stopped flying in 2003 after rising maintenance costs. A company called Boom Supersonic is now developing the Overture that will cut flight times by aircraft in half.

So the journey from New York to London would be 3 hours 15 minutes. This will be the price of a business class ticket and it aims to introduce commercial flights by 2030.

It’s unclear whether SpaceX’s Earth-to-Earth plans will extend to a flight before that, but Musk says test flights could begin as early as 2022 or 2023 and, eventually, will be real.

When it does, it can change how we live and even where we live. Although we may have to wait a bit, the future of air travel may lie in space. So if you could afford a trip on a Starship, would you use it to travel to another city? Can you stomach the ride? I would love to hear what you have to say, you can leave a comment in the section below.

Thanks for reading till the end. Comment what’s your opinion about this information “SpaceX’s Starship: From Earth to Earth in 30 Minutes“.

8 thoughts on “SpaceX’s Starship: From Earth to Earth in 30 Minutes”