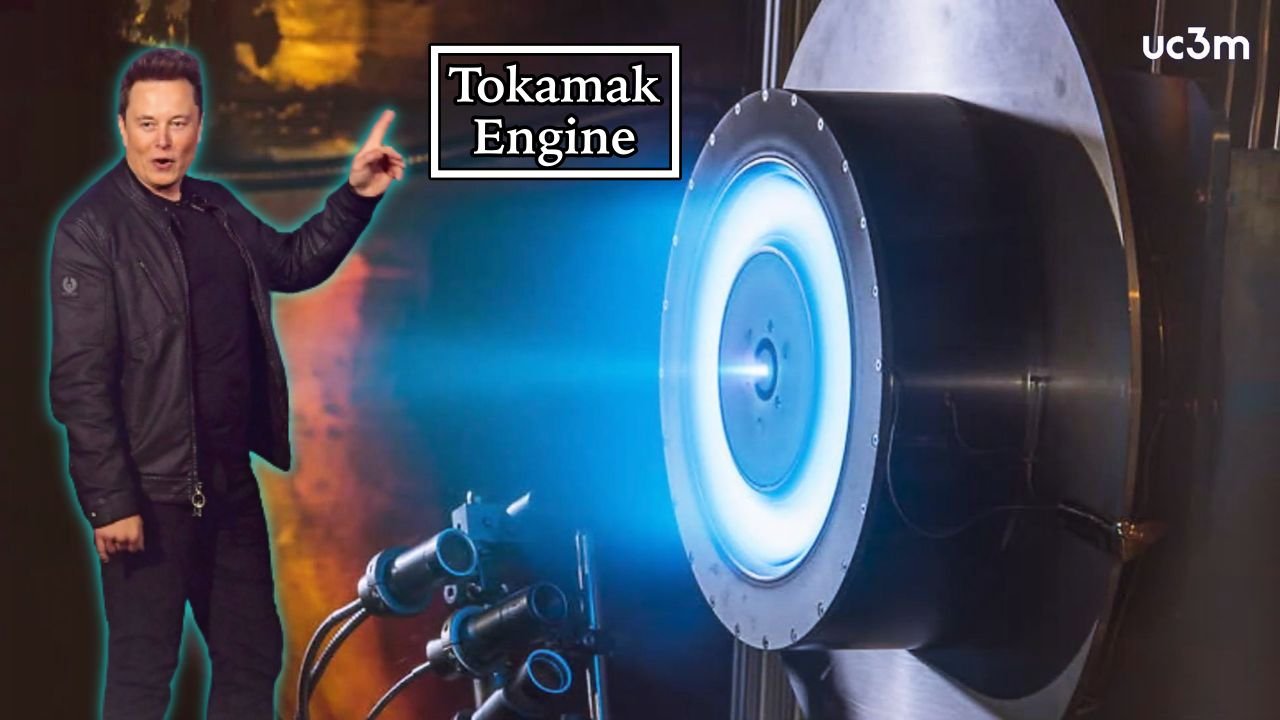 Elon Musk will reach Mars with this amazing rocket engine – Tokamak Reactor: To figure out how to populate Mars, you have Einstein’s brain, the wisdom of Louis C.K., and the courage of Captain Jack Sparrow. The main obstacle still remains the inefficiency of rocket engines.

Chemical propulsion systems are capable of developing high thrust but they have a small specific impulse. In other words, they cannot maintain traction for long due to rapid fuel consumption. Getting into orbit is one thing, making interplanetary flight is quite another. There is nowhere to refuel in outer space.

A few words about the unusual approach of Musk’s company, this is really interesting, usually, computer simulations are done before launch and only after the prototype has been tested. NASA doesn’t like explosions.

Musk has a different approach, SpaceX produces prototypes of varying levels of readiness with MK and SN indexes to test specific technologies. For example, the Starship SN2 was built to test the structure to which the engines are attached and the SN5 was launched with a Raptor SN27 engine but without the fairing.

This explains the incomplete appearance of the rocket but the SN10 had three engines. As NASA tried to hide from the public eye, Musk turned them into a show. We are talking about the Interplanetary Transport System.

In-orbit refueling is a key element of this system. The algorithm resembles a computer strategy game. The first rocket launches a ship with people into orbit, the next has tankers with fuel, after refueling in orbit the starship will be able to go on an interplanetary flight.

Science fiction is getting closer to reality but if a new type of propulsion system appears. Then Musk’s idea loses all meaning, while physicists were thinking about building a propulsion system. NASA developed a strategy for the evolution of the Red Planet. A person plans to live on Mars from day one until the opportunity for visitors to come there has developed into sufficient detail. In general, the colonization strategy looks like this:

The first ship delivers a 3D printer to Mars. In the next step, the 3D printer builds the individual elements and components of the stable engineering structure of the future. The building materials are soil, water, rocks, and atmospheric gases.

One of the Persistence rover’s tasks is to collect samples of everything on Mars. After that, the printed parts are assembled in the correct order and it is seen that we have a full-blown Martian base.

Able to receive people and goods from Earth, that’s what we meant. When we talked about delivering a small 3D printer that would print to a large 3D printer and so on. But seriously 3D printers have already been successfully tested on Earth and on Earth.

Experiments have shown that these devices are capable of printing almost everything necessary for the colonists’ life on Mars. This would be more efficient and cheaper than delivering everything needed for the Space Shuttle.

The only difficulties are energy sources of suitable potential. And as you can guess these are the main components for base life support. By the way, a 3D printer also requires energy.

It turns out that our civilization has no alternative to nuclear power units. The three most common concepts of nuclear rocket engines were known until recently solid phase, gas phase, and liquid phase.

Each type of nuclear fuel as its substitute corresponds to an overall state of solid, melt, and high-temperature gas or plasma. A solid-stage nuclear rocket engine is essentially a nuclear reactor or a chamber where a nuclear reaction takes place.

The fuel elements are rods or hollow tubes, with uranium dioxide pellets sealed inside each rod being the fuel. Most stationary nuclear reactors work this way. The nuclear reaction of uranium dioxide heats the rod which in turn heats the medium or the working medium of the reactor as nuclear physicists call it.

Compactness is important for nuclear rocket engines, so turning hydrogen into a gas is acceptable. The working medium breaks through in the nozzle and thrust appears. The specific impulse of a solid-stage nuclear rocket engine is three times greater than that of chemical rocket power plants and is about 800 to 900 meters per second.

For example, SpaceX’s Raptor engine used for Starship has a specific impulse of 380 in vacuum and 330 on the ground. For liquid phase jet engines where the nuclear fuel is in the liquid state. The impulse is 14000 meters per second.

The spacecraft is still powered by chemical propulsion systems. For example, Elon Musk’s SpaceX Starship uses a mixture of liquefied methane and oxygen as an oxidizer. This is not surprising because the coolant or working medium exits the nozzle of a nuclear power plant.

The danger of exhaust is obvious, radioactive gases are released. Now if we could only find a way and cycle so that a thermonuclear reaction would be safe for both the environment and the astronauts, that would be a real revolution.

Fatima Ibrahimi a physicist at the Princeton Plasma Physics Laboratory PPL of Do. recently unveiled a new concept for a propulsion system that could quickly deliver a spacecraft to Mars. The journey will take only three months which is incredible.

In fact, there is a reactor at Princeton, the work of which prompted Fatima Ibrahimi to think of a nuclear rocket engine, the effectiveness of which makes us talk about a mission to Mars as a real phenomenon.

We are talking about the Tokamak Reactor. A toroidal vacuum chamber with magnetic coils that contains and controls the high-temperature plasma inside the reactor using a magnetic field. By the same principle, the plasma on the Sun is constrained by powerful magnetic fields.

The tokamak reactor looks like a donut, it is almost hollow inside. You’ll be sad if you bought it at Dunkin’ Donuts as the plasma fills. In a cycle inside the reactor, the particles are accelerated to a speed of 20,000 meters per second and the plasma forms a closed cord.

If you open the torus and release the energy you get a tremendous thrust and most importantly effective braking. Because accelerating to crazy speed is only half the battle. It is also important to break at the right time.

According to Fatima Ibrahimi, a spacecraft with such an engine will reach Mars in about three months. This is no big deal compared to past performance with chemical rocket engines. But how can it be applied to rockets?

The peculiarity of the tokamak is related to the fact that the larger the donut, the more stable it is. The idea of ​​tokamak was first formulated by the Soviet physicist Oleg Lavrentiev in the mid-50s of the last century.

At that time this technology was actively developed by the United States, Soviets, China, Japan, and South Korea. The plasma either slows down or accelerates in the system, depending on the strength of the magnetic field.

The density of the plasma depends on the strength of the magnetic field. Similar phenomena can be observed in the Sun. Theoretically, plasma and tokamak can be heated to 150 million degrees.

By comparison, the hottest part of the Sun has a temperature of about 15 million degrees at its core. The problem is its poor stability and the smaller the size of the tokamak, the more manifested the unstable behavior of the plasma.

As soon as the plasma touches the reactor wall, it immediately loses energy and destroys the reactor walls. The world record for possessing high-temperature plasma was set aboard the South Korean K-star Tokamak in 2016.

The scientists heated the plasma to 50 million degrees and held it in a magnetic field for more than 70 seconds. Then the plasma lost its shape and turned into steam when it touched the wall of the tokamak. And Reaction stopped.

As you can see the technology is still imperfect even in the terrestrial laboratory. How can this be implemented in a flying object? The nuclear rocket engine is relatively compact. How nuclear physicists would control the plasma in such a reactor is a big question.

If the engine fails, the fate of the astronauts will not be so deep. So far, Princeton scientists have figured out how to save the tokamak walls from destruction. It turned out that boron copes with this much better than other coatings.

However, the material is very toxic and the reactor has to be stopped and serviced after each rupture of the plasma. When this happens all the laboratory personnel are moved to another room.

There is also a more efficient and safer way to cover the chamber walls with boron that doesn’t even require stopping the tokamak. Boron powder is injected directly during the operation of the reactor.

Test leader Robert Lunsford of the US Department of Energy’s Princeton Plasma Physics Laboratory believes the technology is more effective and less dangerous. Let’s assume that Tokamak can be saved from destruction and restart in outer space if necessary.

How do we achieve plasma stability? There is a theory that plasma behaves more stable in a vacuum if the thermonuclear rocket engine is operating only in outer space so the wall can be removed from the structure, leaving only small protective pads on the magnetic coils.

This would facilitate the task of igniting the thermonuclear plasma. Perhaps Fatima Ibrahimi thought of this when she saw the tokamak in her laboratory. If so, we will soon see the engine depicted by futurists on UFOs.

So the spacecraft’s power plant must have different types of rocket engines. For example, a conventional chemical engine would launch a rocket into outer space. And a nuclear installation in outer space will begin.

There is also the problem of choosing a suitable working medium and a nuclear fuel. Here several criteria have to be met. The most important features are compactness and energy efficiency.

A spacecraft flying to Mars would need to carry a lot of useful equipment, and there would be little benefit from such a nuclear rocket engine if all payload capacity was spent on fuel supply. Perhaps that’s where Elon Musk’s dreamy interplanetary transport system will be helpful.

Thanks for reading till the end. Comment what’s your opinion about this information “Elon Musk will reach Mars with this amazing rocket engine – Tokamak Reactor“.