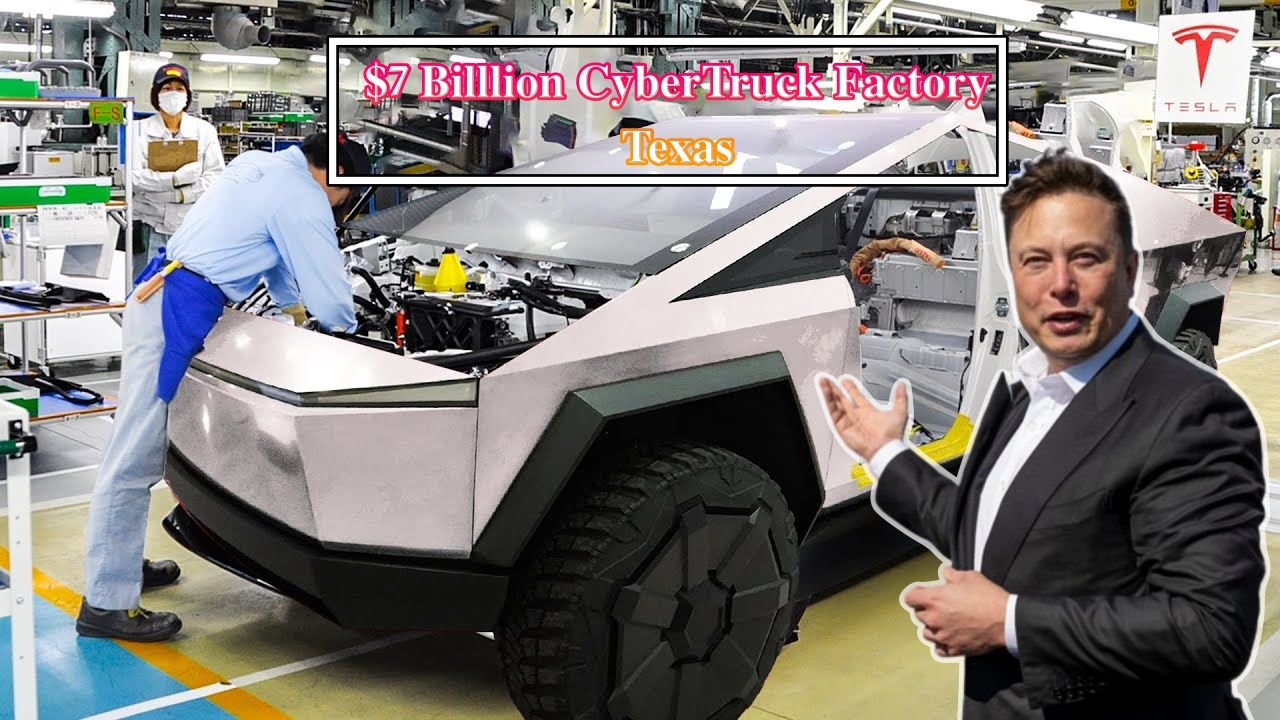 Take A Look Inside Tesla’s NEW $7 Billion Cybertruck Factory in Texas: One segment of electric vehicles that have not been properly catered to is the pickup truck! You can easily buy an electric SUV, sedan, compact, and even a school bus!

However, the market is scanty when it comes to pickup trucks! But that is for the meantime, as multiple automobile makers are working on their versions of battery-powered pickup trucks! Tesla’s Cybertruck stands out, thanks to its futuristic looks!

In this article, we take you inside the new 7 billion dollar factory where Tesla will manufacture the Cybertruck!

Like Elon Musk, the CEO of Tesla, said, bring out the pickup trucks from major auto companies and strip them all of their logos. Then try to pick out which company made which truck, and you run into a problem. They all look alike, as the manufacturers are unwilling to leave their comfort zones.

However, Tesla is not too scared to stay with tested and trusted formula! And this was how the Cybertruck was born, intended to be different right from inception!

The Cybertruck, looking like something out of Blade Runner, was revealed in 2019 by Musk. Two years later, the truck draws eyeballs toward the rest of Tesla’s lineup. With angular shapes and supposedly bulletproof windows, the Cybertruck certainly lives up to its name!

The truck is ugly but futuristic ugly! But the ugliness has not stopped the pre-orders from rolling in! According to unverified reports, more than one million orders have been placed even though Tesla is yet to make a single production version!

The Cybertruck is also huge! You need to see it in person to appreciate how large the Cybertruck is! However, Musk has hinted at making a smaller version to be sold in Europe. The body, made from that stainless steel alloy, also boasts 100 cubic feet of lockable storage in the bed and a 6.5 ft length.

Tesla says it will sport up to 3,500 pounds of payload capacity and have a maximum towing capacity of more than 14,000 pounds. The top-of-the-line tri-motor AWD variant will sport a 0-60 time of less than 2.9 seconds and handle the quarter-mile in 10.8 seconds.

With up to 16 inches of ground clearance and adjustable air suspension, plus an approach angle of 35 degrees and a departure of 28 degrees, Tesla is setting the Cybertruck up to be an off-road powerhouse, too.

Naturally, it houses both 110-volt and 240-volt power outlets to plug in all your toys. Musk said in a March 2021 tweet that Cybertruck owners will be able to plug a tiny house, or a towable camper, into the Cybertruck to power it. This is courtesy of the two- way charging feature the truck has.

You can use it to operate power tools, for example. According to Musk, the angular design comes from the fact the Cybertruck uses ultra- hard 30X steel. Where regular hot-rolled steel is rolled at a temperature of over 1,700 degrees Fahrenheit, this steel is further processed in cold reduction mills to make it even stronger.

Thanks to the new 4680 battery, the highest trim will offer at least 500 miles on a single charge. Since its reveal, Tesla has upgraded many parts or even added new parts altogether. For example, there is now a version with four electric motors, mostly likely meaning one for each wheel like the Rivian R1T.

This will increase the total output significantly. Moreover, Tesla has a new powerful, more efficient, and compact electric motor is known as the carbon-sleeved motor.

It is already powering the Model S, allowing the sedan to become the fastest production car! There is reason to believe the electric motor on the Cybertruck has been upgraded to the new carbon sleeved version. There are other changes that may appear minor but affect the truck’s daily operation.

For example, if you look at the prototype revealed, you won’t see a windscreen wiper. But what is a car without its windscreen wiper? Speculations were abounding that Tesla would be using an innovative wiper system for the vehicle’s production version.

Patents from Tesla suggested wild options, including a folding, single-blade wiper and a system that uses lasers to get water off the windshield. The first wiper Tesla added was huge, thanks to the large surface area of the glass. It was also far from the exotic designs that had been bandied around.

It was quite ungainly hanging on the driver’s side of the screen. Even Musk later admitted that the updated wiper setup actually “troubles” him the most about the vehicle. He further noted that a deployable wiper system that could stow in the frunk would be a great option, but such a system would be very complex.

Considering that the Cybertruck is a utility vehicle, the presence of overly-complicated systems might be detrimental. However, recent images of the Cybertruck show Tesla is exploring something extremely practical for the truck.

The setup, after all, makes it easy to replace the Cybertruck’s wipers when needed. Its placement on one side of the vehicle also suggests that owners would not need to jump on the tire and lean forward just to gain access to the pickup’s wiper. Musk has also reluctantly added side mirrors.

The technoking doesn’t like side mirrors as they interfere with the clean shape of the truck. Instead, he would use a pair of cameras, which would only increase the tally of cameras already on the truck. However, regulations require vehicles to sport side mirrors, but Tesla has added them.

However, Musk has the last laugh as he has made the mirrors easily removable. While carmakers must include side mirrors, apparently, car owners can decide what happens to them!

There is another change that may be coming soon to the Cybertruck. The company may consider adopting an 800-volt architecture for the Cybertruck and the Tesla Semi. Rivals like Porsche have adopted such a system for the Taycan.

Lucid Motors went even further by adopting a 900-volt architecture for its Air sedan. According to Drew Bagliano, SVP of Powertrain and Energy Engineering, for the smaller platform vehicles like the Model 3 and Model Y, there are some wins and losses with 800 volts.

Not everything is better. He also said they looked seriously at the reality of going to a higher voltage on the platforms, but there was nothing encouraging them to do so. But given that the Cybertruck is a bigger vehicle, an 800-volt architecture does present some legitimate advantages.

Baglino noted that the architecture makes sense for electric cars requiring higher charging power or more torque. Thus, Tesla is considering adopting an 800-volt architecture for upcoming vehicles like the Cybertruck and the Tesla Semi.

The Cybertruck has also gained a practical feature that most drivers will use every day. As shared by the Cybertruck Owner’s Club to online publication Teslarati, the Cybertruck demonstrated its rear-wheel steering features while it was moving around Giga, Texas.

A video of the vehicle, shot by the group’s member @sandeepdegala, was shared online, and while it was very brief, one could easily see the Cybetruck’s rear wheels moving.

The concept is that when you turn the front wheel through the steering wheel or yoke, the rear wheels turn too. Musk stated that the function would ensure the Cybertruck could accomplish tight turns and maneuver with high agility.

This was a pretty practical move for Tesla especially considering the Cybertruck’s size. With a wheelbase that exceeds the Ford F-150, rear-wheel steering that makes it more maneuverable would be appreciated by customers! So, where will Tesla make the Cybertruck?

The new electric truck will be made at the brand new Giga Texas. Musk recently declared the facility opened during a lavish event tagged Cyber Rodeo, obviously inspired by the Cybertruck.

Apart from the Cybertruck, the plant will produce the Model Y. The plant is massive, nearly a mile in length. If you turn it on its side, it is taller than the famous Burj Khalifa hotel. It will also produce the new 4680 battery used in the Cybertruck.

Tesla needs lots of force to manipulate the steel material used to make the Cybertruck’s body. To handle the stamping, Tesla Musk said Tesla would be purchasing a first-of-its- kind 8,000-ton casting press to manufacture the rear-body casting of the Cybertruck.

The new press has now been at Giga Texas. The Giga Press has lots of advantages, including simplifying the production process. It will cut the number of parts Tesla deals with significantly, saving time and money. It will also allow the vehicles to have structural batteries, resulting in more robust cars.

Giga Texas allows Tesla to bring everything under a single roof. There are sections for stamping, bodywork, casting, painting, general assembly, batteries, etc. Musk called it the most advanced car factory the Earth has ever seen. Let’s hear what you like most about the Cybertruck in the comment section below.

Thanks for reading till the end. Comment what’s your opinion about this information “Take A Look Inside Tesla’s NEW $7 Billion Cybertruck Factory in Texas“.