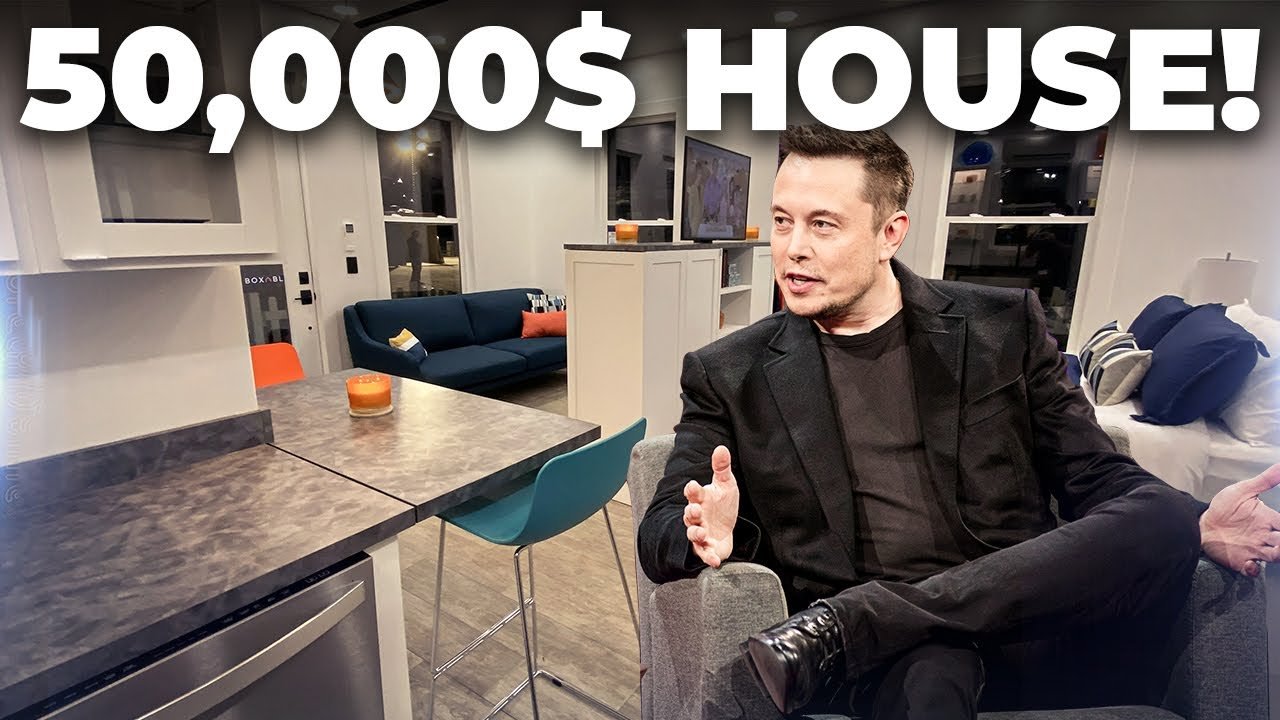 Take A Look Inside Elon Musk’s $50K Folding House: What’s inside Elon Musk’s $50k folding house? Well, the house of the world’s richest man that owns Tesla & SpaceX is not what you think it ought to be and you may just be as shocked as we are when you find out what’s in the tiny house in today’s article.

That’s correct, Musk looks to be living in a $50,000 prefabricated tiny home for the sole purpose of product testing. The home is built by an upstart company named Boxabl and they want to go further in refining their craft of building prefabricated affordable homes.

Musk is putting his house to the test in more ways than one. He could have shrunk and lived almost anyplace if he had wanted to. Despite this, he chose Boca Chica, an area of miles of flatlands 40 minutes from civilization. In many ways, this area gives you a sense of what living on Mars would be like.

When you look at Musk’s blueprints for Mars, you’ll see that the residences don’t exactly resemble Manhattan, nor do they like your typical white-picket-fence-clad suburban neighborhoods. Building a home on another planet would naturally differ from what we’re used to here on Earth.

Buildings would need to be created swiftly and easily, using as little energy as possible, to efficiently build a colony on Mars. To put it another way, colonization Mars would necessitate a highly streamlined and precise process.

One that resembles an assembly line but uses the most sophisticated manufacturing techniques. One factor in the success of this technique would be the use of small, lightweight, and easily transportable materials, similar to those used in a Boxabl house.

It all comes down to his dedication to his aim. “When Tesla and SpaceX go bankrupt, I will go bankrupt personally,” Musk has said. But the idea of Musk’s miniature home isn’t just that he’s all-in with a stake in the game; it’s that he’s prepared to live out his vision while doing so.

“I think possessions kind of weigh you down,” Musk said in an interview. Though that idea is at the heart of minimalism, coming from a man who is on a journey to settle a planet 246 million kilometers away from Earth, the seemingly universal phrase tells a lot.

Product testing is an example of Musk’s ingenuity in action, and it’s an important part of the strategy that drives his success. This move was also followed by the sale of all of his previous houses.

In May 2020, he revealed that he would sell “nearly all” of his goods to support the venture and that he “would not own a house.” The entrepreneur has since sold his real-estate portfolio, which was previously valued at more than $100 million.

This includes the sale of three adjacent mansions in Los Angeles’ Bel-Air area, as well as an estate once owned by actor Gene Wilder. “It’s going to take a lot of resources to build a city on Mars,” Musk told Mathias Döpfner, the CEO of Insider’s parent company, Axel Springer, in an interview last December.

“I want to be able to contribute as much as possible to the city on Mars. That means just a lot of capital.” Musk told Döpfner that he would have “basically almost no possessions with a monetary value,” apart from stock in his companies.

This supports many people’s speculation that Musk also wanted to silence critics who kept saying that he held expensive housing properties and was not the philanthropist many say he is.

Either way, what’s Musk living with right now? Boxabl’s initial model, the Casita, is very likely what Musk has right now. Though, in terms of the tiny house movement, it isn’t so small!

It’s similar in size to a converted double garage at 375 square feet, and it’s built as a studio apartment with a full-size bathroom and kitchen facilities. The Casita comes with a full-size shaker-style kitchen, a large fridge, dishwasher, oven, microwave, a tall window right over the sink, and a modern breakfast bar for two right out of the box.

The only things you’ll require are a bed and a couch. A full-sized bathroom with a shower, tub, backlit mirror, and plenty of storage is hidden behind a modern sliding glass barn door.

Under the enormous 8-foot windows and the even taller 9.6-foot ceiling, there’s heating and air conditioning, as well as controllable LED lights.

It has an open floor layout with a bedroom, bathroom, living, dining, and kitchen area, wide plank composite flooring, a built-in ironing center, washer and dryer, and all appliances are equipped with modern technology, including integrated USB ports in their power outlets.

The exterior is a steel skin, which is architecturally neutral and easy to modify after it arrives so that it feels like your own. The completely furnished Casita Boxabl house is for sale for $49,500 USD. All you’ll need is a foundation to park it on, and then you’ll need to connect it to local utilities.

The apartments were designed to be exceptionally energy-efficient, with a much smaller air conditioning system than a typical home. They use high R-value insulation, a tight building envelope, and minimal thermal bridging, resulting in a monthly electricity bill of roughly $28.

Boxabl’s are made of steel and concrete, they are virtually impenetrable to the elements. Steel, concrete, and EPS foam were chosen since they are non-degradable and endure a lifetime. The walls, floor, and roof are made of structurally laminated panels, making them far more durable than a standard site-built home.

They’ve been designed to endure the harshest wind conditions in North America (i.e. hurricane proof), and because the walls are entirely laminated in one piece, they won’t flex or split during transportation and, as a result, provide excellent sound insulation.

Because they don’t utilize timber or sheetrock, the construction materials won’t be destroyed by water and won’t grow mold, so the structure will be unaffected if there is a flood. They’re also capable of dealing with snow.

Casita was also built with fire resistance in mind (let’s face it, nothing in life is fully fireproof) — the interior and outside are both made of non-combustible materials, ensuring that your Boxabl won’t catch fire if you catch flying embers, for example.

The units have been created to exceed the standards of any building code because they ship anywhere in the world, and the modular approval they have within the US lowers local inspections because the blueprints have already been pre-approved.

Boxabl is manufactured and completed entirely in the factory. The house folds down from 20 feet to 8.5 feet wide and can be carried anywhere in the world by trucks, rail, sea, and air. What is the significance of 8.5 feet? This is the key number for drastically lowering delivery costs.

They designed it to fold up so little in order to avoid hefty shipping fees and other issues that come with sending anything larger. It unfolds in less than 2 hours once delivered, allowing you to leave an empty lot, go out for lunch, and return to a fully completed home!

It unfolds, plugs in, and voila! You have a new home! A fashionable and creative home that is both economical and quick to construct, with high-quality structures, vast rooms, and high ceilings; it is also fully equipped.

This is exactly the kind of thing that Elon Musk enjoys, and it’s easy to see why he chose Boxabl. Many industry analysts and environmentalist groups also expect the future of the real estate market along with its design practices to be completely modular just like Boxabl’s homes are.

Homeownership is the furthest thing from most young professionals’ minds, what with mounting student loan debt and skyrocketing real estate costs. What if you could buy a home for a third of the cost of a standard home, plus rental opportunities that could help you pay off your mortgage faster?

You’d buy your future home the same way you’d buy a hot tub or a cup of coffee: custom-made in-store and ready to be dropped off or picked up. The typical property price in several municipalities has risen to almost $2 million, owing to a pandemic-induced major suburban movement; by comparison, the median home price in the United States is $270,000.

These homes were selling for far more than the asking amount. Money is flowing and interest rates are low. This implies that low-cost credit is easily available, and mortgage rates are at their lowest in 50 years.

Some billionaires have boosted their wealth by up to 479 percent since the outbreak, and they are now buying up hard assets like real estate alongside their shareholders and everyone else who was able to work throughout the pandemic.

Thanks for reading till the end. Comment what’s your opinion about this information “Take A Look Inside Elon Musk’s $50K Folding House“.