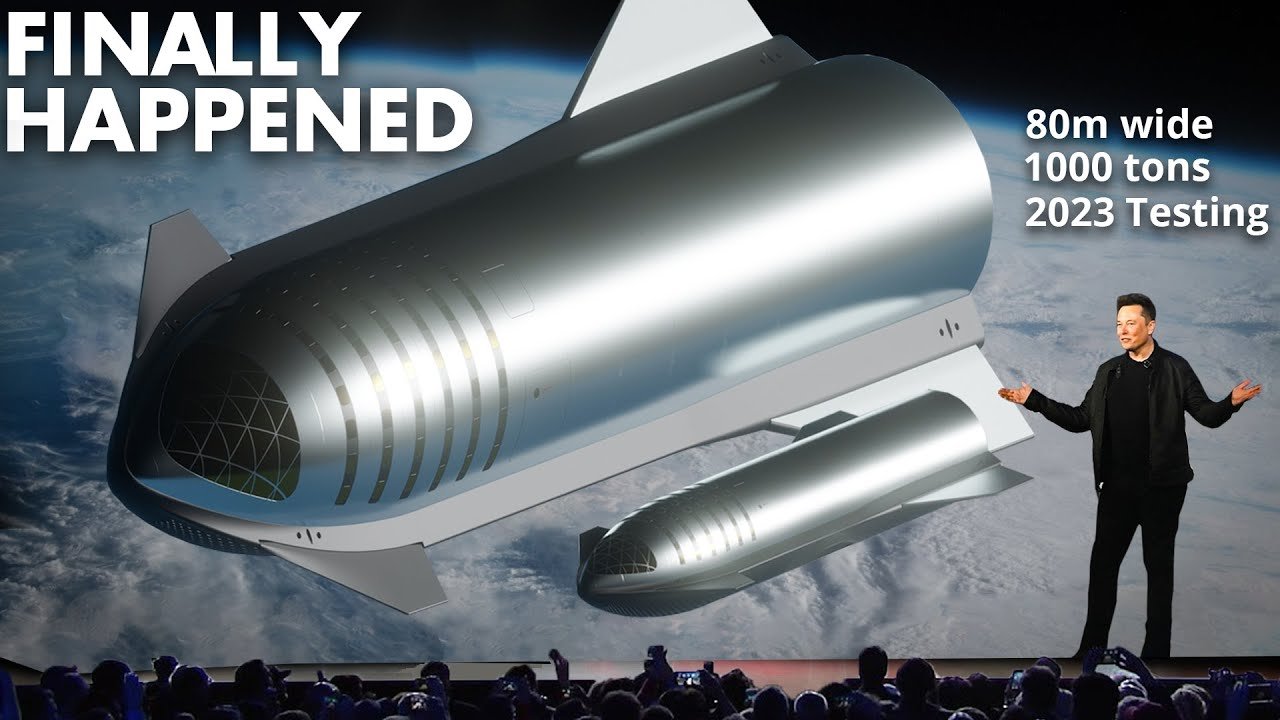 Elon Musk’s INSANE NEW Starship 2.0 SHOCKS The Entire Space Industry: What do you do while you build the most powerful spacecraft on Earth? You announce an even bigger and more powerful spacecraft! Most people won’t do that, but that is exactly what Elon Musk is doing!

SpaceX is an ambitious company! Under the control of Elon Musk, it has been moving from one huge milestone to another. The company currently operates the most powerful rocket, the Falcon Heavy, while still owning one of the most active rockets in operation, the Falcon 9.

SpaceX regularly sends payloads to orbit for private companies, including itself, and government entities like the US military. SpaceX is also a close launch partner for NASA, ferrying cargo and personnel to the International Space Station.

The working relationship is even set to go deeper, with SpaceX featuring heavily in NASA’s missions to the moon and beyond! Owning the most powerful rocket flying has not stopped Musk from dreaming even bigger. SpaceX is currently developing a rocket that will allow Musk to achieve his biggest dreams.

Musk has accomplished a lot already, but his most ambitious aim is to start a colony on Mars, putting people permanently on the planet! That is no mean feat as the plan calls for about one million people to be transported from the Earth to Mars!

But you can’t just take a million people and dump them on the harsh environment of Mars! You simply have to prepare the environment ahead of their arrival! This requires tons of tons of cargo to provide everything needed, including life support systems, food, tools, etc.!

Currently, no spacecraft can take humans from the Earth to Mars, not to talk of the many tons of cargo Musk has to move! But he has taken the bull by the horn by developing the spacecraft he needs, the Starship! While still in development, many people already see the potential of the massive rocket!

NASA wants to use it to land American astronauts on the moon. The Pentagon will use it to move military cargo worldwide in minutes. Astronomers, satellite companies, and aspiring space tourists are eyeing its potential to slash the cost of getting to space drastically.

Musk calls it the holy grail of space technology! The Starship stands taller than the Statue of Liberty when fully stacked together, at nearly 400 feet! It is also taller than Saturn 5, the rocket that sent American astronauts to the moon during NASA’s Apollo program.

The Starship is designed to be roughly twice as powerful as the Saturn 5 and has a wider diameter than other orbital spacecraft at 30 feet. This will make it possible to transport large amounts of cargo or many people at once. To get to orbit, Starship sits atop a towering rocket booster called Super Heavy.

However, as soon as the two pieces of the spacecraft escape from the Earth’s atmosphere, the two parts separate near the edge of space.

As Starship continues to orbit, the Super Heavy booster that helped it off the ground returns for a landing near its launchpad. But the booster will not land per se because a massive tower equipped with mechanical arms, which Musk calls chopsticks, will grab the descending rocket to land it softly.

Starship will also return to the Earth’s atmosphere on its side. Shortly before landing, the Starship will reignite its engines to flip itself vertically for a soft landing, also to be caught by the chopsticks. Even before the first orbital test flight of the Starship, the spacecraft has seen lots of upgrades.

For example, SpaceX had been developing the rocket engine known as the Raptor that provides the thrust on the Starship. SpaceX is now working on the version of these engines, which offers more thrust, is easier to produce, and costs less to make.

About the new Raptor, Musk said a “complete design overhaul is necessary for the engine that can actually make life multi-planetary.” He also revealed the new engine wouldn’t be called Raptor. SpaceX has also revealed it will increase the number of Raptor engines on both the Starship and Super Heavy booster.

This will increase the total payload the spacecraft can lift from about 100 tons to over 150 tons. The company uses a different approach to rocket building that has allowed it to proceed at a quick pace.

It tests out whole prototypes instead of separate components. Sure, many prototypes have ended up in flames, but the disasters have helped SpaceX learn and make adjustments quickly.

What is amazing about the Starship, even before the new larger version revealed by Musk, is the many uses people outside of SpaceX have dreamed up for it and are currently spending money researching! The US military has its own concepts for SpaceX rockets.

In January, the Air Force gave SpaceX $102 million to study using the spacecraft as a cargo ship that could deploy resources to various parts of the world in a matter of minutes or point-to-point transportation.

Potentially, Starship would launch to orbit and re-enter over a particular region to deliver humanitarian supplies or military cargo in a fraction of the time needed by traditional military aircraft. The legality and logistics of such a concept are the only things remaining to be worked out.

Something else that was mind-blowing even before Musk revealed the new Starship is the cost implications. Despite its power and size, the rocket system is cheaper than the Falcon 9, primarily because of its reusable design.

Musk has revealed that Starship flights could cost as low as 2 million dollars per launch, compared to each Falcon 9, which costs roughly 62 million dollars! So, imagine what the new, bigger, and more powerful Starship 2.0 will be! There is no other way around it; Starship 2.0 is huge!

Musk revealed it is up to eight times larger than the current version! The CEO has said 2.0 will be 18 meters in diameter, doubling the 9 meters of the version his company is working on!

The original design of the Starship was 12 meters in diameter before it was slimmed down, which means Musk is not content with the reduction and wants to go bigger!

One thing about building rockets is that they follow proportions. For example, after doubling the diameter, you have to adjust the height. So let’s say SpaceX doubles the current height, currently 120 meters.

That means Starship 2.0 is 240 meters tall! That will yield a nine times volume increase! But the new height is the same as the popular Woolworth building in New York and three-quarters the height of the Eiffel Tower in Paris!

With this calculation, Starship 2.0 could be lifting about 1000 tons of payload per launch! If SpaceX had stuck to the original dimensions of the Starship, it would probably be able to lift 300 tons per launch, but this massive upgrade will more than triple that carrying capacity!

Of course, Starship 2.0 will require more Raptor engines. We could be looking at more than 100 engines per launch! This is why SpaceX is working on making the Raptor and its successor cheaper and faster to build because it would soon need lots of it!

Musk plans to bring down the cost to about $200,000 per Raptor, far below the current cost of about 2 million dollars! The most powerful rocket ever conceived was the Sea Dragon, designed by Robert Truax in the ’60s.

It stood 150 meters tall and could lift 550 tons of payload at once. But of course, it was never built. That would not be the case with Starship 2.0, which is even more powerful, because Musk has his goal for the upgraded rocket.

For example, the current Starship can transport about 100 people at once. That would take about 10,000 trips to meet his one million colonizer target. However, with the 2.0, he could be transporting between 800 and 1000 people per trip, significantly cutting the number of trips required.

Also, Starship 2.0 will allow Musk to move cargos that cannot be broken down. Setting up shelter on Mars will require heavy equipment like cranes and bulldozers, which are not easy to pull apart and reassemble.

Other equipment that will produce the fuel needed for return trips must be transported from the Earth, at least initially. Let’s hear what you think of Musk’s Starship 2.0 in the comment section below.

Thanks for reading till the end. Comment what’s your opinion about this information “Elon Musk’s INSANE NEW Starship 2.0 SHOCKS The Entire Space Industry“.