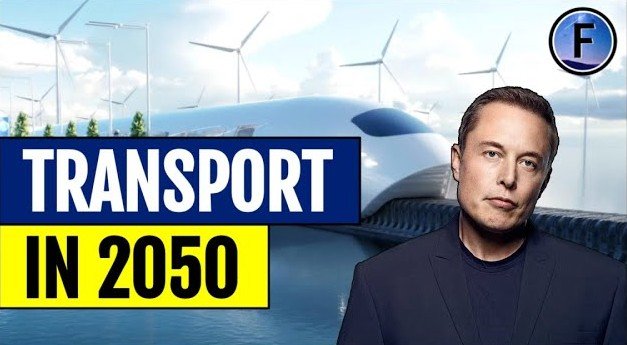 Future Transportation: These Concepts Will Blow Your Mind: Hello friends, today we will talk about how future transportation will be after decades from today. This sounds like a very mysterious question, so without delay let’s take you to the future.

Car companies have recently been telling us what a 2050 car will be like: autonomous is one word, electric is another, and it will also be connected to the Internet. sound impressive? It is, but it’s uncertain whether you’ll find it all on the road in the next few decades.

But what we are sure about is that these cars will be completely facelifted in the coming years. However, the directions being given are a very good starting point to look from afar and ask the question: What might a 2050 car look like?

Let’s start with the discussion, will there be vehicles in 2050 too? Would a discovery that would be 150 years old by then be replaced by something more beneficial? Will environmental matters kill it? As current research suggests, will people get tired of getting behind the wheel?

The answer seems to be “probably”, but the truth is that the automobile is a very free and flexible mode of transport. It satisfies the desire of people to move around easily and freely.

And – done right – the automobile can be a sustainable and safe means of transportation. But we must also recognize that this form of mobility comes at a reward, as polar ice melts, megacities become choked with haze and congestion, resources are depleted, and nearly 1.2 million people die in traffic accidents globally year.

We know why: We want to be transportable, and our mobility has few negative effects. So what can we do to make the automobiles of the year 2050 clean, safe, lean, and pleasant to use?

This is an important question: large-scale motorization in developing countries indicates that there will be more than three billion vehicles on the planet by 2050, compared to about a billion vehicles we have now!

Alternative Fuel Vehicles When we talk about the future, each of us will agree on one thing that our vehicles will not use fuel. By then either we will run out of fuel or our environment will be on the verge of destruction.

Increasing the use of alternative fuels and vehicles will help reduce fuel costs for consumers, reduce pollution and enhance the country’s energy security. One of the most popular forms of alternative vehicles is solar-powered vehicles.

We have an abundance of solar energy, and using it doesn’t pollute an ounce. Solar is the future, its use will not be limited to transportation only, but maybe our entire cities will run on solar power by 2050.

Alternative fuels are enabling people to drive their vehicles without having to drive. Electric vehicles can be charged at home.

Tesla, the world’s leading car firm, has also set up services around the world where people can go to charge their Teslas for anyone who wants to drive long distances.

Hands-free Driving Another most talked-about concept of the cars of the future is hands-free driving. Vehicles will be self-driving in 2050, yes you heard that right!.

Companies are working on concepts that allow cars to travel on the highway without driver intervention, many of which may soon be seen on our roads.

There’s Super Cruise from General Motors, which manages the vehicle on long highways when there’s not much going on. Then the traffic jam from BMW is helpful; Where vehicles move like a school of fish in a packed traffic area.

Or is the road train from the European Sater project involving Volvo, where a vehicle with a professional driver guides an army of other vehicles, virtually connected, and chases along the highway like pearls on a string.

Converting travel to a potentially more useful time as drivers can now work or rest on the road. And when the car reaches its address, it can park itself in a high-tech parking house.

Will the driver have to do anything? Or will there still be a steering wheel? Cars would obviously expect drivers to see what the vehicle does and shift from one mode to another – such as highway driving for city driving.

There will probably still be a steering wheel, but some models may have a little joystick that the driver rarely practices. Driving is expected to be safer and more effective, as centralized traffic control will dictate an easier flow and less congestion.

But the impact of this new technology will depend on how it is implemented on a large scale. Change cannot stop there. We could also have other types of automobiles, which are smaller in size, highly effective mobility pods similar to the GM EN-V concept, or autonomous carriers like the Induct Navia.

These will be modern, adaptable solutions for moving people around. In various metro areas, a well-organized public transport system would be the most efficient way to transport a large number of people.

However, some travelers may not want to take it due to network constraints, schedules, or security concerns.

Publicly on-demand transportation operations that can hold up to six people will automatically bring passengers to their destinations in downtown neighborhoods, and then move on to serve others.

Consumers just have to enter their destination and payment information – think of it as a fully automated taxi system. Digital Frontier Personal mobility will become a service that firms like Google have embraced.

The search and computing giants have been actively involved in designing automated vehicles. And some people think that the car should help us in other ways, whether we drive it or drive it ourselves.

Several car corporations are already working with Apple to merge Siri into the automobile, creating virtual personal assistants in the car to help us with routes, traffic information, and schedule our day. Can you

Our vehicles will blend perfectly into the digital lifestyle of 2050 – whatever it may be. It’s hard to imagine what the world of Apple, Microsoft, Facebook, and Google will be like in the next 30 years, but we can assume that everything with a digital representation will be available for use in our cars.

This vehicle appears to be the ultimate frontier for the digital lifestyle – something people want to exfoliate while driving – but in the coming decades, it will be fully connected and – possibly – safe to use.

Morphing Motors People value generosity; Will they want it from their car just as they have come to demand it from their smartphones and laptops?

Since mobile technology has enabled us to make decisions on everything in a jiffy and away from home, we want the same freedom in our cars.

The driver of the future may have a “personal mobility portfolio”, of which the car is only a part of it. You can drive for pleasure on weekends.

As mobile internet becomes even more compelling, it will be completely normal and convenient to step on the road and make quick decisions.

You can board a self-driving shared vehicle. You can get in the car of a social-media friend who is driving just the way he is, and keep going. Or you will catch public transport, it is the best option.

The car will be fully integrated into a larger mobility network. We are now looking beyond existing car-sharing systems, such as Zipcar, where people can book cars for the hours they really need them.

There will be a range of different options for unifying services in places such as airports, all linked into one app on our 2050 communication device.

We basically just have to tell the app where we want to go and, based on our choices, three different customized transportation forms will be suggested, similar to the three different routes that a GPS navigation system uses today. The system suggests us.

There’s one more question to ask: what will a 2050 car look like? Will we still be able to recognize it? It may still have a steering wheel, maybe just a joystick. It is safe to believe that it will still have four seats and wheels and it may still resemble a metal box.

But this is where the comparison can end. Carbon fiber or other lightweight materials can replace steel. The design will be a combination of the appropriate motifs and sentimental styling. And there will probably be some sort of resizing.

MIT has studied some very encouraging vehicle concepts that support a smaller footprint in the city and a more secure and powerful configuration for the open road. Recognizing a 2050 car can be comparatively easy, which may not be true for a phone or computer.

That’s because a car is a car – it’s supposed to carry people and goods, and as long as people stay as they are cars, not much will change. But the private automobile as we know it will have a lot of competition: from remote-controlled, on-demand pods and personal public transportation.

These glimpses of the future of transportation are our assumptions based on advances in technology so far. We don’t know yet how many of these concepts will turn into reality, but we are sure that the future is about to blow our minds!

Thanks for reading till the end. Comment what’s your opinion about this information “Future Transportation: These Concepts Will Blow Your Mind”.

6 thoughts on “Future Transportation: These Concepts Will Blow Your Mind”