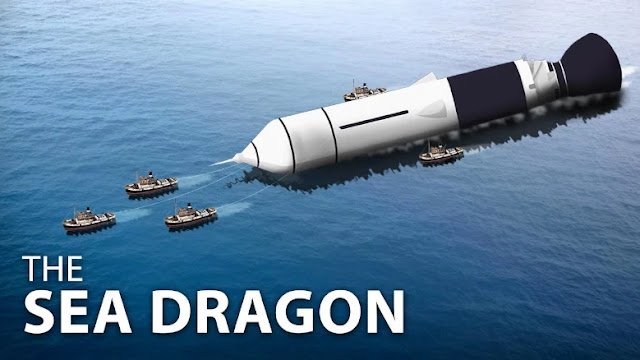 The Biggest Rocket Ever That Never Launched – Sea Dragon: In November 1967, NASA launched the iconic Saturn V rocket for the first time. At 110 meters long and producing 7.6 million pounds of thrust, the Saturn V still holds the record for the largest and most powerful rocket.

But a rocket designed years before the Saturn V would have broken the scale of rocket design and changed the course of rocket technology. The rocket was known as the Sea Dragon.

It was a massive two-stage rocket, intended to cut costs and launch extremely heavy payloads into space. The idea for the Sea Dragon came from engineer Robert Truex in the early 60s.

Truax envisioned a semi-reusable two-stage launch vehicle capable of delivering enormous payloads to the Moon and Mars. Simplicity, reusability, and cost savings were the guiding principles behind the rocket’s design.

The first stage of the Sea Dragon consisted of a single-engine instead of several smaller engines like the Saturn V. Instead of using complex fuel pumps, it had liquid nitrogen tanks that pressurized the fuel tank and pushed propellants into the engine.

Removing complex and unreliable fuel pumps would make engines cheaper to manufacture and easier to refurbish. Since both stages of the rocket were designed to be refurbished and reused, they had to be carefully retrieved after each launch.

Once the rocket is launched and has reached an altitude of about 38 km, the engine of the first stage will be cut off from the second stage. It will continue to fall back to Earth using an inflatable flare.

This would help slow down the stage and orient it in such a way that the engine would not be damaged once it hit the sea. The second stage will follow the same path back to Earth after putting the payload into orbit.

Given the enormous size of the Sea Dragon, it would have been too large to build and transport on land. The incredible amount of shockwaves generated during liftoff would have been strong enough to damage the launch pad and the rocket itself.

To overcome these issues, rockets would need to be built and launched at sea. The rocket will be built at a shipyard and taken to the launch site.

To orient the rocket vertically, 6 tanks near the base of the rocket would be filled with water and submerged the engines in the ocean. Although sea-launched rockets had already been used during World War II, the technology had never been tested on such a large scale.

To begin testing the Sea Dragon, engineers modified a US Navy rocket nicknamed the ‘Sea Horse’. Testing began in San Francisco Bay where engineers fired the rocket’s engine on a barge above the water and slowly lowered it into the water.

Engineers found that once submerged, the engine continued to fire fully and the sea substantially reduced the shockwaves. The success of this test opened the door for Sea Dragon to become a reality.

However, like many other rocket designs, the Sea Dragon failed to leave the drawing board. As the 1960s approached, the budget for NASA was cut as the United States went to war with Vietnam. At the height of the decade, NASA’s annual budget peaked at $5.9 billion.

Over the next few years, his budget was reduced by 37%. These cuts ended many of NASA’s experimental research programs, including the creation of the Sea Dragon.

In many ways, the sheer size of the rocket’s design contributed to the downfall of the Sea Dragon. As the development of the Saturn V rocket continued, NASA was taking advantage of the rocket being much larger and more powerful than before.

Although Sea Dragon would have opened the door for even larger payloads, NASA can’t justify the cost of developing the unproven technology needed to turn the Sea Dragon.

From a technical point of view, there were also concerns about combustion instability for such a large rocket. The Sea Dragon would have generated more than 79 million pounds of thrust at liftoff, 10 times the volume of the Saturn V – which had problems with its own combustion instability.

Either way, the Sea Dragon will go down in history as one of the craziest rocket concepts that almost happened. Since the retirement of the Saturn V in 1973, SpaceX’s Starship rocket is the closest we have to the Sea Dragon concept.

The Starship is 118 meters long and designed to produce 16 million pounds of thrust. So although we never got to see what happened to the incredibly ambitious Sea Dragon, we can look forward to the exciting future that lies ahead in the space shuttle world.

Thanks for reading till the end. Comment what’s your opinion about this information “The Biggest Rocket Ever That Never Launched – Sea Dragon“.