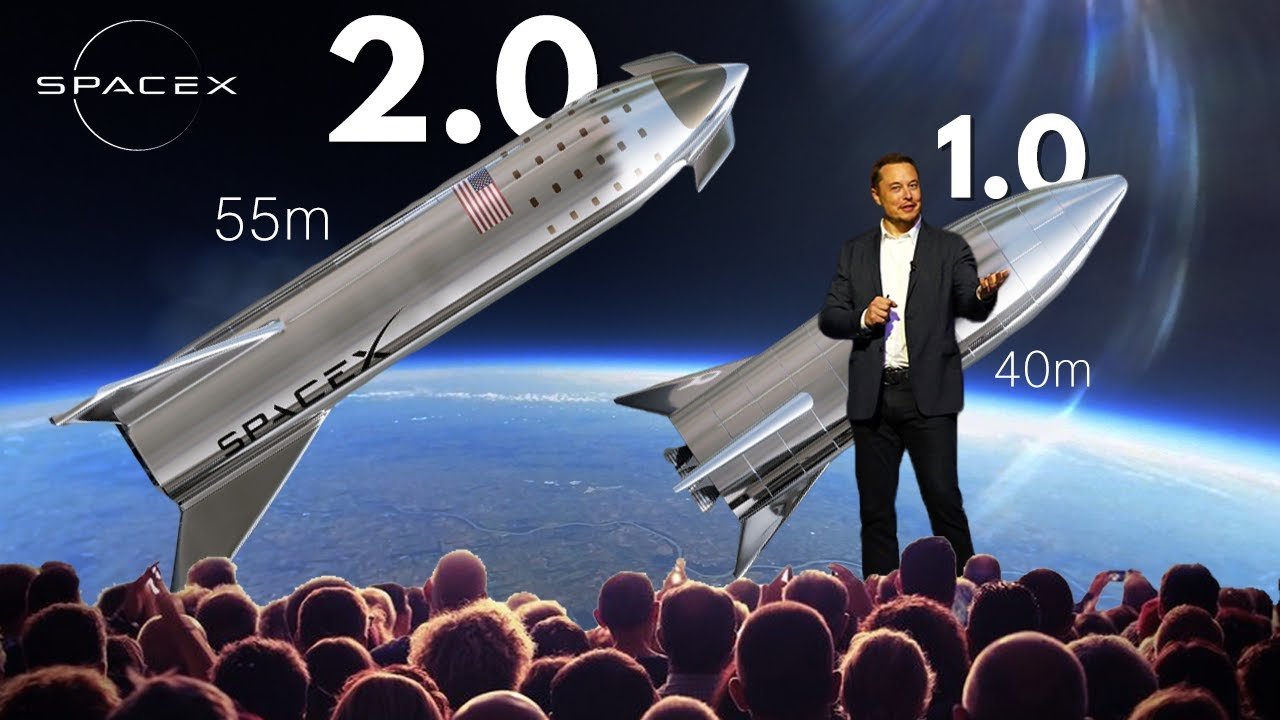 Next Generation Cargo Ship – Starship 2.0: Progress is picking up satisfactorily for the Starship’s development. Well, we may have exaggerated a little in the sense that it may not be satisfactory for the fast-living entrepreneur like Elon Musk.

The Starship is set to go places, and it has to be continually improved to reach even further, and that’s exactly what Elon Musk is doing as he finally reveals the new 18m wide starship 2.0. And we’ll be looking at all the details in today’s article.

Aims For The Starship

You’re undoubtedly aware that Starship will be a completely reusable orbital launch and reentry vehicle with a height of 120 meters (390 feet), 9 meters (30 feet) higher than the Saturn V. A Super Heavy booster and a Starship spacecraft make up the rocket’s two stages.

The Raptor and Raptor Vacuum engines power both stages, which feature bodies constructed of SAE 304L stainless steel. Since SpaceX produces Starships through operational testing, rather than testing each component individually, prototypes are flown directly. As a result, its design is flexible.

One Starship launch is expected to be capable of delivering over 100 t (220,000 lb) of payload to low Earth orbit in a completely reusable configuration. Starship may deliver payloads to higher Earth orbits, the Moon, Mars, and other destinations in the Solar System by refilling the spaceship with more Starship tanker ships.

Whether it’s humans or satellites, the rocket can launch practically any space cargo. The colonization of Mars is a goal that has been stated time and time again by Elon Musk over the years as one of the primary aims of the Starship.

Musk argues that a million-person Martian metropolis might be self-sustaining. Without taking into account population increase, at least ten thousand crewed Starships and a hundred thousand cargo-carrying Starships would be required.

He projected that 1 million t (2.2 billion lb) of cargo would be delivered to Mars. SpaceX has officially said that they intend to mass-produce Starships and go to other parts of the Solar System. The company’s Mars program has been delayed many times, contradicting Musk’s bullish expectations.

In a power-to-gas plant on Mars, the Sabatier reaction might be utilized to make liquid methane and liquid oxygen, which could be used to drive return flights. The reaction operates by introducing carbon dioxide and hydrogen to a catalyst at high pressures and temperatures exceeding 375°C (700°F).

Carbon dioxide and hydrogen gas can be derived from Mars’ atmosphere and ice, with nickel, ruthenium, or another transition metal serving as a catalyst. The process is inefficient in terms of energy consumption, necessitating a complex heat control system, and the resulting methane must be filtered before use.

Managing this kind of breakthrough will require further revisions of the Starship design with data from practical tests, and that’s exactly what SpaceX has been hard at work doing.

Following prior versions that incrementally improved certain components of the design, the SN8 prototype was the first full Starship prototype. Between October and November 2020, the vehicle was subjected to four static fire tests, all of which resulted in damage to the pad. The third test absorbed pad material pieces into the engine’s internals, causing it to shut down prematurely.

The fourth test went well, and on December 9, 2020, SN8 took to the air, reaching a height of 12.5 kilometers (7.8 miles) before conducting the belly flop maneuver. SN8 recovered to vertical just before landing and attempted to land, but owing to a fuel supply problem, slammed into the pad at high velocity, destroying itself. Starship SN9 launched two months later, on February 2, 2021, following a nearly similar flight path.

It landed with a thud. Both SN8 and SN9 flights had been under examination by FAA since debris from the explosion endangered the surrounding region. The business presented a public development proposal in March 2021 that included two sub-orbital launch pads, two orbital launch pads, two landing pads, two prototype test stands, and a massive propellant tank farm.

The company also suggested turning Boca Chica Village into a metropolis called Starbase, which would serve as a suitable site for all development and testing from that point on. The SN12, SN13, and SN14 modules were not completely assembled.

SN15, on the other hand, had a number of changes to the vehicle’s construction, software, and engines. On May 5, 2021, the vehicle took to the air, doing the same maneuvers as previous prototypes before landing, completing the first successful mission.

In a filing to the Federal Communications Commission, SpaceX detailed the intended trajectory of the Starship system’s maiden orbital trip. The rocket will launch from Starbase, then detach and make a gentle landing roughly 30 kilometers (20 miles) from the Texas coast.

The spacecraft will continue on its ground route via the Straits of Florida before landing softly roughly 100 kilometers (60 miles) northwest of Kauai. The Next Iteration of Starship Musk pondered the size of SpaceX’s next super-heavy launch system on Twitter in 2019, as he shared drone footage of the test.

According to Musk, the next-generation system (dubbed “Starship 2.0“) would be double the size of the vessel that will transport personnel and cargo to the Moon and Mars. Musk made the comment in response to a question from one of his numerous Twitter followers.

They wanted to know if Musk planned to create a larger version of the Starship in the future, one that was more close to the original concept. Meanwhile, the Super Heavy booster element will stand at least 70 meters (230 feet) tall and provide up to 90,000 kN (19,600,000 lbf) of force.

As Teslarati’s Eric Ralph points out, accounting for the area and volume that this diameter implies yields some intriguing results. You acquire eight times the surface area and fuel tank volume by doubling the rocket’s height and breadth. This means the launch vehicle would have to be eight times the weight of the Starship 1.0 and generate eight times the thrust.

Despite the fact that the Starship 2.0 would require four times the number of engines maybe 120 to 150 Raptors for the new Super-heavy and 24 for the Starship 2.0, the structure would only require twice the quantity of steel and twice the amount of heat shielding.

Welding and “ring stacking” tasks would also be doubled, however, by the time Mk 2 goes into production, they will primarily be automated procedures. So a Starship 2.0 may be much less expensive than four of its predecessor…not half as much, but certainly not four times as much.

Raptor engines are now priced at over $2 million each, but Elon expects this to decrease to $200,000 in the near future. Another rationale for such a monstrous Starship, as previously theorized, might be that Mars requires 600-tonne payloads that are difficult to separate into 150-tonne chunks.

Iron ore excavators and steel mills with large cauldrons and rolling mills will be required if the colony is to become self-sufficient in the long run. These are the things that are difficult to divide into smaller loads. The 9-meter payload bay diameter begins to pose a challenge for some of the items that the Mars colony may require in the future.

By going between spaceports on Earth, the vehicle may be able to ease point-to-point travels better than the original Starship – dubbed “Earth-to-Earth” by SpaceX. This method of transportation is expected to take 39 minutes to go between New York City and Shanghai, according to the company.

Gwynne Shotwell, president, and chief operating officer of SpaceX, believes it will eventually be cost-competitive with business class travel. According to John Logsdon however, an expert on space politics and history, point-to-point travel would need tremendous acceleration rates, making it impracticable.

Maybe the Starship 2.0 will have a slower-moving variant? Who knows? To be sure, this is just conjecture at this moment. However, it is impossible to deny that it is an intriguing possibility.

Musk’s reference to a next-generation spacecraft with a diameter twice that of the present Starship is also in keeping with his ambitious character. We’ll have to wait and see what happens, but Elon Musk has a well-documented history of surprising people.

Thanks for reading till the end. Comment what’s your opinion about Starship 2.0.