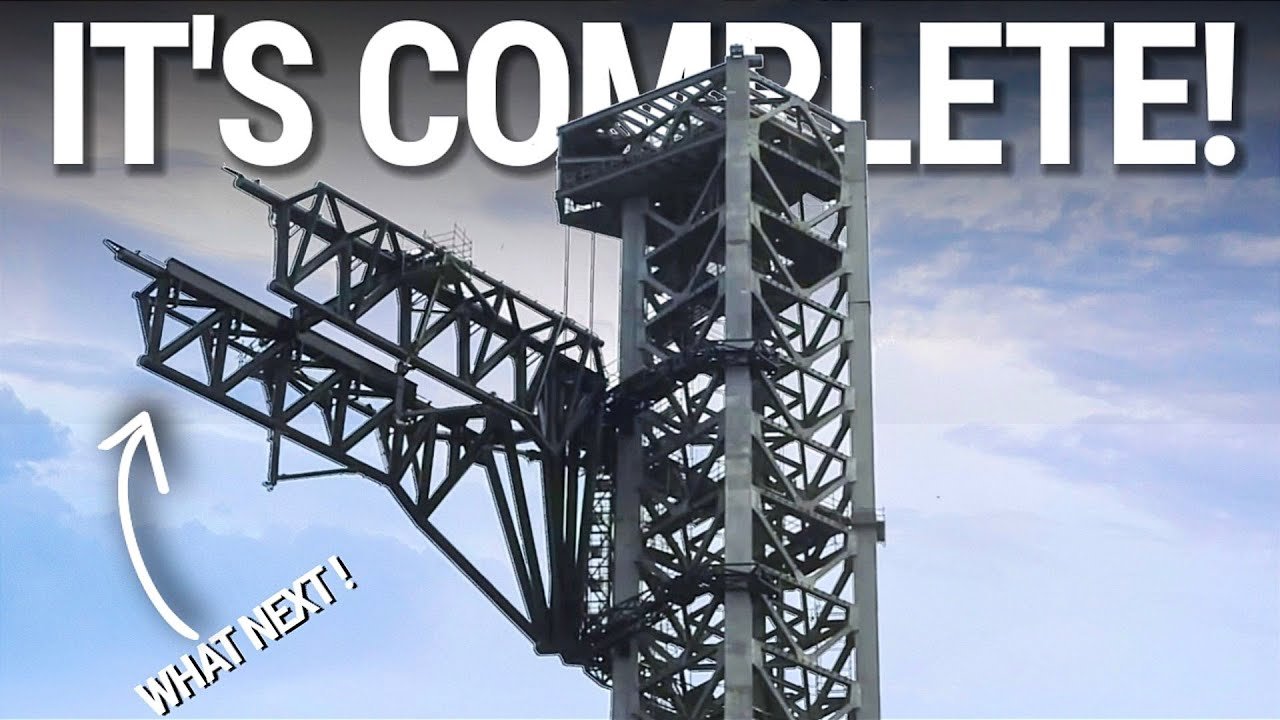 Four days later, SpaceX performed a variation on the first round of tests, again slowly lifting the assembly up the side of the launch tower and opening and closing the arms. The most notable difference was the addition of several tandem swing tests, which hinted at more applied tests that were soon to come.

SpaceX also performed some basic tests with a third Starship fueling arm higher up on the tower, very slowly swinging it towards where Starship would be standing. On Sunday afternoon, a third major round of testing kicked off.

This set of tests was considerably more focused than the prior two, suggesting that it was more of a simulation of the main purpose of the arms. Instead of lifting a few dozen feet and performing basic actuation and coordination tests, SpaceX simply lifted the arm assembly up along the tower’s exterior and didn’t stop.

There were a few temporary pauses but the arms ultimately reached the approximate height they’d need to reach to stack a Starship on top of a Super Heavy booster. In fact, despite being (in)famous for being partially designed to catch boosters and ships out of mid-air, the main purpose of the arms – and likely the only reason they exist at all – is to safely, accurately, and precisely lift, install, and stack Starships and Super Heavy boosters.

SpaceX could obviously use a giant crawler or tower crane to accomplish a similar feat but cranes – especially large and tall ones – are extremely sensitive to wind conditions and effectively become very unsafe to operate in anything more than a brisk breeze.

To put it lightly, even the average weather on the South Texas Gulf Coast is anything but conducive to the routine and reliable operation of giant cranes, which is exactly what SpaceX would need to avoid near-future Starship launch and recovery operations being constantly delayed by weather.

On January 9th, SpaceX appeared to test exactly that function. Before the day’s testing began, workers installed a large steel bar believed to be a weight simulator between the arms. Just like a booster would, the simulator sat – one end resting on both arms – on two small steel appendages identical to those present on all recent Super Heavy prototypes.

On top of serving as a hardpoint for cranes, the downward-facing end of the L-shaped structures are capped with a small steel tip designed to take the whole weight of a Super Heavy. Those two minuscule steel caps – each no more than a foot wide – are what SpaceX (or at least CEO Elon Musk) wants Super Heavy to ‘land’ on to be “caught” by the launch tower’s arms.

More importantly, those caps – covering heavy-duty bearings – are also what the arms will ‘grab’ and manipulate to carefully position Super Heavy boosters for launch mount installation.

To do so, each arm has a pair of parallel screw rods that can move together to shift the booster closer to or further away from the launch tower or move in opposite directions to slightly rotate it. Once the arms reached the top of the tower, SpaceX performed several swing tests, mirroring the kind of movements they would use to carefully lift Starship, swing it over top of Super Heavy, and mate the two stages.

Ultimately, the tower seemed to complete the simulation without any showstopping issues. Up next, it’s possible that SpaceX will add weights to the simulator bar to fully simulate the 100-200 ton masses of Starship and Super Heavy.

Eventually, SpaceX may also use Starship S20 and Super Heavy B4 to fully qualify the arms by actually lifting, stacking, and removing both stages. Only minutes later, Ship 20 was removed from atop Booster 4, as fit checks – and the obvious photo opportunity – was the goal of this first stacking.

Both Booster 4 and Ship 20 were sent back to the Production Site for additional work, while Booster 3 was partially scrapped and remains at the Suborbital launch site. It has since been rejoined by Ship 20, which has performed several static fire tests, culminating in firing all six of its Raptor engines, a first for any Starship and the current record for most Raptor engines fired at once.

Ship 20 now resides on Suborbital Pad B. Booster 4, meanwhile, had aerodynamic covers attached and several engines swapped. It was lifted back onto the now-nearly-complete orbital pad for a third time in December, where it performed cryogenic proofing.

The 400-foot-tall launch tower is equipped with giant clamp-like robotic arms, nicknamed ‘Mechazilla’, designed to stack the 160-foot-tall Starship atop the 230-foot-tall Super Heavy rocket. It will also ‘catch’ the stainless-steel vehicles as each descends to the launch pad, soon after propelling the payload to orbit.

Mechazilla will enable the company to recover the launch vehicle quickly to relaunch it in under an hour. SpaceX teams in Texas are preparing to perform a debut orbital flight test. For the past six months, engineers have been performing pre-flight testing on Starship SN20 and Super Heavy Booster 4 prototypes that will attempt the ambitious flight.

It looks like Mechazilla is ready to support the mission. Even though Mechazilla will not be catching any spacecraft during the upcoming test flight, we will soon see the launch tower robotic arms in action – when SpaceX stacks SN20 atop Booster 4.

SpaceX is waiting to receive approval from the U.S. Federal Aviation Administration (FAA) to perform the debut Starship orbital flight that will lift off from South Texas and land in the ocean off the coast of Kauai, Hawaii.

The FAA said it aims to complete an environmental assessment of the Starbase launch site by February 28. Then the company will be able to apply for an orbital flight license. This week, SpaceX appeared to be testing the mechanical movement of the launch tower arms.

Local Boca Chica photographers captured images of the robotic claws opening and closing. And this morning the arms were moved up and down and to the very top of the 400-foot-tall launch tower. SpaceX has not yet released an official animation to demonstrate how the launch tower will stack and catch Starship and Super Heavy.

However, a digital artist, @ErcXspace via Twitter, shared an awesome depiction of how Mechazilla might operate, video shown below. Elon Musk even liked his video animation last year, stating that the animation is “Very close to real! Arms are able to move during descent to match exact booster position,” he commented under the video and provided more details of the mechanism design, “Catch point is off to side, in case catch fails – don’t want to hit launch mount.

Booster is transferred back to launch mount for next flight. Designed to have <1 hour turnaround,” Musk said. Future goals will also require clarity, with SpaceX’s additional Starship locations, ranging from the return of construction to the 39A facility, the future option of LC-49 – along with the potential of utilizing the spare High Bay in the iconic Vehicle Assembly Building (VAB) – and the projected expansion of SpaceX’s Roberts Road site. T

here may even be a long-awaited update on the since-forgotten ocean platforms, Phobos and Deimos. Although Musk has always stated that Starship’s opening salvo of flights, many in number, will be uncrewed, the Dear Moon flight remains on the books, along with the Human Landing System (HLS) contract with NASA.

SpaceX has applied to the FAA seeking permission to fly up to three orbital flights per year in the development phase and five in the operational phase from Starbase.

Thanks for reading till the end. Comment what’s your opinion about this information “SpaceX Starship Launch Tower Almost Completed -2022“.