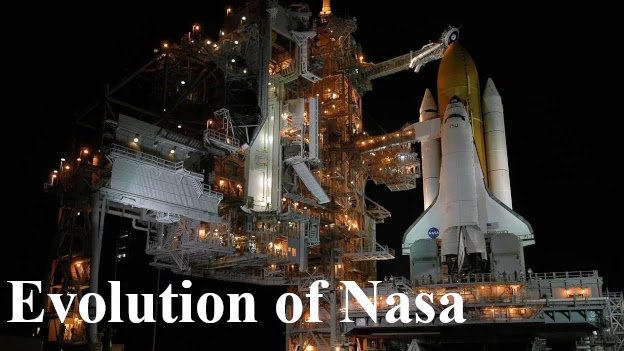 Origin of Nasa (National Aeronautics Space Agency): When it comes to achieving incredible feats of aerospace engineering, Exploring the wonders of the universe, And realizing the dreams of astronauts from around the world.

There’s one organization that stands above all others. This is the Evolution of NASA. In this article, we will cover the origins of NASA.

In order to catch up, the NACA or National Advisory Committee for Aeronautics was founded In 1915 on a mission to change the face of U.S. aviation. The research of this committee and its technological expertise laid the foundation for NASA.

Unlike NASA’s current huge budget of 22.6 billion dollars. The NACA initially only had a budget of 5,000 dollars. NACA received more funding in the following years, leading to groundbreaking research.

They developed and tested new advanced airplane concepts And fixed problems the Aviators had. For example, a common problem in the 1920s was that a wing would break off, Yea.. that’s not too nice if you’re flying at an altitude of 13,000 feet.

Fortunately, NACA succeeded in making the wings stronger and more aerodynamic. During World War II, these wings were not only on US aircraft But also on the British Spitfire and even on enemy aircraft like the German Focke-Wulf 190.

Second World War changed the pace and the kind of work that was done by the NACA. Originally, every United States aircraft in the war was tested and improved by the NACA.

After the Second World War, the Committee has developed Bell X-1. It was an aircraft powered by a rocket engine That could reach supersonic speeds, upwards of 800 miles per hour.

Chuck Yeager became the first person to fly faster than the speed of sound in this machine in 1947. Flying the Bell X-1 Yeager breaks the sound barrier, making him the fastest living person.

But then things quickly changed When tensions increased between the United States and the Soviet Union. In what came to be known as “The Cold War”. It was during this time that the two superpowers began competing for a number of achievements in space Starting the ‘Space Race’.

On 4 October 1957, the Soviet Union dealt a major blow with the successful launch of Sputnik.1. It was the first satellite placed into orbit Sputnik, which is Russian for ‘fellow traveler’ was about the size of a volleyball And featured 4 antennas that transmitted beeps.

Those beeps were heard on radio’s everywhere in the world And confirmed America’s worst fear. The Soviet Union technically overtook the United States.

Now, the United State military seemed to have fallen behind in developing new technology. As a result, the launch of Sputnik 1 intensified the arms race and increased Cold War tensions.

It was not Sputnik that made the successful launch so important. It was a 29-meter-long rocket that made it possible to enter space. It had 4 strap-on boosters, a total thrust of 970-kilonewton at lift-off.

Laika was found roaming the streets of Moscow. Soviet scientists deliberately chose a street dog because they believed that such a dog had already learned to endure extreme cold and hunger conditions.

Before the launch, one of the scientists took Laika home to play with their children. He described Laika as a calm and charming dog. Sadly, once Sputnik 2 was launched into space, there was no way to bring it back to Earth. Laika died from overheating due to the malfunction.

Despite their successes being short-lived, The Sputnik launch signaled a new era of technological, military, and scientific development. For the United States, however, they were seen as a ‘crisis’ and one thing was certain that the US had to come back, to not be further behind from the Soviet Union.

The rocket would carry a small, 1.5-kg satellite with a diameter of only 16 centimeters, making it smaller than Sputnik 1.

The Vanguard rocket was launched in December 1957 and although it was more of a test than an actual launch. It was seen as “America’s response to Sputnik”. But it did not go well It reached an altitude of 4 feet or 1.2 meters before it fell and exploded. The press mocked the failed attempt by calling it ‘Kaputnik’.

After the failure of the Vanguard rocket, the US Army began to develop the Juno 1 rocket. Juno 1 was a descendant of the German V-2 rocket used by Nazi Germany during World War 2. The V-2 rocket, also known as the ‘Vengeance Weapon’, was the first long-range guided ballistic missile. It was Hitler’s secret weapon to attack London.

Werner Von Braun was a key figure in the development of the V-2 rocket. Von Braun had ambitions to land a rocket on the moon. And said that apart from landing on the wrong planet, the V-2 rocket worked perfectly.

After Germany lost the war, Von Braun was secretly taken to the United States with his team along with Operation Paperclip. Because there was a military interest in V-2 technology.

Under the direction of Von Braun, Juno 1 was developed. The rocket was 21 meters long, had 4 stages, and while the Sputnik rocket could carry an estimated 500 kilograms of low-Earth orbit. The Juno 1 could only lift 22 kilograms.

On January 31, 1958, the Juno 1 was launched, producing a total thrust of 416 kilonewtons. It was a success and the first American satellite, the Explorer 1, was sent into space.

This close-up version of United States Sputnik was created at a press conference with Dr. Werner von Braun, the leaders of the scientific teams.

Due to the work of Von Braun and other former Nazis, America managed to succeed and it was the beginning of Von Braun’s career that would become a major figure for NASA.

Von Bronn was certainly a very controversial figure due to his past. He died in 1977 and is remembered in two ways, either as a hero who did a great job for NASA or as a rogue former Nazi who made powerful bombs, killing thousands of innocent people.

Nonetheless, Explorer 1 was a major success for the United States. However, the US was still lagging behind the Soviet Union and there was much more to be done to defeat the Soviet Union. So a historic moment occurred in July 1958 when NASA or the National Aeronautics Space Agency was formed.

NASA took over from NACA and the goal was very clear that NASA would establish the United States as a leader in space exploration.

Thanks for reading till the end. Comment what’s your opinion about this information “Origin of Nasa (National Aeronautics Space Agency)”.