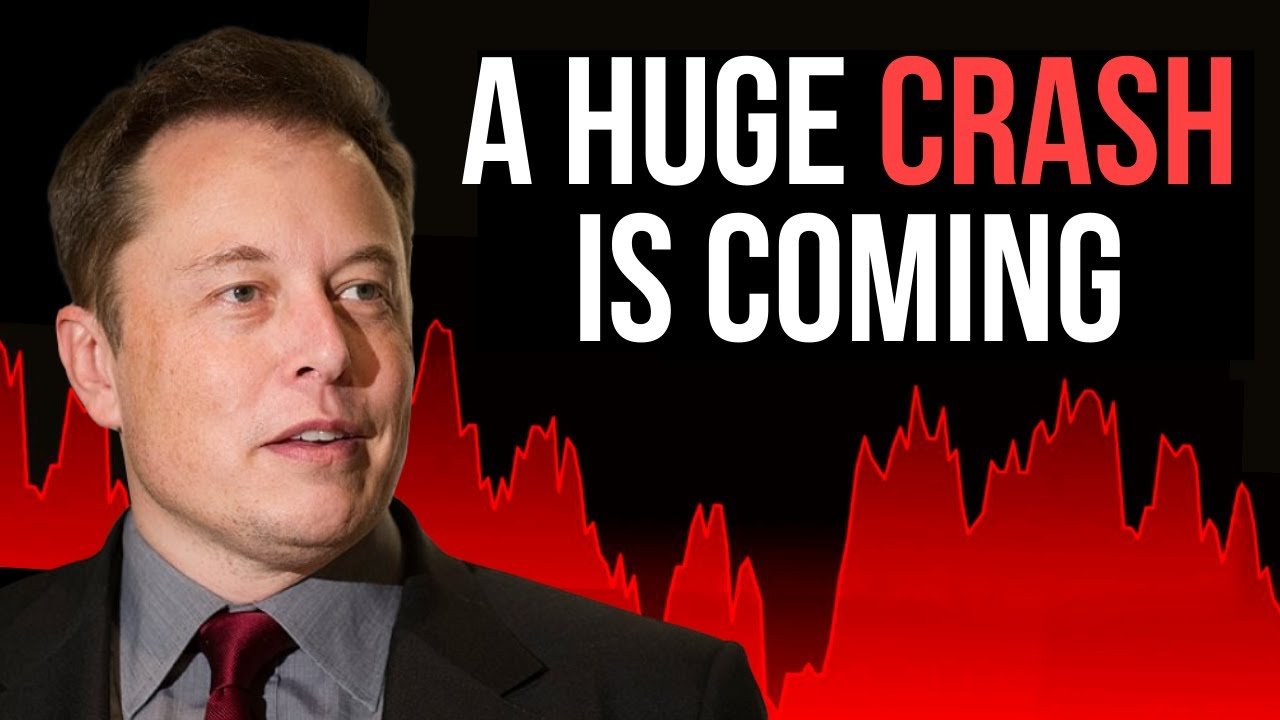 Elon Musk: America Is Entering A Terrifying Financial Crisis: When the Great Recession hit globally between 2007 and 2009, it was huge. The International Monetary Fund (IMF) concluded that it was one of the most severe financial and economic meltdowns since the Great Depression.

The scale and timing of the recession were different from country to country. Countries with the most developed economies were affected the most, and the world saw a decline in international relations. When the richest man in the world has something to say about a country’s finances, the least we should do is listen and Elon Musk has some interesting things to say about the USA’s financial situation.

Join us as we discuss why the business mogul thinks America is entering a horrific financial crisis. When Elon Musk tweeted his prediction about the impending financial crisis, everyone was shocked, wanting to know how and when it would happen.

Musk’s tweet was in response to a tweet that the author has long since deleted. The tweet contained a list of 936 private companies valued at over 1 billion dollars. The tweet read, “there are 936 startups valued at more than $1 billion in the world today. What do we think this chart looks like in, say, five years?”.

Elon Musk replied to the tweet, saying, “If history is any guide, not many will make it past the next recession.” Elon Musk’s tweet got a reply from another Twitter user, who was eager to know when the next recession would be.

Elon Musk’s response sparked a conversation most people don’t want to hear. In Elon Musk’s response, he admitted that predicting macroeconomics is challenging, but his gut feeling tells him the next recession will be around spring or summer of 2022, but not later than 2023.

Dave Lee, the host of a YouTube channel that talks about investing, and a TSLA (Tesla) investor since 2012, challenged Elon Musk, wanting to know why Elon Musk thinks a recession is imminent since it is one of the hardest things to predict in economics.

Elon Musk didn’t go into details to explain his tweet. He didn’t specify whether this would be something like the Great Recession or worse. The Chief investment officer for the Leuthold Group, Doug Ramsey, made an observation about the financial state of the country.

He believes that the Recession preached by Elon Musk will start with the sale of US stocks. He found out that the US Stock Market is at a high point where there are not enough new funds outside the stock market. This has only happened three times in history, all in December 1999.

Most of the money in the US Stock market is accumulated in the accounts of the few companies on top, which means that the profile of most companies isn’t looking great. Over the years, financing has become a lot more complicated, and the Federal Reserve isn’t changing its frugal monetary policies.

This means that the tight liquidity situation is steadily increasing. On that same Twitter thread, a user who goes by Chris Smithson pointed out how much money per hour every person within the working-age has to pay in taxes to keep the Federal Budget funded without increasing the deficit.

With a chart, the user pointed out the bump in 2008 and compared it to how much it grew in 2020. The amount went up from almost $15 per hour to over $20 per hour. The inflation level in the United States has reached the highest it has gotten to in years.

The prices of goods have been steadily increasing for the last six months. The ability of the Federal Reserve to withdraw from the quantitative easing monetary policy will determine whether there will be a financial crisis or not. This isn’t the first time Elon Musk has had a pessimistic view of the economy.

He was in a Twitter bout with a leading democratic politician a while back. He joked about Bernie Sanders’ old age and called him a taker, not a maker. He also made comments about the impact of the budget deficits on inflation and the lack of control that the government has overspending.

Elon Musk has also talked about inflation being the most regressive tax. A regressive tax is when people on the lower rungs of the income ladder are paying a higher percentage of their income to tax than wealthier people.

In the United States, people with higher incomes pay more tax. But Musk’s point is that inflation has the same effect as a regressive tax. During inflation, the people affected the most are people who keep their money in cash.

Pensioners and people who have fixed incomes will suffer as their buying power is depleted. The wealthy might not be affected as much because the value of their investments keeps increasing. The super-wealthy do not feel it because they have financial control, and they can increase their wages to match up to their expenses.

Elon Musk is not the only tech billionaire who has preached doom concerning the future of America’s finances. The former CEO of Twitter, Jack Dorsey, has spoken about hyperinflation and how it will change everything; he even claims it is already happening.

The first case of hyperinflation occurred between 1795 and 1796 in post-revolutionary France. We have also seen instances of hyperinflation in recent times, as in the case of Venezuela. Zimbabwe is one of the most famous cases; people had to carry wads of cash to purchase necessities like food.

The central bank had to change currency, printing notes that had many zeros behind them. Hyperinflation is a nightmare that shouldn’t be wished upon any society. Higher-ups in the finance sector were quick to oppose Jack Dorsey’s opinion about the American economy’s state.

The CEO of Ark Invest, Cathie Wood, challenged Jack Dorsey’s claims. She spoke about how she thought inflation would increase when the Federal Reserve started quantitative easing in a tweet. But she was wrong.

Instead, the rate at which money turns over each year declined, taking away the possibility of a rise in inflation. In an ensuing Twitter thread, Cathie argued that the steady price increases affecting consumers should start reducing after the holiday season has passed.

She attributes the decrease in prices to three sources. She spoke about creative destruction being one of the sources of deflation thanks to disruptive innovation. Tech and Telecom have come a long way since the Global Financial Crisis of 2007 to 2009.

Most companies have catered to shareholders who want their profits and dividends now. These companies have leveraged their balance to pay dividends and buy back shares instead of investing in innovation.

Companies like these would be forced to service their debts by selling goods that have become obsolete at meager prices, which is equal to deflation. She also cited the over-ordering and stockpiling of goods that resulted from the COVID-19 pandemic.

Most people are buying two or three times more than they usually would. Most businesses shut down during the coronavirus crisis and are still trying to get back up. Once the holiday season passes and these companies face excess supplies, the prices should relax.

The prices of commodities like Oil and Lumber have already dropped by 50 percent, and the oil price is important. She notes that the global oil demand is less than 2019, and it seems unlikely to return to its old high. The oil price has broken a string of lower highs and is above the $77 hit in 2018.

She also pointed out that the influence of social, governance and environmental mandates has forced most energy companies to shift their focus from mature fossil fuels to nascent renewables. Banks have also stopped funding tracking companies after the near-death experience in 2020.

The adoption of electric vehicles has accelerated, sowing the seeds for a decline in the prices for oil for a long time. Another source of deflation is technologically enabled innovations such as Artificial intelligence.

Cathie pointed out that the training costs for AI are steadily dropping at an annual rate of 40 to 70 percent. She predicts that in the next 5 to 10 years, AI will transform every sector, company, or industry. She went on to explain that when costs and prices decline, deflation will follow.

If businesses and consumers alike believe that prices will fall in the future, they will hold on to their money, waiting to buy goods and services in the future. This action will push down the rate at which money turns over and lead to deflation.

Elon Musk replies to this thread saying he doesn’t know about the long term, but we will see a strong inflationary pressure in the short term. There are other billionaires who side with Elon Musk, believing that inflation will soon hit the US economy. One of them is Ray Dalio, a legendary hedge fund manager.

Dalio told the editor-in-chief of Yahoo Finance that he is significantly concerned about inflation because the amount of money and credit that has to be produced and is budgeted is a significant increase.

Ray Dalio has always been outspoken about inflation; his voice was loudest in November 2021, when an inflation report showed that consumer prices have gone to the highest in over 30 years. In situations such as these, many people think they are getting richer because the value of their assets keeps rising, but they fail to notice how fast their purchasing power is being eroded.

To be successful, one must earn an amount that is at least equal to the amount that one spends. Tell us in the comments section which of these billionaires you think has the correct opinion about the country’s financial state.

Thanks for reading till the end. Comment what’s your opinion about this information “Elon Musk: America Is Entering A Terrifying Financial Crisis“.