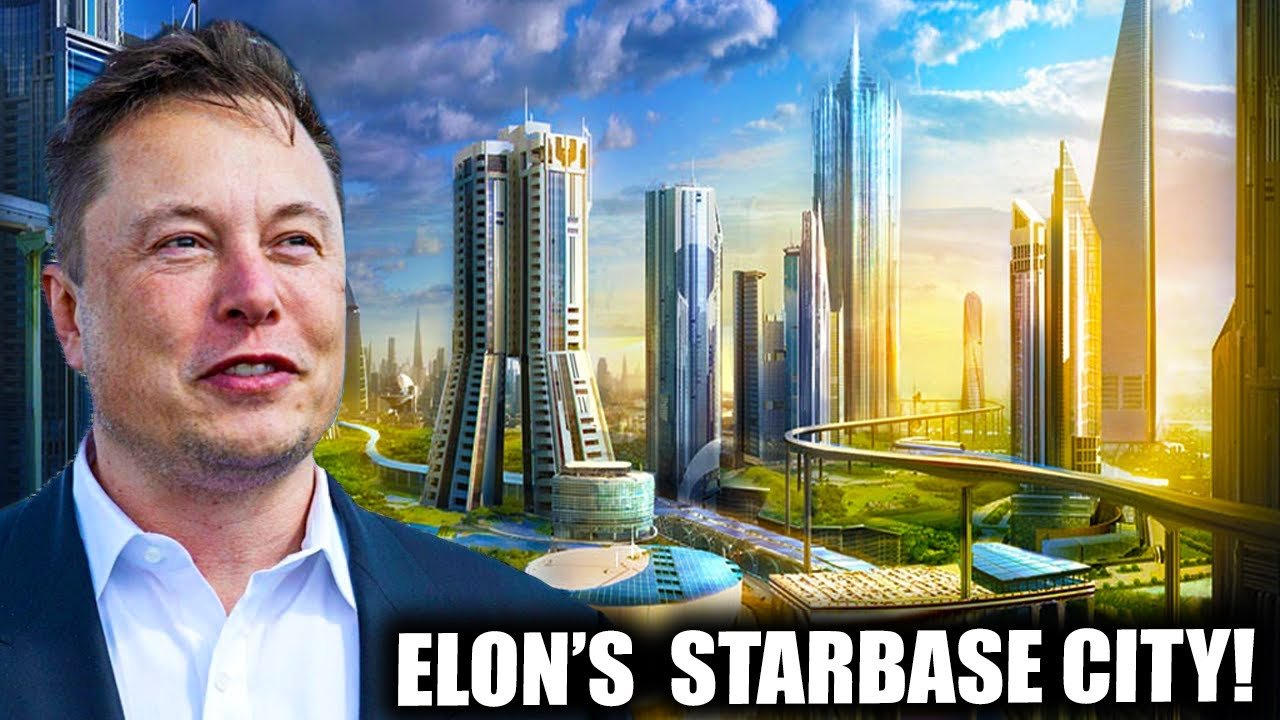 Elon Musk Unveils The Smart City of The Future: When it comes to innovative ideas that are out of this world, you can always expect Elon Musk to beat your expectations, and this time is no different.

Currently the CEO of SpaceX, Tesla Motors, and the president of SolarCity, and currently considered the richest man in the world, Elon Musk has a lot of achievements under his belt and now he wishes to add one more.

In March, last year, Elon Musk took to Twitter to announce that he planned to build a new city in Texas, “Creating the city of Starbase, Texas” Now while this may seem far-fetched, The Tesla CEO is not the first billionaire to be interested in building a city.

From Bill Gates, Marc Lore to Jeff Bezos, a couple of billionaires have developed a keen interest in building cities, and Elon Musk is no different. The city is set to include the SpaceX facility in Boca Chica along the Gulf Coast of Texas and expand from there.

Before SpaceX moved in, Boca Chica was practically a ghost with about 6 permanent residents and a few more tinkling a few times a year to escape cold winter. However, currently, SpaceX owns most of the land in Boca Chica, with the company having bought out the landowners a few years back.

At the moment, apart from a few holdouts, the village is mainly made up of SpaceX employees. Moreover, it seems that Elon Musk is quite determined and motivated to make his Starbase city dream a reality and has even gone as far as to inquire from Cameron county officials about what it would take to get his city up and running.

Presently the Starbase city may only exist in Elon Musk’s head, one could just imagine what kind of city this motivated and innovative entrepreneur can come up with. It makes you wonder what life would be like in this possible future city and what kind of technologies will be present. With all the great technologies that Musk is currently working on, we can expect his city to have.

Elon Musk has shown great interest in space travel and has committed to using his satellites to ferry people to mars by 2024.

The current spaceship he is building; Starship is expected to ferry more than 100 people to Mars. However, Musk’s most ambitious idea is using rockets for inter-city travel and he expects to bring this idea to life within 8-10 years.

Musk believes that the reason rocket travel is so expensive is that rockets are built to be disposable. However, with his new technology, Musk is building rockets that could be used multiple times.

This way rocket travel becomes cheaper and the possibility of commercial rocket travel comes closer to reality. Since Elon Musk has already hinted at the point that he intends to turn Boca Chica into a spaceport for ferrying people to Mars, we can naturally assume that Starbase city could possibly have a couple of commercial space travel ports in its future.

It could be the main way that people get into the city, or where people go if they want to go to Mars and possibly other planets. With the fast speeds that commercial rocket traveling can transport people, this could be an absolute game-changer.

Speaking of fast travel, another technology you definitely expect to find in Starbase city is the use of Hyperloops for transportation. Elon Musk first mentioned hyperloop transportation technology in 2012 describing it as a ‘fifth mode of transport.

Thus, it does seem like too much of a stretch to expect to see a hyperloop in Elon’s future city. These will provide transportation at speeds never seen before. Moreover, it is a technology that Musk has been dedicatedly to investing in, so you can expect to find hyperloop tracks in Starbase City.

Tunneling Can you imagine a city without traffic? Sounds magical right. Well, you would be happy to know that Elon Musk dreams of it too. It seems that we can expect Starbase city to be free from annoying traffic.

How is this possible? Well, tunnels. Now when you think of futuristic cities with cars, the first thought likely to pop up in your head is flying cars, just like in those futuristic movies. But it seems that this is the exact opposite of what Elon Musk wants for his city.

While Musk has claimed he has no problem with flying things, he feels that flying cars are impractical, would be too noisy, and produce too much wind. The fact is Elon Musk believes that the solution for the modern traffic problem lies underground.

Musk believes that tunnels are the future and considers them the best way to move people and even cargo from one place to another. And the best part is, according to Elon Musk, there are no limits to how many levels of tunnels one has underground. You can go as deep as you can to suit your purposes.

Furthermore, if you are worried about noise, the earth has always been good at absorbing noise, and you will no longer have to worry about your journey being delayed because of bad weather.

Thus tunneling could very well be the way that most future citizens of Starbase city get around. Expect to find a network of tunnels underground Starbase city to get people from one place to another.

This technology is a definite given when it comes to Elon Musk’s future great city. Self-driving technology and software are some of the biggest things Elon Musk is known for. Thus it would come as a big surprise if they were missing from his future city.

Personally, Musk has pointed out that he believes that most cars in the future should be self-driven since they are safer than those driven by humans.

Thus you can expect to find self-driven electric vehicles to be the main mode of transport in his future city. Not only will they be better for the environment, but they will also be safer for the drivers. Now the idea of Elon Musk building his own city right now may not seem like a crazy idea.

Elon Musk is innovative and motivated enough to make this dream a reality. I mean, just think of what he has accomplished so far. What we can guarantee, is, it will not be easy, as creating your own city does involve a lot of politics.

Nevertheless, Musk has never been one to back down from a challenge, and we do not see him starting now. Furthermore, with all the technologies that could be present in the city, we can confidently say we are excited to see Starbase come to life.

Thanks for reading till the end. Comment what’s your opinion about this information “Elon Musk Unveils The Smart City of The Future“.