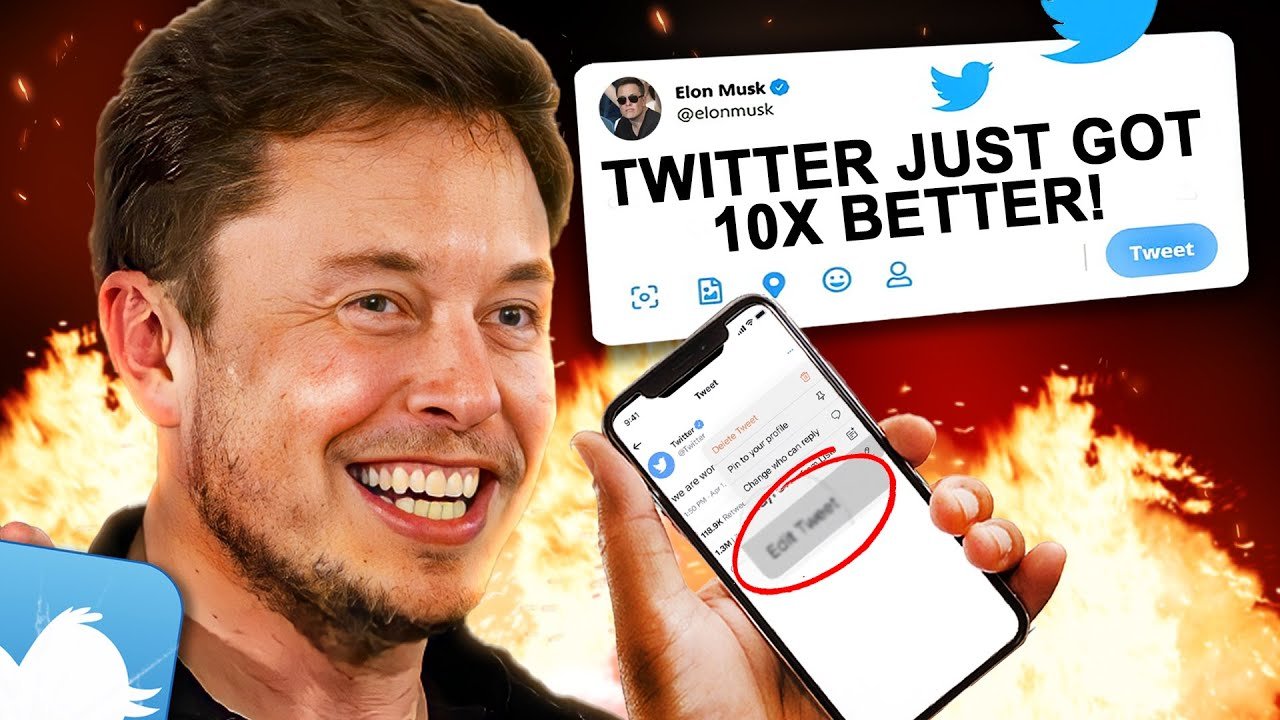 This change couldn’t have come at a better time because Twitter isn’t what it used to be.

Elon Musk wrote a letter to the Chairman of the Board on Twitter, stating his purpose and what he envisions for the platform. The content of this letter was his official move to privatize the microblogging platform.

Musk had already thought about these changes, and he wanted to effect them. The 9.1 percent stake he bought earlier didn’t give him enough voting power to change anything, and buying the entire company was the only option.

In his letter to Bret Taylor, he mentioned that he saw Twitter’s potential to be the platform for free speech around the globe. As a firm believer in free speech, he believed that Twitter would only get the transformation it needed as a private company. Musk made his offer on the 14th of April.

After many days of negotiations and an outright rejection of the deal by the board, the deal was finalized on the 25th of April, and the social media platform became private.

Before he bought his first stake in Twitter, Musk conducted a social media poll to establish the problems Twitter was facing. At that point, everyone thought he was just another concerned user.

No one knew he was on a fact-finding mission to identify the microblogging platform’s problems, so they could be addressed as soon as he took control. Musk’s move on Twitter is impressive, and it came as a shock to everyone.

It reflects his method of thinking that he has dubbed “First Principles Thinking.” This thinking style requires that you take things back to the fundamental level and start thinking up from there. It is an unorthodox style as opposed to reasoning by analogy.

When you do not think like everyone else in the room, you will definitely be taking steps and doing things at the best possible time. The genius tech billionaire couldn’t have chosen a better time to buy Twitter.

He is the appointed savior that has arrived at the appointed time to save us from the censorship of free speech. Musk is buying Twitter and bringing sorely needed changes as Twitter is on its last legs and dying breath. The billionaire has proven it.

World of statistics made a tweet listing the top 10 most followed accounts. Musk replied to that tweet, noting that most of the top accounts are no longer active on the platform and rarely post content anymore.

Musk has singled out celebrities like Justin Bieber and Taylor Swift, who haven’t for a long while. The other top accounts like the account of the former US President, Barack Obama, with more than 131 million followers, Indian Prime Minister Narendra Modi, with about 78 million followers, and soccer star Cristiano Ronaldo, with followers just shy of 100 million. Even our savior Elon Musk is very popular on Twitter, with 91.3 million followers.

It’s not easy to overhaul an entire social media platform; it’s a great deal of work. Yet, Musk is set to do it, and these changes are paying off. Twitter is only going from worse to better, but as the changes are happening, like a ripple effect, other things will happen.

Musk gained more than 5 million followers in less than a week as he began implementing these changes. He has highlighted the need for Twitter to change, given the rate at which it bans people from the platform.

Musk disagreed with the platform banning some news channels. He condemned the action in a tweet that reads, “Suspending the Twitter account of a major news organization for publishing a truthful story was obviously incredibly inappropriate.”

Jack Dorsey, the co-founder of Twitter, has been rooting for Musk to take the company private because he believes that Twitter has been taken captive by Wall Street. Dorsey revealed this in a tweet: “The idea and service is all that matters to me, and I will do whatever it takes to protect both.

Twitter as a company has always been my sole issue and my biggest regret. It has been owned by Wall Street and the ad model. Taking it back from Wall Street is the correct first step.”

After taking it back from Wall Street, someone Musk has done, the next step is to make the sorely needed changes. Dorsey believes that Elon Musk is the perfect man to implement the change that Twitter needs because he holds the solution to the problems faced by the platform.

In a tweet that reads, “In principle, I don’t believe anyone should own or run Twitter. It wants to be a public good at a protocol level, not a company. Solving for the problem of it being a company however, Elon is the singular solution I trust. I trust his mission to extend the light of consciousness.” he throws his back behind Elon Musk in full support.

Twitter has now gone private, but Jack Dorsey will be one of the crucial individuals working away from the spotlight to fix the problems. Given his experience, he has what it takes to make the platform better without any interference from a board limiting all the changes he was trying to make.

With Musk as the sole owner of Twitter, Jack is optimistic that these changes will be realized. In a tweet, he made this known: “Some things can be fixed immediately, and others require rethinking and reimplementing the entire system.

It is important to me that we get critical feedback in all of its forms, but also important that we get the space and time to address it. All of that should be done publicly.”

What Are These Changes

If you have been tired of Twitter as a platform and have been looking for other microblogging sites without so many restrictions, you should end your search because Twitter has been better than ever since it first launched with these new changes.

Users of the microblogging platform are excited as Musk introduces an edit button on the platform. This makes it possible to correct typing mistakes or grammatical errors. The sweet deal is that the edit button will only be available a few minutes after making your tweet.

This limits people from making changes to a post that has already gone viral. Also, users will be able to identify messages that have been edited. The edit function has been the most sought-after feature on the platform. It was long delayed until Elon Musk introduced it.

In November of last year, Twitter’s management introduced the edit button through their premium service called Twitter Blue. However, Musk will now be extending that feature to ordinary users.

Musk introduced the feature after conducting a simple online poll with a tweet. More than 4.4 million users participated in the poll, with over 70 percent agreeing to have the edit button. Here’s something you didn’t notice.

Musk misspelled the word yes in the poll, writing it as “yse.” This was his way of pointing out the need for an edit feature.

Another change Musk is bringing to the microblogging site is his fight with the spambots that are now so common on the platform.b Musk promised to fight the spambots in a tweet, “If our Twitter bid succeeds, we will defeat the spambots or die trying!”

Spambots are automated accounts on Twitter that mimic human beings. They can send out tweets, follow other users, and like and retweet content posted by others. But spambots use these seemingly ordinary actions to engage in deceptive, harmful, and annoying activities.

Spambots have been used in crypto scams in some cases, making Twitter less secure. Musk also wants to authenticate every human on the platform; this move would mean that people cannot randomly spread false information or engage in fraudulent activity using another identity.

This will build a lot of trust in the social media platform. The tech billionaire has also revealed that he would soon make Twitter’s algorithm open source. Twitter users will now have access to the calculus that determines what appears in a person’s Twitter feed with an open-source algorithm.

Musk has deemed it necessary to make Twitter’s algorithm open source after conducting an online poll with a tweet that reads, “Twitter algorithm should be open source.”

Over 1.1 million people participated in the poll, and more than 82 percent agreed with Musk over making the algorithm accessible to the public. In the United States, conservatives are pleased with the move because they believe that Twitter’s algorithm favors the content of left-wing politicians.

As a firm believer in free speech, Musk is improving on content moderation. He believes that people should be allowed to say whatever they want to say even if the rest of the world doesn’t agree with them.

However, Musk is not an anarchist, and he believes that whatever anyone says must be within the confines of the law. He revealed this in a tweet that reads, “By “free speech,” I simply mean that which matches the law. I am against censorship that goes far beyond the law.

If people want less free speech, they will ask the government to pass laws to that effect. Therefore, going beyond the law is contrary to the will of the people.”

Musk also wants to keep Twitter politically neutral. He will also make sure that people paying for the premium service known as Twitter Blue wouldn’t have to endure advertisements. Ads are very annoying, and as we all know, they could ruin your time and experience on the platform.

Musk will also reduce the subscription to Twitter Blue from 3 dollars to 2 dollars per month, but the most exciting part of the deal is that Twitter users will have the opportunity to pay for the service using Dogecoin.

If you are worried about Twitter becoming a platform you have to pay for in the future, Musk has assured everyone in a tweet that reads, “Twitter will always be free for casual users, but maybe a slight cost for commercial/government users.”

Thanks for reading till the end. Comment what’s your opinion about this information “Elon Musk Revealed Insane New Twitter Feature – Real Microblogging“.