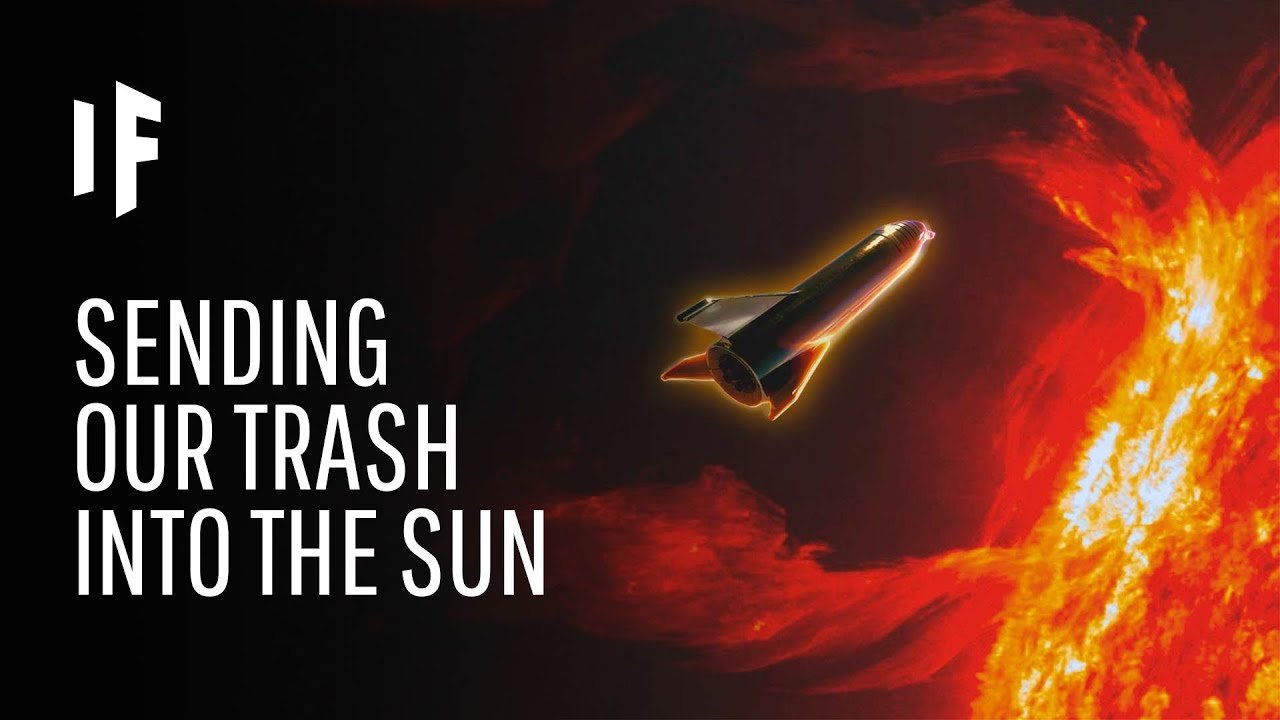 What if we send our Garbage in the Sun?: A giant ball of burning gas, which we call the Sun. With a surface temperature of 5500 ° C (9,940 ° F), here we can throw any type of waste, ranging from pesky plastics to nuclear waste. And everything we are starting in space these days, surely sending a little garbage to the sun will not be very difficult.

And why would it be easier to send a rocket out of our solar system than to receive anything from the Sun?

Our planet is filled with garbage. At the rate we are going, by 2050 it is 35,000 times the weight of the Empire State Building! It would be nice to put everything in big rockets and blast it off, but there would be some serious risks involved.

What would be the problem in sending rockets to the sun?

If a rocket were in the Earth’s atmosphere, there would be an accident and all our garbage and nuclear waste would come back down? The Sun is about 150 million km (93 million mi) away from Earth, so it would be extremely expensive to send any garbage there.

To put this in perspective, the Ariane 5, a modern European rocket with a payload capacity of 7000 kilograms (15,432 lb), costs about $ 200 million to launch in its orbit. So it would take 168 million of these rockets to get towards the sun to get all the waste of the planet, just to remove our waste for a year! The price tag will be $ 33 trillion. And this is just the cost of bringing the rocket into orbit around the Earth.

If we want to bring them from the Earth’s orbit to the Sun, it will require ten times more fuel! Okay, we get it. It will cost a lot of money, but this is the beginning of our problems. You see, the Earth moves around the Sun at a speed of 30 km / s (67,000 mph). Which is basically always sideways relative to the Sun.

If you were to launch a rocket directly from the Earth towards the Sun. It would not reduce that speed, and therefore it would have missed its target. The only way we will be able to send the rocket right into the sun is if we stop the speed by slowing the rocket to 30 km / s (67,000 mph).

How difficult will it be to send the rocket?

Okay, put it this way, if we could speed the rocket up to 12 km / s. There would be enough speed to get out of our solar system. It takes three times the hard work to get to the sun! For efficiency and fuel costs, it is better to go to the outer solar system, where the rocket will have lower speed, then use a little booster juice to adequately fire the engines which will cause the rocket and its waste load to fall into the sun.

Even if we were able to haul our garbage rockets straight to the sun. It probably wouldn’t be worth all the risk. Well, let’s say for starters that we got our first rocket, loaded with a bunch of nuclear waste, and as it was about to take off, it exploded on the launchpad. Now we’ve got some fun nuclear results to deal with. But perhaps we are a bit lucky, and the rocket launch itself is successful, but once it is in orbit.

The best case here is that we add a ton of debris to the already growing problem of space junk circling the Earth. The worst-case scenario is that our exploding rocket, filled with thousands of tons of domestic garbage and nuclear fuel. And comes back under us. Either way, it’s not good, and this whole operation doesn’t really seem worth it.

Maybe instead of you having to search for these external solutions. We should just, you know, stop producing so much waste. And see what happens if we start dumping it into volcanoes, but that’s a topic for another day.

Thanks for reading till the end. Comment what’s your opinion about this information “What if we send our Garbage in the Sun?”.

1 thought on “What if we send our Garbage in the Sun?”