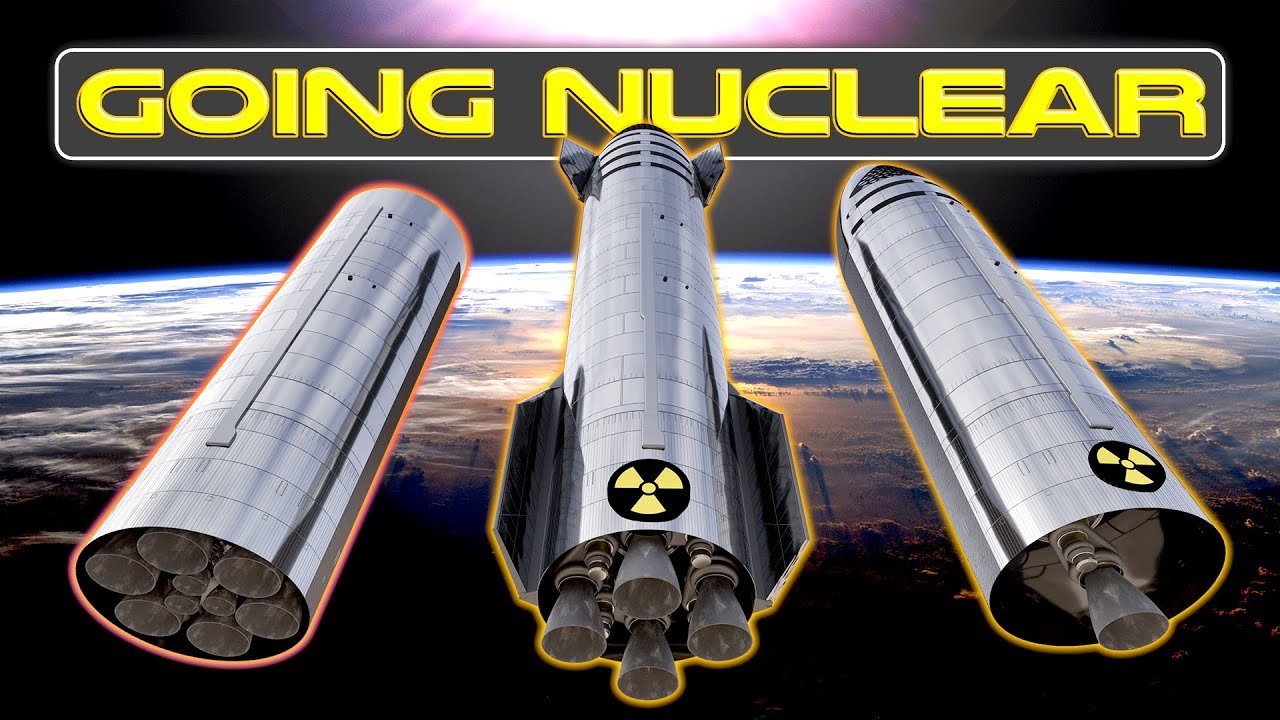 Will SpaceX Make Nuclear Rockets In The Future?: Do you know that The current combustion chamber method of powering a rocket requires up to 4000 metric tons of propellant to send a rocket from Earth to Mars? Compared to that, the nuclear method will only need about 500 metric tons to achieve the same feat. That’s a whole lot of energy and cost saved.

However, powering and using a nuclear rocket has a lot of drawbacks with dangerous radiations topping the chart. If the nuclear method is so efficient and paramount to the ultimate goal of making humans multi-planetary species, how will the dangers be managed or canceled out?

In fact, the first question should be, as viable as it sounds, will SpaceX even be allowed to make nuclear rockets at all? Plans to start regular space flights between Earth and Mars as envisioned by the aerospace industry are rather ambitious. Of course, it is a very difficult feat to achieve.

Many challenges stand in the way of NASA, SpaceX, and other hopeful Mars pioneers planning their missions. Among all such projects, the common barrier has been the vast amounts of propellant or fuel needed.

The earliest spacefaring rockets such as those used for the Apollo program 50 years ago made use of chemical propulsion; using liquid oxygen and hydrogen mixed together and burned in a combustion chamber.

Using such a system gave the astronauts operating them the ability to start and stop an engine quickly. Many new different kinds of space propulsion techniques have been conceived of or prototyped but none of them proved to be as reliable and easy to use as the old method of chemical propulsion.

NASA has several mission profiles for sending four or more astronauts safely into space but none of these are able to take them beyond the moon since the chemical propulsion system won’t cut it.

About 1,000 to 4,000 metric tons of propellant are used to send a rocket from Earth to Mars even when the two planets line up every 26 months. Currently, NASA’s SLS rocket and all of SpaceX’s current rocket designs carry a few hundred tons of fuel.

If anyone wants to get to Mars, they will have to find a different way of doing it. Experts have been recently discussing and researching the viability of using nuclear fuel for space launch rocket systems.

Conducted at the request of NASA, the National Academies of Sciences, Engineering, and Medicine have come together to assess it.

Their findings have not yet been made available for public discourse but what is known is that they discussed two types of nuclear propulsion systems; nuclear thermal propulsion (NTP) and nuclear electric propulsion (NEP).

Nuclear thermal propulsion involves a rocket engine in which a nuclear reactor works in place of a combustion chamber. The nuclear reactor still powers an ignition system that burns liquid hydrogen as fuel.

Nuclear electric propulsion on the other hand converts heat from a fission reactor to electrical power and then uses this energy to produce thrust through the acceleration of an ionized propellant.

The ionized propellant in this case is usually xenon. Both methods of nuclear propulsion require significantly less fuel than chemical propulsion, with less than 500 metric tons needed in the case of a flight to Mars.

Fuel consumption is also more consistent with the nature of the orbits of both Earth and Mars and the unique ways in which they mold potential launch opportunities.

Experts such as Bobby Braun, director for planetary science at the Jet Propulsion Laboratory and co-chair of the committee that undertook the research said quote: “We felt that it was unclear if such a program could get us there, but we did not conclude that it could not get us there.”

NASA and other space agencies across the world have not yet asked for nuclear propulsion technology funding from their respective governments and legislatures. Congress has appropriate money for the effort anyway in light of the speeding up of the US-China space war.

According to Braun, it would cost substantially more for NASA to work with the Department of Energy, SpaceX, and other parts of the US government to develop this technology and begin regular cargo flights to Mars in the mid-2030s.

This is where SpaceX enters the picture with their Starship concept spacecraft which is being designed with the eventual goal of flying missions to Mars. The project seeks to address the problem of needing huge amounts of chemical propellant but developing a low-cost reusable launch system.

SpaceX’s engineers are also well aware that it will take a lot of fuel for any spacecraft to reach Mars. They however believe that the problem is solvable if Starship can be built to fly often and for relatively little money.

Concepts include launching a Starship to orbit with empty tanks and transfer fuel launched by other Starships in low-Earth orbit before reaching Mars. On the other hand, Elon Musk has floated the idea of SpaceX in 2019.

He highlighted how the alternative to rocket fuel could unlock faster travel times around the solar system, a keen area of interest for the Starship project. “To be clear: good for in-space transit, but not recommended for Earth to orbit,” Musk stated on Twitter.

He was elaborating on his defense of nuclear reactors being used on spacecraft to propel them amidst statements from others concerned about the possibility of radiation affecting astronauts and the Earth’s atmosphere.

It seems as though SpaceX’s ambitious plans may indeed require the development and use of nuclear propulsion technologies for their spacecraft. As of August 2021, SpaceX is on the fast track to developing their Starship prototypes as intended without any mention or move towards incorporating nuclear propulsion into the design.

Given SpaceX’s close association with NASA and the rich history of cooperation between themselves, it could be foreseeable that SpaceX will eventually enlist the help of NASA in building a nuclear propulsion system for the Starship or other spacecraft designs.

This brings is to the main barrier holding back SpaceX and NASA in the development of nuclear propulsion technologies. While shorter mission lengths would limit the exposure of the crew to space radiation, there is still great concern regarding the radiation emitted from the nuclear reactor inside the spacecraft during the long journey to Mars.

NASA engineers have stated that reactor radiation would be mitigated through the design of the rocket with the presence of liquid propellants stored between the engine and the crew area blocking out radioactive particles. Its efficacy as a radiation shield is said to be very good.

They have also envisioned designs in which the distance between the crew and the reactor is made as large as possible, at opposite ends. As for the protection of the Earth and life within it, the spacecraft would not lift off directly from Earth with its nuclear-powered engine.

A regular chemical propulsion rocket would put the spacecraft into orbit first and then fire up its nuclear reactor. It remains to be seen what the engineers want to do about the possibility of disaster striking resulting in the destruction of the reactor into pieces.

An atmospheric or orbital rocket failure could result in the dispersal of radioactive material into the environment. A collision with orbital debris, material failure due to uncontrolled fission, material imperfections or fatigue, or human design flaws could cause a containment breach of the fissile material.

Such a catastrophic failure while in flight could release radioactive material over the Earth in a wide and unpredictable area.

Nuclear-powered rockets will be the key to opening up the solar system to humanity in future decades but with all these possibilities for disaster and danger, it will be at least two decades before they are used widely.

Numerous demonstrations and tests would need to be carried out before a crew is sent to Mars in a nuclear-propelled rocket.

Thanks for reading till the end. Comment what’s your opinion about this information “Will SpaceX Make Nuclear Rockets In The Future?”.

4 thoughts on “Will SpaceX Make Nuclear Rockets In The Future?”