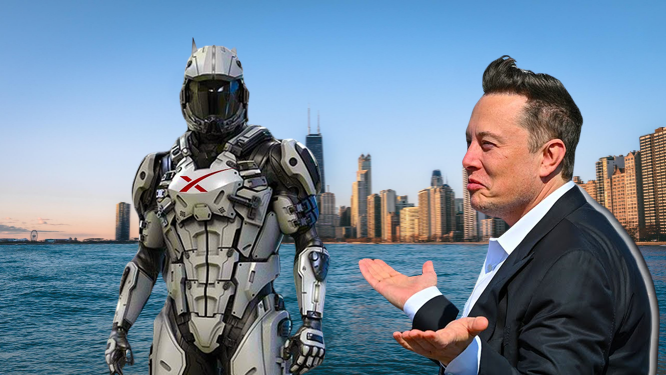 SpaceX Embarrassed NASA With Their High Tech SpaceSuit: Whether it’s science fiction or science fact with space as the backdrop, there is one thing that always catches the eye; the spacesuit. Indeed, we’re all familiar with the sense of excitement and inspiration when we see astronauts decked out in advanced spacesuits.

But before we go any further, let’s first set down what space suits really are. A spacesuit, sometimes known as EMU, an acronym for Extravehicular Mobility Unit, is a garment worn by astronauts to keep them alive in the harsh environment of outer space, which includes vacuum and temperature extremes.

Spacesuits are frequently worn within spacecraft as a safety measure in the event of cabin pressure loss, and they are required for extravehicular activity (EVA), which is work performed outside of the spaceship.

For such tasks, space suits have been worn in Earth orbit, on the Moon’s surface, and on the way back to Earth from the Moon.

Modern space suits add a complicated set of technology and environmental systems to the basic pressure garment to keep the user comfortable and reduce the effort necessary to bend the limbs while fighting the natural inclination of a soft pressure garment to stiffen against the vacuum.

IVA suits are lighter and more comfortable since they are designed to be worn within a pressurized spaceship. The Gemini G4C suit is an example of an IEVA suit that can be used both inside and outside the spacecraft.

They offer enhanced protection from space’s severe conditions, such as micrometeoroids and dramatic temperature changes. Outside ships, EVA suits like the EMU are used for planetary exploration or spacewalks.

There are clearly various models and designs of spacesuits, but they were mostly different variations of the same old design. SpaceX’s suit, however, changes things up significantly. Currently, the spacesuits used by astronauts at the International Space Station (ISS) are rather ancient.

SpaceX began constructing a spacesuit for astronauts to wear inside the Dragon 2 space vehicle in February 2015. Jose Fernandez, a Hollywood costume designer known for his work on superhero and science fiction films, and Elon Musk, the creator and CEO of SpaceX, collaborated on its look.

The suit’s initial photographs were released in September 2017. During the Falcon Heavy’s first flight in February 2018, a mannequin named “Starman” (after David Bowie’s song of the same name) wore the SpaceX spacesuit.

The suit was not pressurized and had no sensors when it was unveiled at the expo. Through a single tether at the astronaut’s thigh that feeds air and electronic connections, the suit, which is vacuum-compatible, protects against cabin depressurization.

Microphones and speakers are included in the 3D-printed helmets. The suits are not utilized for extravehicular activities since they require a tether connection and do not provide radiation protection. In order to familiarize themselves with the spacesuit, NASA commercial crew members Bob Behnken and Doug Hurley tested it aboard the Dragon 2 spacecraft in 2018.

They wore it in the Crew Dragon Demo-2 flight launched on 30 May 2020. The suit is worn by astronauts involved in Commercial Crew Program missions involving SpaceX. The gloves are touchscreen-sensitive, and the helmets are 3D-printed.

However, their principal function remains the same: to protect crew members against depressurization, which occurs when the capsule loses air. The suits also guarantee that astronauts have enough oxygen and maintain a comfortable temperature.

A single “umbilical” wire in the seat hooks into the suit and provides a communications link and breathable air. The spacesuits already beat any of NASA’s own design but, be that as it may, we do need to look at the competition SpaceX has.

We don’t need to look any further than Boeing, the same venerable company that has been fighting SpaceX for the right to launch NASA’s missions. It has designed a pressure suit to protect passengers through the critical periods of launch and re-entry for the contract with NASA to transport humans to the space station in its CST-100 Starliner spacecraft.

The Boeing Blue suits are around 40% lighter and more flexible than previous generations of spacesuits worn by American astronauts. To keep astronauts cool, they have many inside layers.

Touchscreen-sensitive gloves are also included in the outfit, allowing astronauts to use tablets in space. The soft, hood-like helmet has a broad polycarbonate visor to improve peripheral vision for Starliner passengers on their journey to and from space.

Astronauts will be able to change from sitting to standing more easily thanks to zips in the torso area. NASA released a close-up look at two next-generation suits for the agency’s Artemis program in October 2019.

The Exploration Extravehicular Mobility Unit suit is also known as the xEMU, on the other hand, is meant to be worn on the Moon’s surface. It’s a lot bigger than the pressure suits that astronauts wear inside spaceships.

This is due to the fact that it must protect the user from temperature fluctuations outside the spacecraft’s walls. It’s also intended to give some protection from micrometeorites and other tiny space debris.

The Russian Orlan type, which was introduced in December 1977, is one of them. The Orlan spacesuit is a one-piece design. The spacewalker may crawl into the “backpack” by opening it like a refrigerator door.

The other suit used in the space station is Nasa’s Extravehicular Mobility Suit (EMU), which was introduced in 1981. Unlike the Orlan, the EMU is made up of two halves: a bottom half and a top half.

Outside in the vacuum of space, the semi-rigid suit offers roughly 8.5 hours of life support for its occupant. The EMU was also the name of the suit used by Apollo astronauts on the Moon. However, it differed from the present version.

It was the culmination of years of work. Since the first spacewalk by the late cosmonaut Alexei Leonov in March 1965, spacesuits have come a long way, and it’s this line of research and innovation to which SpaceX’s Starman suit is an heir.

We wish more data was available regarding the suit, but it seems SpaceX wants to keep it a trade secret due to the Chinese advancements and intention to directly challenge the USA in an all-new space race.

As evidenced by the fact that established industry players are still stuck in the cold war era spacesuit technology, we can tell that SpaceX has had quite the effort on its hands.

The suits were being developed for usage in microgravity as well as planetary EVAs. Ultimately though, it seems NASA wasn’t confident enough to finally roll it out for spaceflights, and that’s a challenge SpaceX will need to overcome quite soon.

Only then can we say whether or not they truly managed to make a difference yet again. Our comment section is open, tell us what you think about SpaceX’s efforts in making the most advanced space suit known by humans.

What Are Space Suits?

A spacesuit, sometimes known as EMU, an acronym for Extravehicular Mobility Unit, is a garment worn by astronauts to keep them alive in the harsh environment of outer space.

What Modern Space Suits Have?

Modern space suits add a complicated set of technology and environmental systems to the basic pressure garment to keep the user comfortable and reduce the effort necessary to bend the limbs while fighting the natural inclination of a soft pressure garment to stiffen against the vacuum.

Thanks for reading till the end. Comment what’s your opinion about this information “SpaceX Embarrassed NASA With Their High Tech Space Suit”.

12 thoughts on “SpaceX Embarrassed NASA With Their High Tech SpaceSuit”