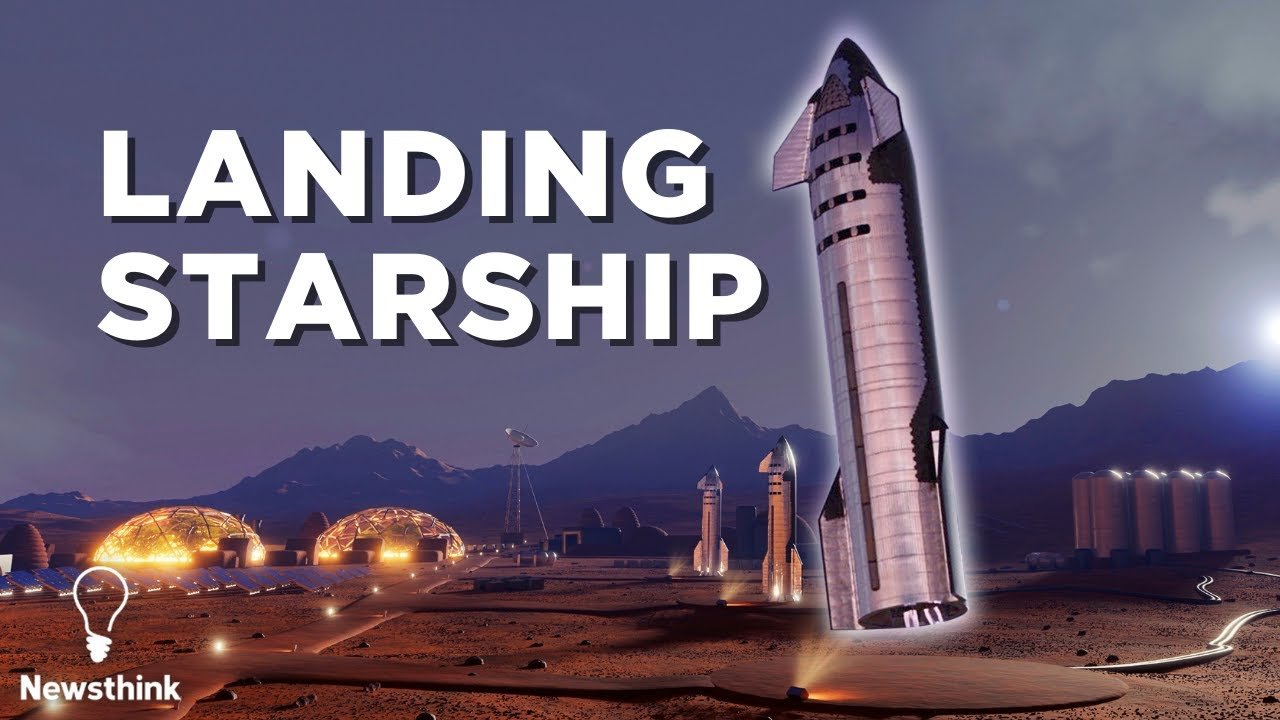 The Incredible Challenge of Landing Starship: To get an idea of how hard it is to land Starship, it’s difficult enough landing SpaceX’s much smaller rocket, the Falcon 9. As one of SpaceX’s commentators put it, landing the Falcon 9’s booster is similar to launching a pencil over the Empire State Building, putting it in reverse, and having it come back down and land successfully.

Or put another way, preparing the rocket for re-entry to land vertically is like trying to balance a broomstick on your hand in the middle of a windstorm which is clearly very hard to do.

Now take the difficulties of the Falcon 9 but multiply them and you get Starship. The largest rocket ever. As Starship prepares to send people to Mars and back, SpaceX has to figure out how to land this beast safely.

Starship enters Earth’s atmosphere in a rather odd way. It falls from the sky belly first after shutting off the engines. The belly flop helps decrease the velocity of the Starship.

The larger surface area increases air resistance to slow its fall. Kind of like how a skydiver maintains a horizontal body position with their arms and legs spread to control their freefall. The arms and legs of the Starship are its four flaps.

It then does a short flip to revert back to a vertical position and reignites its Raptor engines to get ready for landing. In the case of prototype number 8, the vehicle came in way too fast and blew apart when it hit the ground.

SpaceX had more luck with later versions. So, why doesn’t this thing just land vertically like the booster of the Falcon 9?

Landing the Falcon 9 booster is easier because it doesn’t go into orbit. It lifts the upper stage into orbit, before returning to Earth within minutes from a relatively lower altitude. So it never achieves super-high speeds.

Whereas Starship goes into orbit and travels much faster than the Falcon 9’s booster. SpaceX’s biggest hopes and dreams rest on this spacecraft sending 100 people or 100 tonnes to Mars.

This is how the trip would be made: Starship is lifted into orbit by the Super Heavy booster, which then comes back to Earth. It meets up with another Starship configured as a tanker in order to refuel in Earth’s orbit before making the long journey to the red planet. It could also fly to the moon in a similar manner.

The booster isn’t required for the return since there’s no deep gravity well to escape from on Mars. Starship flies solo, fueled by locally produced methane. Every step is a feat in itself. But one of the most difficult is landing heavy payloads on the surface of Mars. It’s really, really, really hard to do.

Only about half of all missions to Mars have worked out. The ones that failed either missed the planet altogether, crash-landed, or their signal was cut. It’s much harder to land on Mars than on Earth where our atmosphere allows the spacecraft to glide gently down to the surface.

There won’t be anything like that on the red planet – the atmosphere is too thin. 100 times thinner than Earth’s. So it won’t be able to slow the vehicle down. Starship will plummet toward the surface of Mars at 7.5 km per second or 4 and a half miles a second.

The heat shield will protect the Starship from melting during atmospheric entry. It’s made up of impressive hexagonal tiles and is designed for multiple entries.

Tests have shown these hex tiles can withstand temperatures of 2500 degrees Fahrenheit or about 1400 degrees Celsius. Because Starship is coming in so hot there will be wear and tear just like the brake pads of a car.

And, by the way, while this is happening, there’s a communication blackout. Those on Earth won’t be able to talk to Starship because of the long time delay due to distance – anywhere from 5 to 20 minutes – so scientists can’t send commands in real-time.

Instead, Starship will be pre-programmed with a set of actions. It’ll be a flying robot that must rely on its computers to land. We’ve imagined what Starship’s landing legs might look like as SpaceX engineers continue to refine their design.

We know they will be retractable – tucked into the rocket to minimize air resistance – and then spread out to maximize stability for landing. Musk has said the legs will be automatically leveled to handle the uneven, rocky terrain.

They will also have to be tough enough to withstand pummelling by massive dust storms and radiation. We’ve removed the dust from this particular shot so you can get a better look at the legs. They may not be needed to land back on Earth, however.

SpaceX has the idea of catching Starship using the launch tower with a grabbing arm called Mechazilla – likely in reference to the villain Mechagodzilla that confronts Godzilla in the film franchise.

Dutch animator Tijn imagined what catching Starship might look like, before stacking it together with the Super Heavy booster to get it ready for another flight.

This still untested strategy would significantly reduce the turnaround time for launches. And time is of the essence – especially if you’re Elon Musk and your dream is to build a city on Mars with a fleet of 1,000 ships.

Before ever taking off on this perilous journey with people aboard, Starship will fly uncrewed many, many times – perfecting launching and landing. The real success will be determined if and when launches and landings become as common as a plane ride.

Behind this vision of the future are incredible engineers who are solving the problems needed to make the Mars dream a reality.

Thanks for reading till the end. Comment what’s your opinion about this information “The Incredible Challenge of Landing Starship”.

3 thoughts on “The Incredible Challenge of Landing Starship”