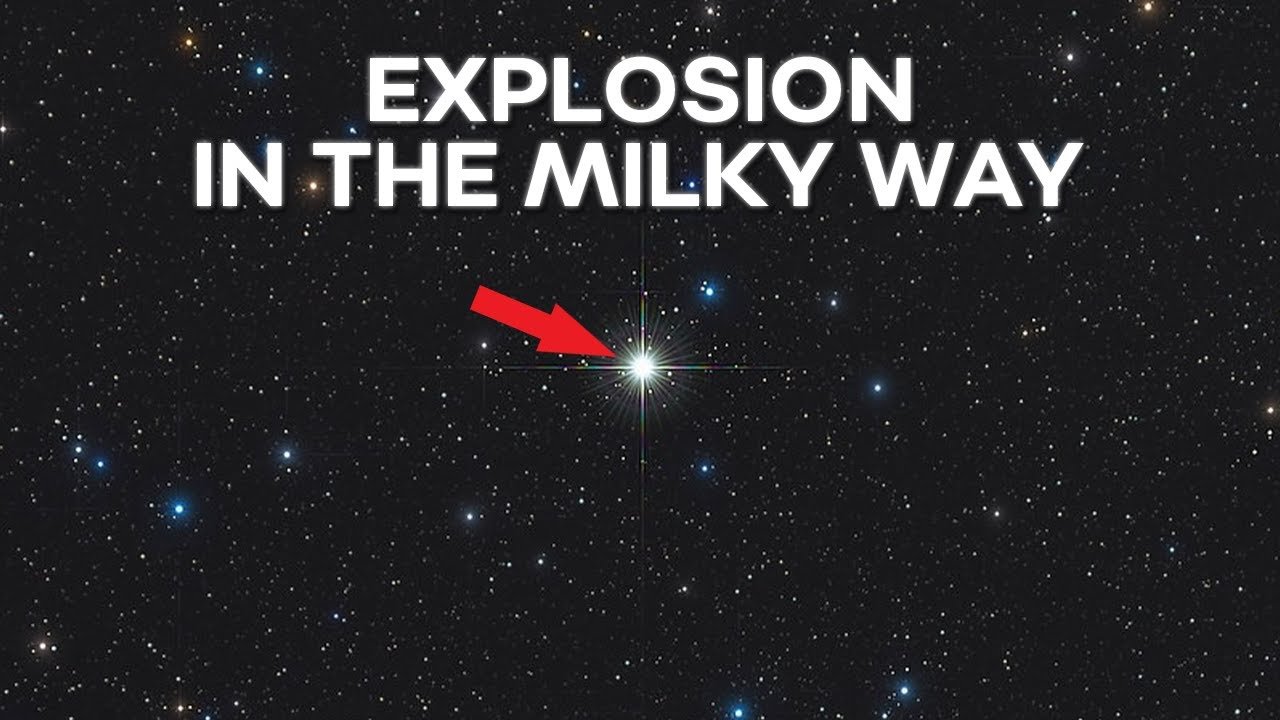 A Rare Nova RS Ophiuchi Just Exploded and It’s Visible To The Naked Eye: On August 8, 2021, the star RS Ophiuchi burst into view in Earth’s sky as what astronomers call a nova. The recent this is so special, as noted in the intro is that this nova that was born was one that you could actually see from Earth without the help of various devices.

So you wouldn’t have needed a telescope or a satellite to go and witness this, if you were on the right spot on Earth, you could just go and see it! In a dark sky, you can see it shining in the constellation Ophiuchus the Serpent Bearer. if you don’t know what that is…we recommend you look it up so that you can try and see this nova.

Just as important though was this wasn’t a “blink and you’ll miss it moment“. Rather, this is something to where the star is honestly increasing in its brightness over time! This means that it’s actually gaining strength and power the longer it’s in this form.

RS Oph normally shines at around a magnitude of 12. It’s usually much too dim to see with the eye or even most backyard telescopes. But when it went nova, the explosion caused the brightness of the star to increase in a way that honestly no one saw coming, which is why this is such a special thing.

Or at least, special in certain ways given what we know about it. Because trust us when we say that RS Ophiuchi is much more than meets the eye. We say that because RS Ophiuchi is one star in a very special system. That system is a “recurrent nova system“.

What does that mean? Put simply, it means that this is a system of stars that has novas happen somewhat regularly. RS Oph is part of a two-star system. One is a white dwarf, a highly compact, evolved star. The other is a red giant. This is very important for multiple reasons.

Not the least of which is that due to the proximity of these two stars, the white dwarf star is constantly going and pulling in stuff from the red giant. Which isn’t a bad thing per se, but when it pulls in “too much” from that red giant? BOOM!

A thermonuclear explosion happens and a nova is a result. Much like we had here early on in August. Now, as for the “frequency” of the explosions for this particular star, it honestly depends.

The two stars orbit one another and thus this really is a cycle of things going on overtime. In the case of RS Ophiuchi, it also exploded back in 2006, and there have been other nova explosions recorded going back over 125 years! So yeah, these things really do go and happen a lot.

This brings us back to the system itself, because while there are plenty of systems out there in the galaxy and universe that have nova explosions happen…they’re not meant to happen frequently, or at regular intervals. RS Ophiuchi and its system are truly rare in that you can almost time how long it’ll take before a new nova explosion happens.

So thus, by the clock we can now go on, that would mean that the white dwarf start will likely explode again in 2036, a while away for sure, but many people will get to see the nova happen then much like we got to do now.

You might be wanting to go and see this nova star for yourself now. But as we alluded to earlier, you might not exactly know where it is, so we’re here to help you with that.

The constellation Ophiuchus is currently in the south after sunset. It is located above the better-known constellation Sagittarius and its familiar teapot star, close to the horizon. If you look above the spout of the teapot and cross the swarm of clouds of the Milky Way, you’ll come across the region of the sky where RS Oph is located.

And if for some reason you aren’t able to find it, there are plenty of people who were able to take pictures of it from when they were observing it in the sky. Here are the tweets from a few happy stargazers who happened to catch a glimpse of it:

So as you can see, there were a lot of people paying attention to this very special explosion because it’s not something that happens every day. And it’s fair to say that those who were able to see it and study it are very happy because who knows when something like this will be able to happen again?

Let’s go back to the process behind the nova for a bit because there’s still a bit to talk about in terms of the hows and the whys and such.

For example, “if it explodes…how can it explode again?” A good question, and one that speaks to the nature of the white dwarf star itself. You see, stars have limits in terms of what they can handle in terms of heat, pressure, and of course, mass.

The nova is caused (as talked about before) when it absorbs so much mass from its neighboring red giant star that it has to explode. But when it explodes, what it’s doing isn’t detonating itself into oblivion like you’re thinking about in terms of a ‘regular explosion’.

But rather, it’s an explosion of mass in that it’s expelling all the built-up mass that it has within it. Think of it like a geysers. Geysers of water are one that go and release the “pressure” it’s under by expelling it and the water that is contained within.

“Old Faithful” as it’s known is honestly on a cycle because of how much pressure is built up within a specific amount of time, and it’s the same thing with this star here. It’ll go and explode out all the excess mass it has, and thus become brighter in the process until it finally dies down.

And to be clear, one of the reasons we can see this expulsion of mass is because it’s being sent out of the star at about 2,600 kilometers per second. That’s a REALLY fast moving set of mass.

The Fermi Gamma Ray Telescope also detected a gamma-ray source at the time and location of the nova, confirming that an outburst was indeed taking place. Further proof that people have been watching this system for a while and couldn’t help but notice what was going on.

Now, there is a catch to this explosion if you will. While it’s been able to do this kind of “pressure release” over time, there is a limit to what it can hold in the overall. This is known as the Chandrasekhar limit. And if that limit should be surpassed, the star will explode in a “critical mass” kind of way and not go nova…but go supernova.

And for those who know what that means, you understand why it’s a big deal. For those who don’t know, it means that the star won’t just go and expulse its built up mass, it’ll actually explode with the power of a star that’ll wipe out everything in its path.

And then it won’t have to worry about its “cycle” anymore because the red giant star will be quite gone. These are the most powerful stars ever witnessed (from a distance at least) by man, and many are wondering just when it’ll happen for this star.

At present, it doesn’t seem to be something to worry about. But obviously, that could change over time. And when that happens, the “recurring nova system” will indeed change, even if we don’t know how much it’ll change at present.

Supernovas as a whole are something that scientists try and study when they can for the simple reason that…they don’t happen that often. Which is saying something when you’re talking about the known and unknown that we’re constantly watching, reading and studying.

Granted, most astronomers agree that supernovas sometimes happen in the hundreds per year, but that doesn’t mean we get to see them, and they have to be in certain galaxies like the Milky Way. But by studying them, we can go and examine things like distance in space (which is not as easy to measure as some would state) and the effects they have on their surroundings.

The other part here is that when a supernova happens, the “building blocks” of new stars, as well as a slew of other elements, are put into space by the dying star and the other entities around it.

Scientists like to observe this to see just what space as a whole gets after these key moments. So should this happen to RS Ophiuchus, not only will we be able to see it due to where it stands in our sky, we’ll be able to research it quite heavily.

But again, we honestly don’t know when it’ll go supernova, or if it’ll go supernova at all. So thus…we wait. Speaking of RS Ophiuchus, one of the things that can’t be ignored here is that there are potentially new things to learn about this nova now that was able to be done in 2006.

After all, that’s 15 years of technology, probes, satellites and more that have gone up and have been getting better in their photo capturing, data collecting, and more. It’s entirely possible that as scientists try and observe the star for as long as it’s visible that they’ll be able to get new data that’ll help us under the star, its system, and more.

Is that a guarantee? No, of course not, few things in space are guaranteed, that’s just how it works. But it’s the potential for discovery that honestly keeps people going even when it doesn’t seem like there’s nothing to be discovered.

And with this new nova burst, you never know what might be found, or when the next one might happen for more research to be done. So if not now, then when?

Thanks for reading till the end. Comment what’s your opinion about this information “A Rare Nova RS Ophiuchi Just Exploded and It’s Visible To The Naked Eye”.