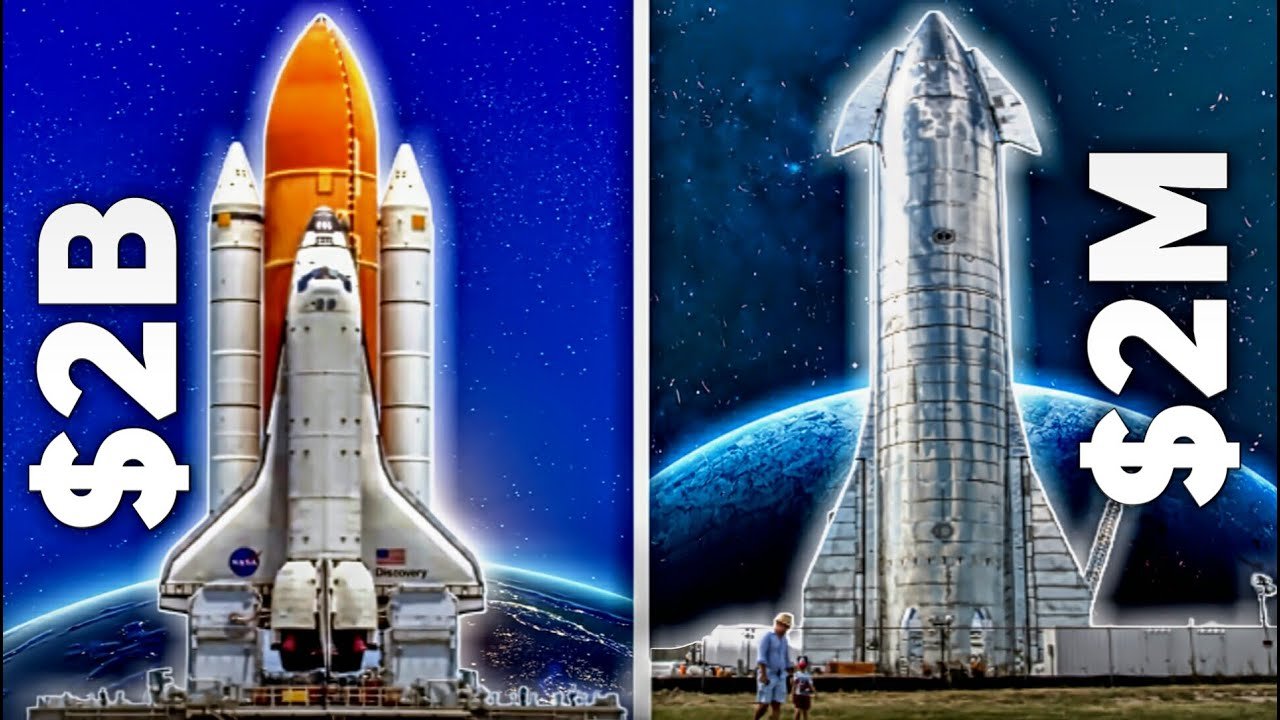 Why NASA Is Losing to SpaceX at innovation?: About 52 years ago, NASA took one giant leap for mankind – they have successfully landed a man on the moon. This time, Elon Musk, the CEO of SpaceX wasn’t even born yet. Fast forward to 2021, NASA sent people into space on the 27th of May.

However, at this time, the astronauts won’t be cruising to The International Space Station on a NASA rocket. They did it on SpaceX’s Dragon 2 capsule on a Falcon 9 rocket. This and other similar instances begs the question, how is SpaceX, a privately held company with barely 18 years of experience crushing a government-funded NASA with 62 years of experience and groundbreaking achievements under its belt in terms of innovation?

In today’s article, we’ll take a look at why the poor performance of NASA’s Space Shuttle, political games, and other uncontrollable factors have affected the innovativeness and effectiveness of the company and how it has helped SpaceX take over the interplanetary travel industry.

The cost per launch of the NASA space shuttle program was around 1.6 billion. It seems no one got the whole idea of how cumbersome that amount is until the SpaceX crew dragon which only cost roughly 209 million dollars per launch.

More so, Starship – a massive heavy-duty rocket – is undergoing steady tests by SpaceX with the hope of conveying people to not just the low orbit space but to other planets – a feat that has never been achieved before.

A part of that plan to handle not just the low-earth orbit is the fact that SpaceX is the several research payloads they are working on with an estimated cost as low as $62million and have been assigned with the task to design a Moon lander.

However, NASA on its own part has had to deal with a lot of political issues starting from being exerted control over by the President of the United States and the Congress, a reduction in their actual funding and total tax revenue received, and the need to get approval from budget centers before they can get funds.

The cost of flights on launches managed by SpaceX is like 2/3 the price its competitor, United Launch Alliance, sells a rocket. SpaceX has a flexible and expansive mindset gotten from Silicon Valley, a territory its CEO knows so well, with the determination to test its designs or concept with failures upon failures.

Therefore, Starship and Dragon 2 Capsule are two vehicles the private space company plans to launch into space. The Space Shuttle from NASA boosts a big payload capacity of 29,000kg and plays a lead role in the construction of the Space Station as it is the only rocket ship at that time that could carry many of its parts.

Starship has the Falcon heavy sit between it in terms of propulsive power which is to be launched in 2022 (the first of its kind) as part of the Pysche Mission and researchers state that these missions could bring about benefits as well as risks.

The increasing power of SpaceX has brought down the price of spaceflight via innovations such as durable fairings and stages that save NASA a lot of expenses.

The initial 3 flights of the Company’s Falcon 1 ended in a crash from 2006 to 2008 but plans to place massive science findings on the moon and planets and make all inventions and modeling as perfect as possible.

In 2010, SpaceX moved on to using a bigger Falcon 9 rocket, which has a viable heavy-lift rocket known as Starship that ought to transport the organization to the moon, then Mars whose launch has slipped repeatedly and is now slated to the last months in 2021.

Starship, a brass spaceship with a very heavy booster is 120m in height, soaring over the Saturn V that transported passengers to the moon, and has science designers craving.

The date for an inaugural flight of the spacecraft hasn’t been announced but SpaceX has engineered six prototypes within almost a month. The 9m diameter cargo of Starship can conveniently retain huge astronomical observatories such as the suggested Habitable Exoplanet that would mirror planets far away directly.

If the Starship is practicable, it could generate political pressure to waylay the Space Launch System. The Starship spaceship was put forth as SpaceX’s lander that can land on a booster developed by NASA or its own.

One of NASA’s deputy social administrators says, there would be enough room for researchers to straddle experiments such as a peer back, a radio telescope to the first period of cosmic formation from the far side of the moon.

Although, the private space company’s desire to go all out can also generate trouble for researchers. Starship’s lander is going to be increasingly heavy than the thin lunar chunk of the Apollo missions.

The rock and dust it creates could go into lunar orbit, generating an intruding haze for coming landers and intimidating satellites and outposts. SpaceX is looking over the likelihood of its rockets polluting sterile planets and night skies.

The big aim of the Company is to place a living matter on Mars which can infect it with terrestrial microorganisms that can confuse scientists.

In recent times, the space company stirred the interest of astronomers through the establishment of a plethora of Starlink Satellites that is purposed to produce fast Internet to remote locations. At ground level, the satellites look astonishingly bright due to their low orbits and they leave chaotic trails on survey telescopes’ cameras.

Complete reusability and prudent use of propellant will lessen the price of every Starship launch to $2m. Todd purports $10m on each flight may be very dependable. supplies and astronauts in April.

A few people bother that NASA’s traditional culture SpaceX was selected along with other private setups to fabricate lunar landers for safety could be jeopardized. Furthermore, the development of durable rockets is leading to a heavy increase in the cost of space transport which has given SpaceX an edge over other Space companies.

Coupled with that, transport costs have now been brought down with the aid of printing technology and mass production. SpaceX’s involvement in NASA’s launches has provided unanticipated cost reduction to them: their pre-astronaut price has lessened up to 7 times while the spaceship expenses have lessened to about $1.7b from $27.4b, according to data.

The partnership between SpaceX and NASA on their space mission is an unforgettable achievement because it brought back human launch potential to the US before the conclusion of the shuttle program and because it commemorated the first time a non-governmental organization will convey astronauts to space.

The unforgettable launch was pressed from Saturday till Sunday evening due to irregular sea movements that will not allow the spaceship to get to the renounced first stage of the Falcon 9 rocket.

It’s essential that NASA regain the booster as it will be employed for the crewed launch about to hold, slated for the 30th of March. NASA is engineering SLS (the Space Launch System), which is the most sturdy rocket and launch system ever developed that will convey a lasting presence to the moon with the same idea ISS has and is capable of transporting much bigger payloads.

The agency has also put down more than $3b in investment with SpaceX to build its Crew Dragon shuttle which is amongst its Economic Crew Program that started in 2010 and swore to build a new set of American Spacecraft and Rockets all from American Soil.

The Crew Dragon was built to convey astronauts to the World Space Station. It is a seven-seat concept and a capsule build like the Apollo missions. Since release, till a while before reentry, the shuttle (a.k.a capsule) is joined to a section known as the trunk that features solar panels, allowance for cargo, heat-expelling radiators, and fins to create balance during unexpected aborts.

When combined, the shuttle and trunk stand at about 26.7ft in height and 13ft in diameter. Crew Dragon is laced with sixteen Draco thrusters that direct the vehicle in space and all Draco’s are capable of generating 90 pounds in force while in space.

Besides, Crew Dragon is engineered to be “two-fault” tolerant (meaning that two missions can fail, such as a thruster and a flight computer, luckily the spaceship can return the crew safely at the end of the day).

If an emergency occurs on the pad or when climbing to orbit, the launch escape feature will engage to hoist the capsule and its pilots afar from the rocket. Parachutes are now released to bring down the crew members safely.

Crew Dragon’s Flight Computer employs algorithms that dictate how to trigger the thrusters in order to reach the target very effectively. Its lifetime in space is capped to some months due to its solar panels that wear out in this environment and its heat shield, found at the base has to withstand temperatures hotter than the Sun’s crust as the ship escapes into the atmosphere.

Identifying the source of frozen water is a crucial goal in celestial exploration because ice can be employed to create water for celestial astronauts, and thus it can be separated or dissociated into hydrogen and oxygen which can be used for air and rocket propelling respectively.

However, until Elon Musk’s SpaceX returns humans to the moon and puts the first people on Mars — NASA will likely hold out in people’s minds as the pre-eminent leader of space exploration, not only because it has launched missions with more in mind than money, but because — with spacecraft like the Voyagers 1 and 2 still active in interstellar space and many more since successfully exploring the inner and outer planets of our solar system — SpaceX simply hasn’t gone as far.

Thanks for reading till the end. Comment what’s your opinion about this information “Why NASA Is Losing to SpaceX at innovation?”.

6 thoughts on “Why NASA Is Losing to SpaceX at innovation?”