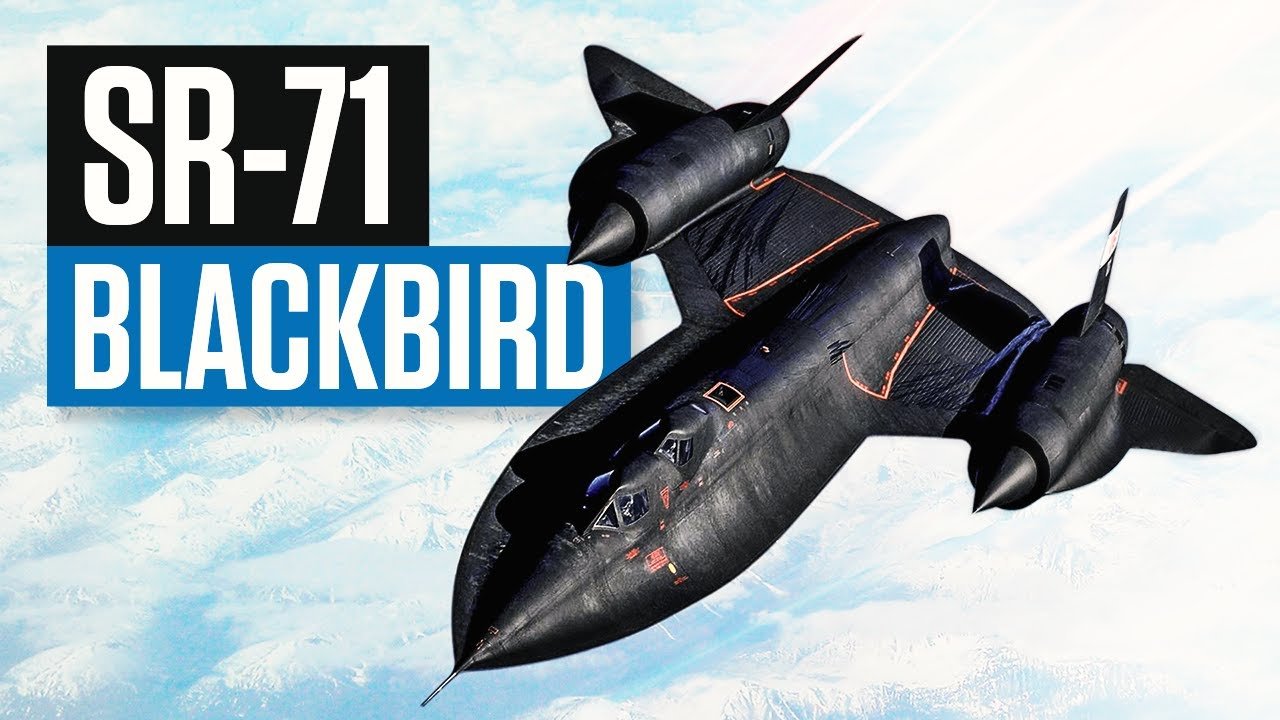 SR-71 Blackbird: The Fastest Plane In The World: Mention the world’s fastest airplane and many will think of the Concorde, and while that may have been a record-holding passenger jet, it was far from the fastest. Capable of over Mach 3, the Lockheed SR-71 “Blackbird” is the holder of this title.

Built for long ranges and high altitudes, this reconnaissance aircraft was developed and built by Lockheed – an American aerospace company. It found its use under both the United States Air Force and NASA.

The SR-71, introduced in the mid-1960s, was based on the formations that its predecessor left: the A-12. The A-12 was one of the first aircraft designed with its radar cross-section in mind, but more on that later.

The SR-71 was longer and heavier than the A-12, capable of longer distances thanks to a larger fuel tank. It was also designed to accommodate a pair of tandem cockpits.

A total of 32 SR-71s were built, each at the cost of around $33 million each, and while none were lost in enemy attacks, 12 were lost in accidents. Each of them was painted in a dark blue color to help release as much internal heat as possible, as well as to help the aircraft blend into the night sky – this is the origin of its nickname: the “Blackbird.”

Generally, titanium is avoided in the aerospace industry despite its benefits, which are far outweighed by its cost. It was generally only used in components exposed to high temperatures, such as parts of the engines and exhausts, as well as some edges of the wings.

The cost wasn’t so much a priority with the SR-71, which is why around 80-90% of its structure revolves around titanium, albeit an alloy that was both cheaper to produce and easy to work with thanks to its ability to soften at a lower temperature.

The rest of the aircraft was built from polymer composite materials. Interestingly, many of the surfaces were corrugated. While a smoother surface may be more aerodynamic, thus fuel-efficient, having a corrugated surface would mean that the plane’s ‘skin’ could expand both horizontally and vertically, making it better resistant to the extreme heat it would face.

That wasn’t the only strange thing about its design; the fuselage panels were not built to fit tight to the frame. On the ground, the SR-71 wore its skin rather loosely, but true alignment would happen as the airframe heated up when in action, often by several centimetres.

The fuel system was built in a similar way, which meant when stationary, the fuel tank would drip JP-7 fuel onto the ground. This, along with its incredible speed and power, led to the misconception that the “Blackbird” required refueling immediately after takeoff.

While it’s true that mid-flight refueling would be paramount to its long-distance success, this is mostly because, on a typical mission, it would take off with a partial fuel load to reduce stress on the brakes and tires.

Thanks to this, it was significantly lighter, allowing it to take off even if one engine were to fail. JP-7 fuel is difficult to ignite, which is why triethyl borane – or TEB – was injected to produce high enough temperatures for the fuel to ignite.

TEB gave the flame a characteristic green color. To demonstrate the dedication to its military purpose, cesium-based additives were used to help suppress the exhaust plumes’ visibility to radar.

Several studies into exotic fuels were conducted, including coal slurry and liquid hydrogen, but both were written off as being unfeasible. Its tires, manufactured by BF Goodrich, were constructed with aluminum built-in.

Filled with nitrogen, they would last around 20 missions, and cost almost $2,500. To reduce stress on landing, which would be around 200mph, the SR-71 deployed a parachute to increase the drag. Onto its source of power, and the “Blackbird” had plenty of it.

A pair of Pratt & Whitney J58 axial-flow turbojets produced a static thrust of 145kN, which for the time was an extraordinary amount of force.

They were so well-tuned for high speed that, to start each engine up, the US Air Force and NASA would rely on a pair of Buick Wildcat V8s mounted on a ‘start cart,’ spinning each jet to around 3,200rpm before it could self-sustain. Later, these were replaced by Chevrolet big-block V8s, which in turn were switched out for a quieter pneumatic system.

As outside air entering the engine through the air inlets, it would slow down to subsonic speeds. The plane itself would be traveling at around Mach 3.2 – almost 2,500mph – but was often proven to be more efficient at higher speeds, depending on the air temperature.

Specially developed suits were required to be worn by pilots, with a small opening for food via sachet, and drink via a straw.

If any ground-based systems were able to detect the SR-71 traveling at over three times the speed of sound, they would then have to tend to its 10 square-meter radar cross-section – about 10 times larger than that of an average human, or 10 times smaller than that of a large cargo aircraft.

Onboard, the “Blackbird” was equipped with optical and infrared imagery systems, a side-looking airborne radar, an electronic intelligence-gathering system, and defensive systems for countering missile and airborne fighters.

While early propositions considered fitting weaponry to the aircraft, they were later dismissed. Let’s remember, it was built as a reconnaissance aircraft, and it served its purpose very well without the need for any armament.

Given the opportunity, would you ever fly in an aircraft capable of traveling at 2,500mph (around nine times as fast as a Bugatti Chiron), or does the 500-or-so mph that the average passenger jet flies at a sound more appealing? Let us know in the comments below.

Thanks for reading till the end. Comment what’s your opinion about this information “SR-71 Blackbird: The Fastest Plane In The World”.

3 thoughts on “SR-71 Blackbird: The Fastest Plane In The World”