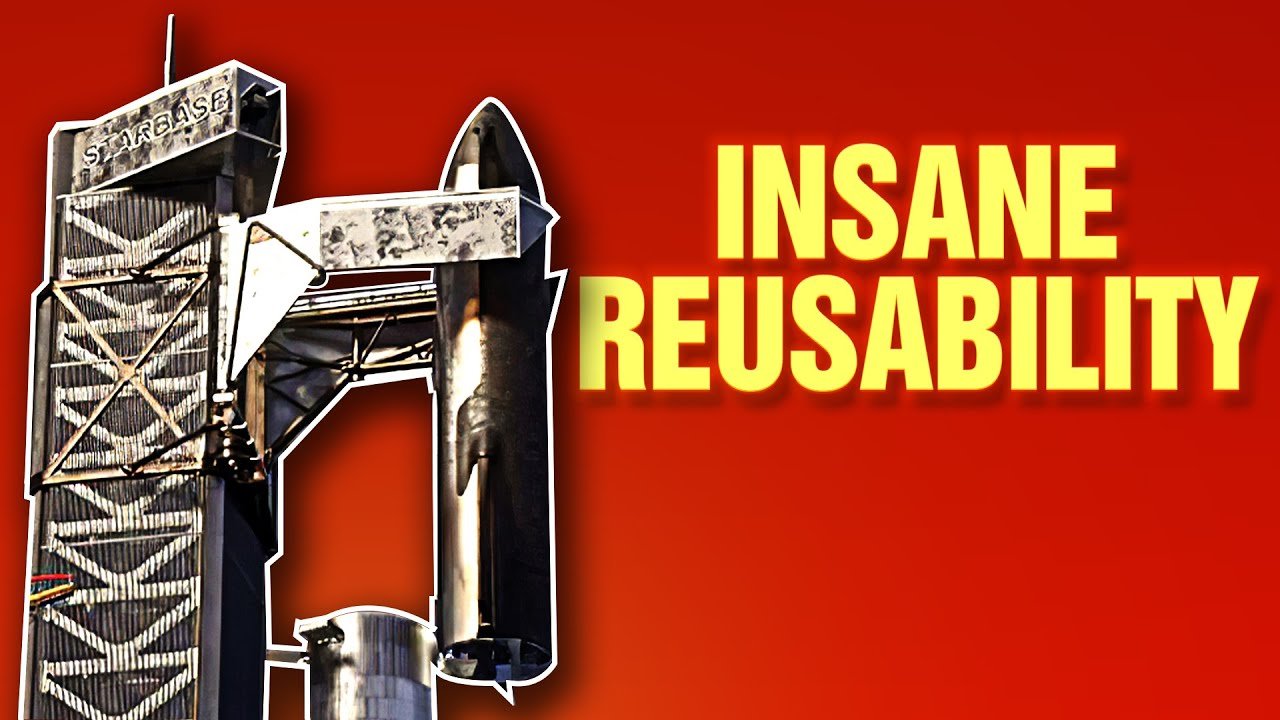 Mechazilla : Starship Catch & Turnaround within 1 hr: The most interesting thing about Mechazilla is not it’s flamboyant name but what Elon Musk & Spacex is trying to achieve with it – insane turnaround time of less than one hour for the starship reusable rockets. This has never been heard before in the history of space travel. Will he succeed? Well, we will find out in just a second.

In January of 2021, Elon Musk announced SpaceX’s latest plan to increase the number of flights they can mount by drastically reducing turnaround time. The key to this was a new launch tower that would “catch” first stage boosters after they return to Earth.

This would make unnecessary the need to install landing legs on the future Super Heavy booster and Starship prototypes intended to return to Earth after initial climb.

Musk made knowledge of this idea public in response to a post on Twitter made by an animator, who asked if his latest render of a Starship landing next to its launch tower was accurate. As usual, Musk responded via Twitter, saying quote: “We’re going to try to catch the Super Heavy Booster with the launch tower arm using grid fins to take the load.”

He further added: “Saves mass and cost of legs and enables immediate repositioning of booster on to launch mount – ready to refly in under an hour.”

The ground crews at SpaceX’s South Texas Launch Facility at Boca Chica recently finished stacking the nine sections of bolted steel that make up the tower, which now stands about 145 meters or 440 feet tall.

With this phase complete, the teams can now take the process of outfitting the tower with large actuator arms, hydraulic systems, fuel lines, and other components that will eventually build the arm to catch the Super Heavy, the arm that Musk calls “Mechazilla”.

His recent hit in his trend of similar names is a direct reference to the character called ‘Mechagodzilla’ who appeared in the Godzilla film franchise. Mechagodzilla is a robotic copy of Godzilla that engages in a duel with it in the film ‘Godzilla vs Mechagodzilla’ released in 1974.

The structure hasn’t been built yet so we have to rely on 3D models and animations produced by animators and artists. Indeed, the first to produce one was a 3D designer whose YouTube channel is named “Mini3D”.

He created an animation the very next day after Musk posted his description on Twitter. The latest animation comes from ‘Erc X’ who used the completed tower as the starting point for his latest animation.

The animation is captioned: “Mechazilla <1 Hour Turnaround,” and shows a fully-operational tower “catching” a spent Super Heavy booster and transferring it to launch stand.

The actuator arms then turn to grab onto another Starship and stack it onto the top of the Super Heavy. We also see a secondary arm move into place once the Starship and Super Heavy are stacked.

Musk let Erc X know how close he was to capturing the appearance of the tower: He wrote: “Pretty close. Boosters and arms will move faster. QD arm will be a steady booster for ship mate.” Musk is promising a turnaround time of less than one hour now and has confirmed that future Starships can be retrieved using this same apparatus and others like it.

This scenario is likely to occur if Starships begin taking passengers on point-to-point flights between major cities, a service that Musk has promised will be available once the Starship is cleared for commercial flights.

He was also asked if such a structure would ever be built on Mars and if Super Heavy boosters might be built there for missions to the outer Solar System. He said: “Yes on both counts. That would be a great outcome for civilization,” replied Musk.

This new area of focus in the development of the Starship and Super Heavy prototypes seems to be an area of focus in which Elon Musk is particularly interested. Indeed, he would have very good reason to be interested as the potential success of this project will lead to SpaceX having a decent chance of getting their projects finished earlier.

It marks a sharp departure from SpaceX’s other rocket reuse efforts. For the semi-reusable Falcon 9, the first-stage booster either returns to Earth on a land-based launchpad or an autonomous drone ship in the sea.

The rocket fires its engines during descent to come to a stop on the pad. If the tower can catch the rocket and move it back into position onto the launch pad, that could help SpaceX reuse rockets faster than ever.

The fastest turnaround time for a Falcon 9 booster from the previous flight to re-flight is 27 days. In March 2020, Musk said that he wanted Starship to be able to fly three times per day.

If Musk wants to build a city on Mars by 2050, he might come to depend on that rapid turnaround time. In 2019, he estimated that the city would require around one million tons of cargo to reach self-sufficient status.

If each ship carries 100 tons, that means SpaceX will need to make 10,000 flights over the next 30 years or around 333 per year. Of course, an unavoidable part of achieving this goal also involves ground crew members, engineers, scientists, production personnel all reaching their assigned goals and being able to finish their work successfully.

This is besides the need to gain launch approval from bodies such as the Federal Aviation Agency. If Elon Musk and his team can reduce turnaround times according to expectations and plans, Flights can go back and forth and each individual spacecraft may be used several times in a week.

There are a few challenges to be considered however. While the relatively simple swinging ‘QD arm’ that will fuel Starship and stabilize both stages of the rocket is a common feature of rockets and launch pads, the only experience SpaceX itself has with umbilical swing arms is the Crew Access Arm (CAA) that allows astronauts and cargo to board the Dragon spacecraft after Falcon 9 goes vertical as a structure.

Technically, the transporter/erectors (T/Es) that cradle Falcon rockets, lift them vertical, and fuel them before launch have some similarities with swing arms but SpaceX has always used simpler and more reliable passive mechanisms whenever possible.

Thus, SpaceX engineers have little precedent or workable example to build upon and take it to the next steps. They will have to develop it from scratch almost completely.

A step further, though, SpaceX has also seemingly foregone the installation of a basic crane on top of its Starship tower, and Musk himself has developed an almost infamous aversion to the inclusion of something as seemingly simple as landing legs on Super Heavy boosters and, eventually, perhaps even some Starship variants.

Instead of adding rudimentary legs to Super Heavy prototypes, Musk has seemingly pushed SpaceX to turn Starship’s launch tower into a complex, vulnerable, and fragile rocket recovery system. Beyond the comparatively mundane QD arm, Musk says that SpaceX will ultimately install a pair of massive house-sized steel arms mounted on a sort of external elevator.

Those arms will apparently be capable of actuating and moving up and down the tower with the speed, precision, and reliability needed to quite literally catch Super Heavy boosters and eventually Starships literally out of mid-air.

The team assigned to the designing and building of those rocket-catching arms have affectionately nicknamed them “chopsticks” which is a nod towards the kind of actuation they’ll need to recover the world’s largest rocket boosters and upper stages without missing or destroying them.

Having really only just perfected propulsive vertical landing with Falcon 9 and Falcon Heavy boosters, SpaceX thus intends to throw a few extra possibilities of failure into the mix. But hey, you won’t know if you’ll succeed if you don’t try, right?

To SpaceX and Musk’s credit, whether the company’s second attempt at catching rockets goes as well as the first, some version of the massive ‘chopstick’ arms SpaceX is working on was likely going to be necessary just to rapidly turn around boosters and Starships and do so regardless of weather conditions.

By replacing a tower crane with giant arms, SpaceX will hopefully be able to stack Starship on Super Heavy even in the high winds that are almost always present on the South Texas Gulf Coast.

If SpaceX can also reliably catch boosters with those arms, it could be a significant upgrade for the operations side of Starship reusability. For now, though, only time will tell.

So what do you think? Do you think it’s going to succeed? Or should SpaceX work their original plan out to full success first? Please let us know what you think in the comments below.

Thanks for reading till the end. Comment what’s your opinion about this information “Mechazilla : Starship Catch & Turnaround within 1 hr”.