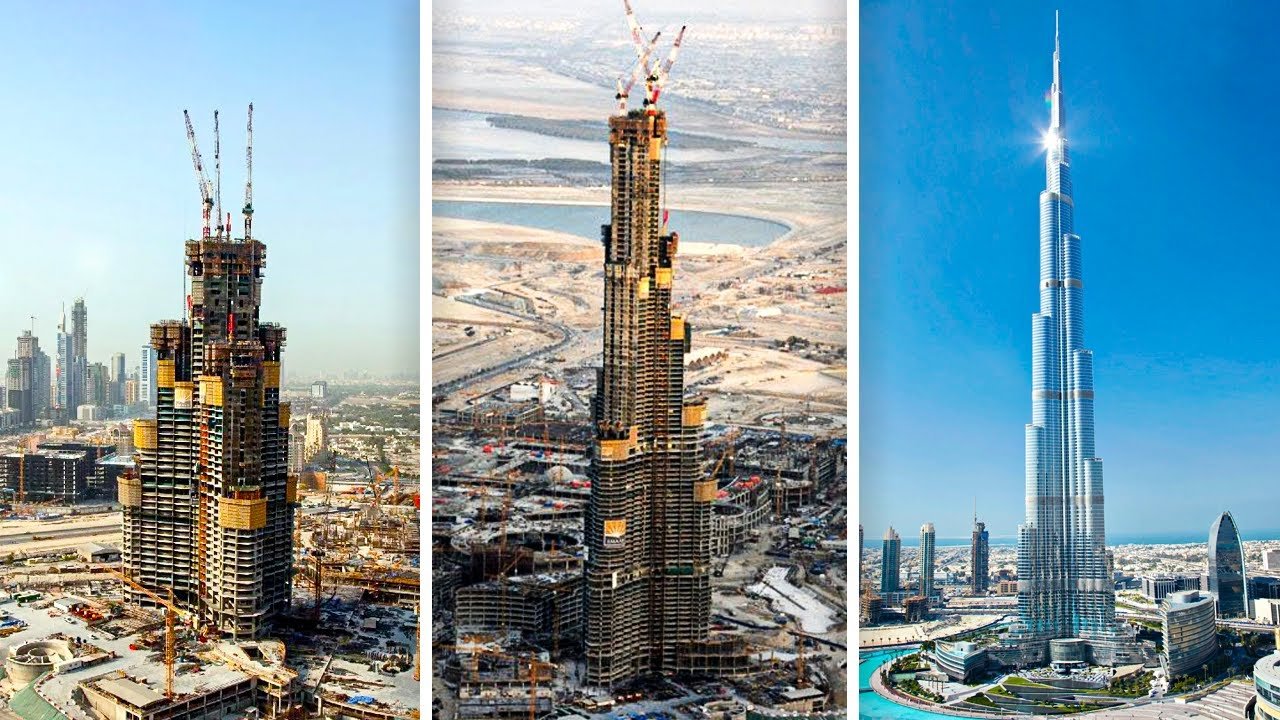 How The Burj Khalifa Was Built?: Dubai, fuelled by the wealth that comes with being a major oil hub, has grown by close to 600% in population in the last 30 years. The modern-day metropolis version of Dubai is a water-side city on the edge of the desert, full of iconic architecture and massive construction undertakings.

There’s the sail-like Burj Al-Arab, glistening, mammoth shopping malls, and the glitzy, tree-shaped island of the Palm Jumeirah. Perhaps the most iconic sight of all, though, is the futuristic Burj Khalifa, a symbol of the city, and the world’s tallest building. Join us today as we take a peek into how the Burj Khalifa was built?

The Burj Khalifa towers over Dubai at an eye-bulging 823 meters tall, or a touch over half a mile above the spectacular fountain display that graces the space directly in front of the tower.

Those fountains, incidentally, make use of water recovered from the tower’s cooling system, recycling 15 million gallons per year, or enough to fill 20 Olympic swimming pools. Like life in Dubai in general, the construction of the Burj Khalifa was fast, expensive, and groundbreaking.

The development, from breaking the earth to surpassing Taiwanese building Taipei 101’s previous record, took just 1,325 days to become the world’s tallest building (or just over three and a half years), starting with excavation in January 2004.

The final opening took a little longer, with the official launch ceremony taking place in January 2010. The bill ran to approximately 1.5 billion dollars, though that was never a major issue, given much of the space inside the Burj Khalifa had been sold ‘off plan’ before construction even began.

Intended as a centerpiece of the city, the plan for the Burj Khalifa started out with a competition between many of the world’s foremost designers, which was ultimately won by a tower structure specialist, Skidmore Architects in Chicago.

Most of the issues in the build, naturally, related to height: how to build a structure that can self-support to that level, resist the weather, and also how to physically deliver the necessary materials to the high-level building sites.

While it might not be immediately obvious to the casual viewer, the design is based on the Hymenocallis desert flower, in abstract form. Three main elements are built around a central core, with the floor space narrowing as the tower rises to provide natural stability to the tower.

The layout also offers a substantial amount of window space. The aerodynamics, in fact, is key to the Burj’s ability to withstand storms, something it achieves without measures such as the momentum-dissipation damper mechanism used in Taipei 101.

The inconsistent cross-section of the building means the forces a storm pushes into it are not evenly distributed across its height. The design – an outline like a three-pronged star – is a shape that offers strong torsional resistance, effectively preventing both twisting and bending of the structure when it needs to resist strong forces, as well as preventing the dangerous wave-like motion that can form in a more conventionally-shaped structure.

The gradual narrowing of the floors was carefully tested by computer, as well as through wind tunnels, so the elegant final shape stands out as a landmark, but also has a real functional design aimed at ensuring stability at such a height off the ground.

The construction process was colossal. An estimated 22 million man-hours were put into the building, involving people of 100 nationalities and over 12,000 different staff in total. The completed Burj contains 39,000 tonnes of steel rebar and 330,000 tonnes of concrete.

Laid end to end, the steel rebar in the structure alone would stretch a quarter of the way around the globe. 192 concrete bars dip into the earth to provide a foundation that dips to more than 50 meters below the ground.

At the heart of the foundation is a 3.7-meter thick concrete mat, the structural base on which the whole structure is built. In total, over 45,000 square meters of concrete sit in the foundations of the Burj alone.

An unlikely talking point during construction was the cranes. There were three of them, working around the clock and chunky enough to lift materials all the way up to the 156th floor of the building, a height of over 700 meters.

Specific careful plans even had to be put into place to bring the cranes back down, such as their bulk and scale. The pumping of concrete high up the building’s core, which required 200 bars of pressure, was also an engineering feat never achieved before the Burj Khalifa.

To put the scale of materials in context, simply applying the exterior cladding to the building required the work of around 300 engineers in addition to the construction crew, and broke several records in the process.

The aluminum involved is equivalent to that used in five large Boeing jumbo jets. Internally, the layout of the elevators is something of a marvel, too. The Burj uses three main ‘sky floors’, which act as hubs for the main elevators, allowing smaller ‘local’ elevators to feed other floors from these centers.

There is no single elevator that runs from top to bottom, but the central service elevator does rise over 500 meters, making it the highest single elevator rise in the world, again topping the former world’s tallest building, Taipei 101.

There are a massive 57 elevators in total within the Burj Khalifa. At the very peak of the Burj Khalifa is an iconic spire, a telescopic structure composed of over 4000 tons of structural steel.

This two hundred-meter structure was originally built within the confines of the tower and later lifted to its final position using hydraulics. The ongoing operation of the building is complex, too.

For plumbing and electrics, for example, a double-sized story every 30 or so floors provides space for the equipment needed to ensure the tower’s basic functionality. Each ‘operations’ floor provides the services needed to 15 or so stories above and below it.

These floors hold electrical substations, water tanks, pumps, and air handling units, with the pumping of water a particular issue, due to both height and the humid desert environment.

The significant amount of cooling required around the tower is in addition to the general use of water, and an entirely separate piping system was built internally to deal with that cooling liquid and condensation alone. 250,000 gallons of water are required daily to keep the Burj Khalifa functioning.

At the time of construction, all this ‘functional’ equipment was stored in the basement, and lifted by night to the less glamorous but utterly necessary floors of the Burj using a combination of cranes, hoists, and the central service lifts.

For the shiny symbol of a country, maintaining a shiny look is also important (after all, the customer’s paid for those views as well as the luxurious surroundings).

To aid with this, the tower features telescopic, permanently positioned maintenance and window-washing equipment, for what we can only imagine is one of the most hair-raising jobs in the world. The entire facade is cleaned every 3-4 months.

It can be said that the building has transformed into a community in its own right. 11 years after its opening, it still costs upwards of $100 simply to visit the top accessible floors of the Burj Khalifa and take in the view.

Staying in the Giorgio Armani-designed hotel starts at about $700 for a standard double room, though that won’t get you any higher than the 39th floor. You could try the world’s highest nightclub, on floor 144.

Incredibly, plans are afoot to beat the Burj: India is already talking tentatively about an even taller, 110 story structure in bustling Mumbai, while South Korea is also eying a possible rival.

Oh, and that urban myth about a facility to add extra floors should the height of the Burj ever be surpassed? It’s just that: a myth. But the Burj is iconic, a symbol of Dubai’s prosperity and technological advancement. Do you think it was worth it? Tell us in the comments below.

Thanks for reading till the end. Comment what’s your opinion about this information “How The Burj Khalifa Was Built?”.

1 thought on “How The Burj Khalifa Was Built?”