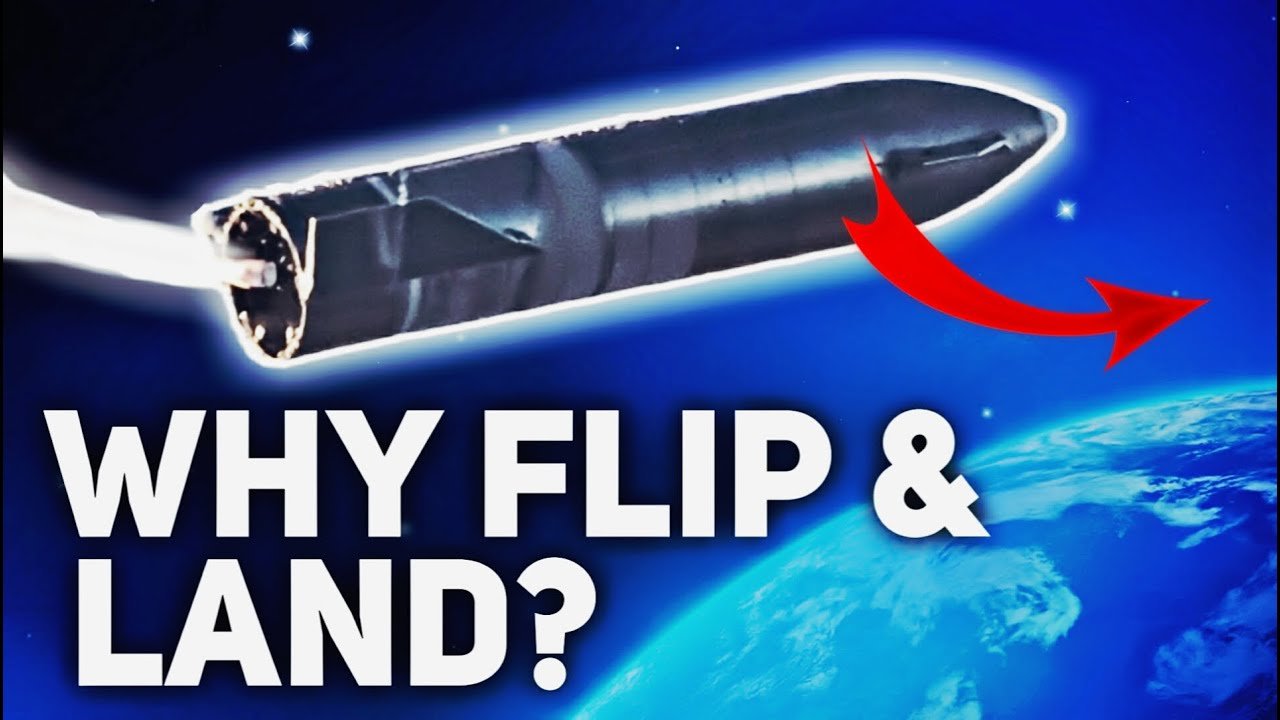 Why Starship ‘flips & land’, instead of vertical landing?: A signature move of all Starship rockets is the horizontal to vertical flip maneuver and then land. Ever wondered why does spacex uses the horizontal then flip landing maneuver for starships rather than landing vertically as they do with a very high success rate with the Falcon 9s?

What’s the point of trying to do this difficult move thing, when they have mastered the plain vertical landing. In this article, we break down the reasons why spacex is doing so. If you’re in a car on the highway, open the window and put your hand into the air stream.

First, put it sideways, then your palm into the wind. Try different positions. You will notice the force the wind applies to your hand grows linearly with the surface area you expose. So the more area an object exposes against the wind, the more force it faces.

This force is called air friction or air drag. The more air-drag a free-falling object faces against its falling direction the lower will be its terminal velocity. When a falcon-9 does a traditional vertical landing it exposes much less surface area, compared to a starship falling on its belly.

So, by falling on its belly, a starship rocket have a lower terminal velocity, slows down more easily. And slowing down really helps in landing.

You have to remember that, the starship will be traveling a lot faster than the Falcon 9 or Super Heavy booster. This is because it has reached orbital velocity, which the boosters never do.

As such, it needs to slow down a lot! Now, a starship could, in theory anyway, perform a deorbit burn over the landing site, and slow down with more fuel burning thrust in the atmosphere and land much like Falcon 9.

But, the sooner you start the flip and burn, the more propellant and oxidizer you need. This means you have to have carried more along the whole journey with you, which means you had less payload weight available.

Every kilogram of propellant or oxidizer on the starship stage is a kilogram less payload. The earlier plan would require a massive amount of fuel! So instead, spacex wants to use the starship’s air-drag in the atmosphere to do most of this slowing, save fuel and carry more payload instead.

The other reason is when reentering. Remember, the Falcon 9 never reaches orbit, the 2nd stage does, but the booster pushes it part of the way there and stays suborbital. So the fastest the booster is coming in is around 8000 km/h.

When Starship returns from orbit, it’ll be going closer to 27000km/h. If it’s returning from Mars or the Moon, it’ll be even faster. As it hits the atmosphere, it compresses the air in front of it, turning it into VERY hot plasma.

Spacex sees real potential in this horizontal gliding and then flip maneuver landing. Ultimately it is all about the most efficient way to get starship back while providing the most amount of payload capability. But, spacex is yet to master this maneuver completely.

The main problem with that rapid reorientation prior to landing is- it causes fuel to slosh around in the almost empty tanks, making it hard to feed that fuel to the engines reliably. In SN-8 this caused lower pressure in the methane header tank- causing the Rapid unscheduled disassembly.

In SN-10 they tried to solve this by adding helium pressure in the header tank. So the engine started to consume that helium. This resulted in reducing the thrust and leading to a violent landing. But, spacex has brought several changes in SN-10 to solve this.

This, flip landing maneuver is a very tricky engineering job. But, the way things are progressing sooner or later spacex will be able to solve this.

If they are successful in sticking the landing after this flip maneuver- it will make starship rockets cost less, carry more payload, and be more heat-resistant. That is the vision behind the flip landing move of the starship.

Thanks for reading till the end. Comment what’s your opinion about this information “Why Starship ‘flips & land’, instead of vertical landing?”.

6 thoughts on “Why Starship ‘flips & land’, instead of vertical landing?”