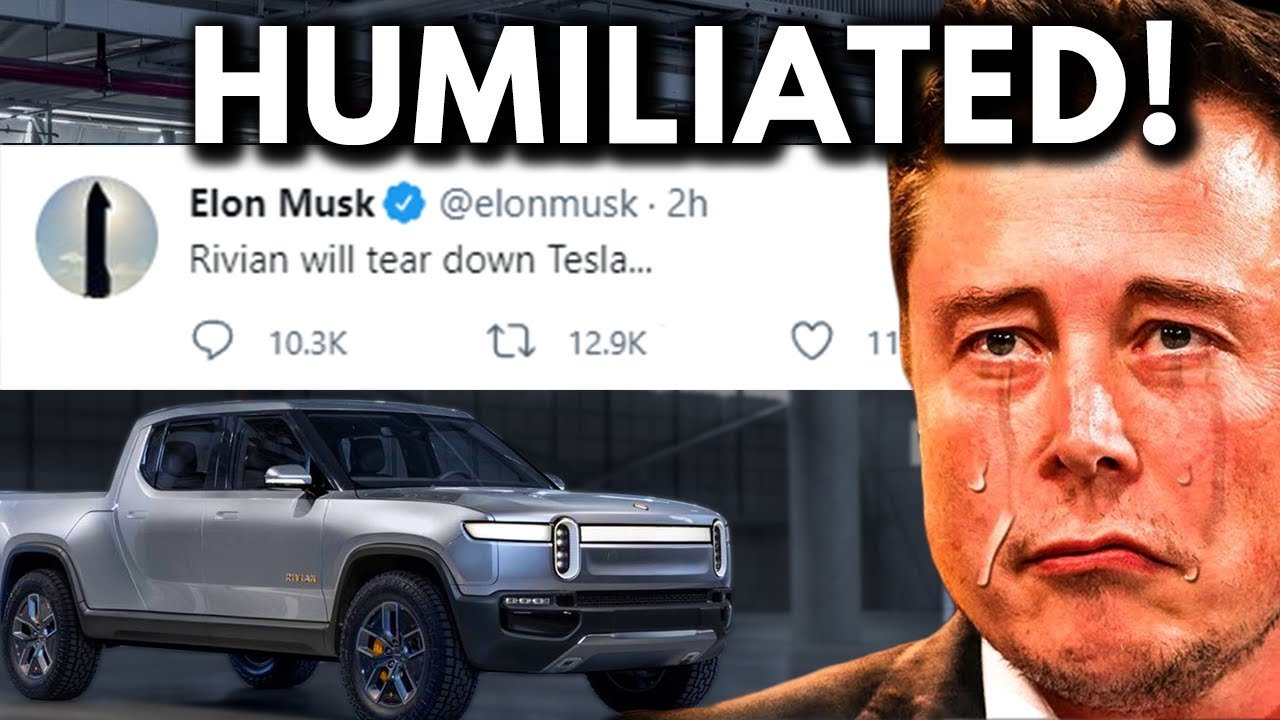 Rivian Will Be THE END Of Tesla – According To Elon Musk: With Tesla opening up their patents and blueprints for the whole world to use and learn from, all the well-known car brands have formulated their own answers to the EV demand.

One question that seems to easily be consistent among many people’s minds, however, is this: Where are the upstart companies? Like Tesla itself was in the early 2000s? Well, we have just the right answer for that.

Join us as we explore everything there is to know about Rivian Automotive Incorporated, the new direct competitor of Tesla. Introduction To Rivian CEO Robert “RJ” Scaringe launched the firm in 2009.

In 2011, it began focusing on autonomous electric vehicles after changing its name from Mainstream Motors to Avera Automotive and then Rivian Automotive. After showcasing their concepts and constructing research labs in Michigan and the Bay Area, Rivian acquired a major investment and grew rapidly in 2015.

Part of this investment was used to relocate the company to the San Francisco Bay Area in order to be closer to Silicon Valley that still houses its suppliers. Since Rivian began focusing only on electric vehicles, they began with the goal of creating an “entire ecosystem” of connected items.

Their original model was supposed to be a sports vehicle before they switched to trucks and SUVs. The R1 was a mid-engine hybrid coupe with 2+2 seating created by design director Peter Stevens for the US market.

The body was built using a revolutionary modular capsule design with readily swappable body panels. With a possible diesel hybrid variant and a racing version named the R1 GT for a Brazilian one-make series, production was expected to begin in late 2013 or early 2014.

A four-door sedan and crossover based on the platform have also been suggested. In 2011, a hatchback-like prototype was also shown off, however, its relationship to the R1 is unknown.

These plans for performance vehicles did and still do sound good but according to Rivian leadership, they eventually came to the realization that trucks and other heavy vehicles of that class could make better use of the advantages of instant torque and theoretically unlimited torque provided by electric motors.

This was combined with a realization that they would be easily able to find customers who would want such trucks and SUVs with instant torque. The Rise of Rivian Rivian was in talks to purchase a manufacturing factory in Normal, Illinois, that had previously been held by Mitsubishi Motors by September 2016.

Rivian’s decision to buy a nearly-ready facility rather than develop a new manufacturing plant has been compared to Tesla’s purchase of the NUMMI plant in California. Acquisition of your own manufacturing plant is crucial for production to roll off and actually make sales, after all.

Buying a ready facility also greatly reduced costs, and Rivian was lucky to not have to make too many readjustments to facilitate production. Investments began to pile in, and Rivian started to grow. Rivian employed roughly 100 individuals at the end of 2016, and by August 2017, that number had risen to 160.

Rivian announced in December 2017 that its alpha prototypes had been completed and were undergoing early testing. Rivian unveiled its first two models in the same month: an electric five-passenger pickup truck and an electric seven-passenger SUV, dubbed the A1T and A1C, respectively.

Both vehicles were introduced at the Los Angeles Auto Show in November 2018, and manufacturing was set to begin in 2020, with the truck being the first to hit the streets.

Both cars were touted as semi-automated and appropriate for tough terrain, with the business indicating that its next generation of models will be fully driverless. At the start of 2018, Rivian employed 250 workers.

Rivian has 750 employees as of February 2019 throughout its sites in Michigan, Illinois, California, and the United Kingdom. Around 50 of those workers were based in Normal, placing Rivian ahead of schedule in terms of local employment growth.

Rivian will employ around 3,000 people by November 2020. Rivian’s R1T Now that we’ve gotten a very clear idea of what kind of company Rivian is and where they are, let’s explore what they’re deploying in their fight against Tesla for the market.

We start with the Rivian R1T. The Rivian R1T is an all-electric, battery-powered, light-duty pickup truck that was very much a complete vehicle right from the unveiled concept stage.

The 2018 concept design was intended to be off-road capability, with 14 in (360 mm) of ground clearance, an 800HP electric motor, with the most costly vehicles being expected to go roughly 450 miles (720 km) on a single charge.

Early prototype testing revealed the vehicle could speed from 0 to 60 mph (0–97 km/h) in under 3 seconds, wade through 1.1 m (3 ft 7 in) of water, and climb a 45-degree slope, according to the business. These design goals were substantially met in the production vehicle release of 2021.

Rivian stated that the autonomous aspects of the vehicles were designed to allow “car-sharing.” The first “customer car” went off the assembly line and was delivered to a client in September 2021.

For increased range, additional batteries may be added to the R1bed. If no charging infrastructure is available, such backup/auxiliary batteries can be charged by another R1T. Rivian R1S and Amazon Delivery Van The other model Rivian has been developing is the R1S.

The R1S is a sport utility vehicle based on the Rivian platform’s first generation. The R1S design is expected to have 91 percent common components with the R1T as of 2018, thanks to a shared electric chassis.

With a battery in the middle, the chassis comprises braking, suspension, and cooling systems. Rivian’s low-center-of-gravity chassis is typical of an electric vehicle skateboard, allowing easy customization for different body forms.

It boasts power figures and powertrain configurations similar to the R1T with the ability to be adjusted for regular tarmac use, as most people buying SUVs these days do not buy for the purpose of off-roading.

Rivian’s bespoke Amazon Delivery Van design came as a surprise when it was first announced, but it was a clear sign that Rivian was going big. Amazon announced a huge purchase of 100,000 delivery van trucks in 2019, with the first cars expected to be delivered in 2021.

Amazon estimated that 10,000 electric vans would be operational by 2022 but that the whole 100,000 Rivian vehicles required under the deal would not be delivered until 2030.

All of the vans will be constructed on the same platform as the Rivian R1 vehicles, including the same basic electrical and network architecture, ECUs, and battery-pack design, and will employ a basic single-motor e-axle drive unit that Rivian will use on a future entry-level Rivian R1 product.

The van will be made solely for Amazon, using a steel frame and a “low-feature-content” production process to keep prices down. The Company At Present and The Future Following a 7.69 percent surge in stock price during early trading hours, Rivian’s $142.08 billion market worth eclipsed Volkswagen’s $139.52 billion valuations this month.

Rivian has delivered only a few hundred units of its R1T truck, the company’s first electric vehicle. However, the startup has substantial financial backing from Amazon, which reported a 20% ownership stake in the company in its most recent 10-Q filing with the Securities and Exchange Commission.

Rivian’s initial public offering (IPO) began this month at a price of $78 per share. On the other hand, the company’s shares debuted for public trade at 1 p.m. ET, trading substantially above the initial price. Shares increased by more than 60% to over $120 per share.

When they were eventually available for public trade, they settled for $106.75, which was 37 percent more than the initial value. They’re also only just starting to make money from sales, which is noted by industry observers and investors.

“(It’s) seriously mind-boggling when it hasn’t even earned any discernible revenue yet,” said Michael Hewson, chief market analyst at CMC Markets, discussing Rivian’s valuation. Clearly, Rivian has gone on a great start and will only continue to rise higher and higher.

We can also see that partnership with Amazon and the assistance provided by it will soon prove to be invaluable to Rivian’s ability to continue making the vehicles already designed alongside new designs.

Keeping in mind the kind of company Rivian plans to grow into, we can be confident that they’ll be successful in providing stiff competition against Tesla. Elon Musk would do better to upgrade his team’s game.

Thanks for reading till the end. Comment what’s your opinion about this information “Rivian Will Be THE END Of Tesla – According To Elon Musk “.